With the 8-Series Mini-LED, the hope is that TCL really can make this potential advance in LCD TV technology deliver a new level of performance for what will hopefully still be a fairly aggressive price

The latest evolution in the eternal quest for new ways of combining the brightness of LCD technology with the contrast of OLED technology goes by the name of Mini-LED.

This uses thousands more individual LED lights to illuminate the screen than you get with normal LED TVs, massively increasing the screen’s potential contrast and reducing LED technology’s traditional issues with ‘blooming’, where circles of grey light leak out around stand-out bright objects.

In 2019 TCL not only delivered the first consumer TV to sport mini-LED technology in the shape of its flagship 8 series, but even managed to sell that ground-breaking range at surprisingly affordable prices. The 65-inch model, for instance, is available at the time of writing for just $1,599.

Having achieved good critical reviews and a huge amount of attention with the 8 series, it’s no surprise to see TCL aggressively returning to the mini-LED market for 2020.

Related: Should you buy an 8K TV?

The brand hinted to me that it might even look at bringing the mini-LED approach to its mid-range 6 series. But the model we’re interested in here is 2020’s 8 series, which promises a new ‘Vidrian’ generation of mini-LED technology boasting tens of thousands of mini-LED ‘zones’ delivering (on the biggest 8 series screen sizes, at least) an 8K resolution, and mounted alongside the driving semi-conductor circuitry onto a crystal-clear glass substrate.

Using the glass substrate is claimed to improve the speed, efficiency and brightness of the mini-LED approach – so naturally I was keen to get a look at TCL’s new Vidrian sets at the CES 2020.

Two 75-inch 8-Series Vidrian models were on show – both, strangely, featuring different designs and, it seemed to me, slightly different video qualities. 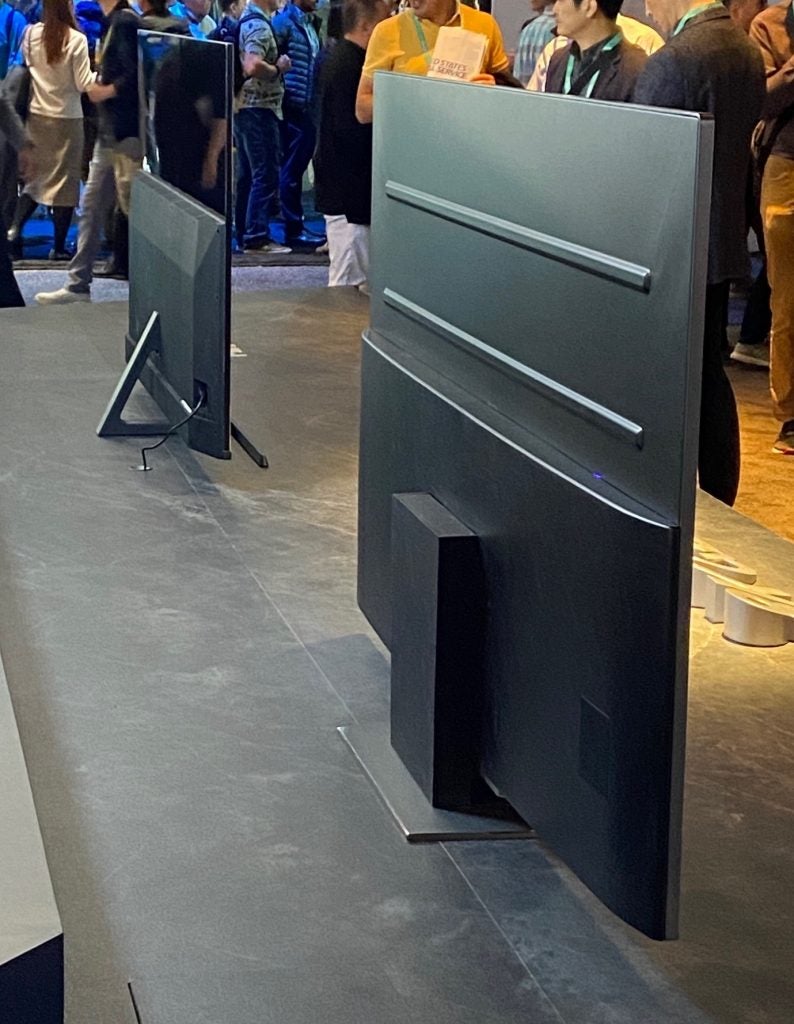 The final design for TCL’s 8K Vidrian TVs hasn’t been locked down yet. So the brand was showing two different takes at the CES.

According to TCL the difference in design is simply a result of the sets still being some months away from being released, with final styling still in the air. For what it’s worth, one design looked much more premium than the other – skinnier over much of its rear, with a glossy black finish on its rear’s upper half which chimed nicely with the glass substrate innovation.

The other looked much more plasticky, chunky and cheap – though I guess if that approach makes the Vidrian technology cheaper, many AV fans probably wouldn’t complain about it much.

Both of the prototype TCL Vidrian sets at the CES clearly revealed the technology’s contrast and brightness potential. The demo reel of video content was clearly designed to show off how the Vidrian screens can deliver deep black colours in the same frame as extremely bright highlights and heavily saturated, high-volume QLED colours without the sort of compromises associated with normal LED technology.

Even FALD screens with hundreds of zones, such as Samsung’s top-end QLED models, can’t produce such deep blacks and screaming brights in the same frame as potently as the Vidrian mini-LED pre-production units. 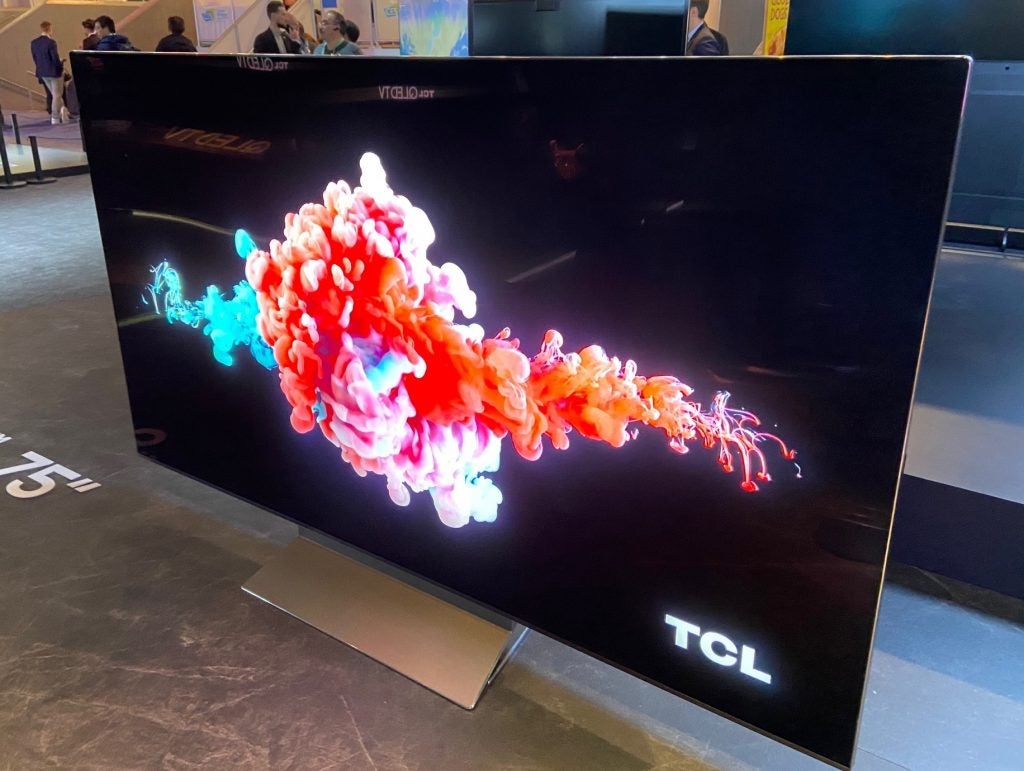 Viewing angles seemed very impressive on one of the two mini-LED samples too. Though strangely the other sample (the one with the more premium design), which was showing more ‘naturalistic’ video clips than the stark renderings on the other, did seem to lose a pretty noticeable of contrast when you moved to viewing it from the sides. Strange.

Detail levels seemed pretty good when watching the more naturalistic video footage on the more premium designed 8K prototype. That said, the content looked like it was mostly only 4K, not native 8K, and I’ve certainly seen more effective 8K upscaling from the likes of Samsung and LG.

TCL was actually showing off a new AI-based 8K upscaling engine elsewhere on its CES stand – but it seemed doubtful from the information I could find out about it that this engine would be ready in time to go into the 2020 Vidrian generation. 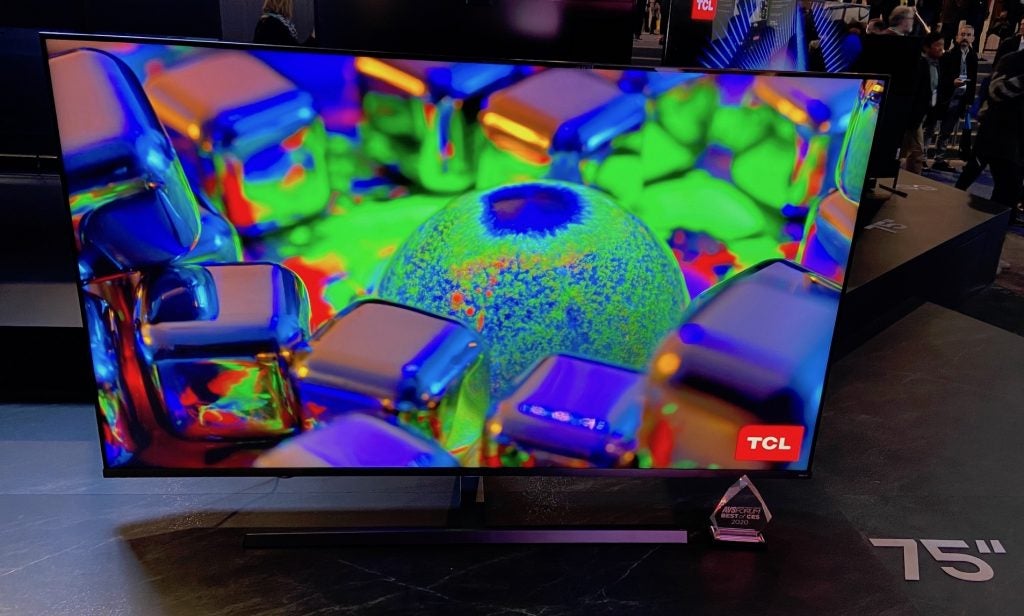 There were a couple of other concerns about both Vidrian samples, too. First, while colours were certainly spectacularly vivid and bright (especially during a video showing actual quantum dots in liquid form), they also looked a bit overblown in places. As well as making the picture look a bit unnatural, this over-aggressive look to colours led to loss of detail and some slight noise.

The other issue was that even with tens of thousands of mini-LED zones to play with, I could still see a little low-level light ‘blooming’ around the big explosions of colour when they appeared against a deep black backdrop.

To be fair, this blooming only extends for an inch or two around the bright objects, and is fairly subdued. But it’s still a touch more noticeable than I’d hoped given the mini-LED tech responsible for the pictures. I guess this just highlights just how hard it is for LED to compete with true self-emissive technology in this respect.

The blooming becomes a touch more noticeable if you’re viewing from an angle, too.

At this point, though, I need to stress that the 75-inch Vidrian 8K models on show at CES 2020 seemed to me to be in a pretty early stage of development, with likely months of tweaking and picture tuning left to do before the final products are ready to roll out.

The built-in Dolby Vision support will likely help the colour precision too, when suitable content is fed in. So for now I’m going to keep my optimist’s hat on and hope that TCL really can make this potential advance in LCD TV technology deliver a new level of performance for what will hopefully still be a fairly aggressive price.

Hopefully TCL will change its mind, too, about seemingly launching its new mini-LED TVS just about everywhere except the UK.