Fairly or not, my first reaction to the Tangent Trio is that it looks very similar to the Vita Audio range of DAB radios. They’re by no means identical but they’re obviously cut from the same cloth. Not that this is a bad thing, though.


As the 9/10, 8/10, and 7/10 scores I’ve given Vita’s desktop radios have proven, they’re a good choice of device to be associated with. And besides, Tangent actually beat Vita Audio to the punch – the Trio is about a year older than the any of the Vita range. Or at least the original Tangent DAB Table Radio is that old. The one we have here is the renamed, but otherwise identical, Trio Desktop DAB Radio which is obviously newer. Anyway, enough of this preamble. Let’s finds out if the Trio still stacks up.


Starting with those looks, there’s one other thing that immediately strikes you about the Trio; the speaker’s on the top. While undoubtedly peculiar there’s actually a great deal of logic to this. For a start, it leaves the front free to be occupied by the controls and display, allowing the radio to be shorter and slimmer than otherwise possible. Secondly, with only one speaker, you’re getting no stereo effect anyway so projecting the sound upwards helps to spread the sound out, filling the whole room with sound, rather than it just emanating from one corner. 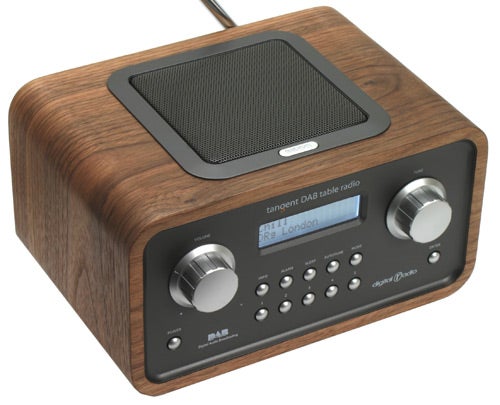 It seems to be quite effective as well, though we’d hesitate to say it’s markedly better than a conventional forward facing speaker. Also, while moving the speaker to the top does enable the Trio to be shorter and narrower than it otherwise might have been, it’s not significantly smaller than much of its competition. Indeed, we’d argue the taller stance but smaller footprint of devices like the Boston Acoustics Solo XT and the Vita Audio R1 makes more sense for a bedside/tabletop radio.


We do, however, like the overall styling and finish. The curved wooden sides are wonderfully tactile and beautifully finished and the various controls and connections are all built and fitted to a high standard. There’s also a multitude of luscious high-gloss colours to choose from, as well as the two Oak and Walnut finishes, the latter of which we’re looking at today. 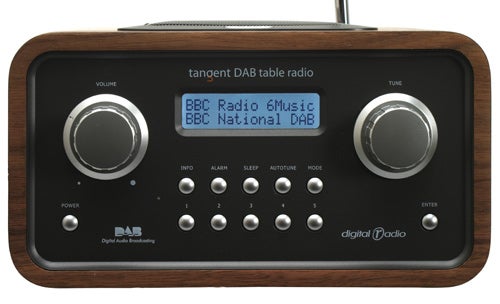 Our only other complaint on the aesthetics front would be the rather cluttered face. While the exacting symmetry is welcome, the whole effect is ruined by the superfluous model name and DAB labels. They frankly look a mess and turn this otherwise stylish ‘lifestyle’ accessory into, well, something less desirable.


Round the back, there’s the same attention to detail and quality finish that the rest of the device displays. When stowed, the antenna is neatly clasped by a retaining clip and when extended, it’s firmly held in place by the strong joint at the bottom. The reason I mention this fairly mundane fact is that many fancy radio antennas can fall down (literally) on these simple details.

Auxiliary connections are kept to a minimum with just line-out and line-in jacks and a headphone socket. We’re glad to see these all kept round the back so cable clutter is kept to a minimum when devices are plugged in. Though with the front already being a mess the aesthetic advantages of this decision is largely moot.


Furthermore, the line-in is poorly implemented. When nothing is plugged in, you can’t select it but when you plug something in it auto-switches to it. Seems fine, right? Well, yes, except you can’t then switch back to the radio without unplugging the auxiliary input. So if you want to use a dock with your mp3 player you have to unplug not just your mp3 player from its dock but the dock from the radio, every time you want to listen to the radio. 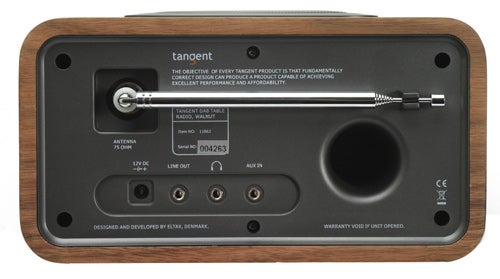 Turn the radio on and the first thing you notice is the mediocre screen. This seems to be another area where Tangent and Vita Audio have drawn from the same well of inspiration, as the displays seem to be identical, which is no good thing. Up close and straight on it’s fine but viewing angles are very narrow and the double line of information is poor compared to the multi-line displays of some competitors. Most of all, though, what it lacks is a decent clock readout that can be easily read from a distance. This ruins its potential as a true all-in-one bedside clock radio.


Ergonomics aren’t one of the Trio’s strong points either. While the majority of the buttons and other controls are intuitive and work perfectly well, the way the alarm and sleep menus operate is just odd. For a start, you have to hold down the sleep or alarm button for a few seconds to enter the menu. You then adjust the highlighted setting (on/off) with the tuning knob and press the enter button to move to the next highlighted setting (time in minutes). This process is repeated until you’ve adjusted all the settings you require. Now that may sound fairly reasonable but, trust me, it’s a very crude way of achieving such a simple task. 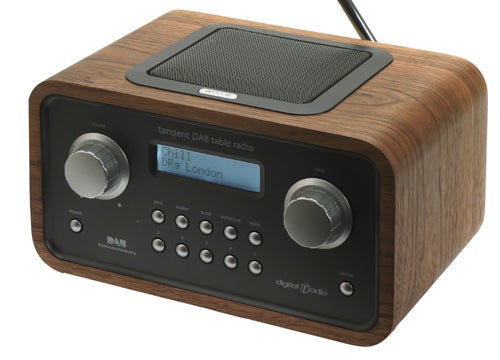 Thankfully the Trio did well when it came to the basics of finding and tuning to radio stations – after all, even the best looking/sounding radio is useless unless it can find a signal. Even in our office, which receives next to no DAB signal, the Trio was able to pick out a few stations.


So, while the Trio does the basics, I think we can safely say it’s not the perfect tabletop DAB radio when it comes to layout and ergonomics, but if it sounds great we could largely forgive most of these foibles – as we have done in the past with radios like the Vita Audio R1. Unfortunately, while the Tangent Trio does sound very good it isn’t outstanding.


Volume, clarity, and warmth are all there in abundance but the bass is just a little over-egged, which can lead to the single speaker becoming overwhelmed, making things sound muffled.


The Tangent Trio has all the makings of a worthy contender to the high-end desktop DAB radio title. However, it’s let down by too many little niggles that ultimately push it into the realms of mediocrity.