The Elio Stereo looks good, is simple to operate, comes with a host of input possibilities – and it won’t break the bank. Even-handed and composed, it sounds pretty decent, too.

The Elio Stereo is an all-in-one stereo system from Danish brand Tangent, combining music playback from multiple sources into one package.

As well as being beautifully alliterative, the concepts of “cosiness, comfort and conviviality” are well worth aspiring to. The Danes know this better than most – after all, the Danish word “hygge” encompasses all of those feelings.

And while it may be a bit of a stretch to credit Danish audio brand Tangent with any kind of monopoly on hygge, there’s no doubt a stylish, compact, well specified and affordable all-in-one stereo system is capable of serving up a sensation of contentment. As long as it’s done properly, of course.

Elio Stereo is Tangent’s attempt to serve up all those positive C-words without getting bogged down in ‘costly’. So can putting £399 Tangent’s way deliver the warm fuzzies without breaking the bank?

So prevalent is the Danish reputation for design, we were expecting great things on unboxing the Tangent Elio. In truth, while there’s very little wrong with Elio Stereo’s looks, you’re unlikely to see it take centre stage in the Design Museum any time soon.

At 14 x 43 x 25cm (HWD), it’s as wide and deep as any number of bog-standard hi-fi separates. However, it’s little taller than most. Five of its six surfaces are covered in textured vinyl wrap, while the “face” is aluminium-clad. 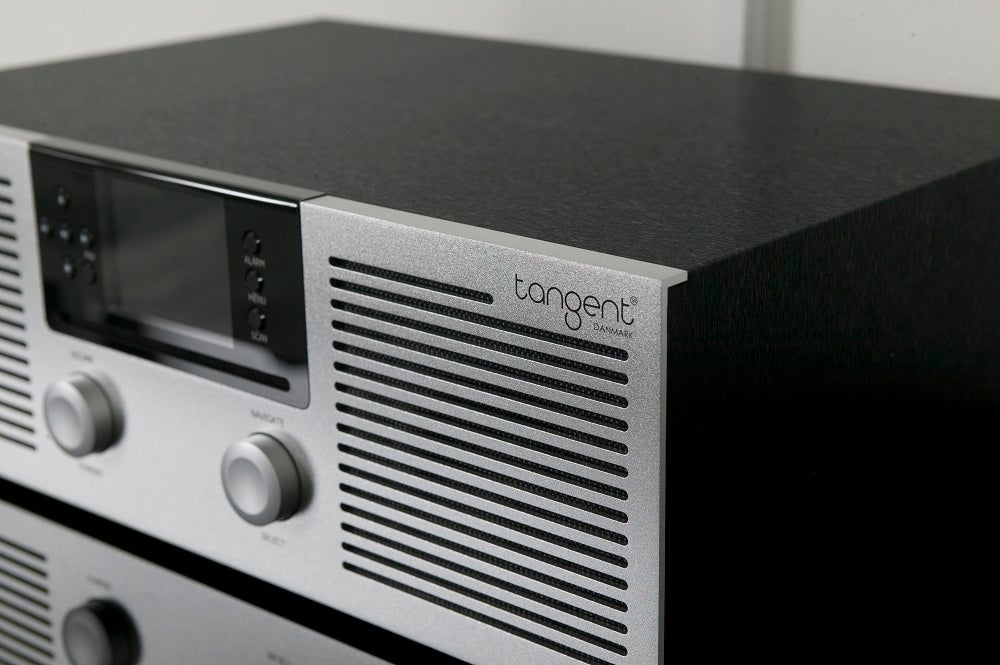 There are assertive cutaways to allow the two forward-facing full-range drivers to express themselves, and between them is a full-colour display above two turn/push controls controlling power, input selection, menu navigation and volume.

From a distance, the Elio Stereo could easily be mistaken for a much more expensive product – something in Ruark territory, perhaps. Up close – closer than you’d want to be for listening, certainly – that impression fades a little. Nevertheless, the Tangent remains a good-looking device. It just isn’t quite as tactile or luxuriously finished as some pricier alternatives.

The term “all-in-one” is used pretty liberally these days, and not every all-in-one has everything you need in one box. The Tangent Elio Stereo, you’ll be pleased to learn, is the real deal.

Power is rated at 20W per channel, and is delivered by class D amplification. It drives a pair of 76mm full-range front-firing drivers, and these are bolstered in the lower frequencies by a couple of rear-venting bass reflex ports.

Your options for getting music into the Elio Stereo are numerous. For instance, sitting between the display and the control buttons there’s that most retro of features: a CD slot. The Tangent can play MP3-encoded discs as well as regular CDs. Or you could stream from your mobile device using Bluetooth (the Elio is 2.1-equipped, which is hardly at the cutting-edge but is, at least, proven).

Perhaps you’d rather listen to internet radio. If so, the Tangent has you covered with its mediaU tuner. Or you might use the integrated Wi-Fi to access your network-stored audio via DLNA or UPnP. Maybe you fancy a bit of broadcast radio action via the FM, DAB or DAB+ tuners. 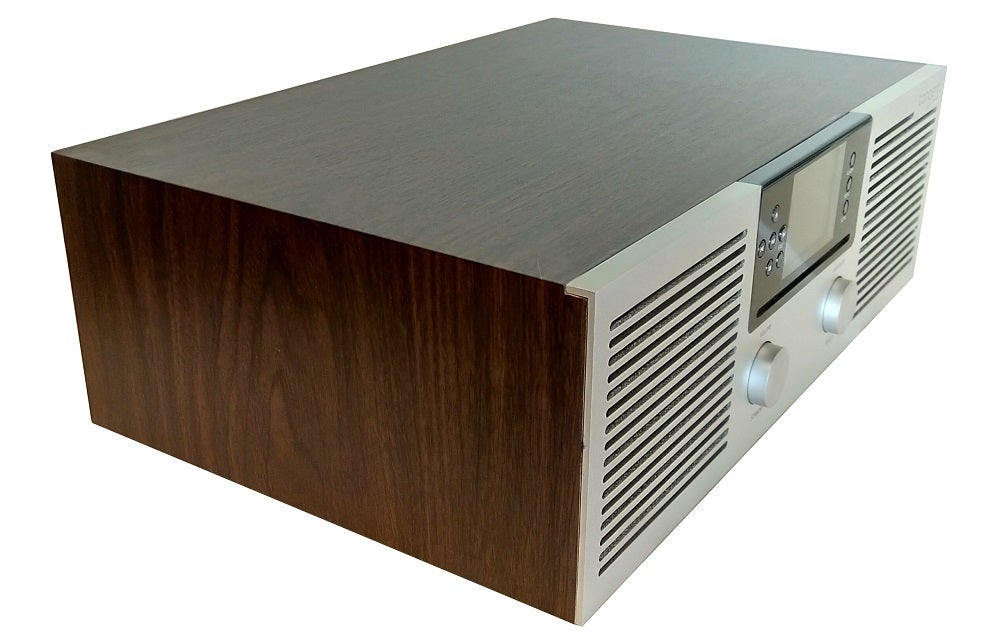 Spotify Connect is available, too, if you’re a subscriber to the world’s most popular music streaming service. And if all the wireless access seems a bit much, there are both USB and analogue 3.5mm inputs on the back of the unit for some old-school hard connectivity. There’s also a line-level 3.5mm output on the rear in case you want to deploy a pair of headphones.

In truth, it’s difficult to know what else you might reasonably expect your £399 to buy. At this sort of money, the Tangent Elio Stereo is as “all-in-one” as it gets.

The Elio Stereo is supplied with a small, useful remote control handset. It doesn’t feature too many buttons, none of them are too small and it’s laid out pretty logically. As such, it’s a sight better than numerous remotes supplied with some more expensive alternatives – so that’s a good thing.

It’s also possible to navigate the Tangent using the two fascia controls and the display. The buttons feel reasonably well weighted and are decently responsive, while the display itself is colourful, fairly sharp and gratifyingly legible. Niceties such as the ability to switch between an analogue and digital clock display, or to have weather information displayed when the unit is in standby, are very welcome too.

Of course, there are some operational features you’ll have to go without. For example, voice control is nowhere to be seen (or heard) and the control app, mediaU’s AirMusic Control, is just shy of worthwhile. But context is everything, of course – and in the context of a heftily specified £399 all-in-one unit, the Elio Stereo interfaces are perfectly satisfactory.

Starting in the most hands-on manner possible, with a CD of the 50th anniversary MQA remaster of The Doors’ The Soft Parade, gives the Tangent the chance to explain quite a lot about the way it goes about making music.

It concentrates on the broad strokes; it doesn’t become too anxious about the finest details going astray. Instead, it delivers the overall flavour and drive of music. And, in a product of this type, with this sort of power at its disposal and the likelihood of its being positioned somewhere less than optimal, that’s entirely sensible. 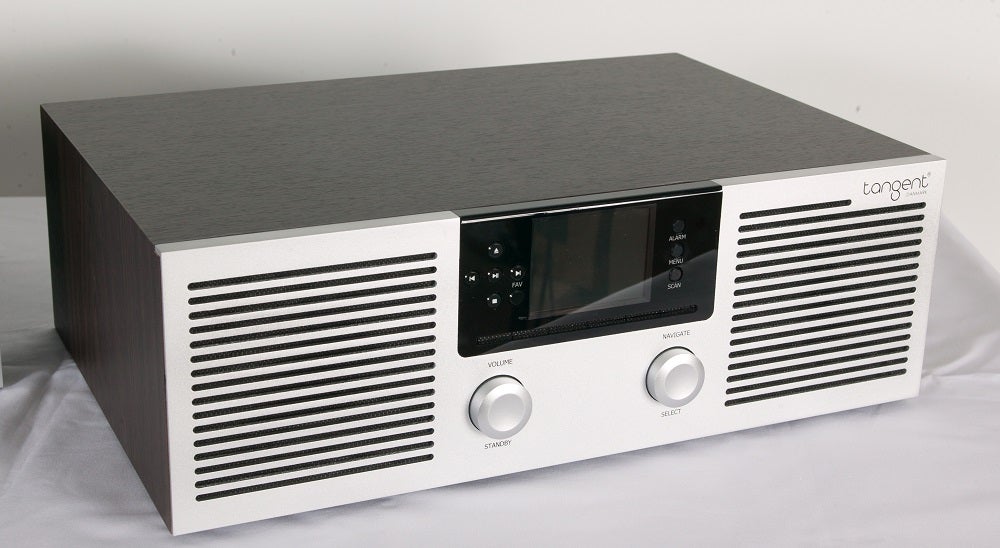 There’s reasonable heft and presence to the lowest frequencies – they’re reasonably well controlled and don’t think about overstaying their welcome. The mid-range is distinct and quite spacious; in fact, the Tangent’s overall presentation is quite a bit more spacious and open than its configuration might suggest. And the top-end, while blunter than is ideal, fights effectively against harshness or hardness, even at fairly impressive volumes.

There isn’t much dynamism on offer. Everything seems to happen at a fairly uniform volume, with little in the way of dynamic variance. But the Elio Stereo has the talent to remain composed at volume, and doesn’t become flustered or shouty. 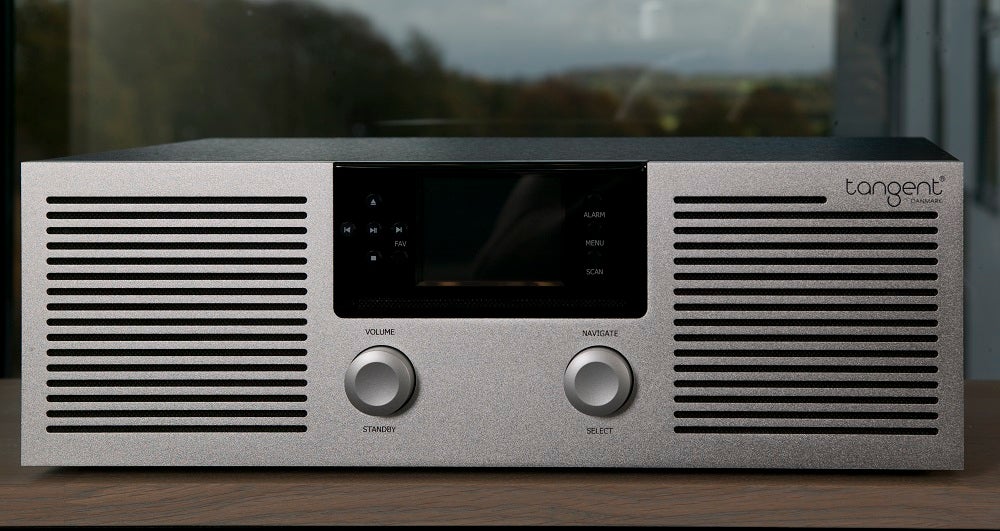 A listen to Taylor Swift’s Paper Rings via Spotify Connect demonstrates the Tangent’s turn of pace and ability to maintain proper unity of a performance. Even a compressed file of a song that’s been mastered specifically to endure compression sounds a bigger than the Elio’s cabinet, and the music hangs together. The vocal occupies almost the entire front of the soundstage, but it never gets overbearing.

Broadly speaking, each digital input enjoys similar tonality. Tangent is coy about the specifics of the DAC fitted to the Elio Stereo, but if its Bluetooth standard is anything to go by then it won’t be anything special.

Nevertheless, whether it’s be-bop via Bluetooth or Underworld via USB, the Tangent is an engagingly consistent listen. It doesn’t have the grip or command to make the best of a lush “hi-fi” recording – but, equally, it doesn’t butcher poor tunes either.

Should you buy the Tangent Elio Stereo?

Convenience (and plenty of it, at the price) is the reason you’d consider the Tangent Elio Stereo. For the money it looks good, is simple to operate, offers a whole host of input possibilities, and it won’t break the bank. There’s a lot to be said for the sound it produces, too, mostly concerning how even-handed and composed it is.

There’s an obvious alternative is Denon’s deathless D-M41DAB. No, it isn’t a true all-in-one (its all-in-one box of electronics comes with two external speakers) – and no, it isn’t quite as generously specified as the Tangent. But it’s cheaper and the sound from its fewer inputs is genuinely accomplished.

The nearest like-for-like product around is probably Revo’s handsome SuperSystem. Another £100 or so on the price of the Elio gets an all-in-one that looks superficially similar (but is ultimately a nicer-feeling object), but one that goes without a CD player. It has scale and dynamism where the Tangent goes without, mind you – it’s rather a swing-and-roundabouts decision.

The Tangent Elio Stereo deserves to be part of any discussion you’re having around products of this type, however. It’s capable of inspiring any amount of positive vocabulary, in any language.