The simple DAB radio is in its twilight years. The first DAB radios appeared in the UK almost 15 years ago, and these days most radios pack-in wireless connectivity, streaming and other technophobe-confusing doodads. The Tangent DAB 2GO doesn’t. It’s a simple and pure DAB+ and FM radio, perfect for the kitchen or bedroom. But is it too late to the party?

Like the most popular DAB radios, including the Roberts Revival and Pure Evoke models, the Tangent DAB 2GO has a slight retro flavour. All knobs and buttons rather than touchscreens, and with an entirely monochrome display, the Tangent flies the banner for the traditional DAB radio.

It’s also a very traditional size. Lunchbox-like in shape, and with a chunky metal carry handle, the Tangent DAB 2GO is equally at home on a worktop as it is taken out to the park for a picnic. You will, of course, need some battery power to get the radio working when not connected to the mains. 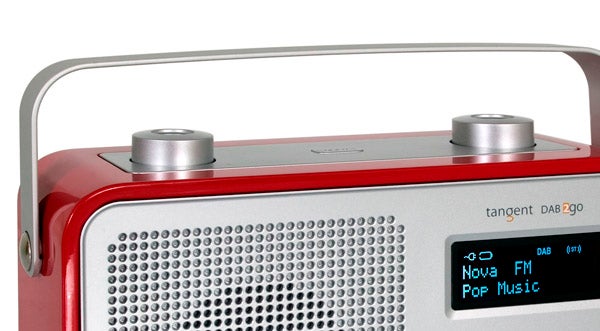 On the Tangent DAB 2GO’s rear panel is a screwed-down plastic cover for the battery compartment. Unlike Pure’s DAB radios, the Tangent does not use a custom battery pack but six AA batteries. It will charge rechargeable batteries, but warns that the power cable shouldn’t be plugged in if using non-rechargeables. For fear of burning down Trusted towers, we didn’t test to see what happens if you do.

Tangent offers a fistful of different shades of finish for the DAB 2GO radio. The white and black editions are ever-so slightly cheaper than the coloured models, which command a £10 premium. This must be down to basic production costs as the materials used are not radically different.

The front and back panels are matt plastic, and the curvaceous sides high gloss plastic, styled in a way that makes it look like lacquered wood. Its carry handle is not an impersonation, though, made of a band of aluminium. The Tangent DAB 2GO isn’t quite as striking or carefully constructed as the Roberts Revival, but let’s not forget that this one costs around £50 less. And some of the coloured models are really quite cute.

The Tangent DAB 2GO offers a solid array of basic features. A simple DAB and FM radio is never going to be able to do too much, but on the rear you’ll find a headphone output, line out, auxiliary input and a USB port. This last one is somewhat unusual – it lets you charge the batteries via a USB cable. 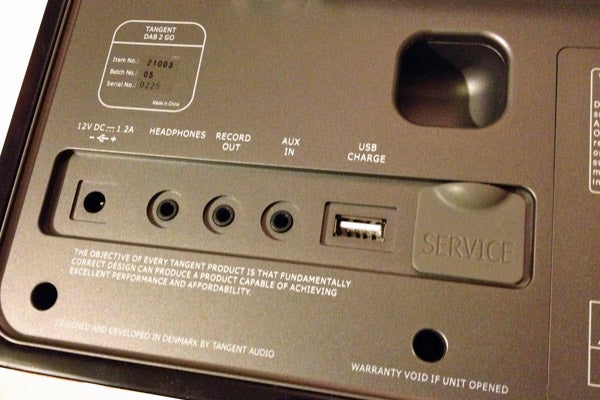 Tangent doesn’t include any batteries, but doing the maths, letting you use standard batteries saves you money. Six high-quality Eneloop batteries can be had for under a tenner. Pure’s custom battery packs cost around £30.

The Tangent DAB 2GO radio uses a generic DAB radio interface, similar to that seen in Pure DAB radios. The display is a two-line monochrome affair, and most of the time you’ll only need to use the two top control knobs to get the station you’re after.

The left controller handles power – it’s a push-down button too – and volume, while the right selects a station. Alternatively, there are five buttons on the Tangent DAB 2GO’s front plate that let you store five presets for each tuner (DAB and FM). There’s no menu access to further presets, making this simple even among its DAB radio rivals. However, gadgets don’t get much easier to use than this.

There’s just one additional feature – the alarm. You can set two separate alarm calls, whether they happen once, weekends or every day, and have a choice between FM, DAB or a buzzer tone as your wake-up sound. What really makes the Tangent DAB 2GO great as a bedside buddy, though, is the snooze button up top. It’s embossed to make using it blind easy, but not so big that it ruins the tasteful looks of the radio. Nice work, Tangent.