A big improvement over the last router, the TalkTalk Wi-Fi Hub is a quick – if not slightly basic – wireless router.

What is the TalkTalk Wi-Fi Hub?

For most people, their router is the one that ships with their broadband connection. While most ISP’s have upped their game, providing faster and better models, we weren’t overly impressed with TalkTalk’s last effort: the HG633 Super Router. The TalkTalk Wi-Fi Hub aims to change this, with faster Wi-Fi and Ethernet ports.

The TalkTalk Wi-Fi Hub has a simple design with a spring-out stand that holds the router firmly in place. Gone are the array of lights from the old router, to be replaced with a single bright-white status light. If you don’t want this disturbing you, you can just turn it off in the router’s settings.

At the rear are four Gigabit Ethernet ports (a step up from the speed-limiting 100Mbps ports of the Super Router), plus an Ethernet WAN port and VDSL connector, so you can hook up the router to a modem or plug it directly into your phone line, negating the need for a second box. 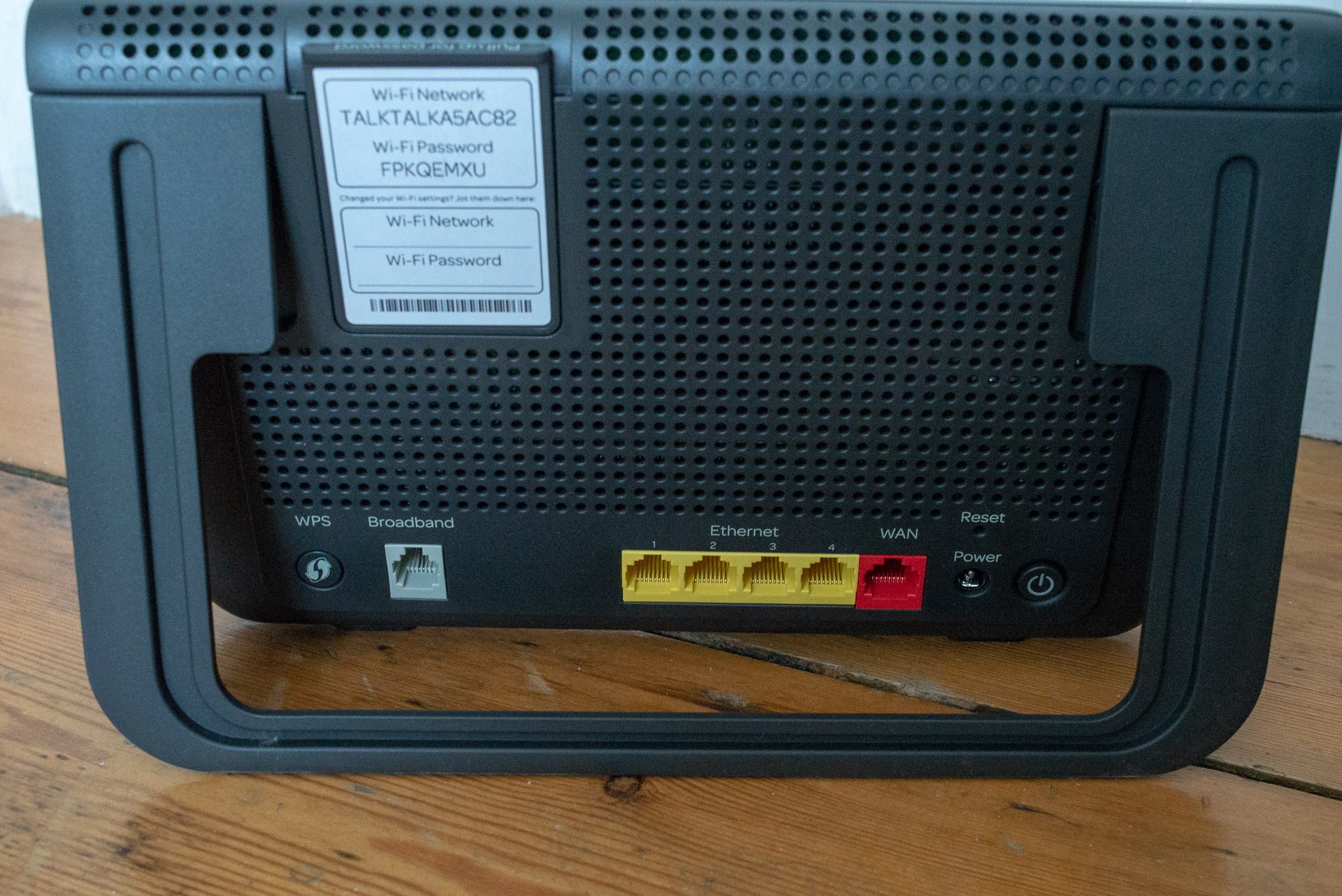 You’ll also find a WPS button on the rear for quick Wi-Fi device connection, plus a reset button should you want to put the router back to default settings.

As seen on BT’s routers, TalkTalk’s model now sports a pull-out plastic tab that contains the router’s default Wi-Fi name and password. Cleverly, there’s space to add your own settings should you want to change the defaults. As with most ISP routers, the Wi-Fi Hub’s web interface is exceptionally basic, with many of the settings hidden from view. The idea is that you get the router, plug it in and it just works.

To that end, the dual-band 802.11ac Wi-Fi networks use the same name and password. The Wi-Fi Hub then uses band-steering to send devices to the right network band (2.4GHz or 5GHz) based on ability, range and performance. 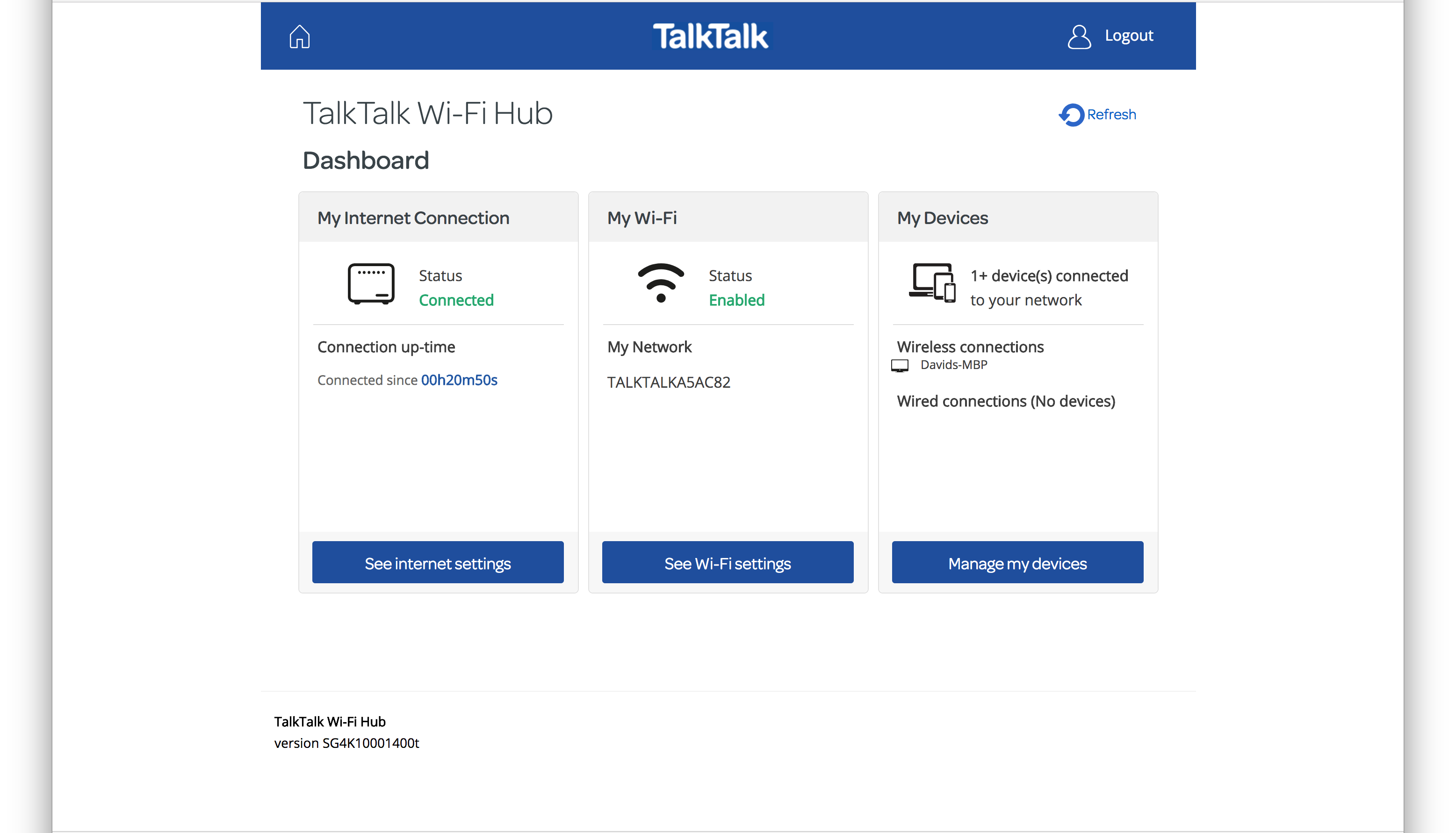 Some of the settings are more basic than on other routers. For example, you can’t change the DHCP server settings to use alternative DNS server addresses, which can improve the reliability of internet connections. That’s pretty standard for an ISP router.

By default, the router is configured to work with live-streamed YouView channels, such as Sky Sports, so you can use the router with TalkTalk’s TV packages. That’s good news, since many third-party routers don’t play nice with YouView.

Specs-wise, the TalkTalk Wi-Fi Hub has top-level wireless, supporting 802.11ac Wave 2. The AC2200 rating gives a theoretical throughput of 1733Mbps on the 5GHz band and 217Mbps on the 2.4GHz band. The router uses 4×4 MU-MIMO with Beamforming, which should mean that when using multiple bandwidth-hungry compatible wireless devices, you get faster throughput. 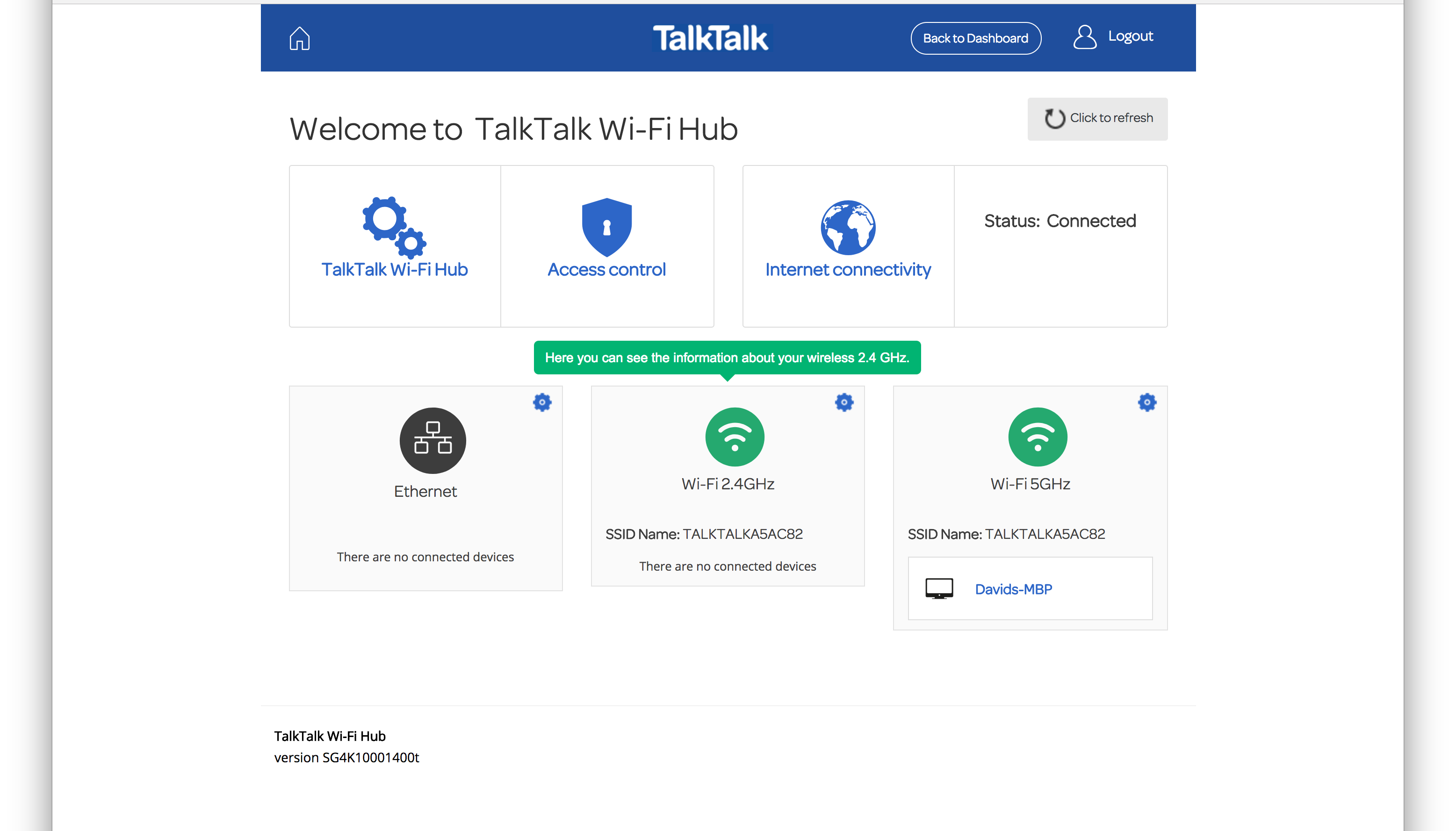 So, how good is the router? Testing with the free TamoSoft Throughput Tester, using one wireless and one wired device, the TalkTalk Wi-Fi Hub proved to be super-fast.

At close range, the TalkTalk Wi-Fi Hub certainly has the speeds to keep up with the best third-party routers, but it starts to slow down at range. 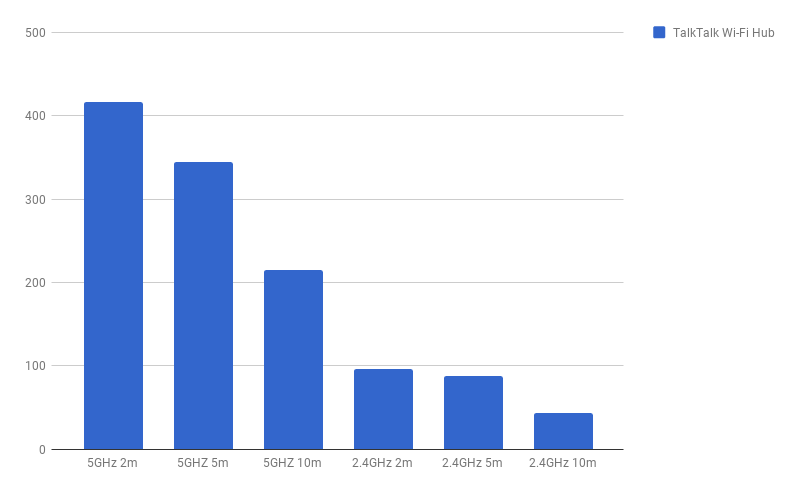 From my tests, the TalkTalk Wi-Fi Hub is a decent performer, but it suffers a little at range.

Why buy the TalkTalk Wi-Fi Hub?

New Faster Fibre broadband customers will get the TalkTalk Wi-F Hub for free. Given that this router is now around the equivalent of the BT Smart Hub, it’s a decent enough ISP router.

Most existing customers can upgrade to the Wi-Fi Hub for just £30. If you’ve been bumbling along with an older TalkTalk router, then £30 is a very good offer for a fast router, particularly if you don’t worry so much about super-long ranges.

If range and overall coverage are more important, a mesh system could be a better choice – such as the excellent BT Whole Home Wi-Fi. This system plugs into your existing router, providing strong wireless everywhere.

Finally, the TalkTalk Wi-Fi Hub can be bought outright for £120. At this price, the router isn’t overly expensive, but you can buy more fully featured third-party routers for less, such as the Linksys EA7500 Max-Stream MU-MIMO.