What is TalkTalk TV?

As is the case with its main rival, BT, TalkTalk’s TV service is an add-on for broadband customers. Via the YouView-based set-top box, TalkTalk TV delivers a combination of free-to-air channels using Freeview HD and a range of on-demand and live-streamed premium content.

TalkTalk’s YouView set-top boxes are manufactured by Huawei. The standard TV box is 23cm wide, has a single tuner and no hard disk. The TV Plus box is 30cm wide, includes dual tuners and a 300GB hard disk for recording TV; this is the model that I tested for this review.

The TV Plus box is a little larger than BT’s box, but that’s hardly a problem, since the set-top box is no bigger than a traditional PVR. I quite like the curved front and plain front panel, which let the box blend in with my other AV kit. Build quality is top-notch, with the set-top box feeling robust and sturdy.

Around the rear are the standard outputs, including optical S/PDIF, HDMI and Ethernet. You’ll need to use the Ethernet port since, once again, this is a YouView box that doesn’t have integrated Wi-Fi. For the few folk who actually still use one, a Scart socket also features. There’s one input and one output for an antenna, so you can pass through your aerial’s signal to TV. 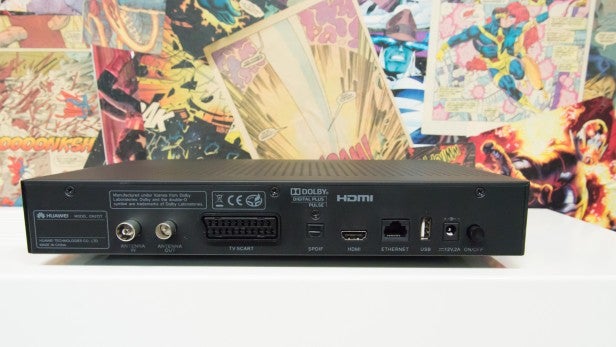 A simple remote control is bundled, providing all of the usual YouView features, plus there’s a dedicated button to jump straight into TalkTalk’s own content. 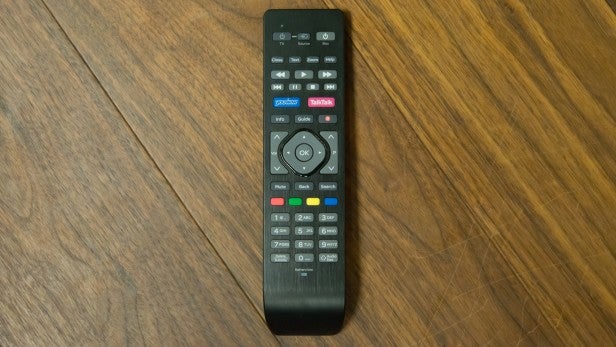 TalkTalk’s YouView box was the first to receive the Next-gen update, and it makes a big difference. The original YouView interface was becoming a little tired and often required you to jump through lots of menus to access anything. With Next-gen, a concerted effort has been made to make the interface more visual and easier to access.

Bring up the YouTube main menu, and you’ll see that the Guide option now highlights several programmes that are on currently, complete with thumbnail previews. You no longer have to dive into the actual Guide or use the old text-based Mini-guide. 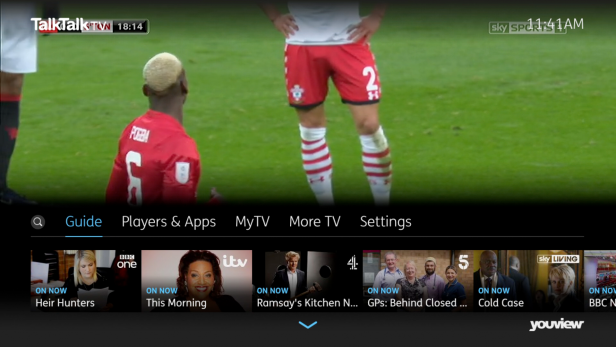 Likewise, MyTV (your recordings) shows you recently recorded shows; Players & Apps provides quick access to most popular apps; and More TV displays thumbnails for shows that you may be interested in, either live or on-demand. 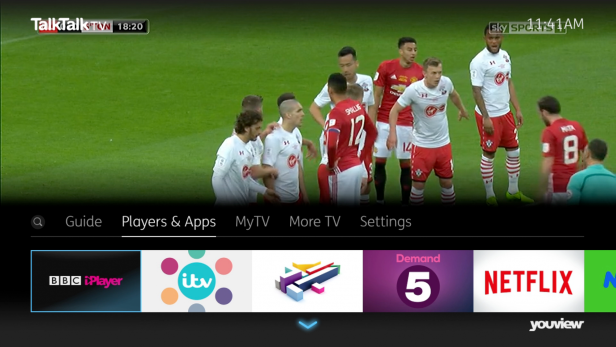 YouView has revamped the Guide, too. It’s cleaner, easier to read and lets you navigate by category (HD, Subscribed, Entertainment, Children’s, News, Sport, Films and Factual & Lifestyle). As before, YouView lets you step back in time and watch programmes that have already been on, with the set-top box launching the required player automatically.

Annoyingly, the mini TV preview window has gone, so you can’t carry on watching. To try to compensate, YouView has made the entire interface transparent, but I couldn’t see anything clearly. In fact, I think it’s better to turn off transparency to make the menus easier to read. 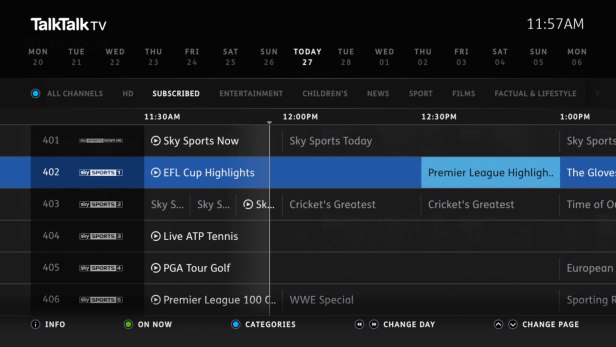 A more successful change is the new MyTV page. Gone is the old-fashioned text list of recordings, replaced with an image-driven thumbnail display. It makes finding your recordings much easier. Sadly, if you delete a recording, you can’t undelete it. I’d love to see an undelete option implemented, just as in Sky Q. Aside from those minor niggles, the Next-gen interface is a big step up from the old, and far quicker and easier to navigate. Related: YouView 2.0 Update: What’s new and why should you care?

Via Freeview HD, you get all of the free-to-air UK channels. YouView also provides all of the on-demand content from the main UK channels (iPlayer, ITV Hub, All 4, My5, KTV Play and Milkshake). There’s also Netflix, which you can pay for directly through your TalkTalk account if you haven’t signed up yet.

This is all standard YouView, but TalkTalk offers monthly TV boosts. These layer in premium TV channels that are delivered via your broadband connection, but appear as ‘normal’ channels in the Guide. Disappointingly, all these channels are delivered in standard definition (SD), with no HD options available. BT has HD streamed channels and, with the top-end box, BT Sport in Ultra HD.

Still, TalkTalk’s range of available content is arguably better than that of BT. 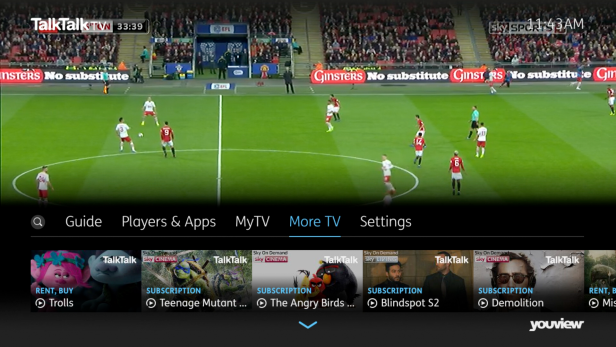 In addition to Sky’s content, TalkTalk also has extra packs, offering channels that BT doesn’t offer. These range in price from £5 a month to £12 a month, and include Sky 1, National Geographic, Disney and Sky Arts.

If anything, the real problem for TalkTalk is Sky’s own Now TV service, which is available on YouView in SD only. Although you can’t record these shows, Sky Now’s Cinema pass is cheaper (£9.99 a month); the Entertainment pass, which provides plenty of on-demand content and Sky Atlantic, costs just £6.99 a month. TalkTalk’s Sky Sports package remains cheaper, though.

TalkTalk is relatively expensive if you want BT Sport. With BT you get its sports channels for free, but TalkTalk charges £22 a month with a £30 activation fee for 12 months. That’s the same price as for Sky customers, but it remains a significant sum to pay.

Tap the TalkTalk button on the remote, and you jump to the MoreTV section, where you can manage your TV boosts. You can also buy and rent movies using the TalkTalk TV Store (previously, Blinkbox), which isn’t available on other YouView platforms. The range of content, from the latest movies to TV shows, is excellent and everything is well priced. It’s neat that you can then carry on watching on other devices, too. 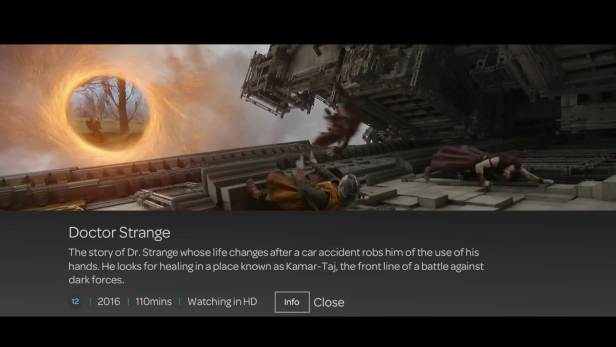 One of the complaints levelled at TalkTalk’s YouView TV Plus box is that the interface wasn’t particularly smooth. With the Next-gen YouView interface, performance has improved, and I had no problem moving around the interface.

The only minor lag evident was when the box was pulling in preview thumbnails from the internet.
With the TV Plus box’s 300GB hard disk, there’s enough space for 185 hours of SD content or 60 hours of HD. That isn’t much; BT’s standard box offers 300 hours of SD recording, while the Ultra HD box provides 600 hours. 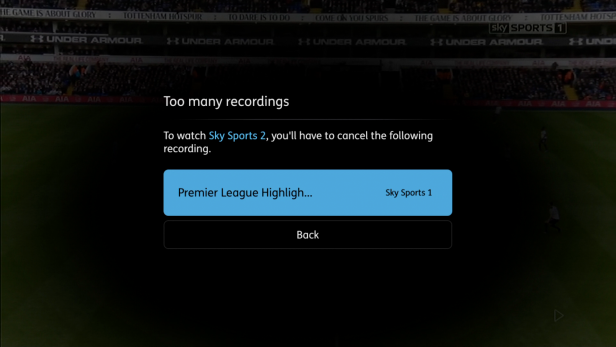 Should I buy TalkTalk TV?

It all comes down to the type of TV you want and the channels that you care about. For those who want the widest range of premium content, and the most HD (or Ultra HD) channels, Sky Q is the best bet. For those who dip in and out, and just want the occasional bit of content, a Now TV box and subscription works out better value.

If you’re after a little more TV than you get with Freeview, plus the option to add in premium content as you like, a YouView TV service makes sense. BT’s advantage is a greater number of HD channels, the option of Ultra HD and free BT Sport. If you don’t care about sport, BT’s service is considerably more expensive.

That leaves TalkTalk TV in a neat, niche position, where it’s the value option. This isn’t a bad thing, since TalkTalk has more channels overall, plus its packages are cheaper. For example, a TV Plus box costs £25 upfront with a £5-a-month charge that nets you six Sky channels (Sky 1, Sky 2, Sky Living, Sky Arts, Sky Sports News HQ and Real Lives). BT’s comparable entry-level package costs £10 a month, with no set-top-box charge and bundled BT Sport in SD.

A well-priced TV service with flexible contracts, TalkTalk TV is excellent value, particularly for existing customers. A greater number of HD channels would be nice, though.