What is the TalkTalk Super Router?

This is TalkTalk’s big jump into 802.11ac WiFi and after the desperately poor Plus Fibre router it can’t come soon enough. On paper TalkTalk has done a good job too with few obvious signs of the shortcuts made by most ISP-supplied routers. Then again it is also tempting faith with the choice of name.

‘Utterly unremarkable’ is the term that comes to mind when looking at the Super Router and it certainly doesn’t suggest there is anything ‘Super’ about it. That said on closer inspection it is nicely made, minimalist and the matt black finish (which looks lighter in the flesh than the press shots portray) feels good and resists dust and fingerprints. In short: it will go about its business without demanding to be the centre of attention and that is what most people will want.

Where the Super Router does edge closer to its title, however, are the specs. TalkTalk has performed a two generation jump with the Super Router, adding both 802.11ac and 802.11n 5GHz bands on top of 802.11n 2.4GHz seen in the misleadingly named ‘Plus Fibre router’ (it struggles to achieve Fibre speeds over wireless at anything but close range).

Furthermore this is a 3×3 antenna array with Beamforming, which suggests good things. Our only caveat being the ISP is keeping a lid on who makes the router and that sets off some alarm bells. 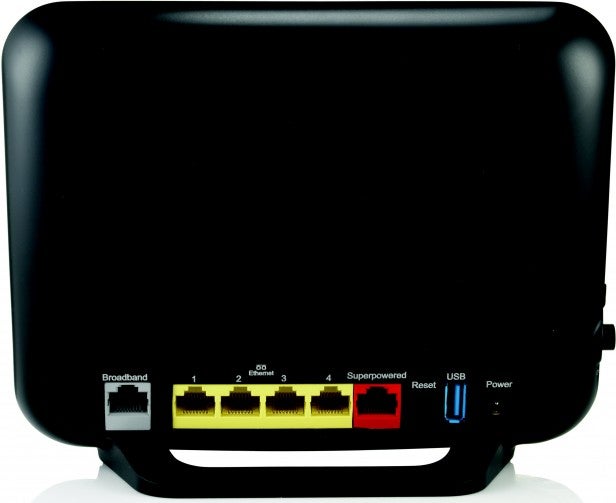 Elsewhere though there are additional reasons to be positive. Unlike the EE Bright Box 2, it features four Gigabit Ethernet ports and Gigabit WAN placing it alongside the superb BT Home Hub 5 and 802.11n 5GHz limited Virgin Media new Super Hub (yes, these names!). It also blows the woeful 802.11n 2.4GHz limited Sky Hub and its four Fast Ethernet ports out the water.

In addition TalkTalk has equipped the Super Router with a USB 2.0 port for sharing a printer or external storage and there’s DLNA, UPnP and WPS, WPA/WPA2 security for good measure. As ISP-supplied routers go, it looks promising.

Things also stay on track with the setup. Plug in and connect to the Super Router and it follows the example of Linksys and Asus in automatically opening a browser window and guiding you through the setup. If you haven’t managed to establish an Internet connection there is also a graphically illustrated guide stored offline, which is smart.

But TalkTalk does lose points on two accounts. Firstly the router settings password is set to the usual username/password combo of admin/admin which anyone will guess (my review unit didn’t prompt me to change it, but apparently retail versions will). Secondly TalkTalk merges its 5GHz and 2.4GHz bands under the same SSID.

The latter is a particular bugbear of ours and a hateful practice which is thankfully being phased out by most router makers. The argument for is you keep things simple and don’t confuse the customer. The (far bigger) problem against it is you can’t choose which band your device connects to and therefore there is no way of knowing if your shiny new 802.11ac laptop/tablet/phone is stuck on doddery, old 802.11n 2.4GHz.

This can be changed in the settings, but it is a faff to find and doesn’t allow for natural language SSIDs so you have strict length and character limitations.

The good news apart from that is the UI itself is clear and logical. It doesn’t borrow from one of the major router manufacturers either, which a) means TalkTalk has done a good job from scratch, but b) again raises questions about its origin.