Available for PS4, PS3, Xbox One, Xbox 360, PC, Mac, Android and iOS (reviewed)
Time
was, the kind of decisions your average video games would throw at you
revolved around pinning down whether it worth jumping for those extra
rings on a risky platform in Sonic the Hedgehog, or which order to take
down the hordes of aliens heading your way in Halo.

Games,
however, have changed in recent years and, arguably post Mass Effect,
there’s been a desire by many developers to make the player feel as if
they have a direct bearing on a game’s storyline. It’s a fairly simple
science: if you can make the player feel more engaged in the process of
play, the likelihood of them tapping on your app icon or buying your game again in the future
is fairly high.

Some do this more successfully than others, of
course, though leading the pack with an array of titles – most notably
The Walking Dead and the new Game of Thrones game spin-off – has come Telltale Games, now plying its plot-based
trade with Tales from the Borderlands. 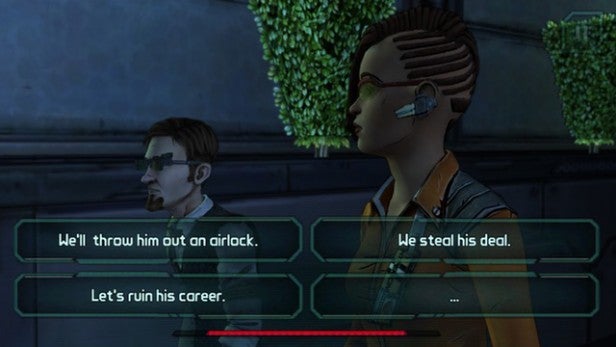 As you might expect, the
studio’s latest is designed to tie in with the wider Borderlands series,
though this is no FPS-cum-RPG. Instead, what’s on offer is Telltale’s
typical fare of point-and-click meets ‘interactive drama’ – if that
isn’t too loose a phrase. As prescribed,
the bulk of Tales from the Borderlands centres around conversation –
picking one answer from a selection of responses when question are posed
to you.

With each reply defined by a timer that hastily runs
down, Tales from the Borderlands encourages you to pick the right
response from your gut, with the premise that every answer you give
could change the course of the game later on. Whether engaging in
conversation or swiping or tapping the screen as directed during
action-based QTE sections, it’s this focus on pace that defines
Telltale’s latest, but is it adding a sheen to gameplay that’s otherwise
found wanting? Arguably, yes. 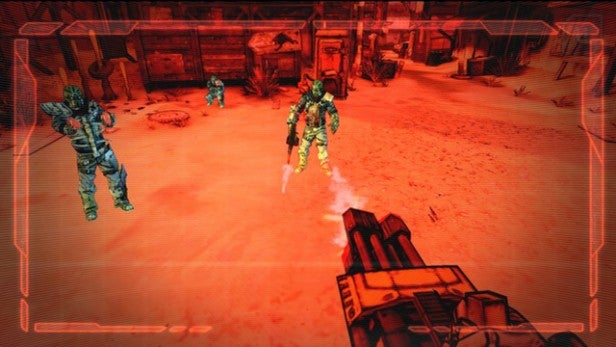 What Tales of the Borderlands does
better than other games from the same Telltales stable is wit. Right
from the off, there are lines within play that will make you howl. This
first episode in the series – dubbed Zer0 Sum – focuses on space-based
salaryman Rhys as he misses out on promotion thanks to the appointment
of his new boss. In revenge, he decides to try and usurp his superior by
heading down to the nearest planet Pandora to steal a deal from their
clutches.

Playing both as the aforementioned Rhys and
co-conspirator Fiona in two different plot lines that, as you might
expect, eventually come together, where Tales of the Borderlands suffers
is the feeling that the game’s story is pretty much set in stone. Case
in point: though responses to questions in conversations tend to include
an angry reply, a conciliatory reply and one that sits somewhere
between the two, often there seems to be very little difference between
any of them, meaning that your success seems only limited by the number
of times you might die during the (somewhat lengthy) action sequences.
Indeed, at some points it’s hard to tell just which response you opted
for based on what follows. 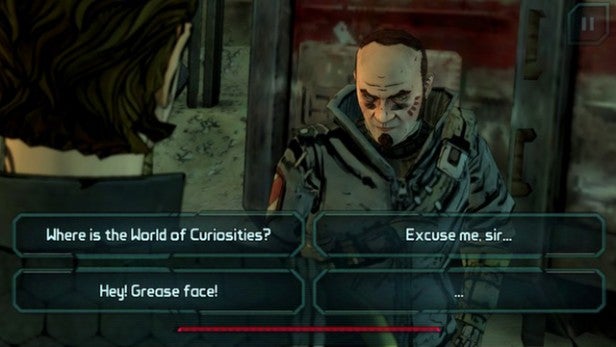 Despite the game’s lighter moments
script wise, we felt ourselves breezing through some parts of play more than
in any other Telltale title we’ve taken on, simply because we felt a
little bit like a spectator. Though Tales from the Borderlands is never
anything less than entertaining, it also feels a little half-baked
gameplay wise, and doesn’t really boast the same amount of mystery and
suspense as the The Walking Dead or The Wolf Among Us series.

Indeed, it’s perhaps
this association with glories past that does Tales of the Borderlands a
slight disservice: whatever franchise the game in question happens to be
associated with, there’s an undoubted level of expectation that comes
with any Telltale adventure game that, in this case, means players may
feel a touch short changed. 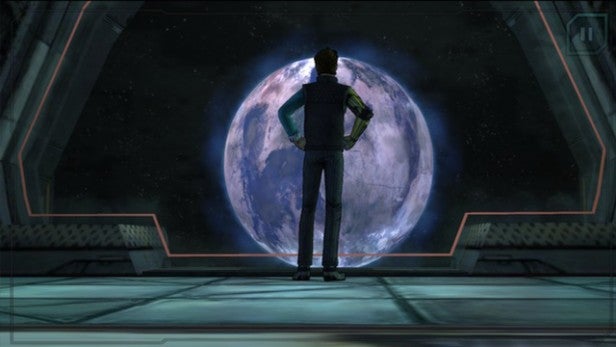 Justifiably or unjustifiably, Tales
of the Borderlands feels like the lesser kin of some great games –
echoing a model that Telltale has mastered in recent years, but perhaps
without giving it the creativity and drive it needs to stand out on it
own.

Verdict
Entertaining and delivered with the level of
sheen we’ve come to expect from Telltale adventures, Tales of the
Borderlands offers a more action-focused fiesta than The Walking Dead,
but lacks the focus and originality it needs to look like anything but a
slightly inferior mirror of all the studio has published before.