Available on iOS/Android
There’s been an admiral sense of ambition in everything Amazon Game Studios has pushed out on mobile in recent months, even if that drive for scale and quality hasn’t always been realised in the final release. With Tales From Deep Space, however, the publisher has hit the jackpot, delivering the kind of game that raises the bar for everything it releases in the months and years to come.

From Tales From Deep Space’s opening moments, it’s clear that Frontier has gone all out, combining touch-based gameplay that’s challenging without being taxing, housed in a space-age world full of the kind of character and detail so many choose to overlook on iOS and Android.

This, of course, should be no surprise whatsoever, given that Amazon’s latest comes from UK stalwart Frontier Developments – the software house behind everything from Elite to Rollercoaster Tycoon. That level of experience shines through and would surely not be capable from a fresher outfit. Without wanting to get muddled up in generic terminology, Tales From Deep Space feels like a video game in the very truest sense. 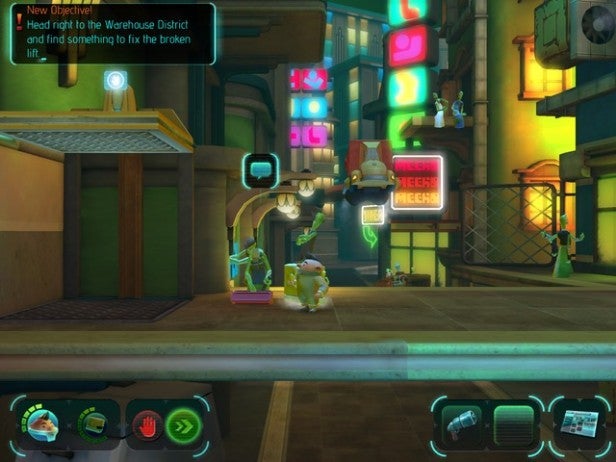 But what exactly is it? Playing, at least initially, as the somewhat bumbling (and especially cute) travelling salesman E, you find yourself wrapped up in a somewhat shady revolution back on the Big Moon Space Station after returning from a voyage out into the deep. With your luggage swiped and replaced by a talking suitcase by the name of CASI, the two of you set out to get to the bottom of the revolt of the Meek – as the name suggests, the station’s humble servants.

This all plays out as a part action, part puzzler platformer, with 3D visuals placed into a side-scrolling 2D setting. To move or even jump between platforms, you simply press your finger in the direction (and angle) you’d like to head, with shooting or fighting back is a matter of tapping your target furiously. By default you begin play E (with CASI following on by automatically), though it’s possible not only to switch over to CASI but also to hold him in place enabling you to press buttons or sit on switches that open up new areas of play. 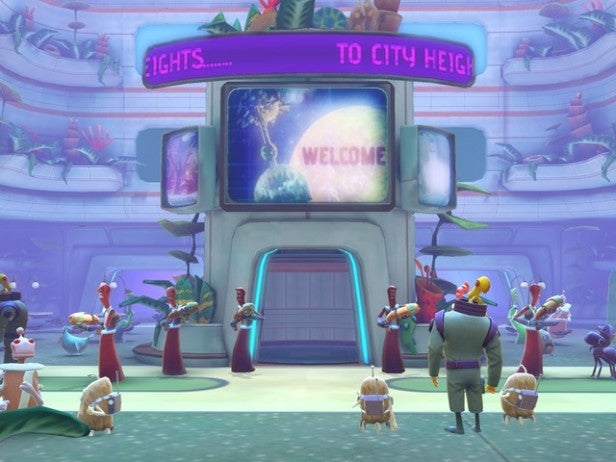 It’s managing your two characters – moving one, then moving the other – that makes up the bulk of play, and the ingenious levels are so designed so to appear simple to navigate through but actually prove quite a task in practice. It also helps that both the stages and the populous that inhabits them are so well designed and animated that Tales From Deep Space feels positively alive. Cars fly over head, NPCs argue in the background, and almost everyone you encounter has something witty or interesting to say. The only way to describe it adequately is to say that Tales From Deep Space is a game of real quality that, while feeling perfectly at home on a touchscreen device, would be by no means out of place on console or PC, either.

You almost want to recommend that anyone attempting to make an action adventure game for mobile in any form should sit down and play Tales From Deep Space before they even start out, such is the care, attention and quality that’s been pumped into play in spades. Whether you’re talking inventive and endearing character design or crafty and compelling level design, Frontier’s love of games and what they can offer gamers is woven into Tales From Deep Space from start to finish. 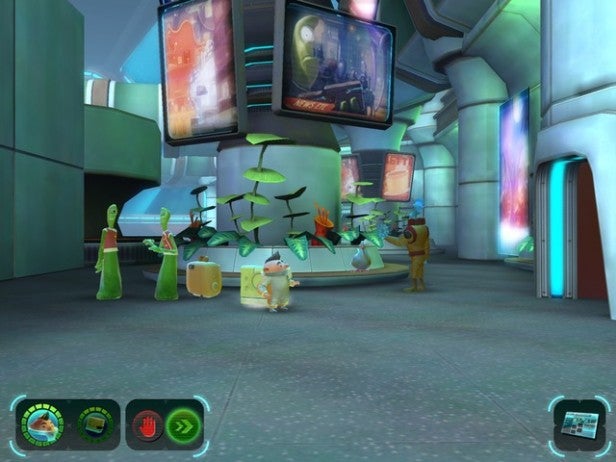 Which is why, even if you’re not a developer and you’re simply a humble gamer like us here at TrustedReviews, Tales From Deep Space is one of the few genuinely ‘must play’ games you’ll happen upon this year. Frontier has offered up a new pinnacle for adventures on iOS and Android and few will come close to reaching similar heights any time soon. That’s not an attempt to put down any of the other developers currently making their name on mobile, but rather stands testament to the excellence Frontier has gifted us, the gamers, with Tales From Deep Space.

Verdict
Boasting a level of quality that few games can ever hope to match, Tales From Deep Space’s puzzle and action based platformer is one of the best releases to hit mobile this year, with UK outfit Frontier serving up yet another IP that does credit to the studio’s reputation.