Taiko no Tatsujin makes a splash in Western territories, with Drum 'n' Fun, a faithful and fun package for arcade purists, while remaining something that I could easily recommend to casual Nintendo Switch owners.

One of my fondest memories of first visiting Japan was spending hours upon hours in the arcades. Dotted across Akihabara streets, they were brimming with experiences I never imagined would make it outside of Japan. But they have, with the likes of Yakuza and NieR: Automata proving that niche titles are more than capable of offering global appeal.

Now, Taiko no Tatsujin joins this growing roster of titles – a fiendishly adorable rhythm game that feels pulled straight from the arcade cabinets upon which it’s based. The traditional Japanese instrument, the Taiko drum, has become the one-stop-shop for anime opening themes, classical musical and scores of catchy J-Pop tunes as you bang along to the beat.

It’s a pleasure to see Taiko no Tatsujin finally come to Nintendo Switch, delivering a lovingly addictive rhythm outing with plenty of staying power – although, sadly, it falls short in some areas. 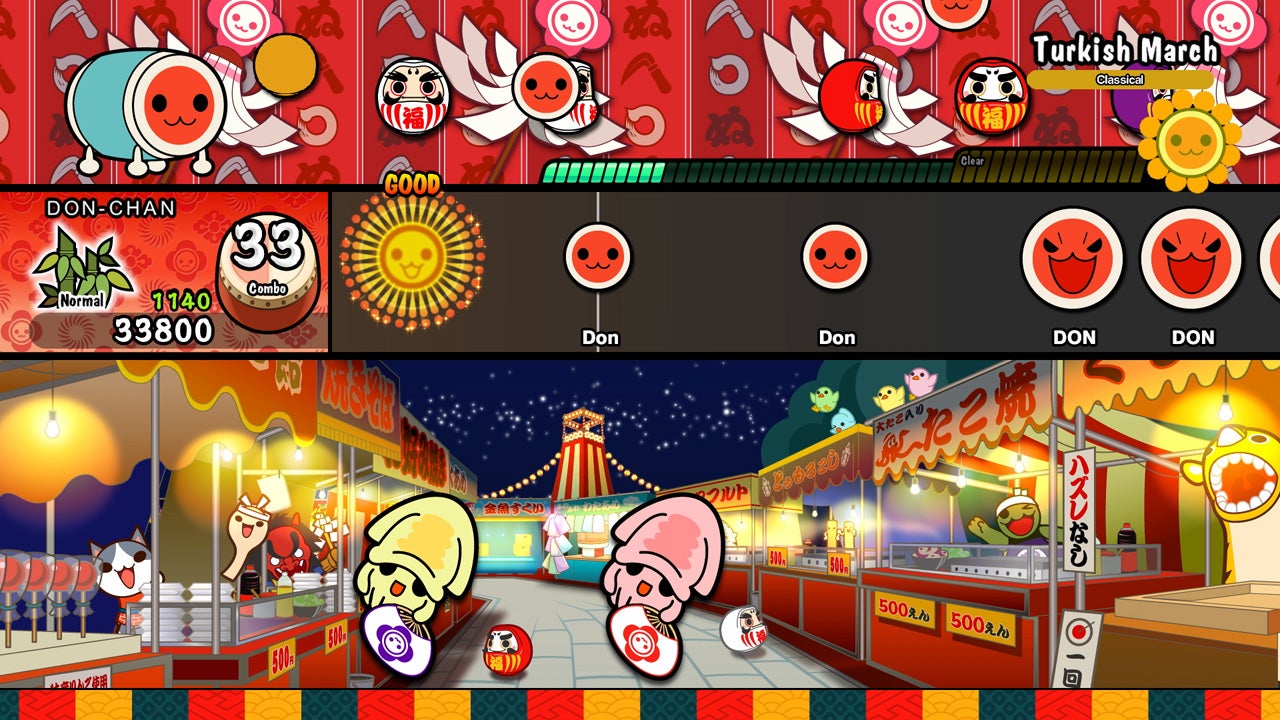 Each and every stage is brimming with colour.

Drum ‘n’ Fun is one of two Taiko no Tatsujin titles now available in the West. Drum Session launched simultaneously on PS4, although it’s exclusive to that platform, and lacks the nifty drum peripheral on offer with the Nintendo Switch. I didn’t have a chance the try the drum controller for myself, but there are plenty of other drumming methods that prove more than capable of getting the job done.

Taiko no Tatsujin has two principle notes for you to focus on, represented by the centre (red) and side (blue) of the drum. Each creates a notably different sound, making it easy to know if you’ve made a mistake or need to press both at once for a harder and higher-scoring response. With difficulties ranging from easy to extreme, I found myself climbing the ranks thanks to mechanics that are easy to understand yet incredibly difficult to master.

In the main, I played with the face buttons. A duo represented by two of the aforementioned colours, which you’ll need to press alongside the rhythm to make it through each song unscathed. Taiko is surprisingly unforgiving, happy to fail you on higher difficulties on missing only a few notes in succession.

If you don’t have the drum peripheral handy, you can opt for motion controls by detaching the Joy-Con and smashing at imaginary instruments instead. For those who don’t have the budget to shell out on the drum controller, this should be next best thing – so it’s heartbreaking to discover how unreliable it can be.

The Joy-Con displayed trouble differentiating between vertical and horizontal movements, so you’re left powerless when a note streak is ruined as you hit red instead of blue. It was so frustrating in fact that I opted to stick primarily with buttons or touch controls, the latter of which are genuinely excellent. Although, having a drum cover the bottom half of the screen when using touch controls is a nuisance, as you obscure the visual feast taking place in each song. 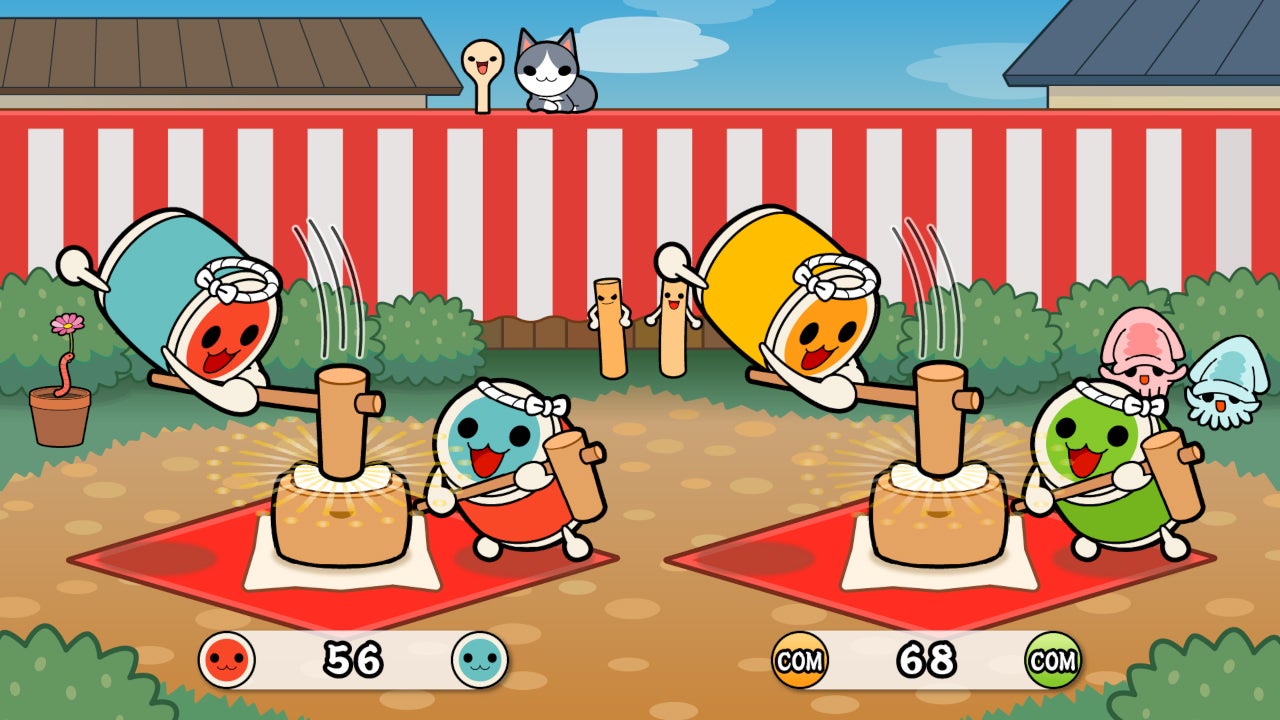 Each note is represented by an adorable cheer from the personified Taiko drums smiling widely on the side of the screen. In the Nintendo Switch version there are plenty of special characters to unlock, inspired by the likes of Kirby, Splatoon and other faces that hardcore fans will recognise from the arcade release.

It’s unfortunate then that the process of unlocking all of these isn’t entirely clear, although having them emerge randomly after playing 100 songs or messing around in challenge modes is an unexpected joy. Otherwise, progression in Taiko no Tatsujin is lacking, with no dedicated career mode to speak of.

Instead, you can play a vast library of songs with increasing difficulty levels, with a few unlockable songs surfacing along the way. After about 10 hours or so I was a Taiko master, with most songs on the “hard” difficulty level, although I still felt relatively inept whenever I dipped my toes hesitantly into the extreme category.

If you’re not getting into Taiko no Tatsujin for the generous multiplayer modes, you might come away disappointed by the lacklustre solo venture presented here. It remains brilliant fun, yet once you’ve played every song (73 in total), there’s little here beyond honing your skills on higher difficulties. 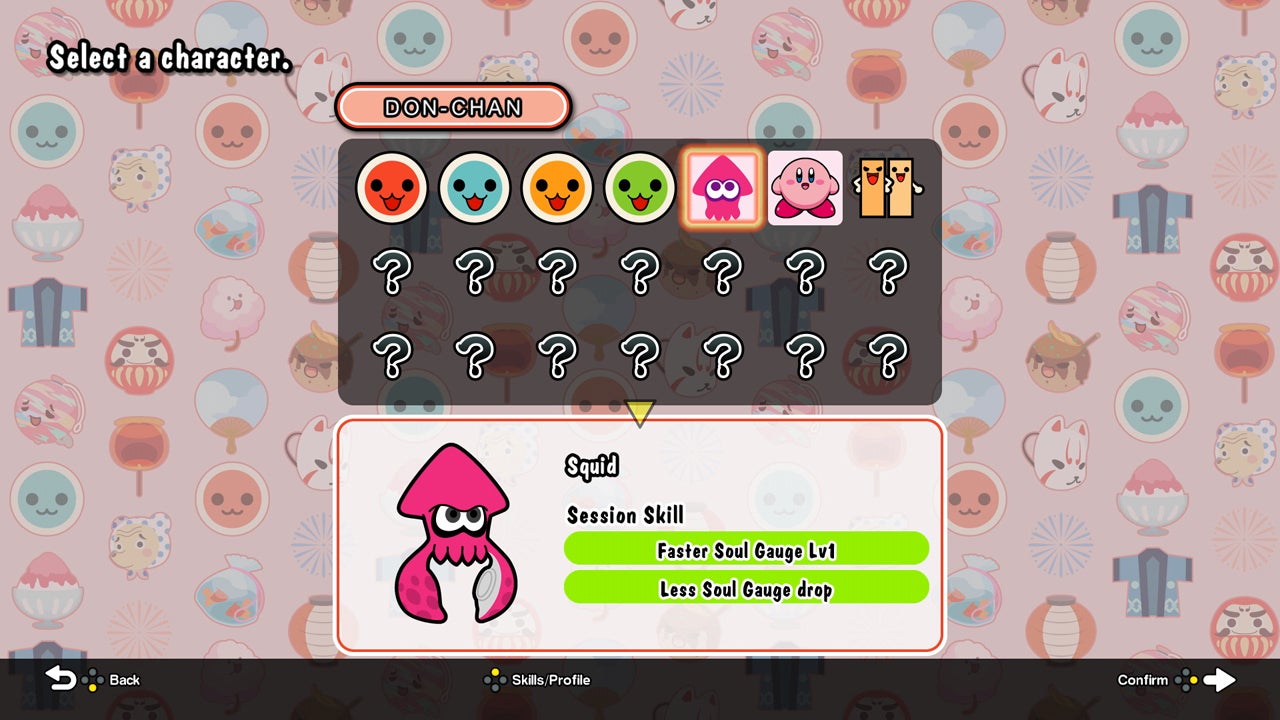 Fortunately, all songs from the original Japanese track list remain untouched here. Classics such as “A Cruel Angel’s Thesis” from Neon Genesis Evangelion make an appearance alongside Radwimp’s “Zenzenzense” from anime blockbuster Your Name. Taiko purists will love this, and newcomers shouldn’t come in expecting a Westernised playlist.

Taiko no Tatsujin has a healthy number of multiplayer mini-games on offer. They’re short and sweet, but plentiful in number and ripe for replay value with a few friends gathered around your Nintendo Switch. Many of them are inspired by traditional Japanese festival games; you might be catching a goldfish at a stall or setting off fireworks at an increasing pace. It’s awesome, and a perfect showcase for how beautiful Taiko manages to look at times.

It’s a real treat to finally see Taiko no Tatsujin make a splash in the West, with Drum ‘n’ Fun delivering a faithful and fun package for arcade purists, while being a title I’d happily recommend to casual Nintendo Switch owners.

The predominantly Japanese set-list might turn off some players, and the lack of a dedicated solo campaign can leave it feeling lightweight for the price, but this doesn’t detract from what is a simply joyous rhythm experience.