Available on PC (version tested) and Xbox One

Gone Home remains one of the best walking simulators of all time. By exploring a vast, empty house you piece together a touching narrative of two characters discovering their sexuality and all the struggles that come with it. It was touching, innovative and unlike anything we’d experienced before. Developer Fullbright’s influence can be felt in the likes of Firewatch and What Remains of Edith Finch, two excellent experiences that have debatably surpassed the storytelling crescendos of Gone Home.

With so much praise heaped on its spiritual predecessor, Tacoma has a lot to live up to. In its opening moments, echoes of Gone Home feel startlingly deliberate. You play as Amy Ferrier, an engineer having just boarded Lunar Transfer Station Tacoma. 200,000 miles away from the Earth, Tacoma’s crew have evacuated due to an unforeseen disaster, and you’re here to find out why. At first it almost feels like a survival horror in a similar vein to Amnesia and Outlast. You’re alone on an abandoned station, and it stays that way for its brief runtime.

Tacoma creates a world that feels well and truly lived in. Every room is a marvel in environmental storytelling with books, letters and virtual displays helping to describe who the crew of Tacoma are, and how they went about dealing with the disaster that befell them. I felt like a ghost, rifling through drawers and bedside cabinets in search of personal documents and a cheeky bit of gossip. Tacoma doesn’t hold your hand, either. The more you’re willing to explore and dig into every nook and cranny the more your investment in these people grows. 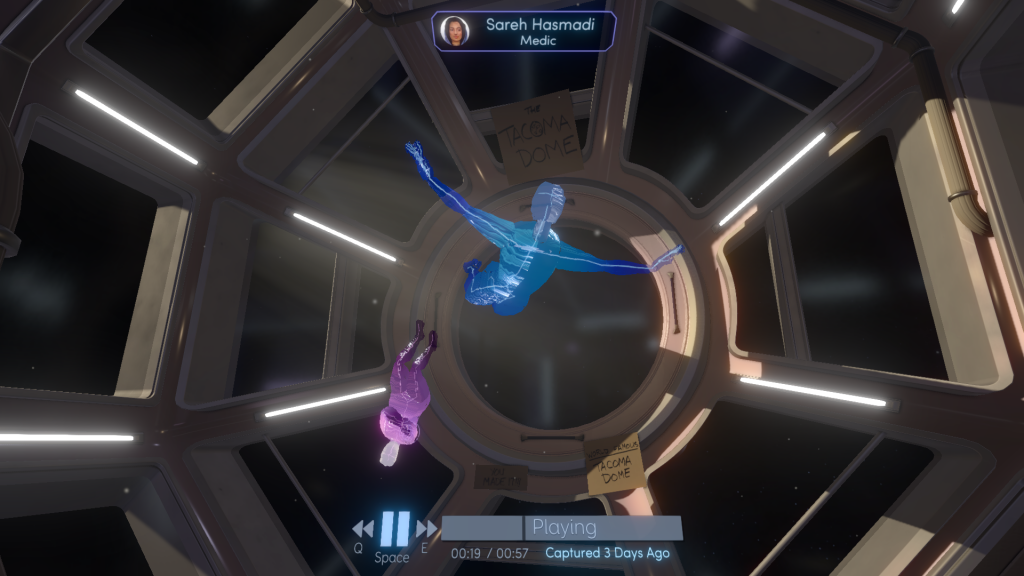 The ghost analogy extends further as that’s exactly how you view the crew. They aren’t dead, but are instead realised through augmented reality. Upon entering certain rooms you can witness pivotal moments from the past that detail full conversations between the dysfunctional team. You don’t just listen, though. Everyone is in possession of a futuristic display that stores emails, messages and even phone calls which can be accessed. All of these conversations can be rewound and fast-forwarded for that extra bit of scrutiny. On more than one occasion I had to dart between rooms chasing multiple characters at a time, gaining further context as I did.

In augmented reality the crew are represented as figures in primary colours walking about the ship. One of the earlier scenes has them all in the living area celebrating a party. I quickly found that they have a habit of splintering off into groups, meaning it was essential to replay scenes several times to get the full picture. In other games this would be a chore, but Tacoma makes replaying each scene a treat packed with neat character moments. It’s possible to miss certain conversations entirely if you fail to stumble in at the right moment. Luckily, Tacoma does a great job of ensuring the story is always easy to reach.

At first I feared the lack of physical appearance of said crew would impact the connection to the characters, but the stellar voice acting more than made up for it. Everyone is brilliantly cast, each excellently portraying worries, doubts and aspirations with nothing but disembodied voices. It’s powerful stuff, and Tacoma’s strongest moments are its quiet, tender ones, not those concerned with disaster and survival.

When you aren’t eavesdropping on the crew, Amy Ferrier’s other job is to obtain the ship’s dysfunctional AI before it falls into the wrong hands. This is where Tacoma falters. Fullbright has failed to craft an overarching narrative that capitalises upon the crew of Tacoma to which I spent several hours growing close. Instead, Ferrier remains a mute protagonist throughout. Beyond a brief few sentences inside the pause menu we’re given little reason to care about her mission or how it concludes. Gone Home was a little different, with the player controlling the sister of our main characters. It fostered a personal connection that is sorely missing here, and the whole package suffers as a result. 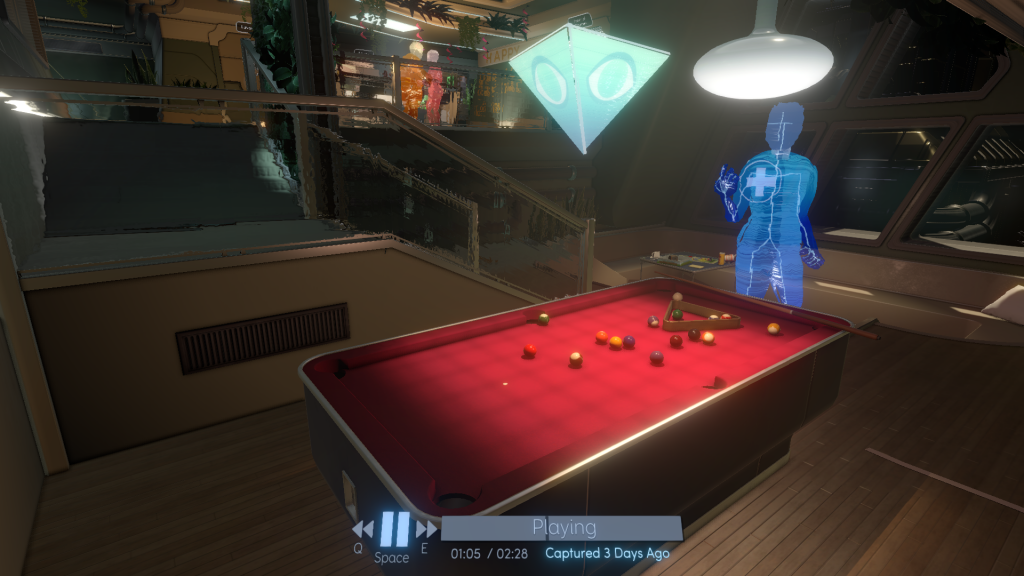 That being said, Tacoma is still a triumph in how it tells a story that is entirely discovered by the player. All members of the Tacoma crew feel like real people, each with their own flaws and imperfections. Sareh, the station’s medic, is a particular highlight. One scene has her suffering a panic attack, having no choice but to turn to the ship’s artificial intelligence for support. It’s a painful moment, and witnessing how each character suffers from their own problems outside of the wider dilemma works wonders for their development. I cared about all of them, for the most part, and wanted to see their stories through to the end.

The same sense of personality can be applied to the station itself. It’s arranged in such a way that you can actually imagine living there in the year 2088. The futuristic aesthetic helps everything look shiny and sleek, although the crew have made their fair share of personal touches. Cardboard signs lead you to specific locations while also giving them a charming nickname or two. It’s cute, and helps to quickly diminish the sense of terror you feel when first stepping on-board. There’s even a sick basketball court if you fancy shooting some hoops.

Unfortunately, the conclusion is achingly anticlimactic. I won’t spoil anything here, but the lack of personal investment I mentioned before surfaces once again, negating an emotional impact I feel should have resonated with me. Perhaps we’ll see the tale continued in the future, but as it stands, Tacoma introduces a beautifully crafted world with some one-of-a-kind characters, but struggles to tie them together in a satisfying way. Because of this, I’m left with an experience I can’t see myself revisiting. 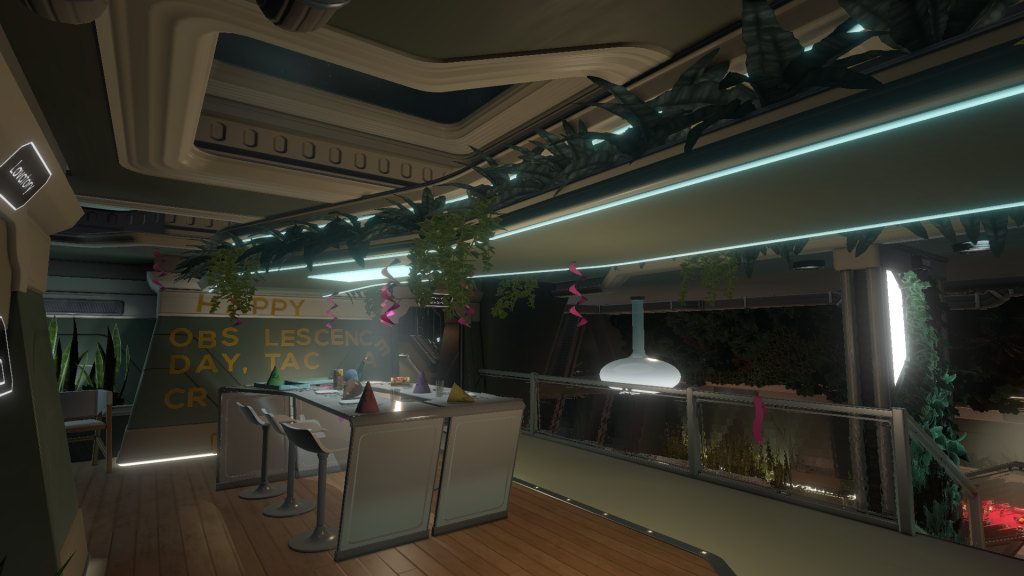 Fullbright has crafted an impressive yet ultimately unfulfilling narrative adventure in Tacoma. Its characters and setting are some of the best in the medium in terms of dialogue and atmosphere, but the overarching plot is far too weak to hold them altogether. That being said, exploring the lonely space station is a journey I don’t regret taking.