I’ve always said that if the mobile phone industry in the UK would pull its collective finger out and charge a reasonable price for mobile Internet access, they’d steal a march on their cable-bound competitors. Just think – instead of having to pay for line rental, landline phone calls and broadband on a monthly basis, you could simply pay one mobile bill and have everything included.


Until recently, that just hasn’t been anywhere approaching practical. Mobile data rates have been either too slow or far too expensive to justify replacing your landline connection, but that’s beginning to change. With the introduction of the first HDSPA mobile data cards last year, speeds have reached a level (1.8Mbps) at which mobile Internet can compete with some of the more basic wired broadband offerings. 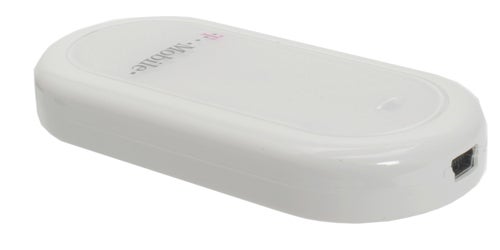 And now prices are beginning to catch up too with T-Mobile in the vanguard of developments. It has recently slashed monthly rates with ‘unlimited’ data allowance to £29.99. Now, with its new web ‘n’ walk USB modem, it is making the hardware just as accessible. The actual unit comes free on 18 or 24-month contracts and costs just £29.99 if you go for 12 months. Vodafone’s equivalent product is also free, but you have to pay a whopping £45 per month on its ‘unlimited’ data access deal.


The device itself works like a dream. In fact it’s identical, bar the logo on the front, to the Vodafone USB Mobile Connect Modem reviewed by Riyad in November last year. It’s constructed from glossy white plastic with a single blue LED and the T-mobile logo adorning the front. Connection is made via a standard mini-USB socket on the top edge and two cables are provided in the box for this purpose: one short, stubby effort, and a longer one with a second USB plug to draw extra power if your system can’t provide enough juice to power the modem. 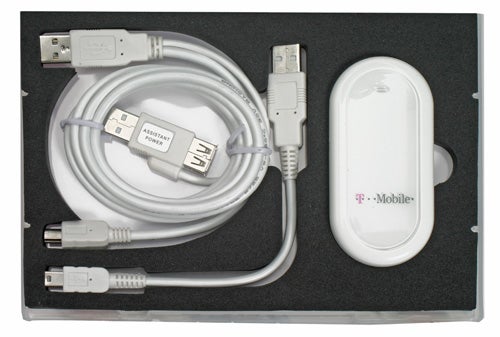 As well as looking great, it has all of the advantages of the Vodafone device too. This USB modem can not only be plugged into a Windows notebook, but also comes with Mac drivers in the box, and of course can be connected to your home desktop PC when you’re not out and about. It also allows the steadily increasing number of laptop owners whose machines do not have PC card slots, to use T-Mobile’s HSDPA service for the first time.

Windows users don’t even have to go through the rigmarole of installing drivers from disc. Just plug the device into a USB socket and it squirts all the software you need straight onto your machine. Apart from the hardware drivers this installs the web ‘n’ walk USB manager tool, which allows you to connect and disconnect at will, track performance and usage and to write and send texts. It’s all a doddle to use and you’ll be connected in a matter of minutes. 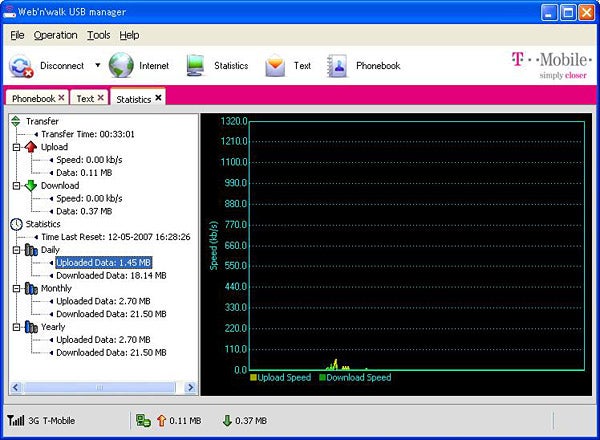 Just as impressive is the speed at which it allows you to access the Internet. Make no mistake, browsing and downloading using this handy little device is a perfectly viable alternative to wired Internet. I tested the modem at various locations in and around South Woodford in east London, including High Beach in the heart of Epping Forest, and found it to be extremely quick and responsive in general use. And while average speeds are unlikely to come anywhere near the quoted 1.8Mbits/sec on a consistent basis, you will see download speeds peaking at around 1.3Mbit/sec with average speeds hitting 550 to 750Kbit/sec. And as an added bonus, the modem will work with T-Mobile’s 3.6Mbit/sec service when it’s up and running.


It is slightly annoying that, in order to save on network costs, the T-Mobile service aggressively compresses images on web pages making some photos look quite poor. That said, you don’t really notice this most of the time and it does save download capacity for the more important stuff. 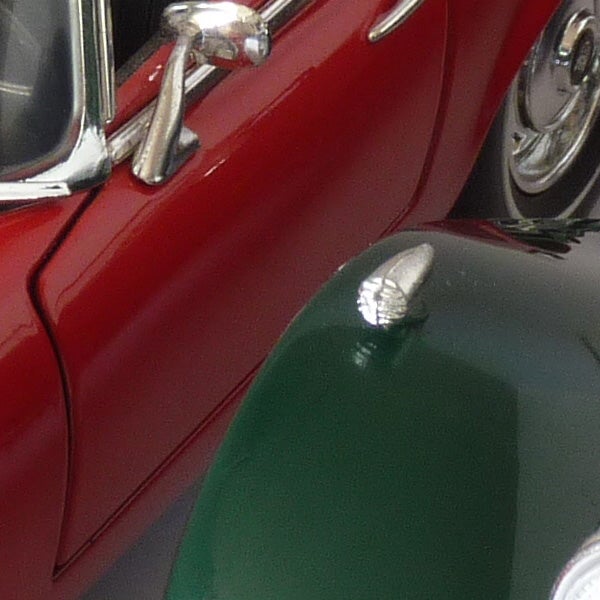 It’s also worth noting that when T-Mobile says ‘unlimited’ data access, it doesn’t actually mean unlimited in the truest sense of the word. The company’s ‘fair use’ policy states that if you exceed 3GB combined upload and download in a month, you may have the speed of your connection restricted. There’s also a clause in the ‘fair use’ policy that explicitly disbars the use of the web ‘n’ walk modem for making VoIP phone calls – you have to pay £44 per month if you want that. Despite this, T-Mobile has proved with its latest HSDPA offering that, as well as being extremely quick, mobile Internet does not now have to cost the earth.


For £29 per month you can have Internet access speeds approaching those afforded by low-end fixed line broadband, and the bonus of being able to connect wherever you can get an HSDPA signal means that many medium to low-use users will now start to consider dumping their landlines altogether. The fact that the modem is free on 18-month contracts and that the service is significantly cheaper than the Vodafone equivalent just puts the icing on the cake. Quite simply, T-Mobile’s web ‘n’ walk USB modem is great value for money.