I’ve spent several months with the Sidekick II one way or another. I’ve only had the model I am reviewing for a couple of weeks, but a while ago, and long before the UK launch, the American company behind it, Danger, loaned me a unit for a few months. Both times I’ve played with this kit I have been unable to decide whether I like it or not.


This is not something we reviewers like to admit to very feely. We’re supposed to be opinionated. Then again, I guess being undecided is actually having an opinion, and the reality is that my view is more complex than simply ‘I don’t know’, because there are elements I really like about the Sidekick II, and elements I don’t.


When you see one as you walk by a T-Mobile store (the company has the Sidekick II exclusively), you will be struck by two things: it looks a whole lot more like a games console than a phone, and it is big. 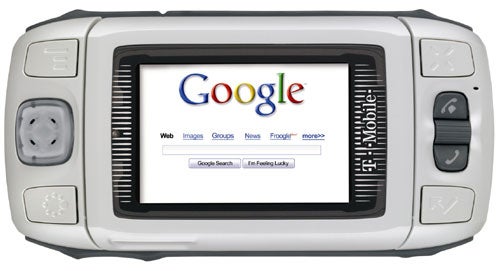 Size-wise you are going to need a spacious pocket to accommodate this device. It measures 129 x 66 x 23mm, and weighs 198g. The fact that it looks like a game console is related to the various uses for which the Sidekick II is designed, mostly messaging and entertainment. Making voice calls isn’t at the top of the list. Sure, voice calls are technically possible, but the Sidekick II feels like a brick to hold to your ear, and as it lacks Bluetooth you can’t use a wireless headset instead. You could opt for the mono earbud which comes in the box if you like, though.


Why, you are thinking, is the earbud provided mono and not stereo? The Sidekick II is aimed at a younger market, the kind that likes its music. But they can’t have it with the Sidekick II, which has no facilities for music playback built in.


Even if it did have, you’d have trouble getting enough music in the thing to keep you happy. There is 16MB of internal memory and no way for you to augment this using flash memory as, for all its bulky size, there is no housing for a flash memory slot.


Now all this sounds a bit negative, but it does make clear some of the reasons I don’t like the Sidekick II. Let’s look at the other side of the coin, and see what is good about it.


In most of its incarnations the Sidekick II is designed to be used in wide format, held between two hands. The screen is a not too wonderful but serviceable 60 x 40mm, 240 x 160 pixel, 65k colour TFT, and it faces outermost. On its right sit two large buttons and a wheel flanked by Call and End buttons. The wheel is used for moving through menus in the various built in applications, and does its job very well indeed.


On the screen’s left are two more buttons and a navigation pad. The top and bottom edges offer a few more buttons sitting along rubberised strips, including the power toggle, two of which have application specific functions and volume control which at the quiet end send you to vibrate and then finally silent mode. 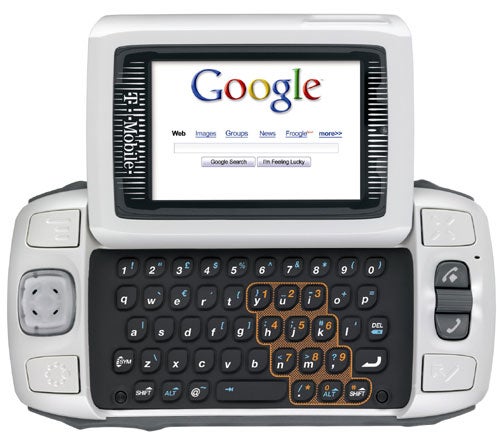 Incidentally, incoming calls and alerts are accompanied by some of the most garish flashing lights I’ve ever seen that illuminate the navigation button. You’ll like or loathe these – trust me.


There is a keyboard built into the Sidekick II. To get to it you push gently at the top right edge of the screen section. The screen spins alarmingly quickly around on a hinge in the centre of its top long edge, finishing up with its display having flipped through 180 degrees to give you a right-way-up view of it, and revealing what had been hidden underneath – that keyboard.


Because of the access mechanism the keyboard is slightly recessed below the edges of the hardware, but that doesn’t affect usability. The keys themselves are fairly nicely spaced, and though small are pretty easy to hit. To make voice calls by tapping out a number you need to use a defined area within the qwerty keys rather than a separate number pad which is pesky. You are much more likely, though, to use the built in software for initiating calls.


The software is accessible from a main screen though which you navigate using the roller on the right side of the Sidekick II. There is a Web browser, AOL instant messenger, email client, phonebook, SMS tool, MMS tool, address book, calendar, to do list manager, notes taker, camera manager and image viewer, a game called Rock & Rocket (an Asteroids clone), and download area where you can obtain new stuff such as ring tones and more applications.

Don’t get too excited about the camera. Yes it has a flash, and a self portrait mirror, but it only captures images at resolutions up to 640 x 480 pixels. Think of it as a picture messaging tool rather than a digital camera for everyday use.


What you’ll notice in the software that’s built in is a range of PIM tools which could lead you to believe that you can use the Sidekick II PDA style. Well, you can, after a fashion, and this brings me to the feature that I really can’t decide whether I like or not. 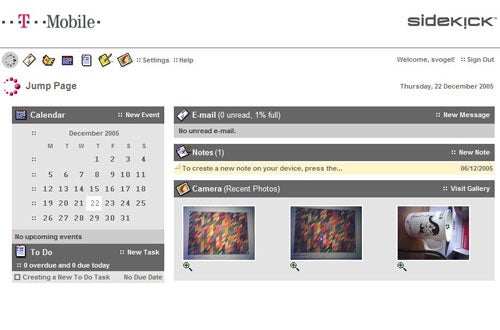 Effectively what you have here is an access anywhere email and PIM suite that doubles as an online backup system. It’s a clever idea, and the Web interface is clean and well thought out. But – and for me this is a huge ‘but’ – you can’t get any information to or from your PC without a considerable amount of jiggery-pokery.


There are no facilities to make a direct link to your PC provided in the product box. If you want to share contacts or calendar information with a desktop application you need to export it, then use the import feature at the Web site. The info is copied across to your Web space, and in due course will end up on your Sidekick II. This is fine if you want to make a once-only transfer, but hopeless if you want to synchronise on an ongoing basis.


If your mobile is your main means of organising your life then the Web based backup may be a compelling idea, and I can see how it could be very useful. But you are tying yourself to the Sidekick II, as neither the Web space nor the Sidekick II itself offer any way for you to export information from it. And if you are the kind of user that wants PIM type info on your own PC as well as on a phone, then this isn’t going to work for you.


Finally, a word on price. The Sidekick II will cost from nothing up to £49.99 depending on the tariff you choose. As I write T-Mobile is offering three Web ’n’ walk options at £15, £19 and £27.50 a month (or £13, £16 and £23.50 if you choose their ‘Self Serve’ payment scheme). Whichever you choose, you’ll need to factor in an additional £5 a month for what the company is calling its Sidekick II Service Pack. You will want this, as without it you don’t have access to AOL Instant Messaging, the Web site storage and backup service, email delivery to the device or automatic software upgrades. Bear that in mind when comparing the headline tariffs.