If you read my review of the Orange SPV M5000 a few weeks ago, you’ll already know that I like the idea of a connected device with an integrated keyboard. At the risk of sounding like a stuck record, the perfect pocket companion for me would be a Psion Series 5 that I could fit with a SIM card. Unfortunately that’s not going to happen, but at least the industry is starting to realise that a keyboard equipped device brings many advantages over a traditional handheld PDA style product. 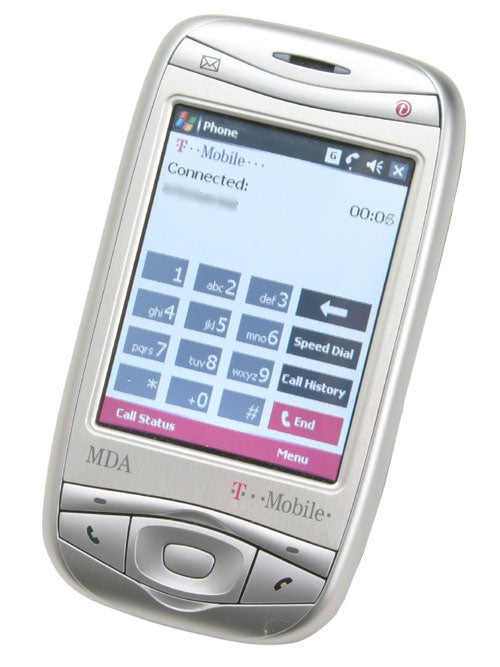 One of this new breed of connected devices is the T-Mobile MDA Vario. The Vario is far smaller than the SPV M5000, although still a fair size by mobile phone standards. That said, it does fit in the hand nicely and is more comfortable to use as a phone than previous Windows Mobile devices I’ve used.


At first glance the Vario looks much like a small PDA, complete with four-way pad at the bottom and two soft keys. However, beneath the two soft keys are Call and Hang-up buttons, which give away that this is more than just a small PDA. Also above the screen are shortcut buttons for your Inbox and browser, again highlighting the connected nature of this device. 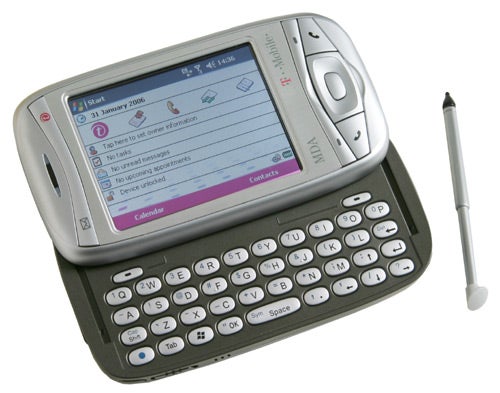 But the best trick that the Vario has up its sleeve is that the whole front of the device can slide to one side revealing a keyboard. As soon as you slide the screen over, the display switches from portrait to landscape mode, making it far easier to type documents. A landscape orientation also makes browsing web pages easier, although the screen resolution of 320 x 240 limits the Vario’s usefulness in this department.


The keyboard itself is obviously small, but having got used to typing on SPV M5000 I found that I could instantly produce text at a decent speed – in fact I’m writing this review on the Vario right now. But it’s not all good news with this keyboard, although all the letters are present and correct, every key has had to double up with a second function since there simply isn’t enough room for all the keys. The biggest issue with the keyboard is that there are no dedicated number keys, meaning that you have to use the function key every time you want to type digits. 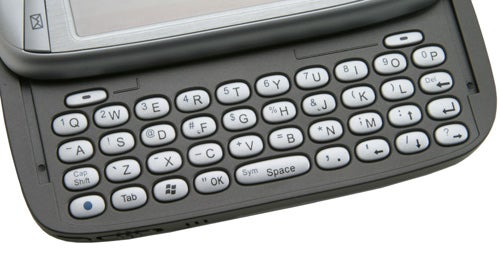 Surprisingly though, I found myself getting used to the constant function button presses to obtain the desired characters – with a coma requiring a press of the function key I had no choice but to get used to it. On the plus side, the keys do glow blue when you’re typing, but once you’re accustomed to the keyboard you won’t be looking at the keys anyway.

There’s no doubt that the Vario is a good deal smaller than the SPV M5000 (or the MDA Pro as T-Mobile calls it). The Vario also undercuts the SPV M2000 significantly, while the landscape orientation of the keyboard makes it far easier to type on. Pretty much everyone in the TR office found the Vario comfortable to hold while typing, and surprisingly the general consensus was that this device was small enough to use as your everyday phone. I’m not sure that I’d want to carry the Vario in my pocket at all times, but I do admit that I’d feel far less stupid holding it to my head to make a call than I would using either the SPV M2000 or M5000. 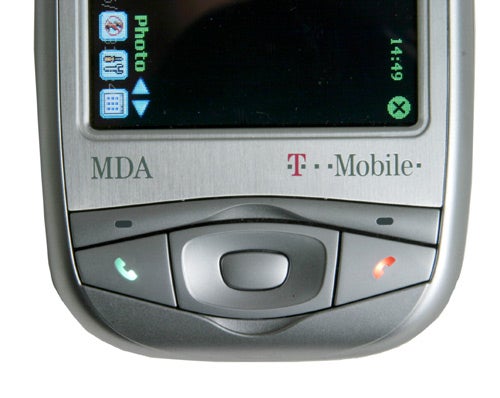 Every edge of the Vario has been utilised. On the left is a sliding switch for adjusting the volume, along with a shortcut menu button – on the shortcut menu you’ll find soft switches for the integrated WiFi and Bluetooth adapters, along with mute on/off and synchronise soft buttons. On the top is the main power button and a mini-SD card slot – this is a change from the standard SD card seen in the MDA Pro and SPV M5000/M2000 units.


On the right side is a shortcut button to the voice recorder, a shortcut button to the integrated 1.3 megapixel camera and an IrDA port. Finally, on the bottom is a mini-USB port for charging and synching, a battery release switch and a headphone socket – unfortunately a 2.5mm socket. Of course the bundled hands-free headset uses a 2.5mm plug, but don’t expect great sound quality from this if you want to listen to music, and you won’t be able to plug in some decent headphones without an adapter.

At the bottom right corner of the Vario you’ll find the stylus, which is unfortunately one of the most disappointing aspects of the device. When you remove the stylus it’s tiny, but it is telescopic and almost doubles in length when extended. However, even when extended it’s a bit on the small side, and is far from comfortable to hold.


The Vario runs Windows Mobile 5 like the SPV M5000, but the Vario doesn’t have quite as much horsepower under the bonnet. With a 200MHz processor driving things along the Vario isn’t quite as swift as other smart phones that have made their way into the TrustedReviews lab, although in general use this won’t really be an issue. Were it does become an issue though, is if you wanted to use the integrated WiFi capability for Skype – mobile Skype requires a 400MHz processor to operate.

Talking of WiFi, strangely T-Mobile has disabled 802.11g support, leaving only 802.11b as a connection option – this is odd because the HTC Wizard, on which the Vario is based does support both standards. A quick look around the web showed that a small registry edit will allow the Vario to connect to 802.11g networks – if you want to know how, try clicking here.

Making a call is a relatively easy process – you simply tap the call button and a virtual keypad will appear on screen. You then simply tap in the number using the stylus or your finger and hit the call button again. The Vario is a quad-band handset, so it should work in most countries around the world – in fact I’m using it while in San Francisco right now, so GSM 1900 definitely works.


There’s a decent amount of memory built into the Vario, but about half of the 44MB of program storage is already filled, leaving you just under 24MB to install anything else. There was also about 40MB of storage space free, although you can easily augment this with a mini-SD card – at around £20 for a 512MB card, it won’t cost the earth to expand the storage capacity. 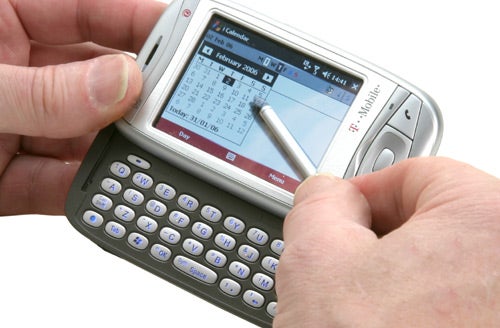 The MDA Vario is available for free on T-Mobile, with the Web ‘n’ Walk 100 plan giving you 100 anytime, cross network minutes a month, along with 40MB of included data for £30. That’s a pretty good deal, and should mean that you can make use of all the data features on the Vario without ever worrying about your monthly bill.


The big question though, is whether I’d be willing to use the Vario as my everyday mobile phone, as well as a mobile data device and the answer is, probably not. Even though with dimensions of 108 x 58 x 18.1mm (LxWxD), the Vario is far smaller than the SPV M5000 that I currently use as my mobile data device, it’s not really small enough to make me want to carry it around with me all the time, even if I don’t need data services. That said, there are many people, including some of the guys in the TrustedReviews office that feel differently to me. Considering I personally know people that use far larger devices as their everyday phone, it’s not surprising that they see the Vario as a pretty compelling concept. 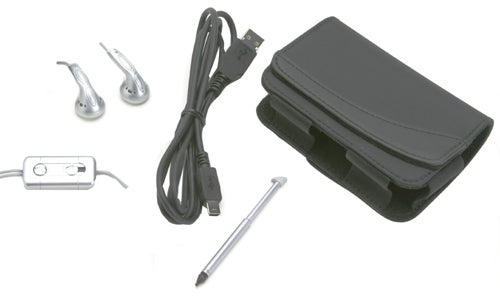 As a mobile data device the Vario doesn’t quite have the edge of the SPV M5000 or XDA Exec, both of which offer 3G high-speed connections. However, I’ve been using the Vario as my mobile mail client for a few weeks and it works admirably. Likewise, it’s a great device for using instant messenger on the move – for a true testament of mobile computing, I recently spent a train journey chatting to my News Editor, Gordon over MSN, while he was sitting in Brazil with his notebook. It was almost like one of those Intel Centrino TV adverts.


The MDA Vario is probably the closest thing I’ve seen to a “do it all” mobile device. It works well as a pocket size data centre and is just about small enough to use as a phone. That said, I’d still like to see something a little smaller and with 3G support. Ultimately though, if you want to carry just one device that does everything, the Vario deserves close inspection.