So, you’ve considered buying a connected PDA but thought they were a little small for your needs. You’ve even looked at those with keyboards and felt your fingers couldn’t cope with the tiny keys. Next you’ve considered an Ultra Mobile PCs like Samsung’s Q1 and thought that was just a bit on the large side considering it is not a fully fledged laptop computer.


Maybe the device for you is something in between the two. Maybe that device is T-Mobile’s Ameo. Or maybe not. After a fortnight of pretty serious usage time with the Ameo, I have to say I wouldn’t choose it as my everyday smartphone, or as a replacement for a notebook computer. 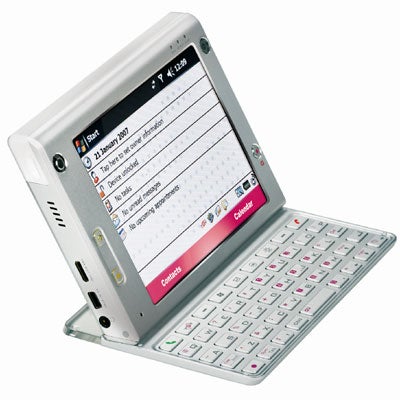 But I do think it shows off what the Windows Mobile format can be made to do if stretched, and that there is certainly room for more experimentation of the Ameo kind. And I think anyone who has bought Nokia’s N800 Internet Tablet might be kicking themselves after reading this review.


So what is this beast? Well, it is a connected Windows Mobile 5.0 device with a separate keyboard, and it is absolutely brimming with features. Everything but the keyboard resides in a box 133mm wide, 98mm tall and 16mm deep. If you don’t need the keyboard you can just carry this box around. 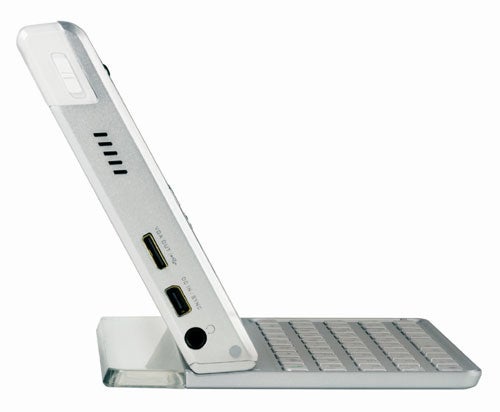 Its 298g of weight will feel like a brick in your pocket, and when you get it out to make a voice call you’ll look like a proper Charlie (sorry to anyone reading this called Charlie). But when you want to read the screen its 480 x 640 pixels spread across an area that measures 5in corner to corner will make you smile.


The stylus that lives in a housing on the top right back of the casing won’t be needed much, as finger-tapping at the touch sensitive display is as easy as pie because the Windows Mobile icons are much larger than usual. You’ll only need the stylus for data entry such as making calendar appointments or writing SMS messages.


The keyboard is an example of clever minds doing clever things with system design. It is a slab about the same height and width as the main unit, but just 4mm thick. I weighed it at 78g. Lay it flat on the table and you can see a connector at its top edge. Bring the main unit alongside and align its connector and seriously strong magnets join the two sections together. The main unit’s sides are angled so that the screen is a little laid back and you get a pretty good viewing angle.

Clever this undoubtedly is, I am not so sure about its practicality. The magnets are strong, but when I accidentally brushed my forearm along the top of the main unit while reaching beyond it to get something on the desk, the main unit just fell over. No problem on a desk, but I wouldn’t want it to fall onto the floor too many times.


Further magnets come into play if you lay the keyboard section keys down on the screen of the Ameo. The two are held together fairly firmly if you are keeping the Ameo on a desk, though I wouldn’t want to trust it in a drawer or a bag.


In these situations you can use one of two carrying cases. One of these holds both sections of the Ameo in a configuration which allows you to fit them together without removing either from the case – it’s quite clever, that. The other is simply a zipped pouch designed to carry the keyboard section, mains power adapter, bundled stereo headset and some other gubbins including a VGA out cable. I found it tricky to get the main unit in this pouch along with everything else though. 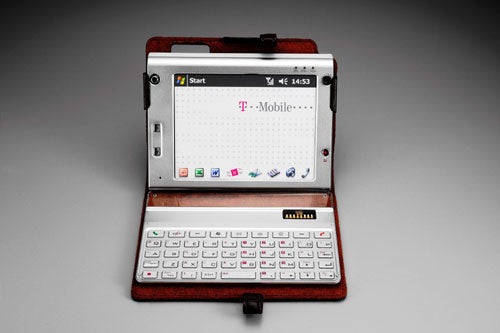 The idea of sending the Ameo’s contents to a monitor is a clever one, encouraging you to think of it as a portable computer. But the cable itself is a mere 18cm long, so you’ll be hard pushed to use the Ameo comfortably when it is plugged into an external screen.


The Ameo is a 3G device with HSDPA as well as quad band GSM with GPRS. It has a front facing camera for video calling, and this, rather than voice calling, could well be its metier, because the video calling windows are huge with the larger one about 70mm corner to corner and the smaller one 30mm. Leaving the Ameo on a desk during a video call is a no-brainer, and the whole experience is very positive – assuming you’re into video calls of course.


An Intel PXA270 processor running at 624MHz provides the processing power and there is a dedicated graphics management chipset too. These didn’t prevent the Windows Mobile ‘wait’ icon popping up from time to time, but it didn’t do so any more than we’re used to with other Windows Mobile devices.

There is 128MB of RAM and 256MB of ROM. This is more than you usually get with Windows Mobile devices, and as usual it can be expanded on. There is an SD card slot on one edge of the casing. This accepts SDHC cards, with capacities currently running up to 8GB. But you shouldn’t need any kind of memory card for a while, as there is also a 8GB hard disk inside the Ameo.


Wi-Fi and Bluetooth are both built in, and I have to say that another area in which the large screen comes into its own is Web browsing.


Alongside the front facing camera for video calling, the back of the Ameo houses a 3-megapixel camera with an LED flash unit. And, as if all this is not enough, there is a SiFRstar III GPS antenna built in. My review sample didn’t come with any navigation software, but I had a word with ALK, which has had distribution deals with T-Mobile for its CoPilot software on a number of previous Windows Mobile devices, and was told that CoPilot would be available with the Ameo at some stage. It is a case of ‘watch the T-Mobile Web site’, I guess. 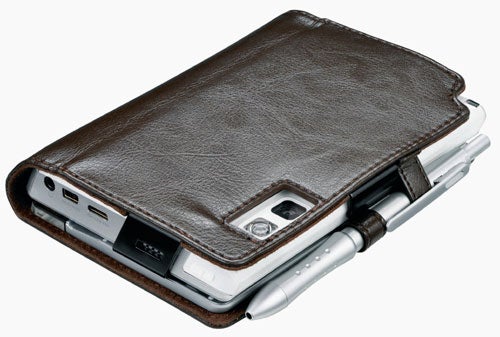 The keyboard has several function shortcuts as well as qwerty keys. For example there’s a web’n’walk button, one that launches the Windows Mobile messaging software, and one to activate the Start menu as well as Call and End keys. Function key combinations let you get to symbols, and the space bar is double width.


For all that, the keyboard is nowhere near good enough to cater for touch typing. It is simply too small for that. Its qwerty keys are well spaced and fairly large which makes hitting them successfully easy enough, but they are quite unresponsive. A more solid break and spring back would have helped with typing at speed. Also, it is impossible to hold the Ameo in two hands and type with the thumbs as it is with, say Orange’s new SPV E650 (I’m working on a full review of the E650 now – ed.). The whole caboodle is just too top heavy and unwieldy for that, and so the keyboard is a desktop only solution.

Around the edges of the main body, surrounding the screen, and on the sides, are the kinds of buttons we usually associate with Pocket PCs. There are, for example, OK and Start Menu buttons to the left of the screen. On the left edge is a volume rocker, a 3.5mm headset jack, mini USB power connector and the VGA out port. (Incidentally, the printed manual suggests the provided headset needs the mini USB connector, but our Ameo shipped with a headset that employed a 3.5mm jack).


On the right edge is the main power button and one which on a short press starts the Comm Manager (for controlling Wi-Fi, Bluetooth and GSM connections), and on a long press lets you make a voice recording. There is also a camera control button here. Speakers sit on the left and right edges too.


Your SIM goes in a slot on the bottom edge – this is the same slot that houses the battery and SD card. 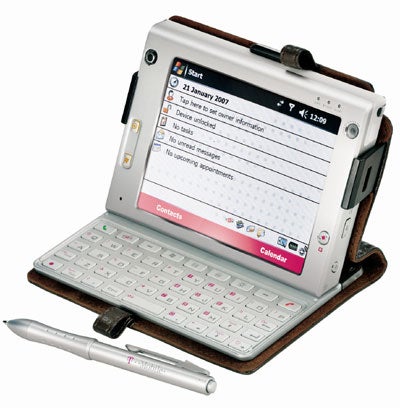 There are couple of more unusual controls on the front of the Ameo. To the left of the screen is a mini joystick which works very well for navigation control. To the right of the screen is a button which launches the built in VueFLO software. This works with the included Opera Web browser and lets you control up and down scrolling by tilting the Ameo. It is a weird system, and I can’t say I prefer it to simply dragging the page around, but it works well enough. And yes, I did say the Opera Web browser. Opera’s great plus over the also included Internet Explorer is that it allows for multiple Web page to be opened at the same time, accessible via tabs – something that’s extremely useful when desktop real estate is at a premium.


Battery life is hugely important with a device like this. Its 3G, Wi-Fi and GPS pretensions mean it may need to work hard away from mains power. The usual test, playing music non stop with the screen forced on, got me seven and a half hours of music from a full battery charge. I’d say this is respectable, but I would (as always) have liked more.


As I said at the outset, the Ameo is not an ideal everyday smartphone, it’s simply too large for that. Nor can it replace a notebook computer, it’s not sophisticated enough for that. Indeed, while I think it is clever and I do like it a lot, I am not sure it will find a place on many desks, or in many pockets.