A good way to try out Hotas since it costs less than a set of Joy-Cons for the Switch, but limited compatibility (for the Xbox) means it’s only worth it if you love those games.

What is the Thrustmaster T.Flight Hotas One?

The T.Flight Hotas One (“Hotas” stands for hands-on throttle and stick) is an entry-level joystick and throttle for flight sims that’s compatible with both Xbox and PC. The price is super-competitive, so don’t expect luxury features or a wealth of buttons. 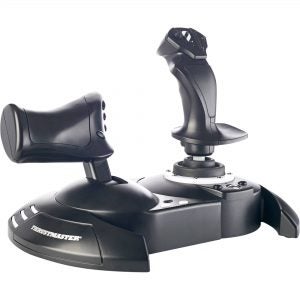 The T.Flight Hotas One – Design and features

There are 15 buttons on the stick and throttle. The stick has a four and eight-way hat, as well as three buttons on the base and a twist action. The throttle has six buttons on the handle, and a rocker switch (more on this later). On the base you’ll find three more buttons. 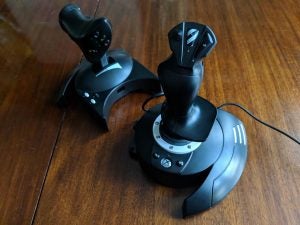 Each button has its name (X, Y, and so on) but is numbered, too, which is extremely handy when you’re remapping them and unsure what particular button is set-up as.

The T.Flight can be operated as a single unit or two separate ones, depending on the space available to you and personal preference. The bases join together and are secured using two screws. An Allen key is tucked away in the base of the joystick to adjust the screws. 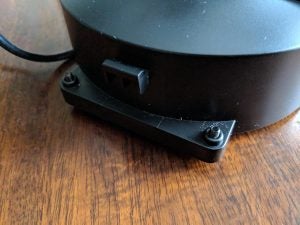 The cable connecting the two bases winds up in the base of the throttle, so it doesn’t get in the way if you push the two bases together. 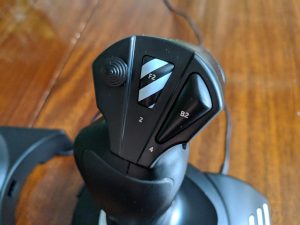 The resistance on the joystick can be adjusted using a dial on the base. The throttle’s resistance is set, but it does have a subtle notch to let you know where the midpoint of its action is. This is useful when you want to dead stop and not fly into reverse.

Sadly, neither base has an easy way to mount it to any surface, but I suspect this is because the T.Flight Hotas One isn’t aimed at the build-a-special-cockpit market. It’s a starting point  – and for that it’s good.

Ergonomics are generally decent, apart from the positioning of the Y button. It sits much further back from the other buttons, so you have to lift your hand to get at it or attempt to press it with the base of your thumb. 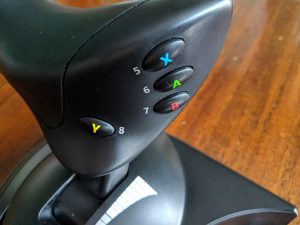 T.Flight Hotas One in Elite

The T.Flight Hotas One is designed to be played with Elite. So how does it work? Short answer, pretty well considering the limited buttons. The single hat switch controls the power to systems, but in combination with other buttons (X, Y, A, B), it lets you do far more advanced stuff.

On the throttle handle the rocker switch and two other buttons let you strafe side to side in combat, which is essential. Especially if you’re as bad at parking your spaceship as I am. The throttle goes from thrusting forward, to dead stop, to all engines in reverse. 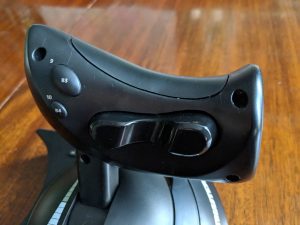 Afterburner is mapped to B, and if you hold it down it does more, such as lowering the landing gear. Having those two controls (explode forward with no way to slow for a few seconds or lower your landing gear) close to each other isn’t great, but that’s a problem with the default Elite mapping, rather than joystick. You can of course re-map everything.

The controls are light, especially the stick (you can change this), but it feels pleasingly precise. If you’re coming to this stick from the standard Xbox controller, you’ll adaptquickly and definitely enjoy the game more. On the PC, everything works almost instantly.

Why buy the T.Flight Hotas One?

If you’re tempted by a Hotas setup, but don’t want to spend a fortune, this joystick is a great way to try out flight-sim controls. The button setup isn’t daunting, but you may find yourself hankering after a few more eventually. That’s when you should investigate Saitek’s X52 or the Thrustmaster T16000m. Or, if you’re feeling flush, Thrustmaster Hotas Warthog.

Essentially, this is a weirdly shaped Xbox controller for playing flight sims, and for that the Hotas One does well. It’s a good way to try out Hotas for less than the cost of a set of Joy-Cons for the Switch. But if you’re buying it just for use with the Xbox, check to see your game is supported first.