The G 2000 R may well be the ultimate plug-and-play turntable. German audio specialist T+A (Theory + Application) has crafted a high-end record player that requires the minimum of fuss, thanks to a built-in phono stage and some first-rate components from Clearaudio pre-fitted at the business end.

The G 2000 R is a gorgeous, mighty slab of hi-fi. The heavyweight plinth – despite being MDF at heart – is encased in beautifully brushed metal with neatly chamfered edges, perfectly matching the other products in T+A’s 2000 R range.

Part of the reason for all that heft is that T+A has done an enormous amount of work to reduce external influences, damping and shielding as many areas of the system as possible. It’s also fitted a crystal-controlled synchronous motor with DSP-optimised voltage control to keep the platter running as smoothly as possible. As a result, wow and flutter is claimed as ±0.02%, which is almost as good as you could hope for, and T+A quotes a rumble figure of -82dB, which is exceptional.

On the plinth’s front are buttons for on/off and 33 and 45rpm speeds, all with surrounding LED status lights. The LEDs on the speed buttons cleverly light red while the platter spins up to the correct rpm, and then turn blue-ish white to let you know it’s time to let the needle drop. 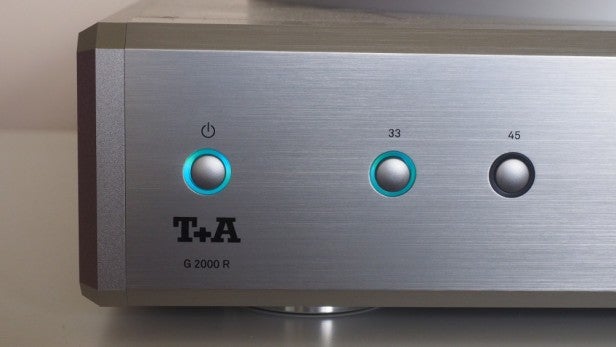 The platter itself sits upon a sub-platter driven by a belt connected to the motor pulley, and it’s also rather hefty. It sits down a little within the plinth, making it look far slimmer than it is, and is topped with a silicone rubber mat. The whole effect, to my eyes, is of a Linn LP12 that’s been reimagined by Audi. And I don’t mean that in a bad way.

Fitted in the usual place at the back right is a gorgeous tonearm with a silver carbon-fibre arm tube that’s unmistakably been made by Clearaudio. It looks like a modified version of the Satisfy arm, which I’ve previously used on the now-discontinued Clearaudio Ambient – one of the finest turntables I’ve ever had the pleasure of hearing.

The T+A’s tonearm has a far more substantial arm lift than the Satisfy, but everything else looks the same, including a magnetic anti-skate that’s adjusted via the turn of a knurled knob, and a two-piece aluminium headshell with azimuth adjustment. 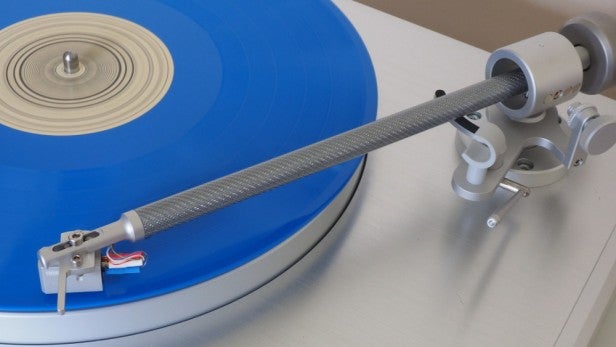 Bolted to that headshell is a T+A-branded MC-2 moving coil cartridge that’s also made by Clearaudio. It looks very much like the Clearaudio Essence, but has a higher output of 0.75mV and some other slight spec dissimilarities.

For those looking for a turntable to match their T+A hi-fi setup, but willing to compromise on vinyl performance or needing to save on the cost, the G 2000 R is also available in a cheaper form, with a moving magnet Ortofon 2M Bronze cartridge and modified Rega tonearm. You can even buy it without the internal phono stage, with prices starting at £3,432.

Around the back of the plinth is a standard kettle-plug socket – the power supply is within the plinth and heavily shielded – as well as a stereo pair of RCA phono sockets and a ground connection. The ground isn’t actually needed with the top-end model I tested, due to that built-in MC phono stage. There’s also a pair of digital connections that enable auto-power-on from the matching 2000 R amplifier, if you’ve opted for the full T+A setup.

A very neat dust cover is supplied, which is basically just a sheet of shaped Perspex that sits on the top when the turntable isn’t in use. It has a hole for the spindle that makes it simple to fit, and there’s a notch on the right that locates over a peg on the plinth’s top plate, so the cover can’t accidentally spin around and damage the tonearm. 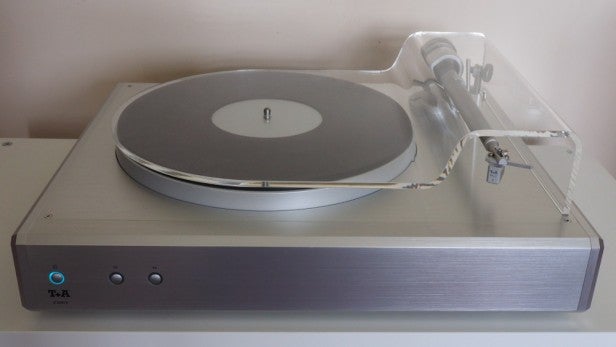 You won’t find a record weight in the box, but T+A offers one as an optional extra for the princely sum of £154. The same amount will also get you a built-in record-cleaning brush that mounts on the back left of the plinth. Very old school.

The fit and finish, as you might expect at this price, is flawless. It all looks and feels sumptuous – you won’t find a sub-£2,000 turntable package that comes anywhere close. 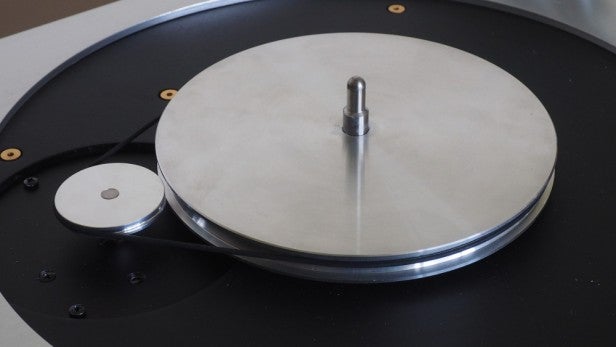 The cartridge is pre-fitted and aligned, so the only other step is to wind the counterweight onto the back of the tonearm until you achieve the correct tracking force (2.0g in this case). Sadly, there’s no tracking force gauge supplied and the counterweight doesn’t have a scale around it – the instructions just provide a rough indication of the number of turns to give it. But if you’ve spent close to £5k on a turntable, there’s a good chance you already have a gauge and all the other usual vinyl-tuning accoutrements handy.

The G 2000 R’s feet aren’t adjustable, so if your rack or shelf isn’t level you’ll need to address that. 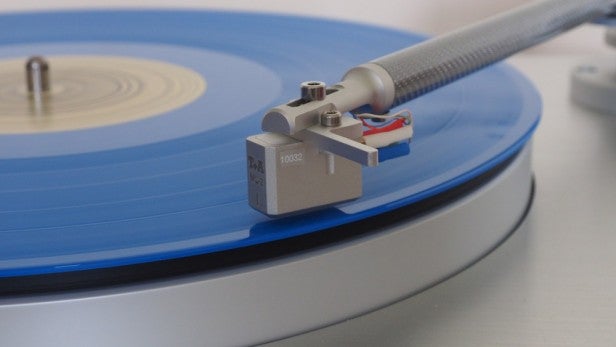 I did most of my listening through Leema Acoustics electronics, wired with Atlas Mavros cables, first to a pair of Mordaunt-Short Performance 6 LE floorstanders; later switching to Focal Sopra No.1 standmount speakers. Since there’s a phono stage built into the T+A, it was plugged straight into a line input.

The T+A has a wonderfully delicate touch with music, creating an immense, gorgeously textured soundstage that envelopes you, rather than forming a two-dimensional wall.

Listening through Jeff Wayne’s “The War of the Worlds” from start to finish was an emotional rollercoaster, with the G 2000 R imparting plenty of bounce to the ominous funk of the Martian death ray. It showed exceptional realism and imaging when faced with Richard Burton’s centrally placed narration, and just the right amount of subtlety during the transitions. It could have offered a little more treble attack to give percussion some extra snap, but that’s really my only complaint.

Spinning a variety of dance tracks revealed more of the same – bouncy bass, great timing, an immersive soundstage, and slightly reserved treble. The G 2000 R exhibits such unshakeable grip on the music, helping to reinforce the bottom end and resulting in magnificent depth. It has the authority of a direct-drive turntable, which is probably the result of T+A’s investment in that advanced motor and DSP-controlled voltage regulation.

With acoustic folk such as Gregory Alan Isakov and Josh Ritter, the mid-range clarity proved a perfect match for the Focal Sopras, which thrive on great vocals. It was an addictive combo. 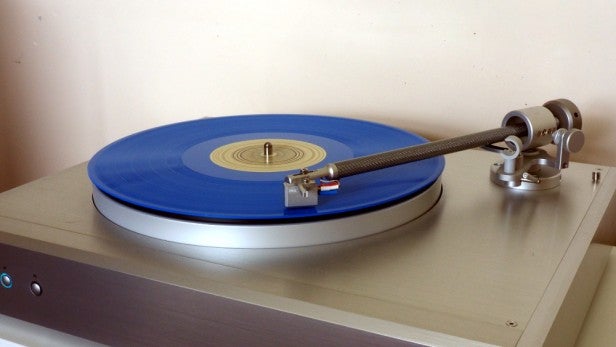 The G 2000 R MC isn’t a cheap turntable solution by any means, but you have to weigh up the amount you get and the quality of all the components. In the sort of hi-fi setup this turntable deserves, you might easily pay more than £1k just for a phono stage – a cost saved thanks to the one built into the G 2000 R. The price of most high-end turntables also doesn’t include a cartridge, and many don’t even come with a tonearm. Looked at as a whole package, the T+A could even seem reasonable. Kind of.

As with most one-box solutions, the performance of this one can be beaten by mixing and matching components for the same price or less – but beaten only slightly, and obviously without the convenience and simplicity of setup. Only a slight lack of attack holds it back from being a perfect all-in-one vinyl solution.

The finest plug-and-play turntable that (a lot of) money can buy.