I know we had a few negative points to make about Syphon Filter: Dark Mirror when it arrived last August, but it really is one of the best games on the PSP. Surprisingly Gabe Logan – the perennial B-lister of the stealth-action genre, did what Sam Fisher couldn’t do before and Solid Snake couldn’t quite manage after: deliver a hot slice of high-tech, super-spy thrills that worked perfectly well on Sony’s handheld console. Visually it’s one of the strongest titles on the system, but more importantly it managed to cram the kind of full 3D movement, climbing, crawling, melee combat and some solid duck and cover gunplay we’d expect from a PS2 game onto the PSP’s tiny screen and rather less flexible controls. Well-paced and genuinely exciting, Dark Mirror was a beacon of hope for owners of Sony’s oft-derided handheld. 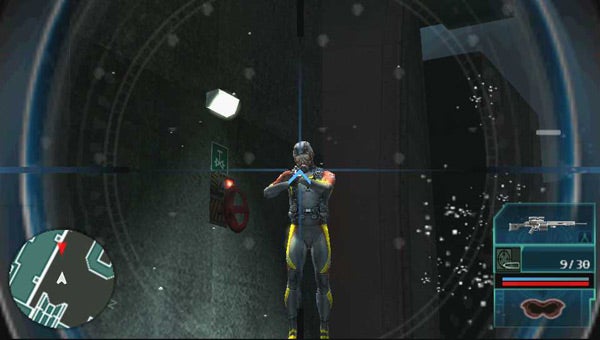 Now Syphon Filter: Logan’s Shadow comes to put a few more logs and half a can of lighter fluid on the flames. As was the case with most sequels before everyone became obsessed with franchises and reinventions, it’s really just more of the same, but better. However, in this case that’s not actually such a bad thing.


For one thing, Dark Mirror was already so far ahead of most PSP games visually that the engine only needed a few tweaks to keep it ahead of the game. And tweaks it has got, not just in the form of improved character modelling and animation – Gabe looks a little less square this time around – but in the form of some superb water effects and some great dynamic lighting, complete with this season’s must-have, bloom. You can tell the guys at 989 Studios got carried away with both, as early levels around and inside a terrorist captured Navy vessel seem designed specifically as a showcase for them. Architecturally speaking the levels seem a little more varied and more interesting, and the textures seem to have a bit more detail too. Throw in a good action-movie soundtrack and some fine gunshot and explosion spot effects, and Logan’s Shadow feels even more like the full-scale console experience it’s so clearly been designed to emulate. 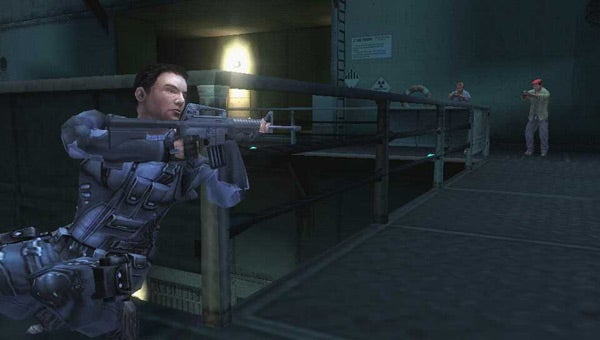 Tweaked, too, is the pacing. If Dark Mirror was already about 25 per cent stealth to 75 per cent gunplay, Logan’s Shadow seems to push the balance even more firmly in the noisier direction. You spend a lot of time hiding behind a doorway or lurking with your back to a low wall, preparing to pop out and blast the nearest bavaclava-wearing goon with something special from the game’s fine stock of weaponry. The level of challenge is just about right. Between a recharging health bar and plentiful supplied of flak jackets it’s not hard to keep yourself alive and everything hostile in the vicinity dead, but if you neglect to find cover or try the old ‘rush n’attack’ routine, you won’t last long at all.

There’s some solid tactical play, the game feels more sure-footed in its bigger set-pieces, and there’s even room for a few cool Bond-style underwater sequences to boot. You can see the new Havok-based physics at work as things blow up and bodies get thrown around, and the game also packs in better AI sidekicks than its predecessor. Add better checkpointing and fewer of the sudden surprise deaths that spoilt Dark Mirror, and there’s very little to stop you getting caught up in Logan’s Shadow. 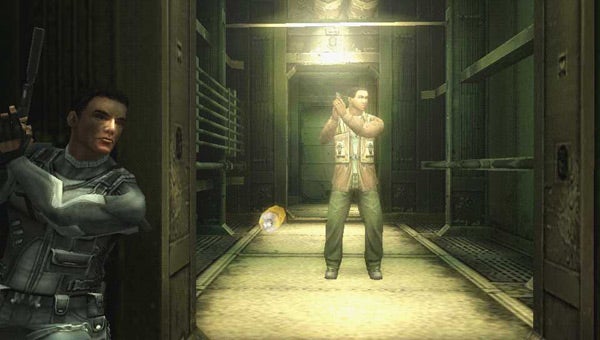 But our big worry about Dark Mirror was never that it wasn’t a great PSP game – we freely acknowledged it was one of the finest on the system. Our problem was that if you had to rate it as an action game – not just a PSP action game – it still felt a little second rate. In fact, it felt like a PS2 game redesigned to work around the limitations of the PSP, rather than a game you’d be delighted with had it emerged on any system.


Well, that feeling hasn’t entirely disappeared. In fact, the action genre has moved on a lot since August 2006, and the gulf between Logan’s Shadow and what’s available on other platforms is only getting wider. Of course, we can’t expect a PSP game to compete with Call of Duty 4, Gears of War or Uncharted, but I’d be a liar if I didn’t admit that a few things about this one really do annoy me. 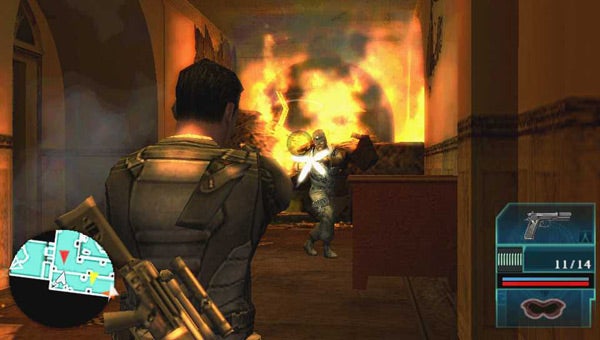 We’re mostly talking controls and AI, and to some extent both are limited by what the PSP hardware can do. You see, both are good by PSP standards, but not by the standards set by other games. Your foes aren’t total morons – they know when to duck behind cover, and they know that sometimes you have to leave that cover to attack. Yet this means that when they’re not doing the old ‘Hello, here’s my head, shoot it now while you have the chance’ manoeuvre (years of playing FPS games has taught me that it’s rarely effective) they’re merely blundering straight towards your waiting sights. In a game this combat intensive, this can make each encounter a little too much like the last.

But given the slow and imprecise way you have to target shots using the face buttons, sloth-like, stupid enemies are probably all Gabe can cope with. Using the analogue nub to move and the fact buttons instead of a console’s right stick to target might mirror the way things worked on the a Dual Shock, but they don’t make it any easier to turn quickly or keep a moving target in your reticule. Often, Logan’s Shadow leaves me wishing for smarter, faster opponents and an auto-assisted sight to help you track them down – a bit like the console versions of Call of Duty 2. It might help keep the action that bit more fluid, and it might also make the game a bit more rewarding to play. In a game this linear, and with less emphasis on interesting puzzles or using Gabe’s collection of cool spy gadgets this time around, the quality of the combat sometimes lets things down. 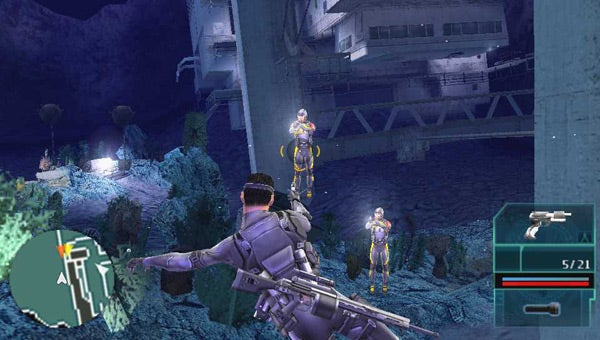 Still, let’s not get too downbeat. No, I wouldn’t play Logan’s Shadow if I could be playing CoD4 or Crysis instead, but when I’m away from the big screen it’s still the most convincing handheld action game to date. I can forgive the poorly pre-rendered cut-scenes, the shockingly generic characterisation and some of the most clichéd, third-rate-copy-of-a-Tom-Clancy-book dialogue I’ve heard in ages just because I find myself more and more gripped by the game as it goes on. Who is the mysterious Chinese agent? What was the mysterious cargo in hold 5 of the USS Mount St Helens? Will Gabe ever find his lost personality? All of these, bar the last, will be answered by the time the game ends. As the action moves fast from exotic locale to exotic locale, it’s a bit like watching a Bond movie from the later Roger Moore period: you know the acting will be questionable and the storyline is only going to get more ‘bobbins’, yet it’s strangely exciting, nonetheless. 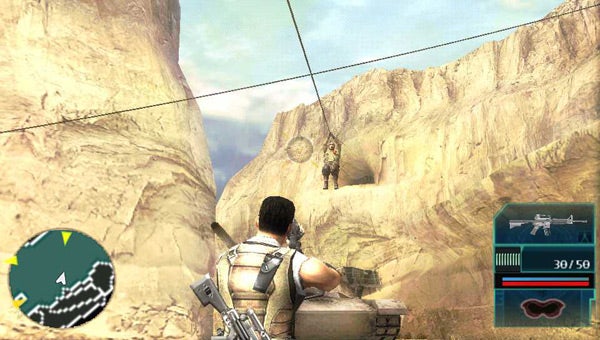 Bung in enhanced multiplayer facilities (both ad-hoc and online) and you still have one of the few PSP action games you’ll be delighted to play through right to the end. I suppose I’ll never stop hoping that PSP developers might one day stop trying to squeeze console titles onto a handheld and start thinking outside the box instead, but if this is the way they’re still going, then at least Logan’s Shadow is the best attempt yet.


Hardware limitations still damage the overall brilliance of Logan’s Shadow, but we can safely crown Logan’s Shadow as the new king of action games on PSP.