This is the small business focused four-bay follow up to the DS414 (a ‘DS415’ is due soon). The critical difference here is the DS415+ is optimised for encryption while it still delivers the same multimedia expertise as its consumer-focused stable mate. To coincide with this comes a change of chipset and a higher asking price, so is it worth it?

More than a year has passed since the DS414 range was launched, but nothing has changed with the exterior and – quite frankly – nothing needed to. The DS415+ therefore still has a plastic chassis, but it is rock solid with a matt, textured finish that resists dust and fingerprints and a glossy front fascia which pops on and off to access the drives.

At 233 x 203 x 165mm and 2.05Kg is it also exactly the same size as the DS414 (we’re sure it’s the same chassis) and just 30g heavier. NAS aren’t designed to win beauty contests, but the DS415+ is nicely minimalist and will blend into almost any environment which is all we ask. 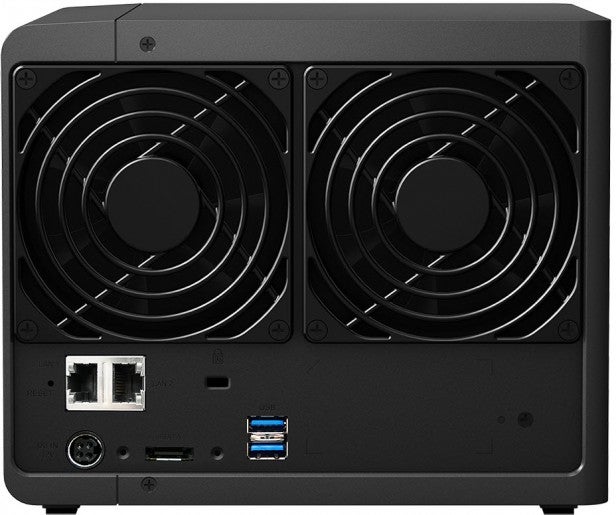 With its encryption focus, Synology has switched from the Marvell Armada XP (MV78230) chipset inside the DS414 to an Intel Atom-based quad core chip running at 2.4GHz and doubled the RAM to 2GB. There is also a dedicated AES-NI hardware encryption engine which does the heavy lifting on encrypted file transfers.

Meanwhile it retains the DS414’s four 3.5in HDD bays, support for up to 24TB of storage (thanks to 6TB drive support) and matching connectivity: dual Gigabit Ethernet (both for failsafe and Link Aggregation), 1x eSATA, 1x USB 2.0 and a pair of USB 3.0 ports. One gripe is that USB 2.0 should remain at all, especially as it is used on the front port, but most rivals still do the same.

A more pleasant continuation is the fitting of two large 92mm fans. Only one runs at a time to keep the NAS quiet, but the second acts as a backup should one break. This remains a differential feature and Synology does well to cram them into such compact dimensions.

Elsewhere the full array of Synology plus points come into view: Synology Hybrid RAID (SHR) – which enables hot swapping of drives and dynamic enlarging of the volume, the glorious DiskStation Manager (DSM) software and compatibility with DLNA, iTunes Server, Plex and Synology’s host of Android and iOS apps for remote access. The DS415 may have a business focus, but it remembers its party clothes. 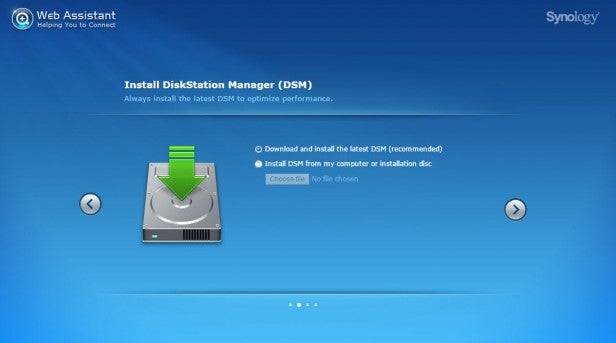 We have long praised Synology NAS for their class leading setup process and, while nothing has changed, the DS415 has no new unpleasant surprises either. The bay’s themselves remain tool-less allowing drives to be fitted in seconds and, once booted, the NAS can be detected simply by typing ‘find.synology.com’ into a web browser or running the company’s DiskStation Assistant software.

This prompts a setup wizard where you can name the NAS, decide on the RAID type, setup remote access and choose passwords. Synology sets up drives incredibly quickly so you’ll be up and running in less than 10 minutes.

All of which brings us to the DSM interface. Unlike rivals, which take a menu based approach, Synology has created a virtual desktop (with a number of OS X style references). This works a treat as it has natural language search, windows, the Synology app store and live widgets which display on the health of the NAS in real time. Even technophobes will be filled with confidence.