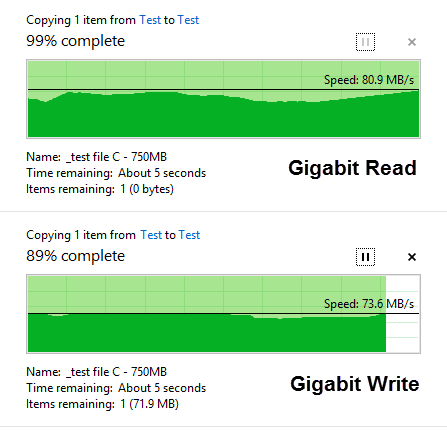 These
peaks fall some way short of the DS414’s benchmark 112MBps (896Mbps)
read and 97.3MBps (778.4Mbps) write speeds. The switch from the 1.33GHz
clocked ARM-based Marvell to Intel’s Evansport clearly hasn’t paid off
here, though it remains one of the fastest dual bay NAS we’ve tested.
The trouble is this does mean the much cheaper WD My Cloud gives it a
good run for its money with better reads of 92.4MBps (739.2Mbps) and it is just pipped on writes with 71.9MBps (575.2MBps).

Still given
the DS214play’s speeds far outstrip even the fastest 802.11ac wireless
network (and wireless is going to be far and away the access medium of
choice for a consumer oriented product) we doubt anyone will think the
NAS is slow.

Furthermore, in isolation, these speeds are up
there with some of the fastest pro Gigabit NAS systems in recent years
which shows their advancement. Equally important is the NAS stayed quiet
throughout our tests and idles under 20dBa, though this will vary
depending on the acoustics performance of the drives you add.

Despite
the drop off in performance, the reason Synology went for the Intel
Evansport in the DS214play is its native hardware transcoding. Synology
claims real time 1080p video transcoding is possible and we found this
to be the case. It isn’t going to compete with a powerful desktop or
laptop GPU, but the transcoding process is smooth and doesn’t stutter.

For
many this will be a key feature, particularly for those with iPhones,
iPads and Apple TVs which have limited native codec support. That said
if you use kit with wider codec support, like Android devices or WD TVs,
it isn’t vital and we did encounter a couple of transcoded videos which
refused to play – though these were few and far between.

Synology
also hypes the DS214play’s ability to quickly generate photo thumbnails
through Photo Station for snappy viewing. Again we are happy to report
this is the case, though we didn’t find it any better than the
Marvell-based DS414. When NAS are this quick there performance in this
area is pretty much a given. As ever the DS range of mobile apps also remains overwhelming
and, while we maintain many could be consolidated into simple ‘media’
and ‘productivity’ apps, no other NAS maker can match them. 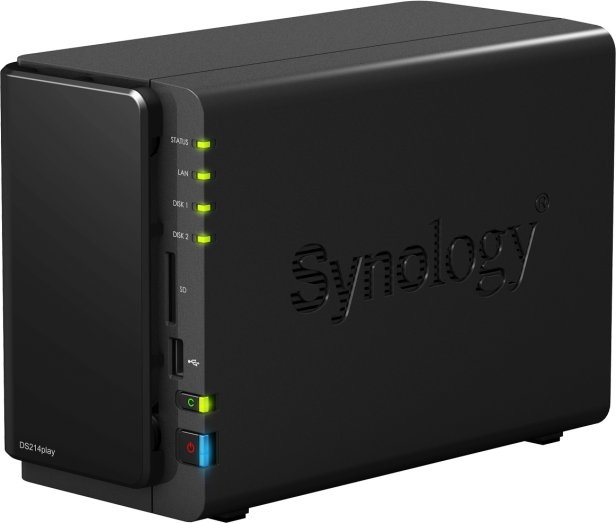 Should I buy the Synology DS214play?

With
its smart looks, excellent software and strong performance we still
have one caveat: price. The DS214play retails for £289.99 unpopulated
and while retailers initially sold the Synology DS414 for a surprising premium (£374.99) it is now available at the £349.99 RRP.

In
this scenario, unless SD and eSATA ports are vital to you, we’d save a
little more for the DS414’s extra bays and faster performance. In all
honesty much of the DS214play’s media friendliness is also provided by
software which is available on the DS414.

On the flip side those
looking for just a basic media streaming device will be sorely tempted
by the £129.99, £159.99 and £199.99 RRPs of the 2TB, 3TB and 4TB WD My
Cloud. Crucially though the My Cloud is a single drive device so there
is no data redundancy without external backup and it can’t match the
advanced functionality of the DS214play. When dual drive My Clouds
arrive that may change.

Until then the Synology DS214play is the best dual drive NAS we’ve seen, but we would still spend a little more for the DS414.

There
is no denying the DS214play is an extremely impressive device. It
continues Synology’s tradition of smart designs, seamless setups, bags
of performance and stacks of functionality. Against it is a price tag
which could push well past £500 with a pair of 4TB HDDs. With this in
mind we think the four bay DS414 offers greater value and while WD’s My
Cloud range will give you the basics for half the price. Ultimately the
DS214play is an exceptional device just be sure it is the device you
need.