Available on Xbox 360 (version tested), PS3, PC
Syndicate seems to polarise opinion. Haters hate it because it bears almost no relation to the classic action strategy series whose name it bears, and because it shares themes and some aesthetics with Deus Ex: Human Revolution, but isn’t anywhere near as smart. Lovers love it because it pays homage to a much-loved series and because it’s a very well put together shooter with some ingenious touches and an excellent co-op mode. For us, the truth is somewhere in between. Syndicate is by no means as soulless or generic as some have made out, but there’s no question that it’s not as good as it should be. 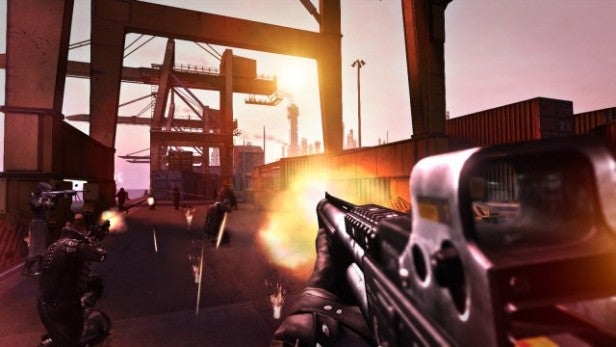 It’s not a car crash on the lines of Haze or Bulletstorm. It’s not even as ‘by the numbers’ as the single-player campaign in Battlefield 3. And yet it’s also not exceptional. If you buy it, you’ll play it and enjoy it and even think it’s great from time to time, but you can say the same about a wide range of shooters, many available at bargain-basement prices as we speak. Syndicate deserves a little better than that.

We also expect more from the developer, Starbreeze. With Chronicles of Riddick: Escape from Butcher Bay and The Darkness, it was responsible for two of the most stylish and innovative shooters of the last decade, and 2009’s Chronicles of Riddick: Assault on Dark Athena still carried the studio’s hallmark. With Syndicate, something seems to have gone awry. It doesn’t have the Starbreeze magic. 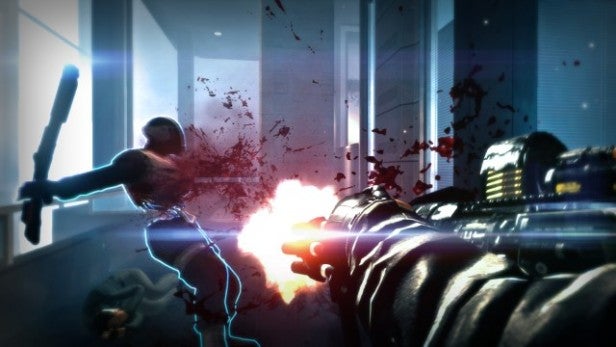 Let’s not be too negative. Bar the odd bland environment and possible the most badly-rendered ornamental trees in recent history, Syndicate is a good-looking game. It has a strong cyberpunk aesthetic, with a lot of cool blue glowing neon, and this feeds into everything from the in-game menus to the ammo counters to the enemy design. It has satisfying gunplay, with a good selection of meaty weapons, decent if unremarkable enemy AI and some useful slide and cover moves. The level design is – as with so many current shooters – ridiculously linear, but the maps are well-paced and the encounters are nicely set-up to offer a range of different challenges. It’s hardly a chore to play through. In fact it’s thoroughly enjoyable for most of its running time.

Syndicate also nods to the original games through its setting, and through its use of DART chip capabilities. The game takes place in a dark near-future, where rival corporations and their followers squabble over the markets of the world and those squabbles spill over into violent corporate espionage and high-tech warfare (one upside if this is the way things are going is that it might see some of the shriller Apple/Android/Sony/Microsoft fanboys wiping each other off the map).

As in the nineties Syndicates you play a corporate agent, specialising in assassinations, IP theft and anti-corporate black ops, and your role has a few perks attached. Firstly, you can ‘breach’ the processors used in enemy security devices and – more importantly – embedded in enemy agents. By doing so you can open gateways, cripple armour or even defuse grenades in the air, but you also have three ‘apps’ you can deploy to give you an edge. The first, suicide, causes vulnerable enemy agents to top themselves. The second, Backfire, causes enemy weapons to malfunction and explode, dealing damage and stunning your foes for a second. The third, Persuasion, forces an enemy to turn on his comrades and open fire. 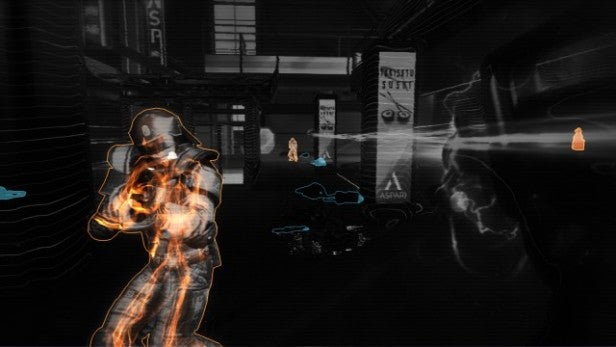 On top of these, you can trigger a DART 6 Overlay which alters your perception and improves your combat capabilities for a limited period. Time slows down, enemies are revealed as glowing forms, even behind cover. Your bullets do more damage, and your health can regenerate faster. DART 6 Overlay has a cooling off period, so like FEAR’s slowmo mode you need to use it tactically if you want to survive the game’s overwhelming odds.

These abilities make Syndicate more than just another shooter, but not an awful lot more. They alter the gameplay, but they don’t really shake it up in the way that FEAR’s slowmo, Deux Ex’s implants or Crysis 2’s nanosuit did, partly because the levels only allow so much freedom to experiment with your toys. This is the game’s biggest source of disappointment. We can live with an all-out action game and we don’t expect another Deus Ex, but we would like a Syndicate that gave you more scope to do more than just shoot. 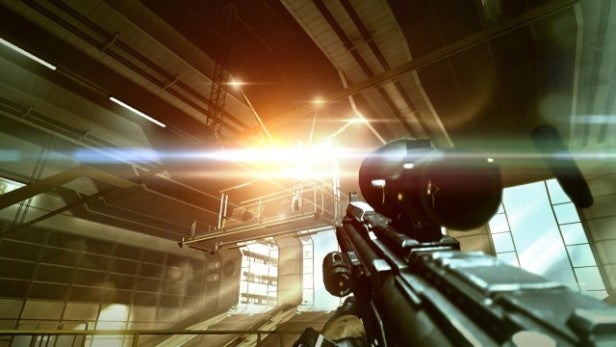 What’s more, Syndicate runs rather short of stuff you haven’t seen before, and it’s hampered by some really irritating elements. Do you like needlessly prolonged boss battles? Uninspired levels that take place on top of a moving train? Dull chunks of exposition that flesh out a story that, while well-scripted and well-acted, comes straight from the games cliché cookbook? You’re in luck. Sometimes Syndicate can be brilliant, particularly when you’re facing huge numbers of enemies, using every trick in the book to break them up and bring them down. At its best, it’s seriously good fun. But would we by remiss if we didn’t mention that it also feels tired and frustrating from time to time? Yes indeed.

The good news is that all is forgiven when you get to the co-op game. Rather than rework the single-player campaign for four players, Starbreeze has created a different set of stand-alone missions that take you through a number of different locations and situations. Your DART chip capabilities are cut-back, with no slowmo, suicide or persuasion, but you can still breach some enemy hardware, and you have some new healing powers which you’ll need to keep your comrades in place or get them back on their feet. 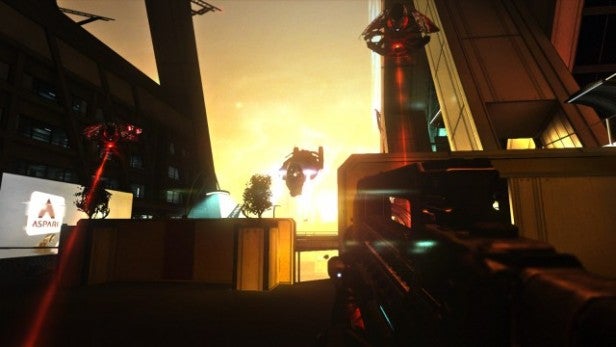 In co-op mode, Syndicate is everything a good co-op game should be. It’s fast-paced, relatively simple and awesomely violent, with hordes of enemies to dispatch and a nice balance between cooperation (if you don’t look after each other then the whole squad goes down) and competition (kills earn experience, and there are chips to extract from key enemies to buy you extra powers). As you level up there are chip upgrades and weapon upgrades to unlock, and you gain more flexibility to outfit your character for your own play style. We’re not talking mere perks, but a game with a decent long-term draw. 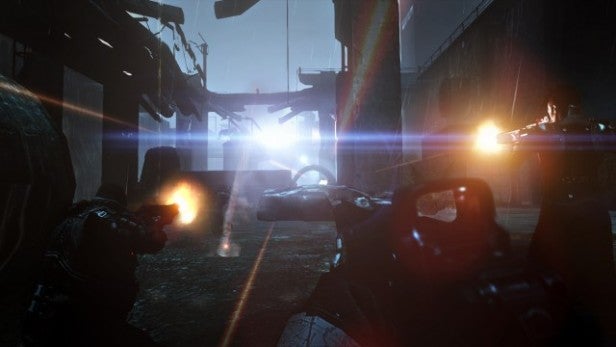 The available maps have more space to roam around and try different approaches and objectives, and there’s something about playing Syndicate with four agents that just feels right. As a single-player game, Syndicate captures some of the amoral tone, gruesome humour and cyberpunk look of the original games, but it’s only with a team that the name starts to feel appropriate. While we couldn’t hand on heart recommend Syndicate just for the single-player game, it’s worth thinking about as a great co-op experience with an okay solo campaign bolted on, and we’d hope future DLC would just extend this.

Verdict
Syndicate doesn’t do justice to the name, but it’s a perfectly serviceable solo shooter with an excellent co-op mode.  What’s disappointing is that with some more imagination, more cybernetic toys to play with and more interesting ways in which to use them, this could have been so much more.