Introduction
Mobile phones are great. The sheer number of things you can do with them these days is quite staggering. But, one thing they aren’t so good for is actually using them to make calls. They’re small and thin so can be difficult to keep a firm grip on, and are next to impossible to wedge inbetween head and shoulder. Then there’s the health risks of holding a phone next to your head. The research may largely be pointing towards there being little risk to humans but there’s still an argument for saying we should avoid exposing ourselves to the microwaves that are your phone’s signal.

All of which has lead to the situation we’re in today where you can buy a wealth of accessories that turn your sleek, slender, pocket friendly mobile phone back into a large, desk-bound device that’s actually nice for calling. And, just such an accessory is the SwissVoice CH01. 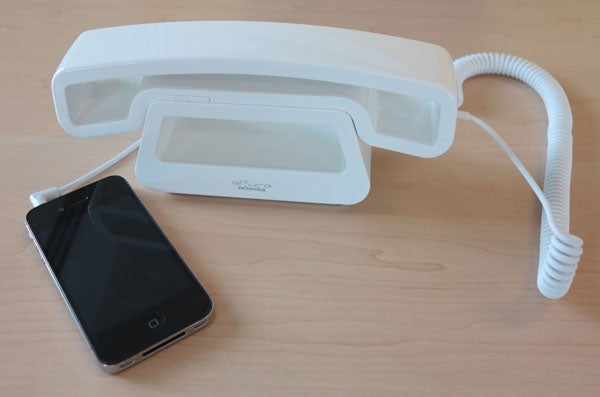 Design and Features
This stylish plastic phone shaped device plugs into your mobile’s headphone jack and takes over voice-in-and-out duties. It can also be used to control volume, skip/play/pause tracks if you’re listening to music or answer/start a call.

Available as either just the handset (CH05) or with a plastic base/cradle (CH01), SwissVoice has certainly got the first part of the phone accessory equation right – it’s stylish! 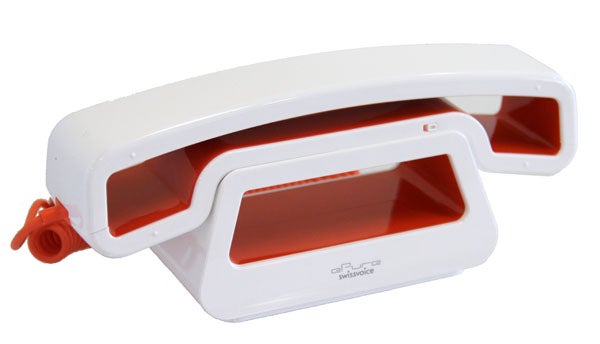 It’s available in TR orange? Well then it must be good!

Following the same design ethos as the company’s standard Dect phones, the handset is angular and hollow, with a range of colour options – blue, green, orange, pink and white – available for the middle. The effect is really charming, marrying a retro vibe with a suitably modern feel. It’s pretty compact too, with the whole assembly having a footprint little bigger than the handset itself.

Build quality is pretty good too. The glossy plastic looks and feels great while the various buttons and other features are all well seated and tough. For instance the attachments for the cable are strong yet flexible, suggesting they’ll last a good while before inevitably giving way. Meanwhile the buttons have a good, solid, discernible click so you’re sure when you’ve pressed them. 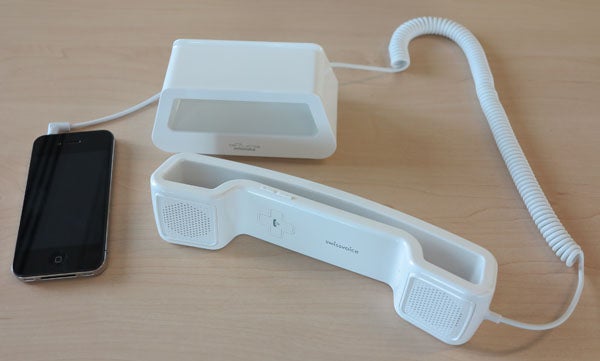 The base of the CH01 also ticks all the right boxes in terms of design. It’s nicely finished with a matching style, has four grippy rubber feet to prevent slippage and it’s weighted to stop itself being pulled off the desk when yanked by the phone’s cord. We found that if planted on a not-too-slippy desk the phone cable could extend from its standard slack 45cm or so to around 1.5m before starting to pull the base with it.

You can use the base as a completely dumb rest and plug the handset straight into your mobile, giving you the option of walking around completely untethered, or you can plug both phone and handset into the base so that the base acts as an anchor for both.

What the base doesn’t do, though, is interact with the handset in anyway. Pick up the handset when your phone’s ringing and it doesn’t connect the call. Put it down and it doesn’t end the call either. Both were features we missed having.

There’s something else missing too; there are no number buttons for dialling. We missed being able to just bash in the numbers for friends, family and colleagues that we regularly called and knew the number’s of. Instead, a trip to your actual phone is required everytime you want to make a call, that is unless you own an iPhone 4S in which case you can get Siri to help out.

By pressing and holding down the central plus-shaped button you can invoke Siri then talk into the handset and ask to call either a number or someone from your phone book. It’s a system that works very well but obviously isn’t always ideal, and is generally slower than just dialling the number. 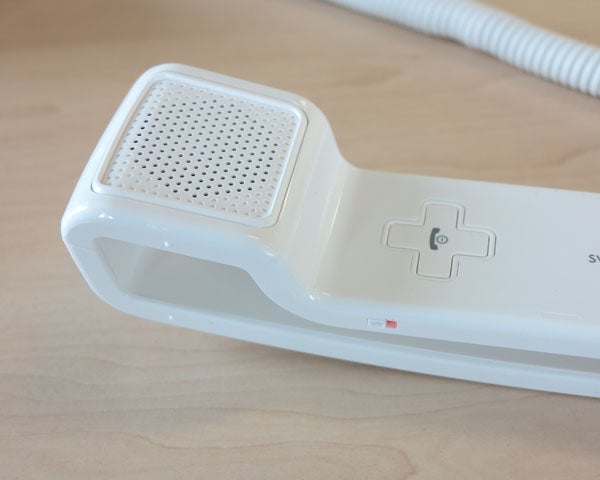 A slide button on the side of the handset lets you flip between “made for iPhone” mode and normal phone mode. The former makes the phone compatible with iPhones, providing the aforementioned Siri compatibility as well as volume control (via the buttons on the side of the handset) and music playback/call answering control via different numbers of taps of the main button. Out of iPhone mode it can perform many of the same functions for other phones, though compatibility varies – we tried on the Galaxy Note and Galaxy S3 and found that the volume control didn’t work but the central button did for playing/pausing music and answering/hanging up calls.

Performance
When we first put the CH01 to task with a few test calls, we were genuinely shocked that it picked up so much noise from our phone signal – surely such a basic mistake couldn’t have been made? Thankfully, it hasn’t. While the handset does occasionally pick up some interference the majority of the time it is noise free. Only every now and then will you get those beeps and whistles from the mobile signal.

We weren’t all that blown away by sound quality, though. It is a step up from most mobiles but it’s not exactly Hi-Fi. As such, the only real benefit here is the ergonomics (and style) of the device. Admittedly this counts for a lot, as it’s just nicer to hold and you can more easily hold the phone between head and shoulder for when talking while typing, note taking, thumb twiddling, washing up, arm wrestling… 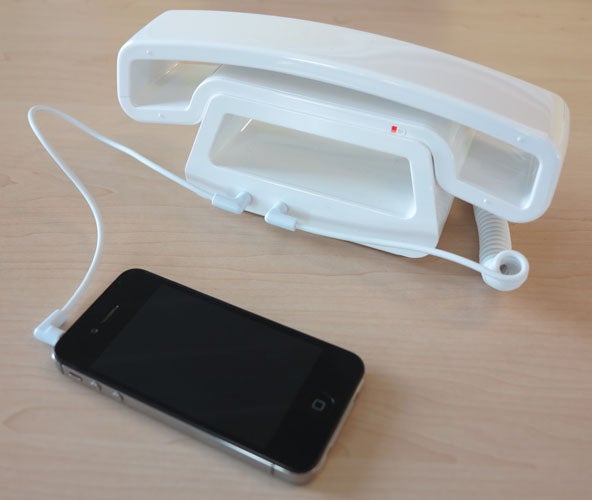 Verdict
Ultimately, though, while the SwissVoice ePure CH01 has some uses and a charming design, its performance isn’t quite good enough to come close to a recommendation. Value isn’t the concern – at £35 it’s not overly pricey – but if you’re actually looking for something to improve on every shortcoming of mobile phones when it comes to making calls then this accessory doesn’t quite fit the bill. If you simply want the ergonomic benefits of a proper handset then it does the job.