About a year ago I looked at a great little gadget from SwissBit that combined a Victorinox Swiss Army knife with a 128MB USB memory key. The beauty of this product was that I always carry both a USB memory key and a small Swiss Army knife with me anyway, so combining the two made perfect sense. In fact, there were only two problems with this little gadget – one, the 128MB capacity soon became restricting and two, it fell out of my pocket one day and I lost it!


So, for quite a while I had to go back to my original method of carrying a small Swiss Army knife and a separate memory key in my pocket, but all that has changed recently. Yes, the nice people at Swissbit sent me over the latest version of the SwissMemory Victorinox, and this time it comes with a far more generous 1GB capacity. 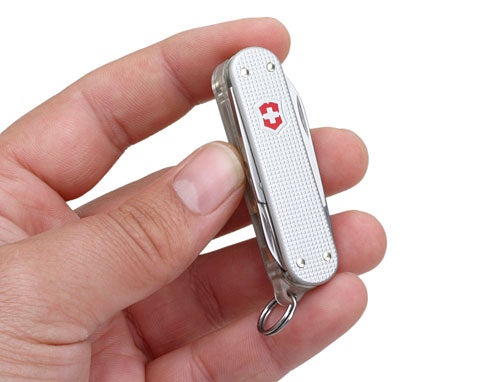 But it’s not just the capacity that makes this new SwissMemory Victorinox cool, it’s also a very different design from the previous version. Whereas the original device I had was finished in the traditional Swiss Army red plastic, this one is flanked by hard wearing textured aluminium.


Hiding inside the swanky aluminium casing you’ll find a pair of scissors, a knife and a nail file/screwdriver. Unlike the previous SwissMemory Victorinox, there’s no pen or torch integrated into this one. Of course you can buy a SwissMemory Victorinox with the red finish, which includes both the pen and a white LED torch, but it will cost you a little bit more.


The 1GB USB memory key folds out easily and can be plugged directly into a USB socket. The memory key can be removed completely from the knife, which is handy if you need to take it with you on a plane. Once removed it becomes apparent that this is one of the smallest 1GB memory keys you’re likely to find.

As far as performance goes, this is a pretty nippy little flash drive. Writing a 110MB zip file to the SwissMemory Victorinox took only 13.5 seconds, while reading it back took only 11.1 seconds. I compared this to my trusty Swissbit TwistPro 2GB memory key which managed the write at 21.5 seconds and the read at 14.5 seconds. So the SwissMemory Victorinox is definitely fast, but it’s a huge improvement over the old model which was limited to the USB 1.1 standard.


Of course USB memory keys are generally quite utilitarian, and differentiating between them can sometimes be hard. However, Swissbit at least tries to throw in some added value with its products. The SecureLOCK utility allows you to create a protected partition on the device that is inaccessible without the correct password. When you’ve got 1GB of capacity at your disposal, it makes sense to have at least part of this password protected for those instances when you’re carrying sensitive data.

I’ve seen the SecureLOCK utility before, but something that I hadn’t seen before is the Travel it Easy utility that also comes preloaded on the device. This little application is absolutely superb and has a number of very useful features. Using Travel it Easy, you can synchronise all of your Internet Favourites so you have them with you all the time. You can also use the Travel it Easy utility to ensure that you leave no personal data on someone else’s PC when you’re using it. This is called “No Trace Browsing” and what it means is that if you launch Travel it Easy before you start browsing the program will delete you history, favourites, temporary files and all cookies once you’re finished. This will be particularly useful if you have to use an Internet café and a worried about leaving any of your info floating around on the system. 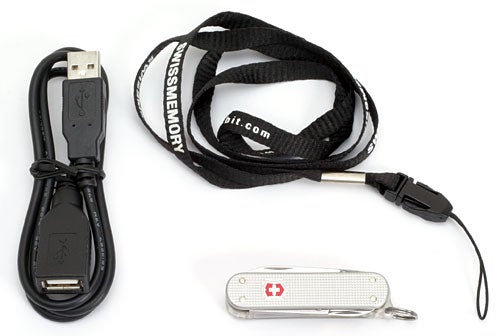 
You can also password protect everything on your memory key with Travel it Easy, while if you have a habit of losing things, you can also enter your personal details into the “lost and found” tab. The idea being that whoever finds the device will read the lost and found file and return it to you – although to be honest they’re more likely to put it straight in their pocket and keep it there, or maybe I’m just too cynical. 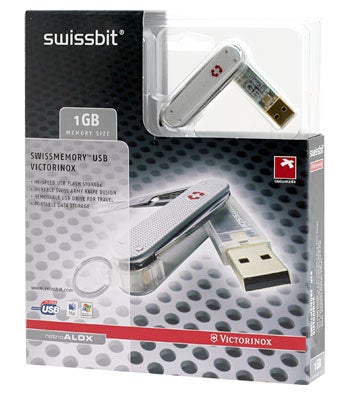 In the box you’ll find the knife/memory key itself, a lanyard for hanging it round your neck, a USB extension cable and driver CD for anyone running a version of Windows prior to 98SE.


As with any innovative product, the SwissMemory Victorinox doesn’t come cheap and this 1GB version is going to set you back a not insignificant £88.12. That said, a decent 1GB USB memory key will cost around £60 and then a small SwissArmy knife will be about £15, so you are paying al premium for having everything rolled into one, but the convenience somewhat makes up for that.


All in all, the 1GB SwissMemory Victorinox is a very handy device. It has a decent amount of storage, solid transfer rates, some useful pocket tools and an excellent software bundle. I’m a little torn as to whether I would rather have the red version with the pen and light, but then I do really like the silver aluminium finish as it’s more robust. Ultimately, whichever one you go for, I doubt you’ll be disappointed.


The SwissMemory Victorinox 1GB is a great little device that rolls two very useful gadgets into one. If you regularly carry around a pocket knife and a USB key, give this a try – the software bundle just makes the package even more attractive.


It seems that my carelessness with SwissMemory Victorinox products knows no bounds. As if losing the first one wasn’t bad enough, I managed to accidentally put this latest device in my washing machine! When I found it, the memory key was full of water, so I shook out as much as I could and placed it in the sun for a couple of hours. Amazingly, when I plugged the memory key in, it worked perfectly and all my data was still intact. I’ve been using it for the past few days without incident, so it seems that this little device is pretty robust as well as innovative.