To describe the Swiss army knife as a multi-talented little tool is virtually tautology but it’s certainly true of SwissBit’s s.beat MP3 player. Riyad first encountered this player way back in the mists of October 2005, but as you can see, it took a long time for a review sample to get to us than the couple of weeks that Riyad predicted.


This player takes SwissBit’s previous melding of army knife and USB memory key to the next level – by adding an MP3 player. So if you’ve ever hankered after owning a device that contains two small knives, a small pair of scissors, a USB memory key and an MP3 player with integrated FM radio and record function, with a remote control, all in one pocketable package, then your dreams are fulfilled! 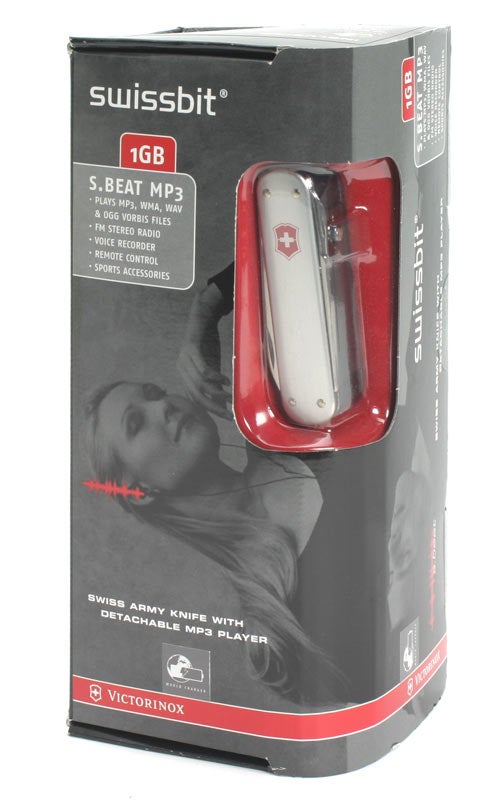 I must admit that the concept of an MP3 player that also sports a knife, (or vice versa if you prefer), is something of a worry, especially in today’s climate with a spate of stabbings being reported recently in the news. This player should not be given to children and should always be used responsibly.


Of course an MP3 player with a knife attached presents something of problem if you want to use it on a plane, unless you enjoy spending the whole flight on your own in the hold. SwissBit has thought of this and the MP3 player can easily be removed from the housing that contains the exceedingly sharp knife. Alternatively, you can but a tool-less version of the player, without the knife.


Our review sample was a 1GB version, with this number imprinted on the USB connector but a 2GB version is also available – and a 4GB version is also promised. The player can handle MP3, WMA and WAV, but also OGG Vorbis. This is up there with ATRAC as one of the best audio codecs around but it’s not that widely supported. 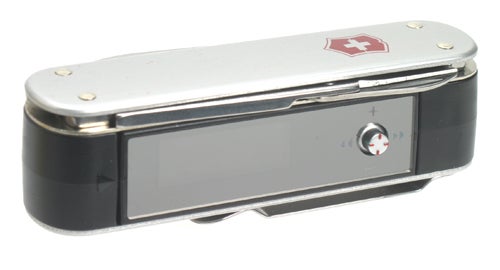 When taken out of the housing the USB connector at the end is exposed and SwissBit provides a cap to protect it. However, the cap could easily be lost but cleverly there’s a hole though one corner so you can hook a detachable part of headphone remote cable to the cap so you can keep it handy.


When housed inside its army knife frame the whole thing measures just 74 x 22 x 24mm and has a clip so you can easily attach it to a belt. The housing exudes solidity with a solid metal frame, as you’d expect of a Swiss army knife, the logo of which is featured on one side.

The player itself is a very angular oblong with a small three line display and only a single joystick to control it. On the opposite side is a headphone socket but this will only fit the supplied in ear headphones with integrated remote. On another side is a pin sized reset button.


The remote is quite stylised and features volume and skip controls as well as a power off and a hold slider switch. It also offers two headphone sockets- one the reduced sized for the bundled headphones and a regular 3.5mm socket. This means that you can use your preferred headphones but only with the remote. The remote does feature a clip for attaching to a shirt but considering that the player itself is so light and also has a very effective clip that the relatively bulky remote seems almost redundant. It’s therefore a shame that you have to use a remote to use your own headphones as I just don’t get on with any in-ear or bud style headphones of any type. However the two ports mean that you can share your music with one listening to the supplied headphones and another using a regular pair. 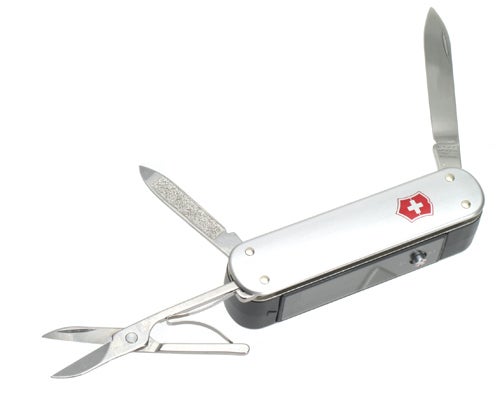 The player only weighs 32g, and thanks to a arm strap and holder can easily be used while jogging. SwissBit has added traveller appeal by including a very nifty universal travel adaptor. You plug the player into a USB extender cable, which plugs into a USB port in an adaptor that in turn attaches to the travel adaptor. Also supplied is a UK adaptor which can be used instead of the USB port enabling the travel adaptor can to be used with anything – a very handy addition.


For such a small player, with a tiny joystick I was fearful that it would prove to be a very awkward device to control. However, it proved to not be the case. The volume and skip functions do exactly what they say on the tin, but it took me a few minutes to work out how to get to the control menu. Holding it down will turn the player on and off but double pressing the joystick brings up the menu. From here it’s a fairly conventional layout, although it’s a tad hard to read on such a small screen. 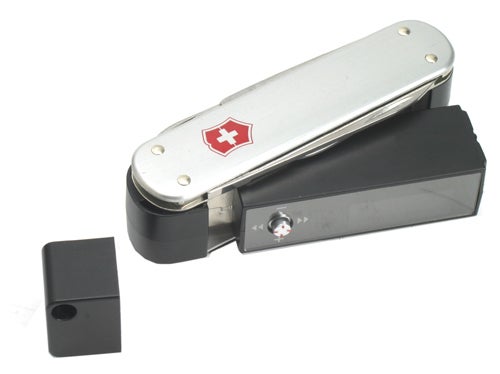 Getting tracks onto the player is quite straightforward. It hooks up via USB and you don’t have to use any kind of media manager – though with the latest firmware flash it is recognised my Windows Media Player so you can use that if you wish. You can browse tracks on the player by the file structure as you put them on the player, but if you use the ID3 tags you can also view by Album or CD as it’s called on the s.Beat, Artist or Style, more commonly known as Genre. The player actually sorts the tracks out itself, but if you’ve added new tracks you’ll have to wait as it scans though the contents. If you’ve got a full player this will take some time. There’s also a Book option for AudioBooks.

As you would expect, the s.Beat has equalizer options and play repeat modes. Sound quality was impressive – at least with my headphones. In the flat EQ mode, the sound was punchy, accurate and loud and dealt well with both full on dance and soft soul.


The voice recorder function worked surprisingly well, and the recording played back remarkably clearly, for what must be a very small microphone, though the player was held close to the mouth for recording. If you need more space you can actually delete files off the player itself thanks to the File Structure view.

The FM radio was possibly the least impressive part of the s.Beat, as it struggled to pick up a signal amongst the tall trees round the TrustedReviews offices. Other players I’ve tested have fared much better. I was only able to get a signal from Radio One when holding the player aloft like an Olympic torch – though some may argue that’s no loss.


While I was impressed by the player it unfortunately ended rather badly. After playing with it for a while I decided to look for an updated Firmware, a feature advertised on the documentation. I downloaded the utility and the most recent Firmware but unfortunately the process failed half way through for no apparent reason. This rendered the s.Beat into no more than a doorstop, albeit one only suitable for a very small door. 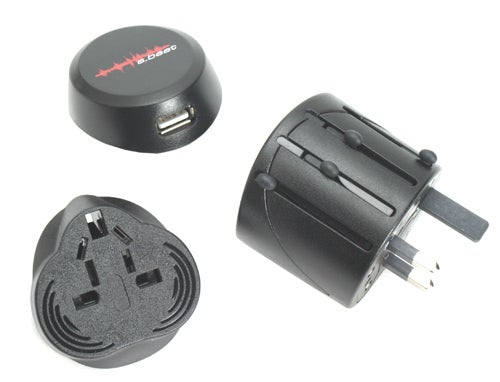 This was quite disappointing considering how well I’d got on with the player and it was fortunate I’d got to know the player before hand. Having received no response form SwissBit I can only hope that this is a one off glitch as when it was actually working, I liked the s.Beat as player.