Extremely powerful with a large tank that lasts for hours, the Swan 2600W Steam Station Iron SI14310N is the best steam generator iron for dealing with large amounts of ironing and stubborn creases.

The Swan 2600W Steam Station Iron SI14310N with its 100g-per-minute of steam, 6-bar pump pressure and ceramic-coated soleplate is a powerful steam generator iron. It can smooth out tough creases, and its big tank means it can tackle a large pile of ironing without refills. The vertical steam refreshes curtains, upholstery and clothes, and the self-cleaning function and replaceable cartridge anti-scale system lead to hassle-free maintenance.

It’s easy enough to set up the Swan 2600W Steam Station Iron SI14310N, following the genuinely funny paragraph about ironing. The only difficulty I had was that the filter was confusingly labelled as an “anti-scale cartridge”, which makes it hard to find. (It’s hidden behind the water tank and needs to be soaked in water for five minutes before first use. You’ll also need to buy a new one every couple of months.) The lilac water tank was easy to fill because of its large closable opening.

Swan recommends that you place the steam unit on a table beside the ironing board, or on the floor. There’s a good long hose from the steam unit to make the latter possible, but the floor would be a tiring place to put the steam unit because you can’t rest the 1.2k iron on its heel: it tips over.

This means you’re forced to set it down horizontally, either – very riskily – on whatever you’re ironing, or on the odd ridged plastic stand attached to the steam unit. Even with the unit on a table beside you, not being able to briefly rest the iron upright becomes annoying when you’re ironing something fiddly, such as a shirt. 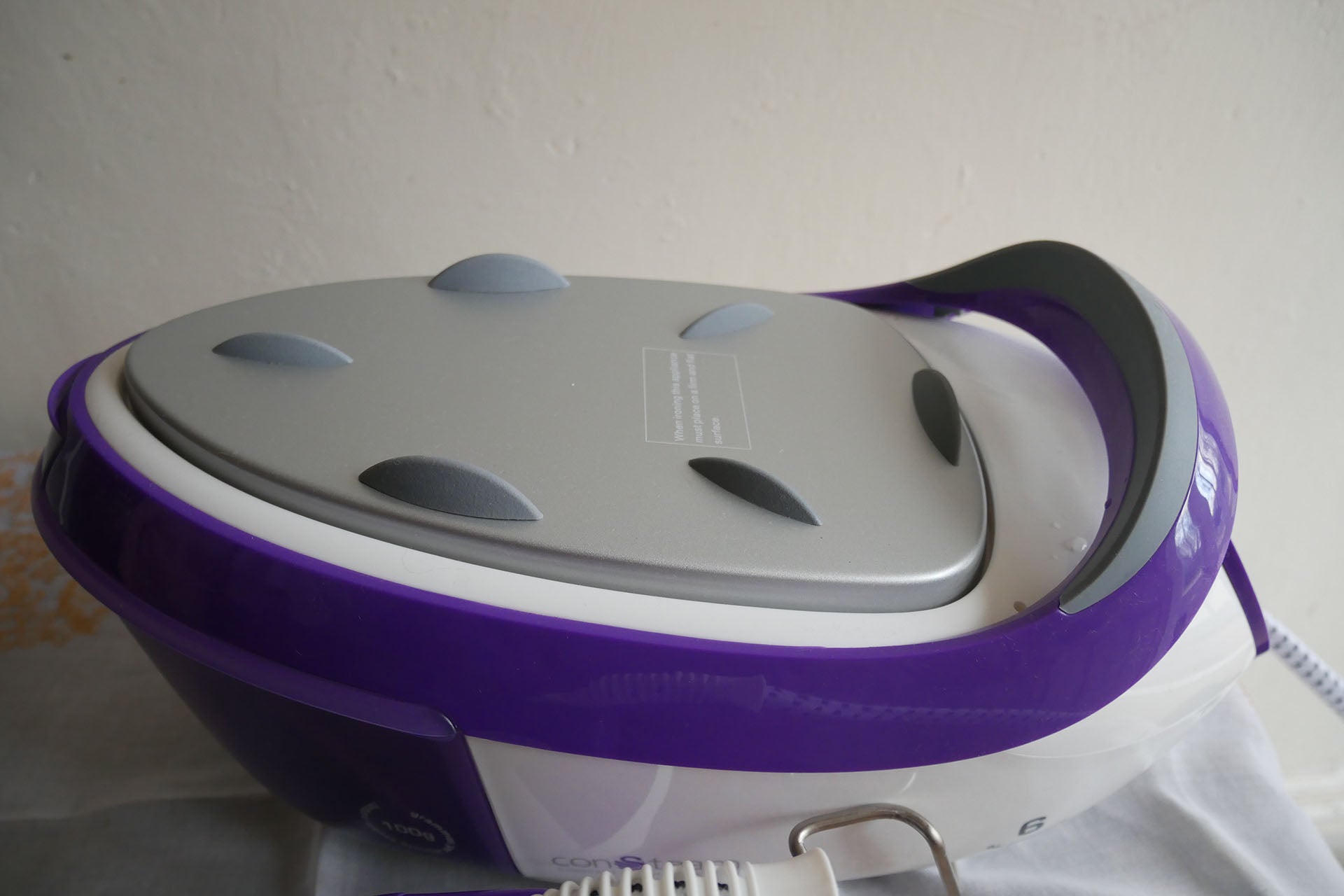 The iron has a useful notched tip for going round buttons, and a ceramic soleplate with 51 steam holes. There’s a trigger under the handle for the steam blast, which can be used vertically to steam clothes and fabrics.

When you switch the iron on and press the oval button on the top of the handle a light-up display is activated, showing four settings, each successively activated by pressing the button: synthetic, wool/silk, cotton, and max (approximately 88ºC, 135ºC, 190ºC 202ºC). There’s also an automatic shut-off, which switches the iron into sleep mode if it isn’t moved for ten minutes. 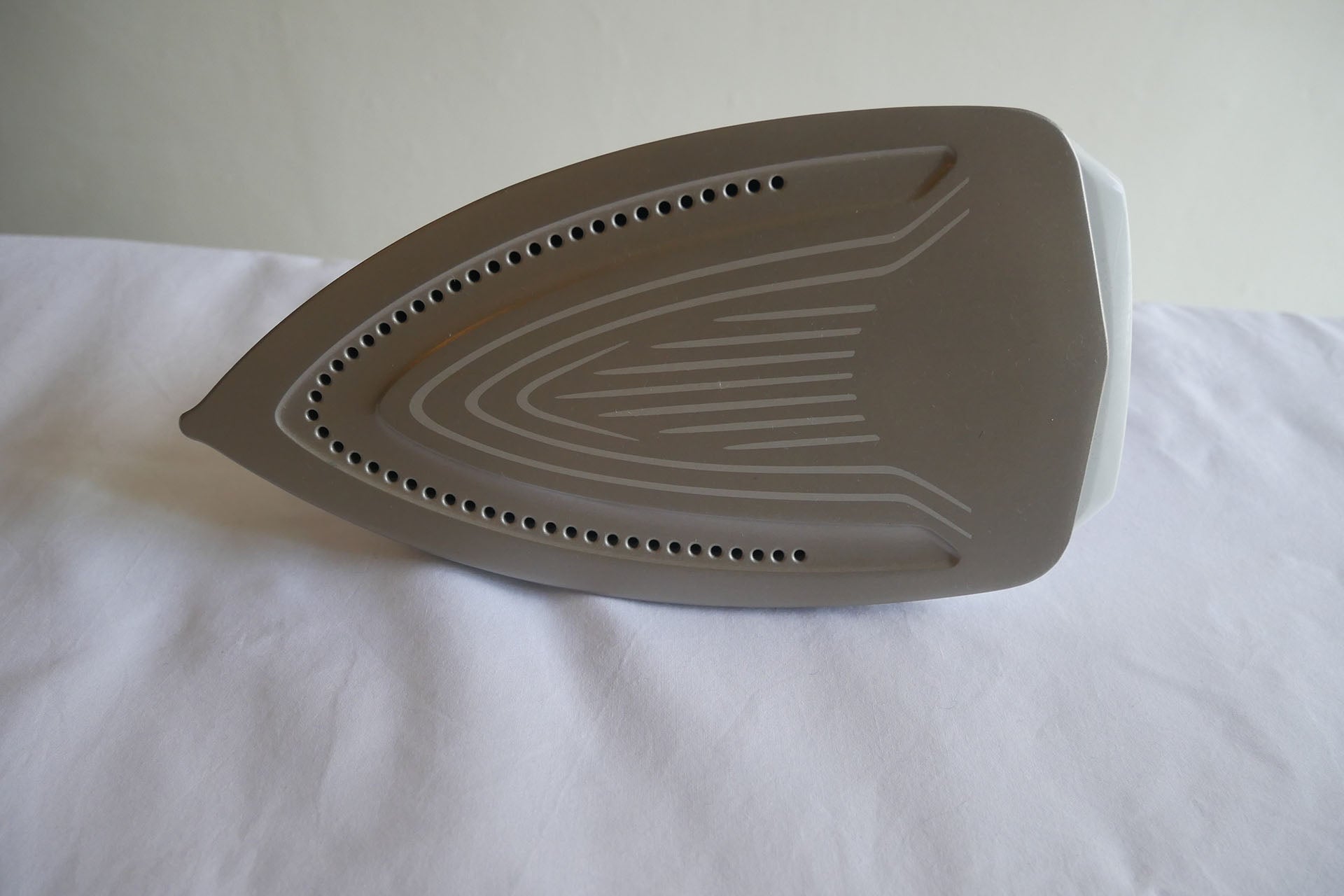 Swan advises using filtered, distilled, or bottled water if you live in a hard-water area. Given the relatively large 1200ml tank, the iron took a long 59 seconds to heat to the highest steam setting from cold, and the noise the water makes as it heats is a steady tapping, like a distant jack-hammer.

Once ready, the Swan 2600 glided easily over fabrics and produced a nice, crisp effect that got better as the ironing board heated up with steam. The powerful steam blast with its 6-bar pressure managed – after a number of passes – to get every crinkle out of my bone-dry, crumpled test linen tablecloth. This is the only iron that managed that accolade. 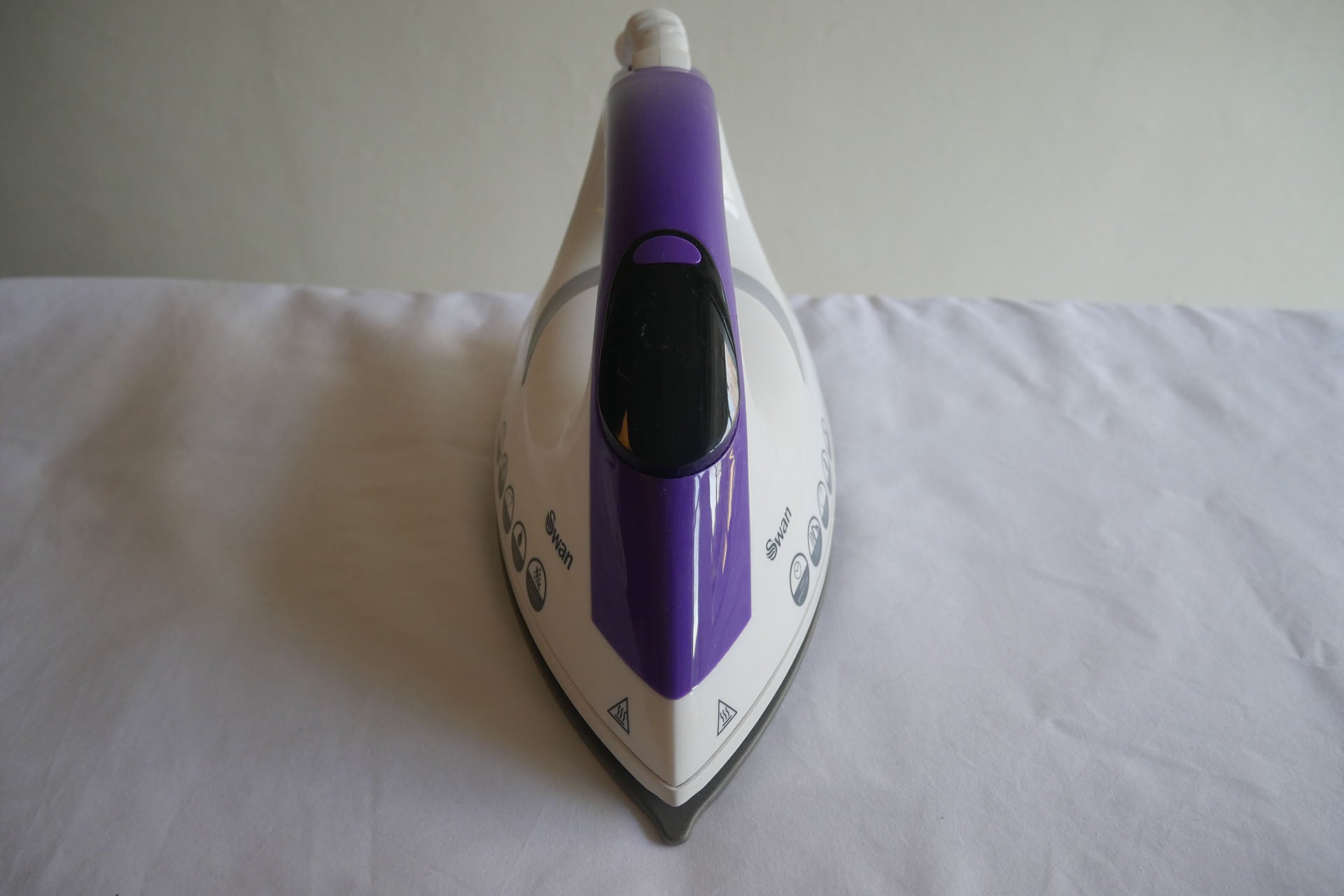 The Swan 2600W Steam Station Iron SI14310N’s notched tip gave a professional finish around shirt buttons, and the overall smoothness it imparted to pure cotton shirts was excellent. It ironed sheets and bedcovers well when they were folded in four, producing a crease-free look with sharp, professional edges, taking all the crinkles out of the bottom layer.

The steam comes out gradually, and the iron is so effective – even without continuously using the steam blast – that you’ll manage to get through a jaw-dropping amount of ironing from a full tank. I ironed on the hottest setting for 5hrs 7mins before it emptied – and this means you’d get nearly ten hours if you tackled a mixed load of fabrics. My room didn’t steam up noticeably either.

My synthetics ironed safely on the low setting, and sweaters looked good after using the wool one. Even the max setting was gentle enough for cottons and cotton mixes. The vertical steam blast really dropped the creases out of coats and suits.

You don’t need to regularly descale or clean the Swan steam generator iron; you simply replace the anti-calc cartridges. The instruction leaflet explains that how long they last is entirely dependent on the hardness of water in your area. If you don’t use bottled water then they could last two years in Halifax or two months in Bristol, for example.

The Swan 2600W Steam Station Iron SI14310N is great if you have a massive pile of cotton and linens to tackle. It was the very best iron in my tests for getting creases out. Unless you buy a silicone iron rest for it, however, it isn’t ideal for lots of shirts or fiddly dresses because you can’t stand it upright on its heel. If you’re looking for a cheaper, regular iron, check out our guide to the best irons.

If you’re after the best performance without making the room steamy, the Swan 2600W Steam Station Iron SI14310N is simple to use, and it cleans itself. This is the best model for those with lots of ironing to do.

Extremely powerful with a large tank that lasts for hours, the Swan 2600W Steam Station Iron SI14310N is the best steam generator iron for dealing with large amounts of ironing and stubborn creases.