The Suunto 7 is an solid fitness tracker come smartwatch which – on paper – has the chops to be a true Apple Watch 5 rival. However, issues with its WearOS software stop it from achieving its full potential.

The Suunto 7 is the first wearable from the Finnish fitness tech heavyweight to run Google’s WearOS.

It’s being marketed with the tagline “sports and life combined”, hinting that it wants to pull the same trick as the Garmin Venu and offer buyers a top-end fitness tracker that can genuinely double as a smartwatch.

For the most part it achieves this goal and it’s one of the best WearOS fitness trackers available. If you’re after a top-notch best smartwatch with all the bells and whistles that a serious athlete will need then the Suunto 7 is a solid choice. However, ongoing issues with Google’s software stop it being the Apple Watch 5 killer we’ve been waiting for. 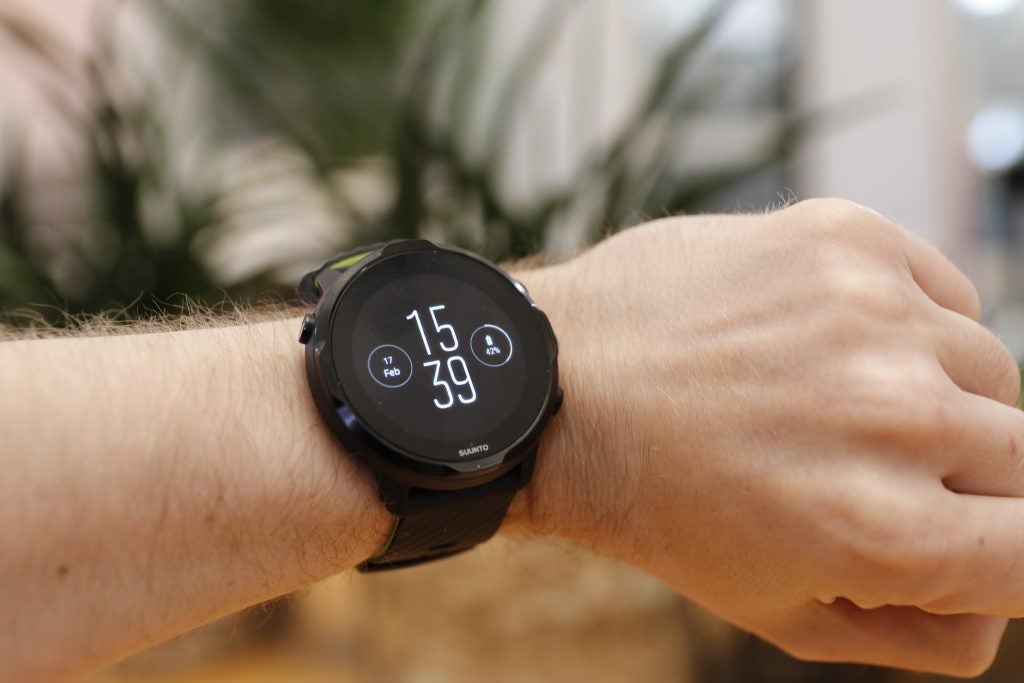 Though this may put off fashion-conscious buyers, I’m a big fan of the design as it ticks all the right boxes when it comes to durability, fit and functionality.

For starters, like Garmin Forerunners, it’s near-indestructible. Using the Suunto as my main tracker, it’s survived all manner of punishment. This included being beaten to hell when I had an unintended spill over the front of my bike’s bars and being accidentally smashed into the side of a free weight at the gym. The 50 ATM water resistance also let me use it while swimming, worry free.

I’m super impressed with the watch’s circular AMOLED touchscreen screen. The screen has a quoted 1000 nits brightness. I didn’t check the figure with a colorimeter but I found the display is bright enough to stay legible, even in direct sunlight. I never had any issues reading the watch, even when using it to navigate an unknown run route in very bright sunlit conditions.

The use of AMOLED tech also means blacks are wonderfully inky and the screen feels suitably vibrant. The 454 x 454 resolution is suitably sharp and I never struggled to read text on the Suunto 7, even when trying to read maps while hiking.

The physical buttons are a big selling point. As well as feeling suitably rugged they have a great tactile click that makes them a wonderful alternative to the touch controls, which can be a faff to use while exercising. The left button opens apps from the home screen and acts as a back control when you’re in a specific service. The three buttons on the left act as the main navigation controls in app. Though the top is set to launch the Suunto tracking app from the home screen.

My only quibbles with the design stems from its use of Gorilla Glass and distinctly smartwatch-level battery life. The glass is rugged enough for most things, but it can easily pick up scratches, especially when used in sandy conditions, like the beach. I’d personally have liked to see a Sapphire option to get round this. 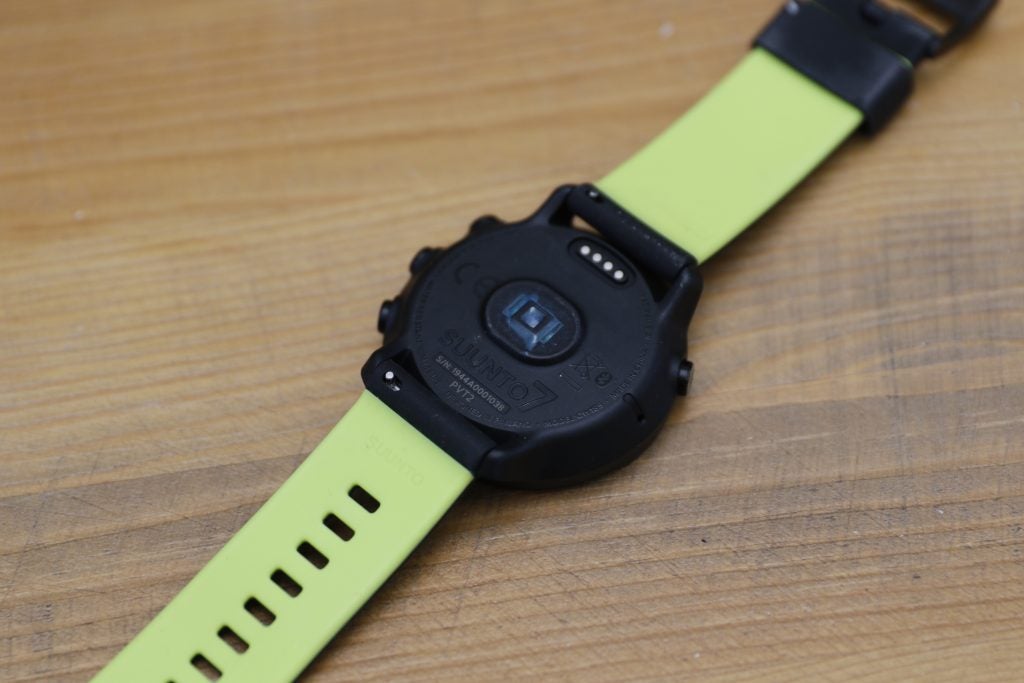 The quoted two day’s use is pretty par for the course for a smartwatch, but it’s very low for a tracker. Competing watches from the likes of Garmin, like the Vivoactive 4, have an eight day battery life. The 12 hours GPS life will also be an issue for hikers who want to use it for extended periods.

In real world use I also found two days is slightly optimistic. Using the Suunto 7 to track my 30 minute morning workout, and then using it as my primary smartwatch throughout the day, I generally got about a day to a day and a half’s use out of it at most.

It’s doubly irritating as, like every WearOS watch, the battery life could easily be improved if device makers took a page out of Apple’s book and tweaked the display to intelligently lower its refresh rate.

Battery life aside, the Suunto 7 is an excellent fitness tracker. The watch has the Suunto and Google Fit tracking apps, plus a selection of offline maps, pre-installed.

This means that out of the box the watch can track over 70 different workouts. These include everything from basic workouts, like running and swimming to more esoteric activities, such as roller skiing – I still don’t know what this is.

Testing the Suunto against the Fenix 6, I was fairly impressed and generally found the watch lives up to the firm’s stellar track record in the fitness tech space. With support for the GPS, GLONASS, QZSS and BEIDOU satellite networks, I never struggled to get accurate location and distance tracking. 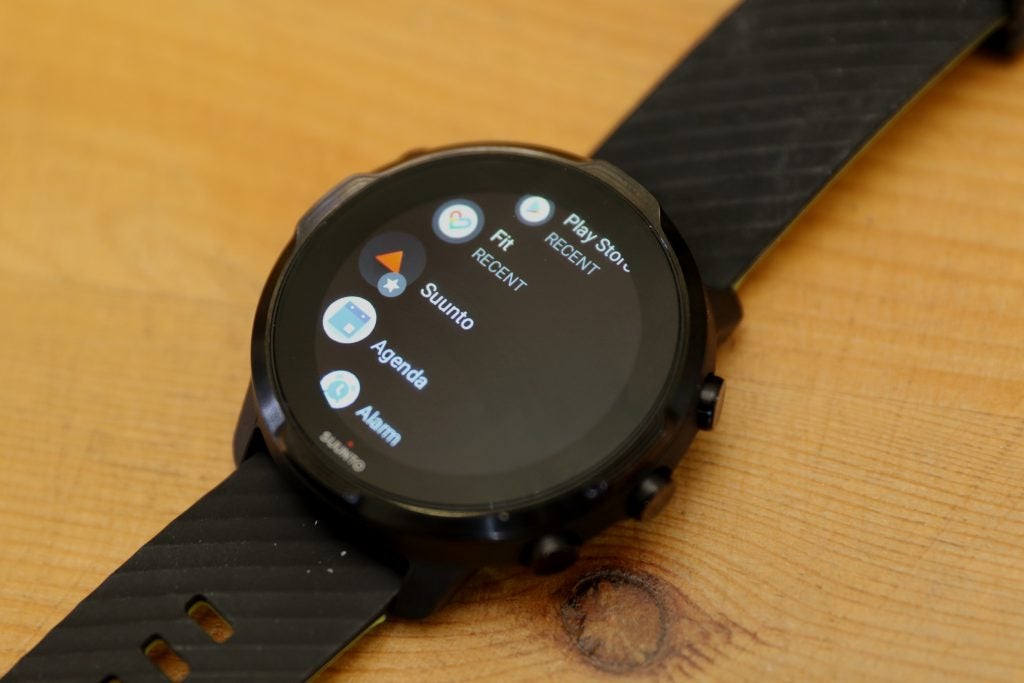 In general the GPS locked within less than a minute and stayed stable throughout my workout, even when doing runs in busy London areas. The inclusion of a barometer also means it can track elevations, which is great for trail running, hiking and climbing.

The offline map functionality is another perk that let me navigate my way around the countryside without having to reach for my phone, even when I couldn’t get a signal.

Post workout the Suunto app offers a reasonably intuitive breakdown of your workouts. Metrics include basic things, like heart rate zones, distance travelled and recovery time. This doesn’t match Garmin’s offering, which includes things like training effect and VO2 max estimates, but it’s still detailed enough for most athletes to track their fitness goals and progress.

The watch also works with all the third party services you’d expect, like Strava, which will be a boon for semi-serious athletes. 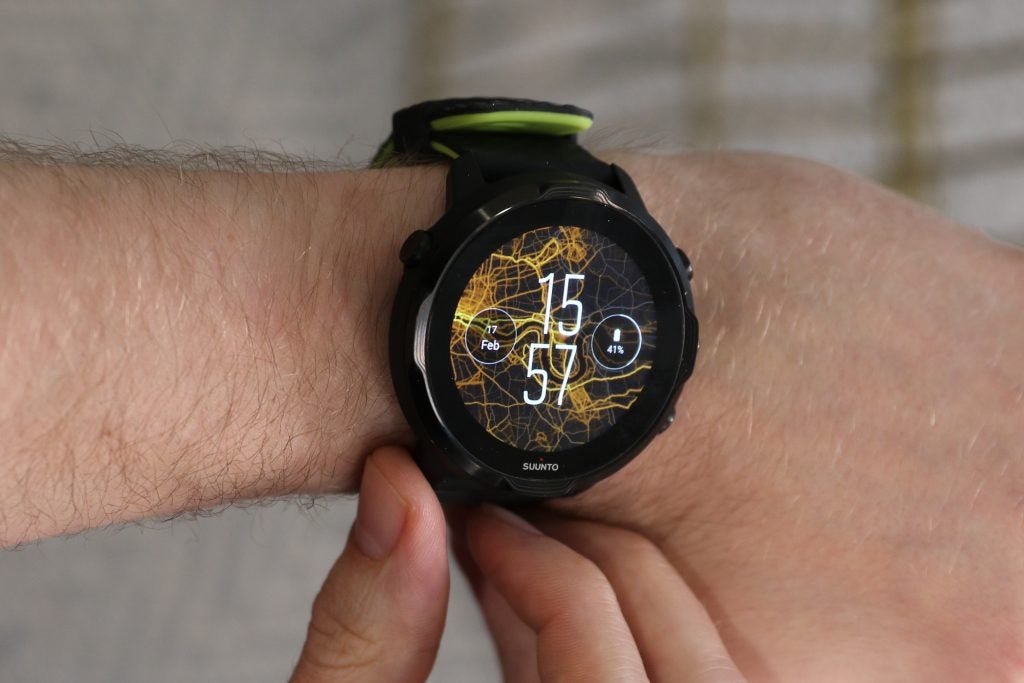 While the tracking is awesome, the Suunto 7’s use of WearOS is a mixed bag. Starting with the positives, the use of WearOS means the Suunto 7 has a much more robust set of smartwatch features than its Garmin rivals.

Out of the box you get support for Google Pay – which is compatible with more banks than Garmin pay – and the Play Store library of apps. It also brings with it a streamlined, significantly more intuitive notifications system that makes Garmin’s look a little clunky.

But, WearOS is still very buggy and is full of bizarre UX and functionality issues. Local music playback is a good example. On paper, the Suunto 7 supports local music playback – but thanks to WearOS, getting music onto the device is a frustrating experience. Unlike Garmin trackers, which let you drag and drop music files, the Suunto requires you to have a music app with local playback support.

This shouldn’t be a big issue, as Play Music has local playback support, but going into the app you’ll have to manually cache tracks from the library using the watch. The UI doesn’t have a search function, which means you’ll have to spend ages scrolling to find the tracks and albums you want to save. I also found, for reasons I can’t explain, the app didn’t feature every album I have in my Play library.

Making matters worse, the OS brings a few serious performance issues. On more than one occasion the Suunto inexplicably froze and wouldn’t whir back into life without a hard reset. The issue was particularly annoying when it occurred mid-run, leaving me without music or a route to follow. Considering its price, I really don’t expect to be experiencing these problems.

Should you buy the Suunto 7?

If you’re after a device that can work equally well as a smartwatch and full-fat fitness tracker then the Suunto 7 is one of your only options, outside of the Apple Watch. It features a solid, near indestructible design, robust application library, support for Google Pay and a great portfolio of fitness tracking services.

The use of Google’s WearOS is a double edged-sword that brings with it a wealth of bug and performance issues that hamper the Suunto’s overall appeal. This, plus its hefty upfront price and distinctly smartwatch battery life, means that very serious athletes will be better off investing in a top end, dedicated tracker.