Sushi Striker: The Way of Sushido is proof that not everything is better on Nintendo Switch. Ever since launching, the hybrid console has become a point of conversation with every new title under the sun. More accurately, players are quick to ask when the biggest blockbusters will be ported to the system. The likes of DOOM, Fortnite, and Skyrim have faired spectacularly, while this tongue-in-cheek puzzler fails to shake off its 3DS origins.

Visual blemishes aside, Nintendo has still managed to craft a competent puzzler with plenty of depth and charm – although it probably isn’t worth the £40 price tag it currently boasts. 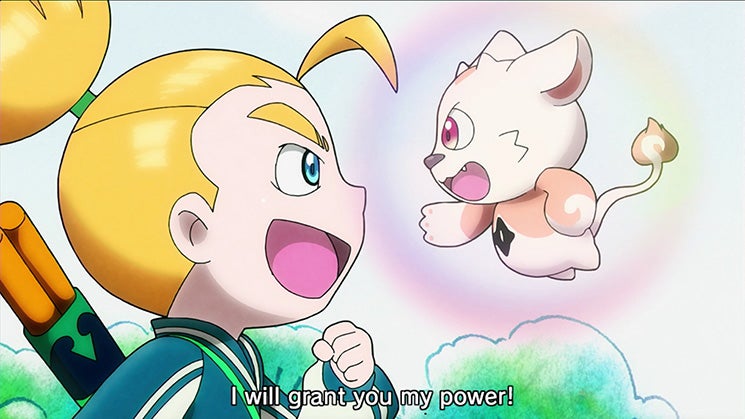 Developed by the team that brought us NES Remix and Theatrhythm: Final Fantasy, Sushi Strikers: The Way of Sushido is a fairly simple action-puzzler. In it, you play as Musashi – a boy/girl in a world where sushi is outlawed by the tyrannical Empire. Its surprisingly lengthy narrative follows our hero and a few select allies as you seek to overthrow this irrational ban. The whole idea is unbelievably silly and unabashedly self-aware of that fact.

It feels like a Saturday morning cartoon, both in terms of tone and pacing. You’re constantly stumbling into new villains or potential allies as you engage in humorous conversation – before inevitably flinging seafood at one another. A sharp localisation makes the majority of encounters feel fun and natural, although I’d have loved an option to use the original Japanese audio over the mediocre English dub. To me, it was needlessly distracting as characters shriek and scream instead of providing fully voiced cut-scenes.

Presentation issues don’t end there, either. Character illustrations feel lacking in detail on the Switch, while docked and in portable mode. This reveals clumsily executed line art that makes this feel like a fan project as opposed to an official Nintendo product. It’s inconsistent, worsened by a user interface that feels unnaturally blown up on the Switch, largely because it’s a port of a project initially intended for 3DS. I can’t help but feel Sushi Strikers is far superior of the ageing handheld.

It’s a relief to say that none of these problems have an impact on gameplay itself, as you’ll be concentrating on executing precise moves to best opponents before they conquer you. At its heart, Sushi Striker remains a competently entertaining puzzler with plenty of charm. 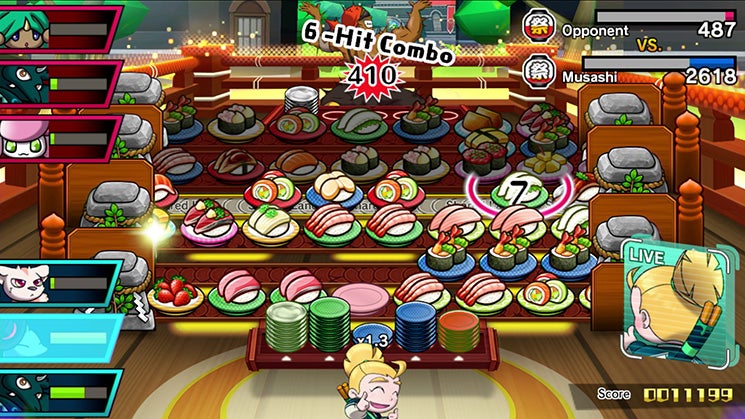 The bulk of Sushi Strikers: Way of Sushido consists of one-on-one battles with AI opponents, as you launch a variety of sushi across the screen from rapidly changing conveyor belts. In order to pull off attacks, you’ll need to link up plates of matching colours using either the thumbstick or touchscreen. I found the latter method more intuitive, making it easier to connect hard-to-reach plates without the frustration of inaccuracy.

After compiling huge piles of plates, you’ll fire them toward your enemy. The higher the combo, the more significant damage you’ll deal. Early encounters are trivial as you learn mechanics, but Sushi Strikers quickly turns up the difficulty with devious opponents outfitted with specific barriers you’ll need to overcome.

For example, some won’t take any damage unless you hurl a specific number of plates at them. Such circumstances help enhance a fairly simplistic gameplay formula, too. Obstacles grow in sophistication as you progress, so prepare yourself for some truly devious challenges. However, if you’re willing to revisit previous stages in exchange for experience and new items, penetrating the more difficult stages isn’t too much of an undertaking. 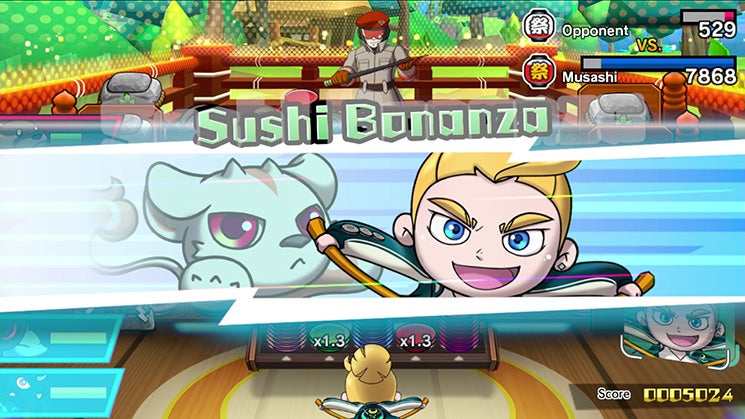 It isn’t all about flinging sushi around, though. You’re also in possession of Sushi Sprites, mythical creatures that feel like a mixture of Pokémon and Pop Vinyl figurines. They’re absurdly cute and in possession of abilities you can activate in the midst of battle. Of course, they come in the form of adorable little things who are found throughout the story or can be earned by performing well in certain stages.

One might fill the screen with desserts you can gorge on to increase your health, while another will imbue you with a shield to deflect the next couple of hits. Three can be equipped at once, so you’re expected to curate loadouts to combat the strengths and weaknesses of each opponent. You’ll level them up individually, too, with the favourite dishes of each sprite increasing in power alongside stats. It’s a wonderful loop that always rewards the player, even if easier matches grow repetitive over time.

Items will be collected across Sushi Striker, which act as modifiers or sorts. You can slow down the speed of conveyor belts for easier combinations or half overall health to make things extra difficult. None of these alter the basic flow of gameplay in a drastic manner, but having the option to curate things to your liking is a neat addition.

Sushi Striker: Way of Sushido is an enjoyable puzzle adventure with an excess of charm behind its silly characters and lovable premise. However, its lacklustre presentation and 3DS origins mean the overall package suffers on Nintendo Switch. It simply doesn’t look very good, which is detrimental for a puzzler so reliant on its outlandish world.

The £40 price tag is also a hard pill to swallow, considering Sushi Striker feels similar to arcade puzzlers previously exclusive to eShop in the past. There’s plenty of depth here, but the act of completing matches and progressing through the story never really changes.