Awkward and frustrating controls are normally something we’d bemoan in a game. A game can have the best graphics in the world but poor controls can ruin the experience.

What can we make, then, of a game that celebrates awkward controls?

Bossa Studios’ Surgeon Simulator for the PC is an epic example. It marries addictiveness with a realistic physics engine and the kind of gameplay that frustrates and rewards in equal measure. Think QWOP with blood. Lots of blood. 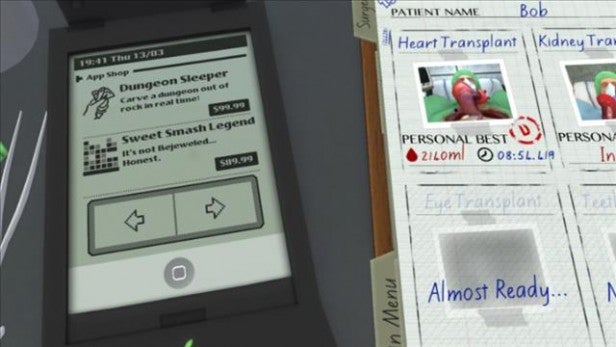 You start life in front of your desk, a tablet at the ready to show you the controls, give you tips on how to conduct operations and a clipboard with a selection of operations to conduct ranging from heart transplant to replacing some teeth. You get a feel of the tongue in cheek humour you can expect from Surgeon Simulator Touch even here. The tablet is called the iZac and is replete with its very own playable version of Flappy Bird, while the desk is littered with items and gags including an empty bottle of diazepam.

Surgeon Simulator Touch, as the name suggests, has been adapted for the touch screen of the iPad. Some of the finesse of having two hands each with five individually movable fingers has been lost on the iPad version, but the awkwardness of the controls stay true to the original. Multi-touch is used well and you will end up occasionally looking like you’re playing Twister with your fingers.

To say that Surgeon Simulator Touch throws you in at the deep end is an understatement. Your first operation is a heart transplant and you will kill your patient, Bob – guaranteed. In fact you’ll probably brutally murder Bob quite a few times, sometimes just for the heck of it. There is an odd sense of power you wield over your patient as he sleeps. You can move his head left and right and his life really does rest in your invisible hands. 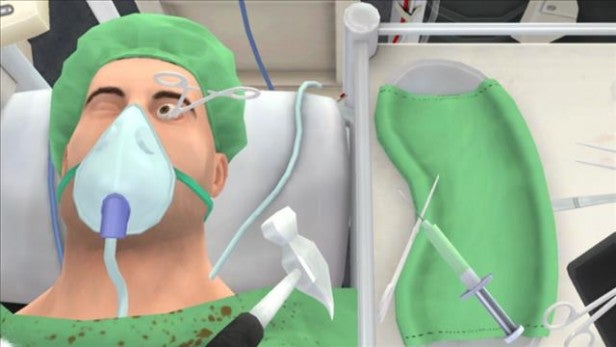 Operations play out as if they are being conducted by Laurel and Hardy. Pick up a hammer and it will swing maniacally, as likely to smack Bob square in the face as it is to crack open a ribcage. It takes a great deal of self-control and patience to control tools with as much finesse as possible but getting it right can be extremely satisfying.

Get it wrong, and you regularly will, your patient will begin to bleed out and his heart rate will begin to rise. Bob’s death can come in a few guises. Bleeding out is the most likely but you also need to keep an eye out on his heart. Too high a heart-rate and he’ll suffer a heart attack and die, too low and it just stops altogether. Game over.

There are no hints but if you look around the surgery you’ll see knobs, buttons, defibrillators and a couple of syringes. Some stem bleeding, others reduce the heart rate to manageable levels. All will need to be discovered and used to complete a transplant successfully.

The voyage of discovery leads to a real sense of accomplishment and what you once thought was an impossible surgery becomes simple once you understand the right tools to use. 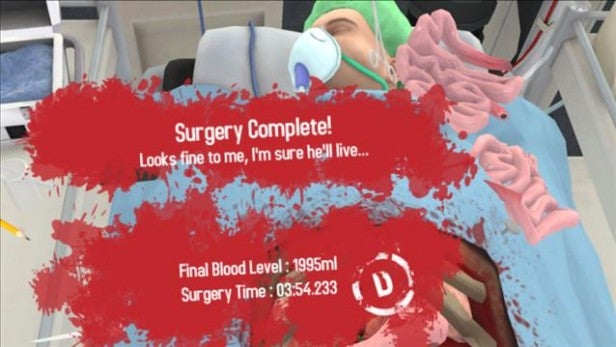 At £3.99 Surgeon Simulator Touch sounds a little pricey for an app but you’re getting a polished game unlike anything else you’ve ever played and, joy of joys, there are no in-app purchases.

You will laugh and you will feel vaguely nauseas but you’ll also feel damn good when you complete an operation with slick professionalism and save your man. Become good enough and new game modes open up. Trying to conduct a kidney transplant on a moving trolley adds a whole new dimension of frenzy.

Aside from the normal game mode, there’s also recorder which lets you record and post videos of your operations and multiplayer which matches you up with other players in a race to who can finish and operation quickest. Unfortunately we couldn’t find anyone to play against before writing the review, perhaps because the game is so new.

If blood makes you squeamish and faint then stick to Angry Birds. Surgeon Simulator Touch combines unique game mechanics, which some will find annoying, with dark humour and it does so with success. Frustrating, annoying and charming in equal measure we can’t help but recommend a game which is almost as fun when you lose as when you win.