My nerves are calm and my hand is steady. Bob lays there unconscious, unaware of what’s about to happen. Something is wrong with his heart and it’s up to me, super-surgeon extraordinaire, to save his life. I take a deep breath and use a hammer to smash open his rib cage. Turns out, I’m a terrible surgeon.

Already out on a multitude of formats, Bossa Studios brings its 48-hour Global Game Jam construction to the Switch in the form of Surgeon Simulator CPR (Co-Op Play Ready).

For the uninitiated, Surgeon Simulator is exactly what you think it is. Well, kind of. You put yourself in the role of the surgeon and are tasked with performing various operations to save patients (normally Bob). This isn’t, however, a serious romp. No, Surgeon Simulator was designed to be funny, frustrating and fiddly. You pilot the surgeon’s hand as it glides around the table trying to find the best tools for the job. 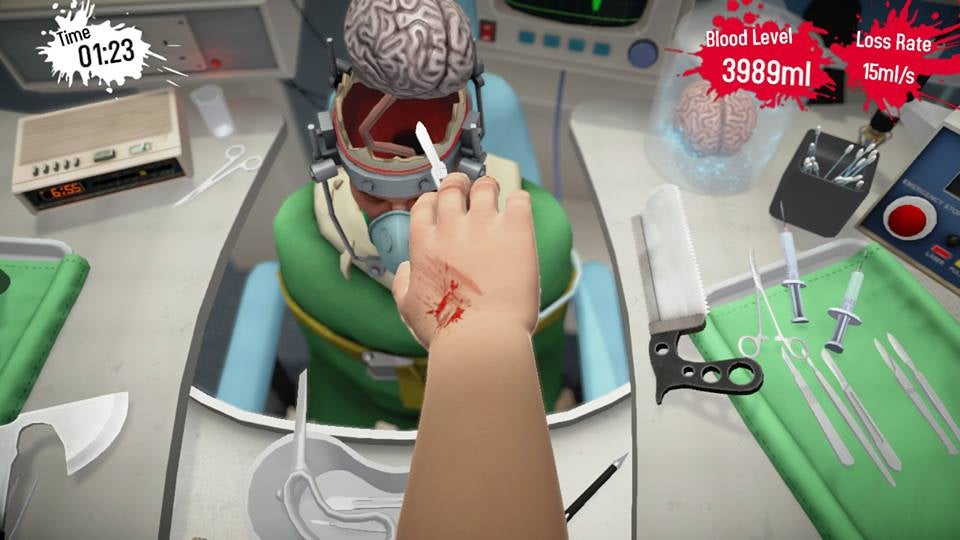 In the first case, it’s a heart transplant. Now, I’m no doctor, but I’m pretty sure you shouldn’t make a mess of your patient. In this game, however, it’s encouraged; you’re not meant to worry about how badly you’ve messed up their insides. So yes, literally take a hammer and crush their rib cage into tiny pieces in order to get to the juicy insides. You’d be forgiven for thinking there was some delicate procedure for getting to the heart – but no, you simply shove in your hand, grab the lungs and pull them out. Yep, just yank ‘em out and throw them somewhere. Anywhere you like.

Now, I’m sat there thinking ‘Is Bob going to live?’, but the game allows me to continue, suggesting I must be doing something right. I grab a scalpel (in the most cack-handed way possible) and start cutting around the heart and oesophagus. Everything starts rag-dolling, flying off in different directions, so I’m sure I’ve done something right. At this point, Bob has no innards. Everything has gone. I grab the new heart and drop it in. “Surgery Complete”. A message pops up saying, “Looks fine to me, I’m sure he’ll live”.

As you can see, this game was designed with comedy in mind – and, at this point, I knew where I stood. However, to get that far took me the best part of an hour, and that’s mainly a result of the controls. Difficult by design, controlling the surgeon’s hands feel like I’ve just sunk two glasses of the strong stuff. It’s incredibly difficult and takes some getting used to.

Even then, you never really have precise control. The Switch version brings motion controls into the mix, which you’d think would make the whole ordeal easier. Within 10 minutes, however, I’d turned them off and opted to use the regular controls instead. 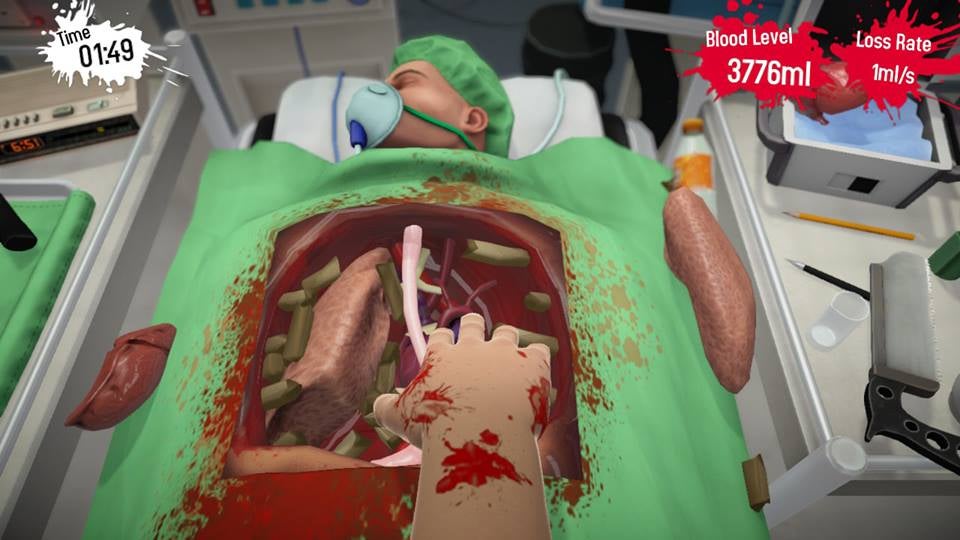 Frustration is the name of the game. With a couple of friends, there are laughs to be had, but on your own trying to complete some of the levels can be infuriating. The kidney transplant almost broke me, as I spent two whole hours trying to remove some intestines to get to the kidneys, only to find that once there and cut around, I couldn’t actually pick them up.

Two hours and I was almost in tears. I moved away, came back to it with a clear head – but I was mentally drained. Games with bad mechanics and buggy physics can create some hilarious moments, but when you’re unable to complete something that should only take you two minutes, you start to question whether it’s you. I’d like to think my 27 years as a gamer means I have some level of skill, but this game managed to reduce me to a newbie in mere hours.

After finally completing it, I felt like I’d actually graduated from uni and was ready to be the next Doogie Howser. I was able to move on and perform brain surgery in a mere minute and a half. I felt like a genius. With those procedures, the eye transplant and the teeth replacement op, I felt like I was ready for the big leagues. 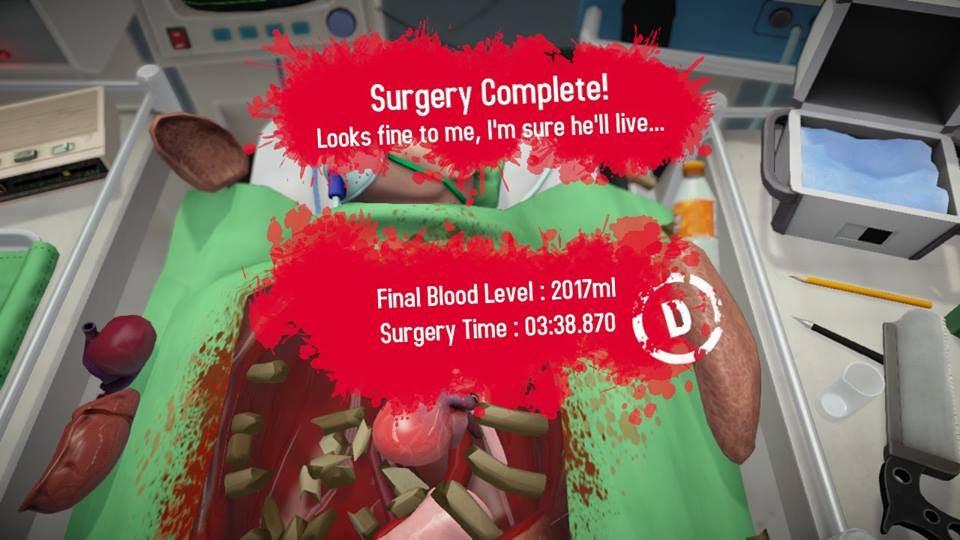 Unfortunately, the five operations are all that’s on offer. Although you can perform them again but in different places. The difficulty is upped by the patient being on a moving gurney and then in an actual moving ambulance, with the back doors flying open and your equipment all over the shop. This makes some operation attempts nearly impossible.

Your patience (and sanity) are later rewarded with the fun space levels, but by the time you get there, you might be a little bored. And the fact that you have to complete each operation in sequence before you’re able to try the different variations isn’t great. It would have been better to open up all the options once the initial surgery is complete, giving freedom from the get-go.

Like I said before, this can be fun with friends. And in CPR, you have the option of giving a Joy-Con to a mate and letting them control the second hand. The major setback here is you have to use the motion controls, which are definitely the worst part of the experience. I’d much prefer sitting there watching my friend, laughing at them while they attempt to crack open Bob’s skull without killing him.

Obviously, Surgeon Simulator isn’t meant to be taken seriously, and as long as you can keep that in the forefront of your mind, there’s some fun to be had here. I should imagine it would make for some great streaming material and a few comical sessions with friends.

Beyond that, however, the game is light on content and the added Switch features don’t add anything worth the price of entry. A recommendation is difficult: Surgeon Simulator isn’t bad, but it isn’t good either. Then again, that’s how it was designed. Cheap laughs for a cheap price.

Thankfully, If you fancy giving it a go, it won’t cost you your left kidney. It’s the equivalent of renting a terrible movie to watch with others on a Saturday night. Funny for a moment, but with a danger of flat-lining very quickly.