The Surface Studio 2 is an expensive luxury, but a wealth of custom features and top end screen justify the up front cost. The only serious downside is its use of an old Intel CPU. We’d like to see an AMD Ryzen or more powerful Intel option appear on the third generation Surface Studio.

Microsoft’s Surface Studio 2 is one of the most interesting all-in-one PCs on the market. The second-generation hybrid all-in-one graphics tablet aims to take on the big-name players in the design and creative PC market, including the Wacom Cintiq Pro and also high-profile all-in-ones like the new Apple iMac 2019.

The Surface Studio 2 offers a number of custom features that, in many ways, make it better than both of the models above. Make no mistake, if you have the money then you’ll struggle to find a better all-in-one than the Surface Studio 2 for design, engineering, digital painting, video editing and general creative work. 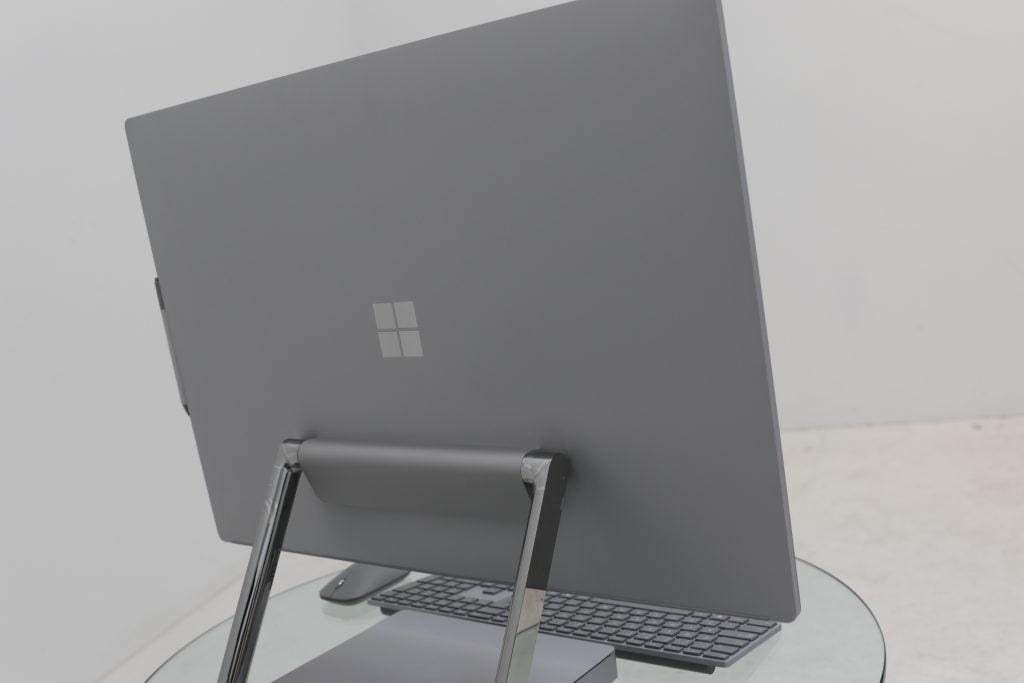 The, er, standout feature of the Surface Studio 2 is arguably its flexible, posable stand, which lets you turn this all-in-one PC into a digital drawing board.

The Surface Studio 2 is a creative’s dream

When I say the Surface Studio 2 is an artist’s dream, I mean it. This is largely because it features the same amazing hinge mechanism showcased on the original Surface Studio.

The custom hinge mechanism allows you to turn the 28-inch screen into a giant tablet and draw directly onto it, as you would on a Cintiq. However, what makes it next-level good is that out of the box it lets you set it at any angle you like, including the 20-degree easel setup of artists. Although the Cintiq Pro offers the easel/drawing board angle out of the box, unless you invest in the optional Ergo stand, you can’t easily adjust its angle, or set it up to sit like a regular PC.

The Surface Studio 2’s build quality is excellent, and the clever hinge is wonderfully smooth in use. I can’t even begin to describe how great the experience of sketching onto the screen. This is largely due to the Studio 2’s atypical 3:2 aspect ratio, which makes the display feel super-roomy and makes it easy to have two windows/apps open side by side. This was particularly useful whilst sketching, since I was able to have the reference material open in a web page next to my sketch in Illustrator.

The Surface Pen isn’t as nice as the one seen on the Cintiq, which employs Wacom rather than Microsoft-owned N-trig active stylus tech, but it’s more than good enough. The support for 4096 pressure points and 12-gram activation force ensure it’s sensitive enough for pencil sketching and inking. The re-mappable side button also makes it easy to customise inputs to match your specific style or habits. 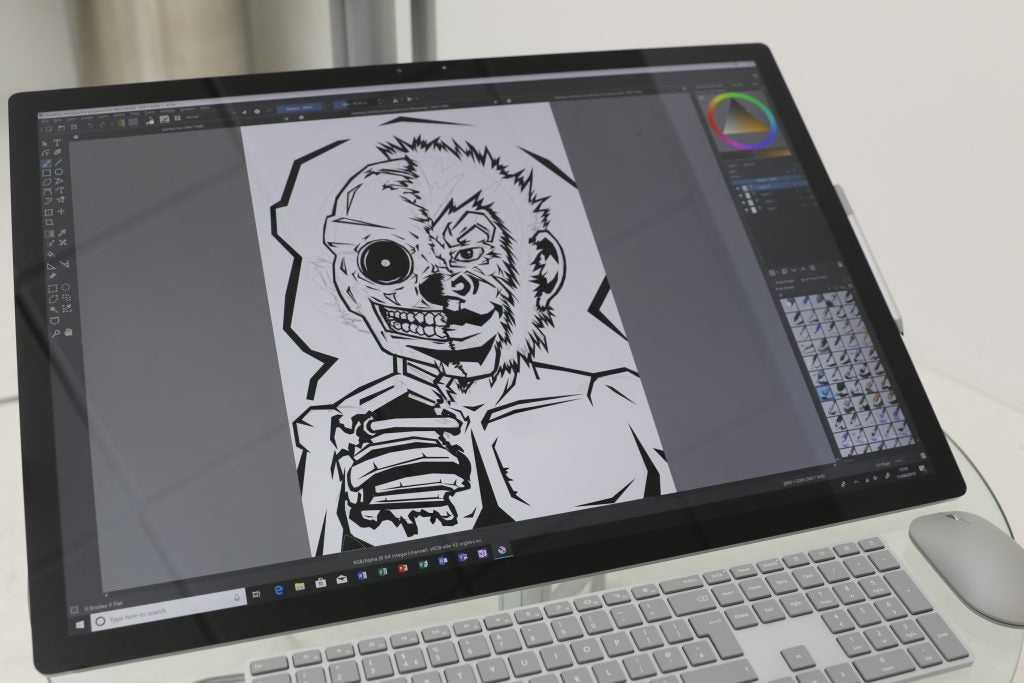 All hail the M-800 Monkey Terminator. We were pleased to see that freeware drawing program Krita worked a treat out of the box on the Surface Studio 2.

Coupled with the optional £99 Surface Dial, which lets you scroll through layers in Photoshop or adjust brush sizes on the fly, the Studio offers one of the most intuitive drawing experiences available. Although, I know that numerous creatives still prefer to use keyboard shortcuts purely out of habit, so the Dial is hardly a must-have. In addition, it’s easy to use the shortcuts since the Studio 2 comes with the Surface keyboard and mouse in the box. As such, I’d recommend going to a store and trying out the Surface Dial before you buy.

The only issue experienced is the fact that the pre-installed nib doesn’t offer enough resistance when sketching. The Cintiq mimics the feel of drawing on paper much better out of the box. Thankfully, you can easily fix this by investing in Microsoft’s Surface Pen nib collection.

So far, so good; but you may be thinking didn’t the original Surface Studio do all of the above? And you’d be right. However, a number of small but important improvements to the screen and hardware make the Surface Studio 2 feel like a decent enough step forward.

The 4500 x 3000 pixel resolution is the same as the last model of Studio, and remains more than sharp enough for creative work. What sets it apart is that it has a maximum brightness over 500 nits. Cracking out our colorimeter, the screen peaked at around 540 nits.

Although not HDR TV-level bright – HDR10 TVs are expected to have a peak brightness of 1000 nits – it’s still excellent and gives the Studio 2 a significantly better contrast ratio than competing products such as the Cintiq Pro. In non-techie terms, the improved brightness results in a screen that’s significantly more immersive and vibrant than you’d find on most creative PCs.

The Studio 2’s display also performs well when it comes to screen temperature and gamut coverage: two areas that are of importance to creatives as they inform on the accuracy of on-screen colours. For the most part, the Surface Studio’s screen is more than accurate enough for artists that work in physical media. The only bizarre omission is that the Studio 2 doesn’t have a screen mode targeting the old, but still popular, Adobe RGB gamut. Instead, it has basic Vivid, sRGB and DCI-P3 options.

This will only be a serious issue for artists and photographers that continue to work and print using the Adobe RGB gamut. 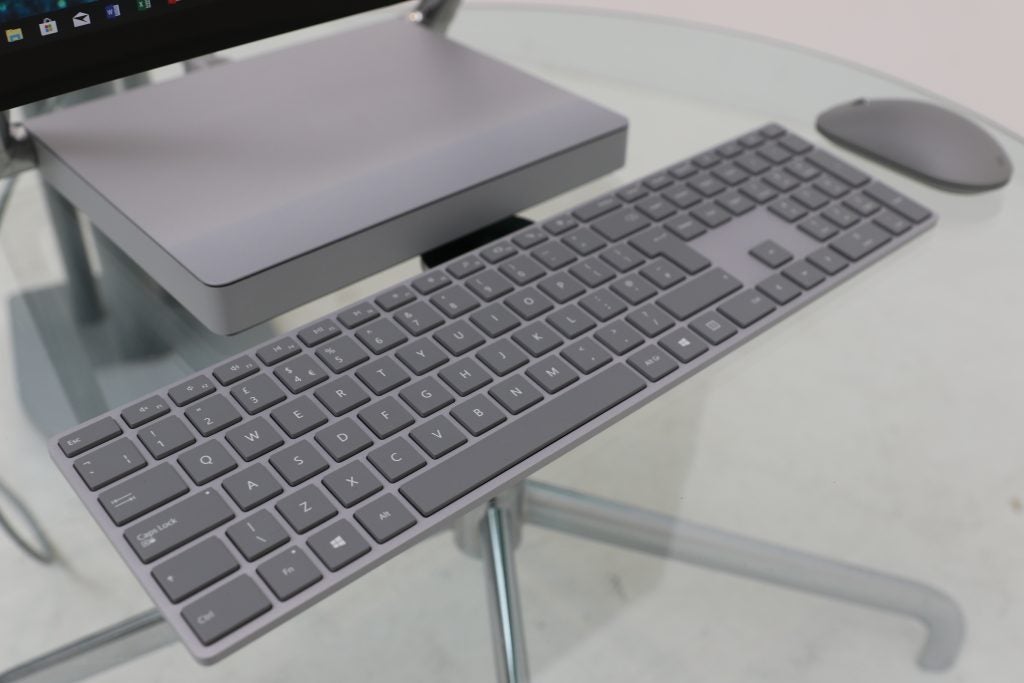 Choose your weapon, keyboard, mouse, touchscreen, Pen, Dial, or any combination of the above.

The Surface Studio 2’s hardware blitzes through most tasks, but it’s getting old

The display isn’t the only part of the Surface Studio’s hardware to receive an upgrade. For starters, Microsoft has dropped the original’s i5 CPU option and raised the minimum RAM to 16GB. This is a big deal; the i5 with 8GB of RAM combo seen on the first-gen Studio wasn’t powerful enough for CPU-heavy creative workloads.

This means every version of the Surface Studio will come with a 7th-generation quad-core Intel i7 CPU. From there you can have either 16 or 32GB of RAM and 1 or 2TB of SSD storage. GPU options are limited to previous-generation Nvidia GeForce GTX 1060 and GTX 1070 GPU options.

These specs aren’t to be sniffed at, however. During testing I found that the top-specced Studio 2 reviewed can handle intensive 3D modelling, video editing and large-scale digital painting projects. It also easily ran triple-A games, such as Shadow of the Tomb Raider in 1080p with their graphics settings maxed at playable frame rates. 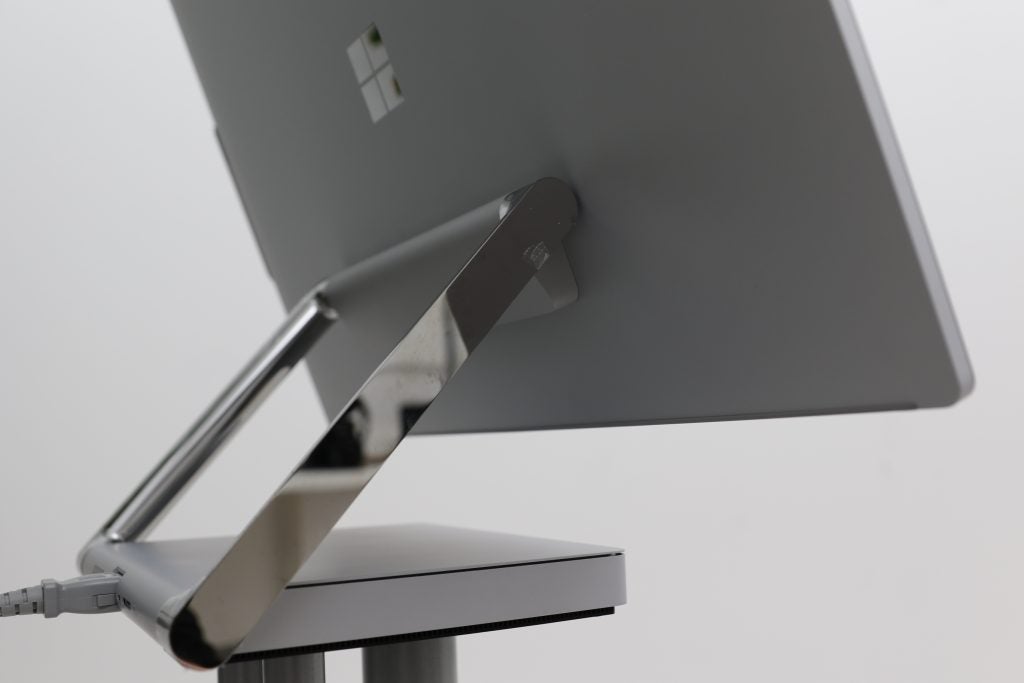 All of the ports are found ’round the back, with four Type-A USBs and a Type-C and a SD reader sitting astride the power supply socket.

This is great, but the issue is that the hardware is still far from cutting-edge. At this price I’d expect top-of-the-tree components – and the Surface Studio 2 doesn’t offer them. The CPU is two generations old, plus the 10 Series GTX line has since been superseded by Nvidia’s latest generation 20 Series RTX cards.

The absence of RTX cards aren’t a huge deal since the custom shading and performance technologies they use are pretty much exclusively gamer-focused, but I’d welcome a more robust set of CPU options. Ryzen CPUs offer better multi-core performance, which is more important for most creative processes. As such, I’d love to see a Ryzen option for the Studio – although being fair, this would require much work on Microsoft’s part.

Thankfully, the other issues I have with the Surface Studio 2 are fairly minor. The most significant of these is the fact that it doesn’t have any Thunderbolt ports. Around the back you’ll find USB-A, USB-C, Ethernet and SD inputs. Considering the Studio’s creative focus, where you’ll regularly be transferring large files, the lack of Thunderbolt connectivity feels like a bizarre omission that so easily could have been avoided. 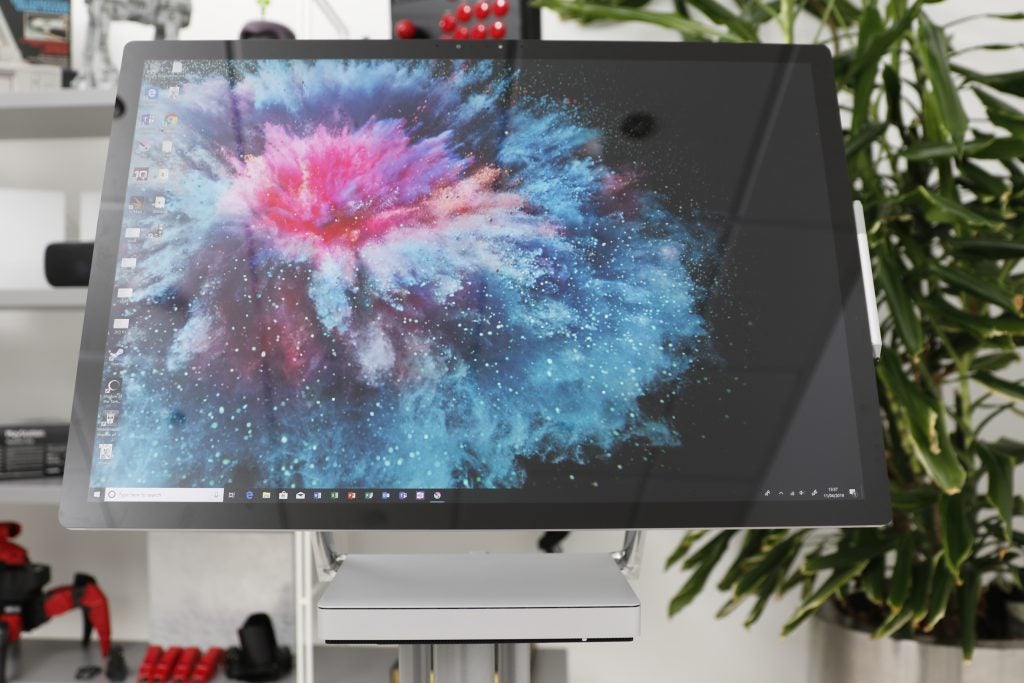 Measuring 12.5mm at the edges, the Surface Studio 2 is thinner than some laptops.

Should I buy the Surface Studio 2?

There’s no getting round the fact that the Surface Studio 2 is super-expensive – but the fact remains, there’s nothing else like it on the market. The nifty, alluring design lets you quickly and easily turn the Windows-flavoured iMac-rival into a fully functioning tablet PC that matches and in some areas beats its more established Wacom competition.

The only downside is that, despite the spruce up that Microsoft has given it, the Studio 2 still uses fairly old hardware. The use of a 7th-gen Intel i7 laptop CPU is particularly irritating. I hope that Microsoft will offer a more diverse set of CPU options that do justice to its amazing design and display for its third-generation Studio. If you’re listening, I’d also like a Thunderbolt port, Microsoft.

The Surface Studio 2 is the ultimate all-in-one PC for creatives, but it falls slightly short of perfection.