With the Surface Pro X, Microsoft has created a forward-thinking device that’s ahead of its time – but this isn't a good thing. While the Microsoft SQ1 ARM processor enables slightly improved battery life and facilitates the slimmer design, the device is hamstrung by consequential performance and compatibility issues. The Surface Pro X may well be what the future looks like for Surface devices and 2-in-1s across the board, but we're some way off right now.

What is the Surface Pro X?

The Surface Pro X is an example of Microsoft looking to the future, with the design taking centre-stage. The form factor of the past few generations of Surface Pro device has been honed and made more stylish for this forward-thinking model.

But to achieve the new design, Microsoft has had to look to Qualcomm and the ARM processor architecture. Ultimately, this is the defining feature for the Surface Pro X, putting it in an awkward middle ground where it’s not powerful enough to compete with laptops, yet lacks the user-friendly touchscreen interface of a tablet.

The Surface Pro X looks like the next-generation of Surface Pro. It’s reasonable to expect the mainline Surface Pro devices will get closer to this design as the technology catches up and laptops become thinner.

Notable changes include a slimming down of the Surface Pro, a trimming of its bezels, rounding off its corners, and a brighter display. On looks alone, this is a glorious and aspirational device. 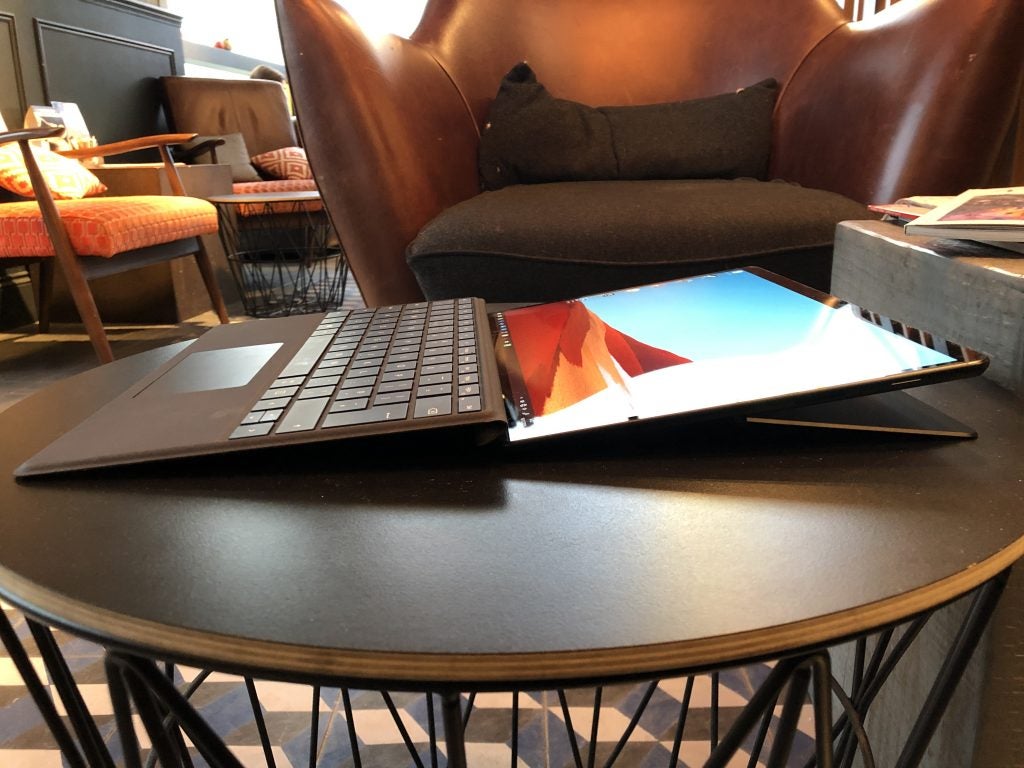 As with the rest of the Surface Pro line, the X offers fantastic portability. The device is similar in terms of weight to the Surface Pro 7 , but the thinner body makes this model easier to lug around than its predecessors.

However, the body of the Surface Pro X is a fingerprint magnet, and considering it’s currently only available in Black, there isn’t any way to avoid them. Grubby marks quickly detract from an otherwise gorgeous portable.

In terms of ports, the Surface Pro X offers the simple combo of two USB-C ports and the Surface Connect port. The lack of USB-A or any form of SD card input mean dongles galore for many users.

Related: Find the best student laptop for you

No Type Cover or stylus combos come included in the price, so you’ll have to shell out separately for these – despite the fact I can’t imagine using this device without these accessories.

The Surface Pro X Signature Keyboard with Slim Pen Bundle costs £259.99, while the stylus-less Surface Pro X Keyboard costs £129.99. The Slim Pen is available separately for £129.99. If the base price of £999 was already intimidating, then this news could justifiably be a deal breaker. 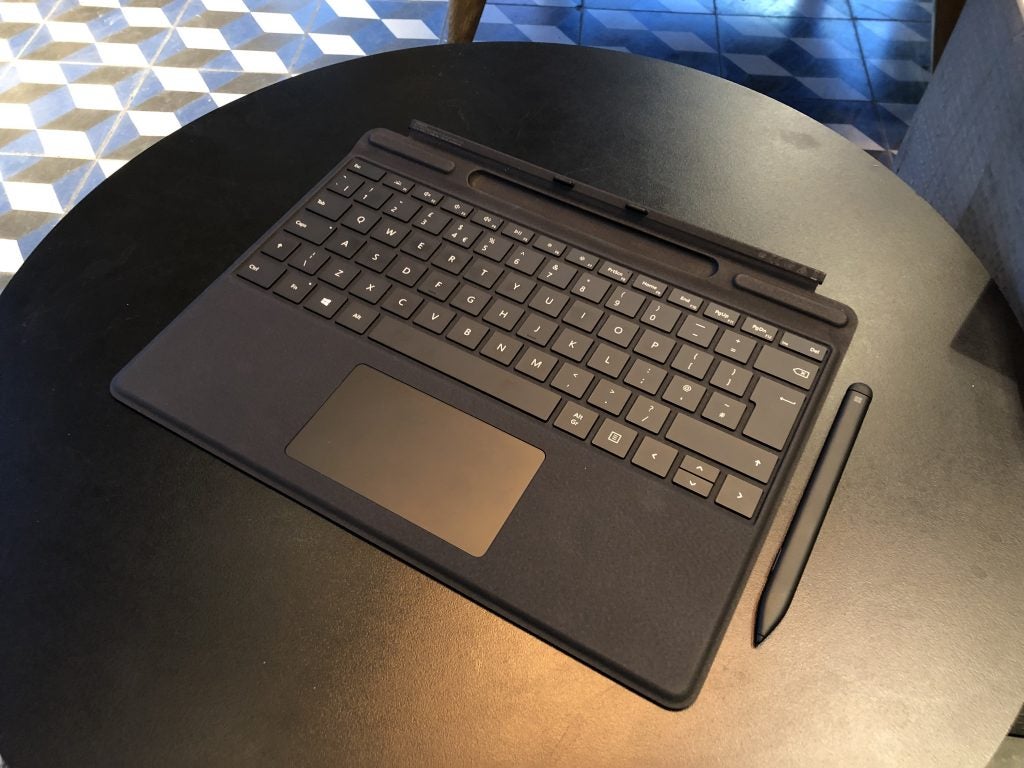 The key presses feel similar to the stellar performance of past Surface Type Covers with surprisingly good travel, but the new keyboard includes a slot for the new Surface Slim Pen. This may not sound like a problem, but it is.

The slot raises the keyboard further up and this leads to a lot of flex and bounce when typing. It is possible to forget about it when you’re in the flow of typing, but it can definitely be an unwelcome distraction.

The PixelSense displays that feature on Surface devices are stunning – and the Surface Pro X follows this trend. 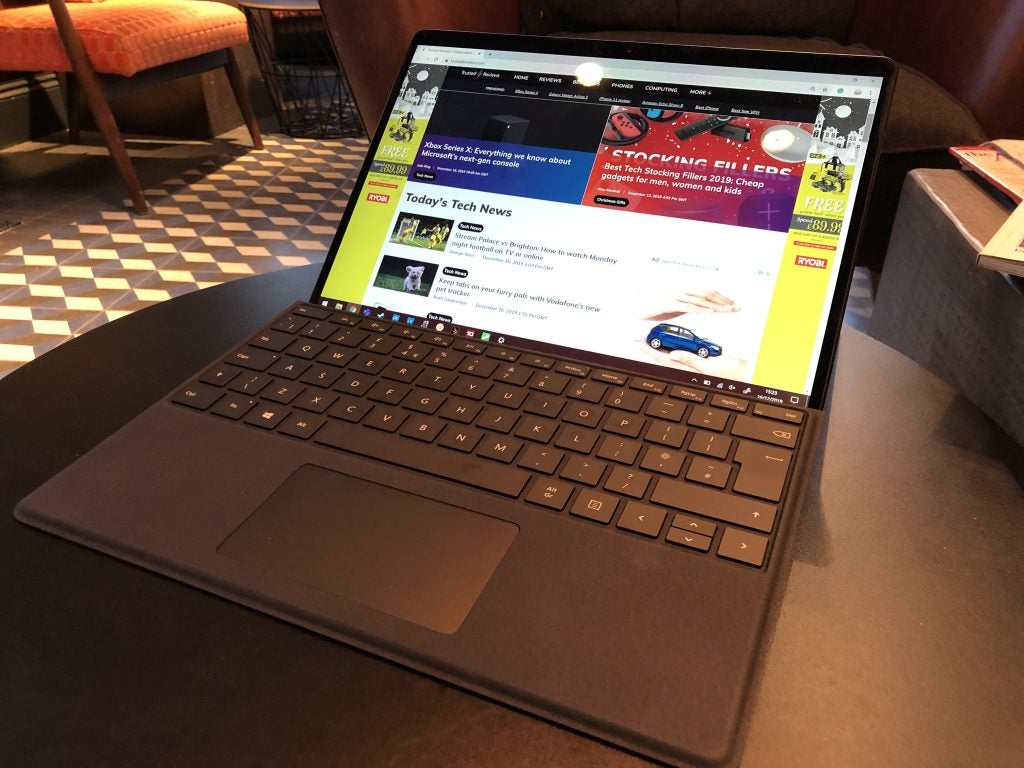 Unfortunately, we weren’t able to run our normal display benchmark tests on this ARM-based machine as the adaptive brightness feature refused to be deactivated, causing the device to dim its display at unwanted times. I’ve alerted Microsoft to this issue, and will likely be calling in another review unit to get the final readings.

The display appears to share a lot in common with that of the Surface Pro 7 though, so it’s unlikely that you’ll be disappointed with the quality. Colours did appear a little less sharp than they do on other Surface devices, but Microsoft has set a lofty bar for picture quality – the Pro X is still easily a superb option for watching Netflix.

Related: The best gaming laptops for playing on the go

Surface Pro X performance – An ARM and a lag

The Surface Pro X lives and dies by the on-board Microsoft SQ1 chip. Microsoft turned away from Intel for this device, and looked to Qualcomm for an ARM-based processor. The goal was to provide longer battery life, simple LTE support and a sleeker form factor. Microsoft has somewhat achieved this, but at great cost to performance.

Before we get on to overall performance, there’s the issue of compatibility. Some of the apps you use day in and day out on Windows PCs and laptops won’t be the same version you’ll use on this machine. In addition, there are some that just aren’t available for ARM devices since 64-bit apps are not supported. 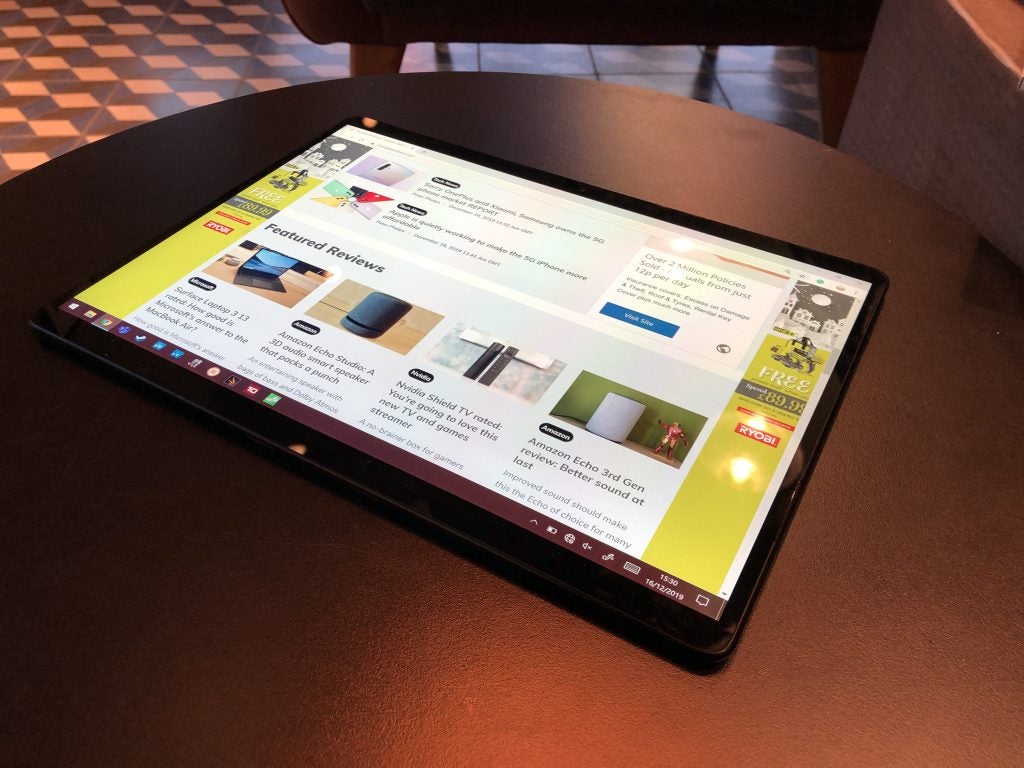 The most notable example of this is Google Chrome. The version of Chrome you’ll use on this device is an emulated 32-bit version of the regular 64-bit app. What this means for users is notable slow-down. The performance of apps such as Chrome feel a solid step behind what you’ll be used to from devices of the past few years.

These compatibility issues meant I wasn’t able to run several of the benchmark programs we would usually run. However, our Geekbench 5 processor testing did work. For reference, our review unit was the model priced at £1449 (Type Cover and stylus not included), which comes with 16GB of RAM and 256GB of storage.

The Surface Pro 7 saw a significantly better benchmark score, despite being priced similarly and offering lot of what the Pro X tries to achieve – albeit in a thicker body and less impressive battery life.

Microsoft was keen to point out that this is a device for portability and productivity, rather than anything more heavy duty. Therefore, the iPad Pro 2018 seems a direct rival – a tough match up the Pro X definitely loses due to the snappy performance and ease of use of iPadOS.

The ARM device did surprise when it came to gaming. This device is in no way made for someone who wants to play games, especially since certain titles aren’t even supported, but we did manage to get Rocket League running via Steam without issue.

Another benchmark test I was able to run was CrystalDisk, which measures the SSD speeds of a device. With read speeds of 1,974.63 MB/s and write speeds of 756.05MB/s, the Surface Pro X shows a middling performance when saving and loading files on the system.

The Surface Pro X is stated as offering up to 13 hours of typical use – a lofty claim made in light of the battery life-extending benefits of ARM processors.

As with most touted battery life figures, our testing of the battery didn’t quite make it to 13 hours – but it was still impressive. 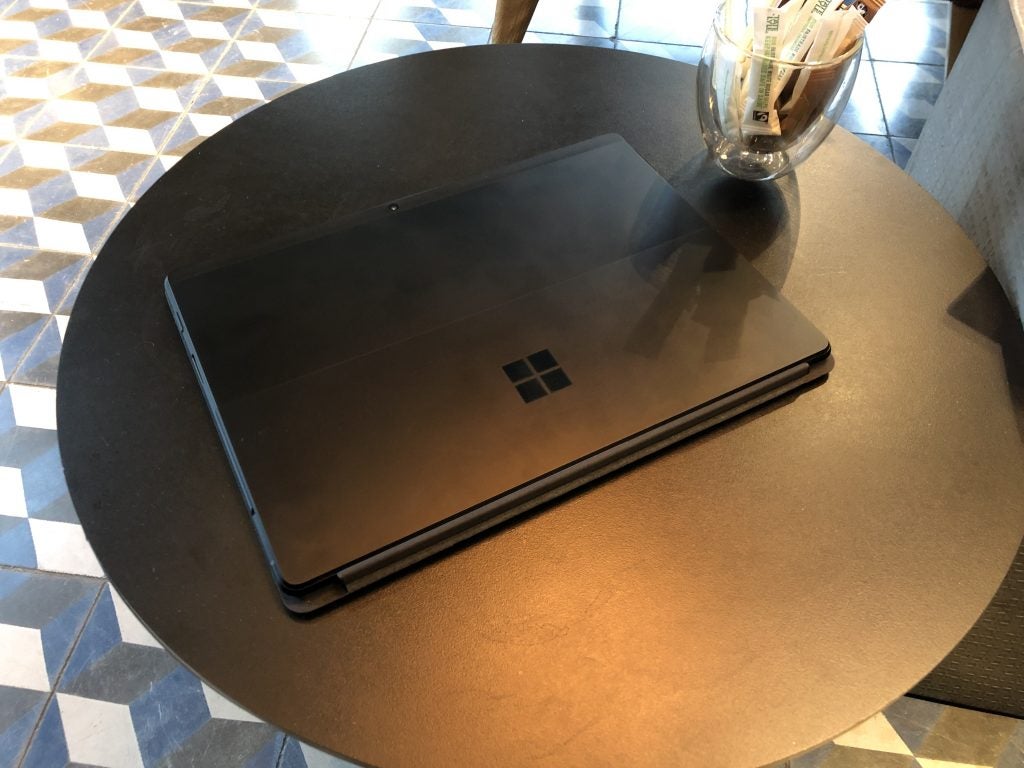 Our testing saw results of between 9-10 hours. Many high-end laptops these days often achieve around 6-8 hours of real-world use, so this initially seems impressive.

However, the Surface Pro 7 – with an Intel i5 processor – managed 8-9 hours. That’s a small difference that really isn’t worth the drop in performance. Meanwhile, our testing of the iPad Pro 2018 also saw that device manage upwards of 10 hours of battery life.

The new Surface Slim Pen feels a lot more like a tool with which to create than the previous Surface Pen. The new version is flatter and sits more naturally in the hand. The original felt like a computer stylus; this feels more akin to a paintbrush.

Other notable features include LTE support via a nano-SIM and a sort-of replaceable SSD. You can access both by popping open a compartment under the kickstand. The SSD is quite an uncommon size, which makes replacing it a bit of a hassle – but it can be done, if you’re so inclined. 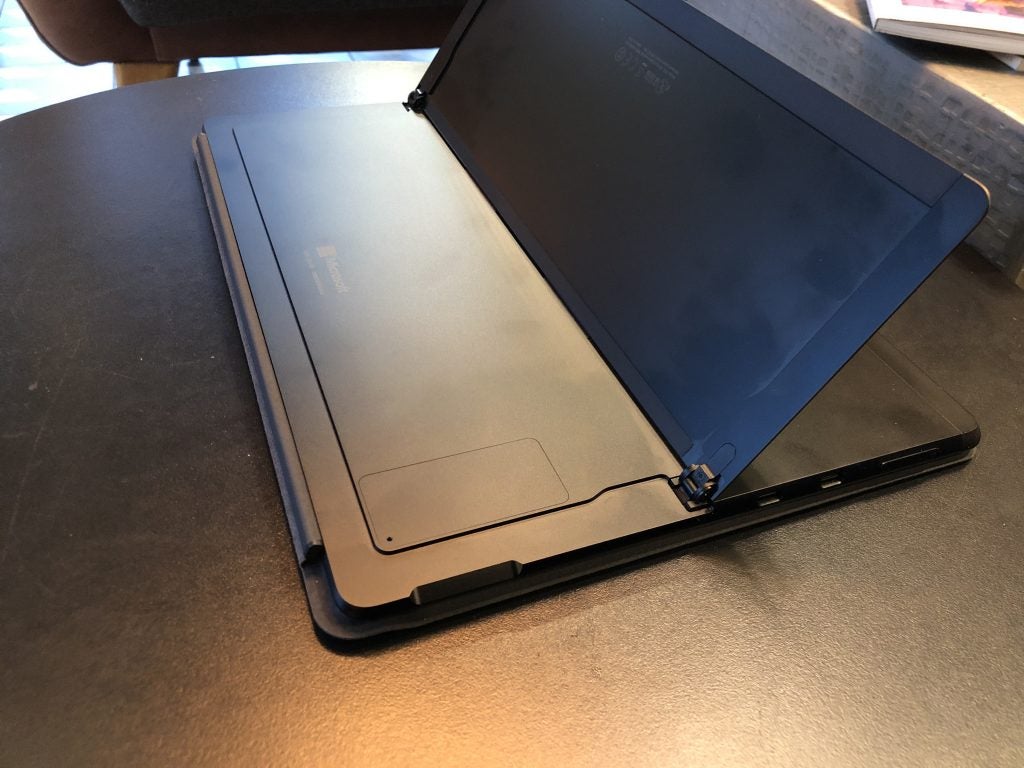 Should you buy the Surface Pro X?

The Surface Pro X is a hard device to recommend. It works as an exciting concept that shows what the future of computing – and more specifically the Surface line –could look like. But right now, it simply isn’t ready.

Compatibility issues with apps and the restrained performance mean most people should spend their money elsewhere. The Surface Pro 7 offers everything you might want from this device in terms of performance, just in a slightly less stylish form factor, while the iPad Pro 2018 flaunts the stylish looks and can comfortably do many of the basic productivity tasks for which you’d use the Surface Pro X.

If you’re a fan of the design, and aren’t concerned that you can get better value for money elsewhere, then you might love this device. But the shine may dull when you become irritated by confusing app compatibility and middling performance.

There’s no faulting Microsoft’s ambition with the Surface Pro X, attempting to launch a device with a brave new design that could excel at both laptop and tablet duties. But with a lacklustre performance, string of app compatibility issues and an interface that really doesn’t favour touch controls, the Surface Pro X spreads itself too thin to compete on either front.