In addition to the the larger, squarer aspect, the Surface Pro 3’s screen is also very sharp. Its larger screen means it isn’t as sharp as an iPad, but the 2,140 x 1,440 resolution equates to 215 pixels per inch (ppi). That compares favourably with the 13-inch MacBook Air (126ppi) and most other laptops in this class. Videos looks sharp, as do photos.

We didn’t have the time with the Surface Pro 3 to run the full gamut of screen tests we normally conduct on laptops, but subjectively it’s clear this is an excellent screen. Blacks have a deep, clear look to them and colours are rich but not oversaturated. As with previous Surface Pro’s it’s also bright. This helps counteract the reflections from the screen when outdoors, though it can’t eliminate them.

There are weaknesses, such as a hint of bleed from the edges when in very dark rooms, but no laptop can match this for the same money.  It makes the MacBook Air’s screen look mediocre in the extreme.

The speakers are a big improvement, too. The front-facing speakers reach decent volumes without distortion. They’re fine for watching TV provided there isn’t too much on-screen action. 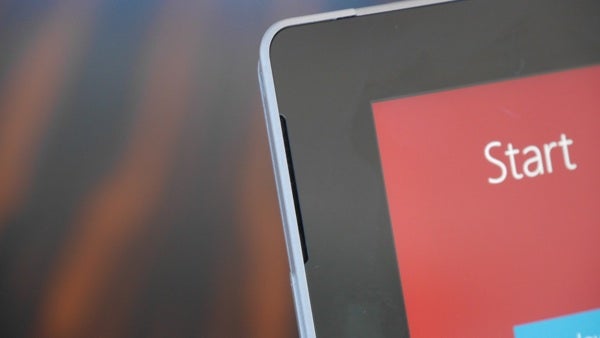 You’ve probably made your mind up about Windows 8 by now. Either you love it, hate it or tolerate it. All we’ll add now is that Surface Pro 3 is the best way to enjoy Windows 8. It plays to its strengths, even if it can’t hide some of the weaknesses. What’s more interesting is how the Surface Pen and OneNote, Microsoft’s Evernote, interact.

It’s a new pen, too. Previous Surface Pro’s used Wacom digitisers, but they had a slight ‘offset’ and poor corner accuracy. Switching to an N-Trig pen solves these problems, albeit with support for ‘only’ 256 levels of pressure sensitivity. 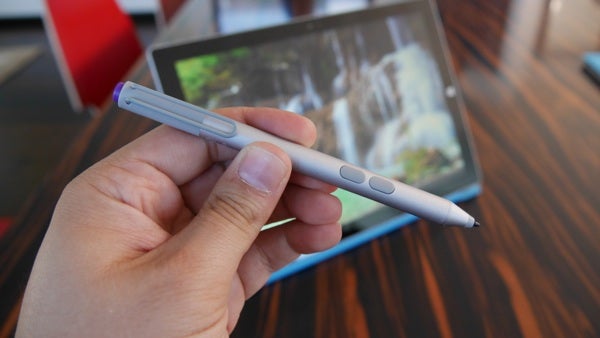 The improved accuracy makes the Surface Pen better for hand written digital notes, which is where OneNote comes in. Tap the button at the top of the Surface Pen and it will open, even from the lock screen. Double-tap the button on any screen and it takes a screenshot that you can crop and save to OneNote. A single tap when in OneNote creates a new note. The new pen is also thicker and heavier, which makes it nicer to write and draw with.

It’s all neat and clever and the touch optimised version of OneNote works well. Indeed, OneNote is a powerful and effective service all round, one that’s more than a match for the popular Evernote. It’s more flexible and powerful if note-taking is your primary need. Evernote is the better digital filing cabinet, but OneNote is superior for brainstorming and note taking. 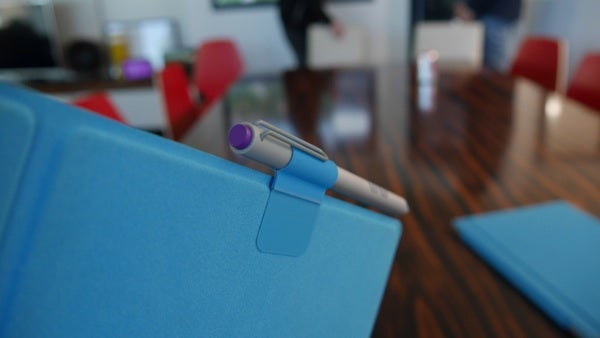 Microsoft has also improved the pen storage a little, though it still feels like an afterthought. You now get a stick on loop with the cover, which is more secure. It still magnetically clips to the side, though.