Microsoft is a dab hand at accessories and the Surface Pro Keyboard Cover is further proof. The basic layout is spot on and the keys are comfortable size for touch typing. They’re even backlit. 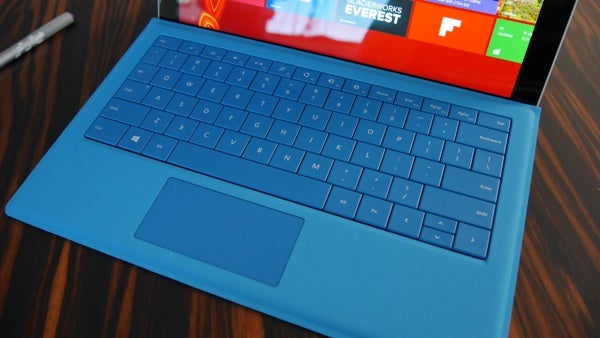 The key action and feel is good for such a thin cover and there’s little flex, even in the elevated wedge position. It’s still not the best when on your lap for reasons we’ve already discussed, but in most other settings it’s just as good as a normal laptop.

Microsoft has improved the touchpad, too. It’s larger than before, which makes it much easier to use. It’s a useful fall back when using the touchscreen is impractical. It’s one more reason why the switch to a larger screen is a big success.

The Surface Pro 3 is well connected for a tablet. It has 802.11ac Wi-Fi and Bluetooth 4.0 for wireless options, a single USB 3.0 port, Mini DisplayPort and a microSD slot that supports up to 128GB cards. There’s a dual purpose headphone/mic jack as well.

There are a couple of problems here, though. First, that microSD slot. That’s great on an ordinary tablet or phone, but less so on something that’s meant to replace a laptop. A full-size slot would be far more preferable.

The other is a pedantic point regarding 4K support, something Microsoft has made much play of in promoting the Surface Pro 3. Yes, it supports 4K but only at 30Hz, which will prove problematic for most people that want to use a 4K monitor. This is a limitation of the Intel chipset, so it can’t be fixed. 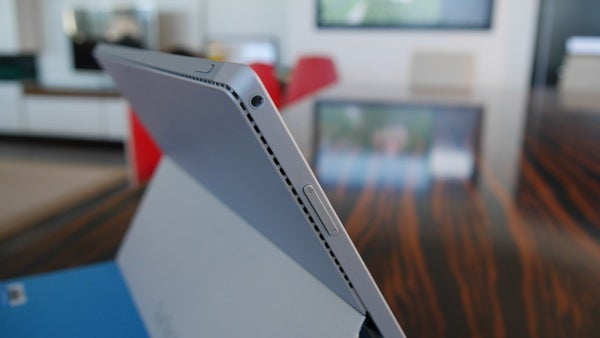 The screen is great, but Windows’ problems with resolution scaling remain. It isn’t entirely Microsoft’s fault, but it’s a sad reality that far too few third-party desktop applications play nicely on high resolution screens. Chrome is one of the worst offenders. It often looks blurry and ugly when in desktop mode, though Internet Explorer and Firefox look fine.

Microsoft could do more here. For example, it would be useful if you could adjust the size of the taskbar independently to the rest of the OS. One crumb of comfort is Adobe Photoshop. It now has two experimental features created specifically for the Surface Pro 3: 200% mode and multi-touch support. These work great on the Surface Pro 3, making it far more touch friendly.

There are front and rear facing cameras on the Surface Pro 3. They’re not worth making a huge fuss over, other than to say they’re competent cameras that do what they need to do. The front-facing camera produces sharp, detailed video that’s ideal for conference calls.

For the power users out there, the Surface Pro 3 Docking Station is worth considering. This £165 add-on lets you quickly dock and undock your Surface Pro from your desktop setup. It adds five more USB ports (3x USB 3.0, 2x USB 2.0), Gigabit Ethernet, extra audio connections and a Mini DisplayPort output. 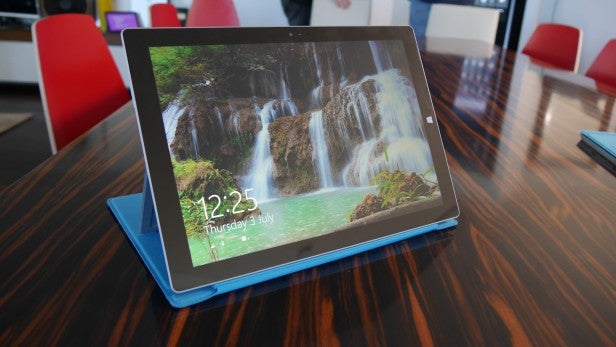 Should I buy the Surface Pro 3?

If you weren’t convinced by previous Surface Pros, the Surface Pro 3 isn’t for you. It’s better than they were, but the core concept and experience is much the same. You need a laptop, so go buy one. A 13-inch MacBook Air or Lenovo Yoga 2 Pro are good places to start.

Why? Because the screen makes it a better laptop and tablet and because the kickstand is finally as flexible as you always wished it was. The Surface Pro 3 still has weaknesses just like any product, but the things it does well it does very well indeed.

Microsoft has finally nailed its tablet hybrid concept with the Surface Pro 3. It’s powerful, versatile and brilliantly put together. Not all laptop owners need apply, but the Surface Pro 3 is a convincing alternative.

Next, read our best laptops round-up or our closer look at the Surface Pro 3 vs the MacBook Air