What is the Surface Book 2?

The Surface Book 2 is the top-dog convertible in Microsoft’s current hardware lineup, sitting above the already pretty swish, and pricey, Surface Pro.

It aims to offer the pinnacle of Windows tablet-laptop hybrid design, featuring a nifty docking mechanism that adds a dedicated Nvidia GPU to the mix, alongside support for the Surface Dial originally seen on the Surface Studio.

This combination of factors make the Surface Book 2 a perfect choice for power users and devs looking for the best Windows 10 experience available.

From a distance, the Surface Book 2 looks all but identical to the original Surface Book.

The tablet part of the device is similar to that of the Surface Pro, featuring the same 3:2 aspect ratio and an identical power and volume configuration; the keys sit on the left of the device’s long top side. The only notable difference is the absence of the kickstand.

At first glance the keyboard’s hinge mechanism – which lets you physically dock the tablet – also looks identical. As before, the keyboard houses the optional standalone Nvidia GeForce GPU and a secondary battery.

The GPU activates when the tablet section is docked in the keyboard and, in theory, will improve the device’s performance when gaming or working on graphically intensive tasks. Undocked the Surface Book’s tablet section runs using lower-power Intel HD graphics. 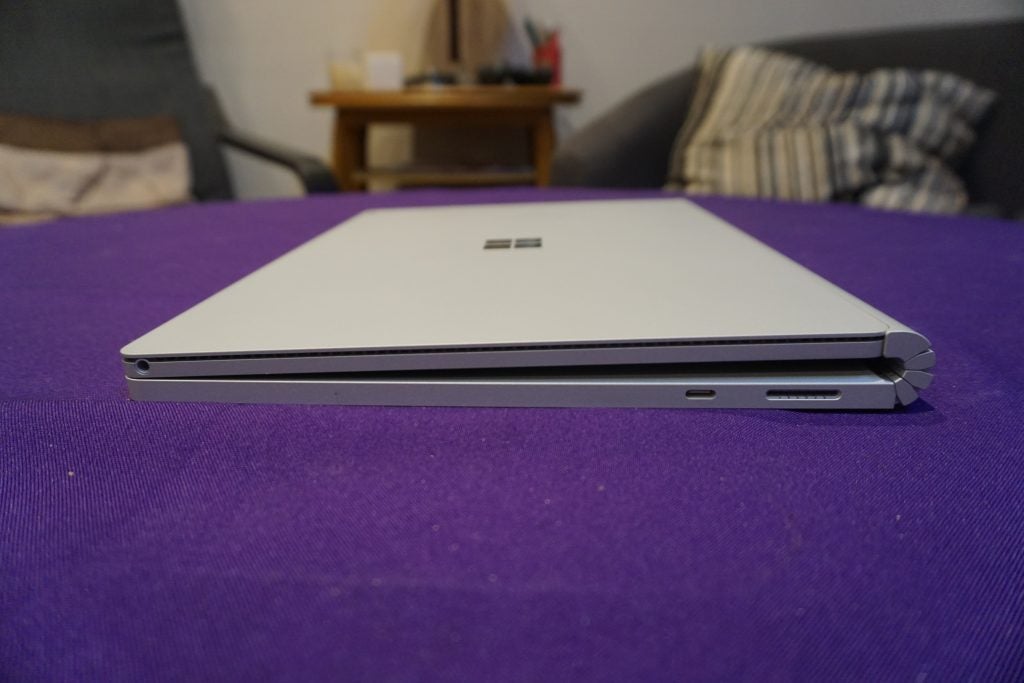 Up close, however, a few subtle design improvements become apparent. For starters, the docking mechanism is significantly more stable. The original Surface Book’s keyboard hinge suffered a minor wobble, which always left me nervous when using the device out and about. The Surface Book 2’s offers zero shake and feels notably more solid by comparison, which is great news for people who plan to use it on the move.

Microsoft has also added a USB-C port to the keyboard section. This, alongside the returning USB 3.0 ports, SD card reader, mini-DisplayPort and headphone jack, should meet most users’ connectivity needs.

My only minor quibble is that the Surface Book is still using a proprietary charger. Given how good USB-C charge speeds are, I can’t help but wish Microsoft had ditched its proprietary input, which adds to the always growing number of cables you need to carry when travelling.

Even without the extra battery and GPU, the Surface Book 2’s physical keyboard is a pretty big selling point.

The inclusion of a physical hinge makes using the Surface Book as a laptop a noticeably nicer experience than with the regular Surface Pro’s Type Cover – which is tricky to use on anything but a flat, stable surface.

Despite having a battery and CPU in the tablet section, the Surface Book 2 isn’t top-heavy and so sits stably, even when the screen is tilted at an extreme angle. It can be used in three different configurations: laptop, stand and flat. The stand lets you turn the screen round to face away from the keyboard, while the tablet mode lets you sit the screen flat on the dock.

The keyboard itself is also pretty impressive. The backlit chiclet unit is reasonably well spread out, offers decent travel and, while not quite as tactile as I’d like, is more than comfortable enough to work on.

The Microsoft Certified trackpad is suitably large and, outside of the MacBook, is one of the best I’ve tested. Throughout my time with the Surface Book 2, the trackpad has enacted multi-touch and basic commands with zero issue. 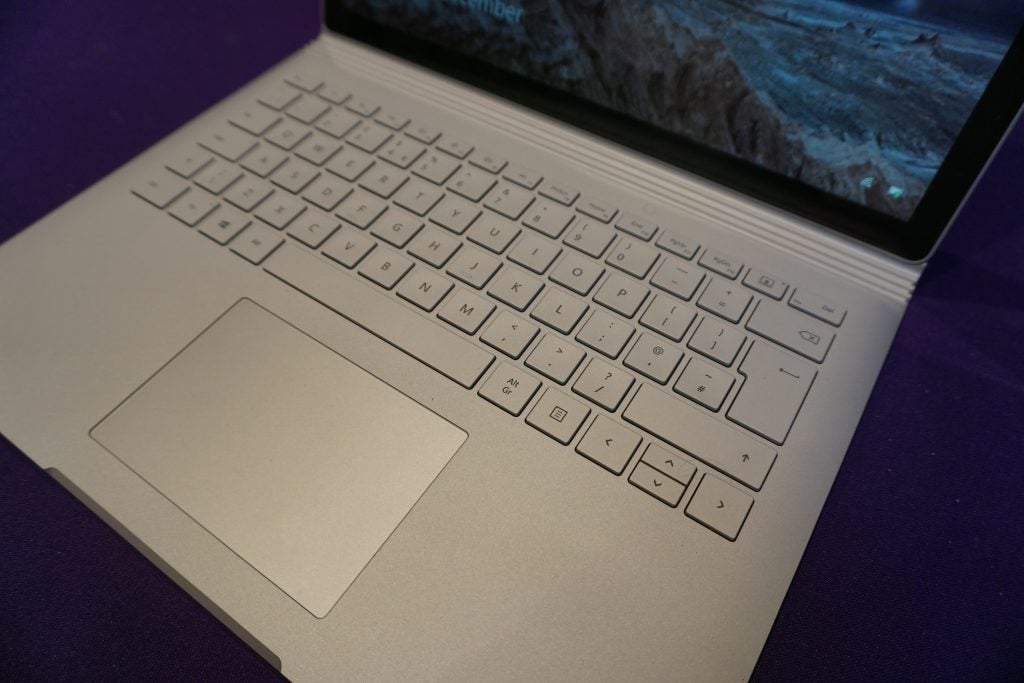 Screen performance has always been a bit hit and miss on Surface devices. Traditionally, Surface screens’ high resolutions and maximum brightnesses have made them great for regular consumers. However, poor colour gamut coverage has made them less attractive to the creative professionals to whom Microsoft constantly markets its Surface devices. This remains the case with the Surface Book 2.

The 6577K colour temperature is a hair’s breadth from the 6500K ideal, resulting in colours that look wonderfully accurate – being neither too cool or too warm.

Things get a little dicey when it comes to colour gamut coverage, however. The 92.7% coverage of the sRGB space is fine for day-to-day use, but the Surface Book 2’s 64.4% Adobe RGB and 66.4% DCI-P3 gamut coverage will be an issue for creatives.

The Adobe RGB and DCI-P3 gamuts are used by many creative professionals and dictate the range of colours a screen can accurately display. As a rule of thumb, any serious artist or photography display should cover 80-90% or above. 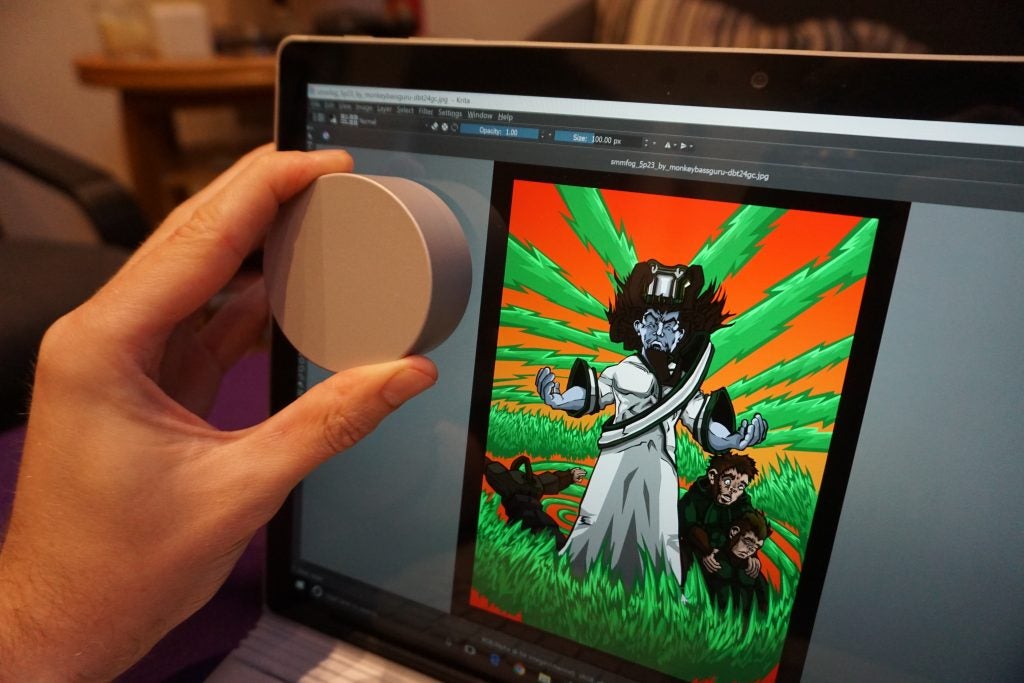 The screen figures are a little disappointing, especially when you consider that the Surface Book is otherwise a superb device for creatives. More so if you invest in the optional Surface Pen (£100) and Surface Dial (£90).

The latest-generation Surface Pen is a little on the pricey side, but it ticks all the right boxes for digital painters and designers. Featuring a whopping 4096 pressure-sensitivity levels, outside of the Wacom MobileStudio Pro, there aren’t many tablets as accurate as the Surface Book.

This makes the Surface Book wonderfully intuitive to use when working in creative suites such as Adobe Photoshop or 3D Studio Max. The pressure sensitivity also works with common freeware creative suites, such as Krita – although I did notice slight latency creep into the mix on some.

The Surface Dial makes things even better. It was originally launched with the Surface Studio, and in my opinion is one of the best things to happen to the Surface line. The dial acts as an customisable control when placed on the Surface Book’s screen, letting you scroll through active layers or adjust brush sizes in Photoshop, for example.

I was initially concerned that the Surface Book 2’s 13-inch display would prove too small to sensibly use the dial while painting. To my surprise, however, it worked brilliantly.

Working in Photoshop, the dial and pen combo offered one of the best creative experiences I’ve had in quite some time. The only minor issue is that the dial didn’t play nice with any of the third-party freeware applications I threw at it. This might be a problem for indies and enthusiasts working in programs such as Krita and Blender.