The Q-BE MP3 player from SupportPlus is touted as the world’s smallest MP3 player, which I guess it is as long as you measure cubic centimetres. The Q-BE measures a mere 24 x 27 x 25mm (WxHxD) – the extra height being the lanyard hoop – so although it’s tiny, its square shape makes it a lot thicker than other dinky MP3 players. This is really a matter of taste and if you prefer something that you show off as being tiny you’ll love the Q-BE, but I’d rather have something that can slip into my pocket comfortably. 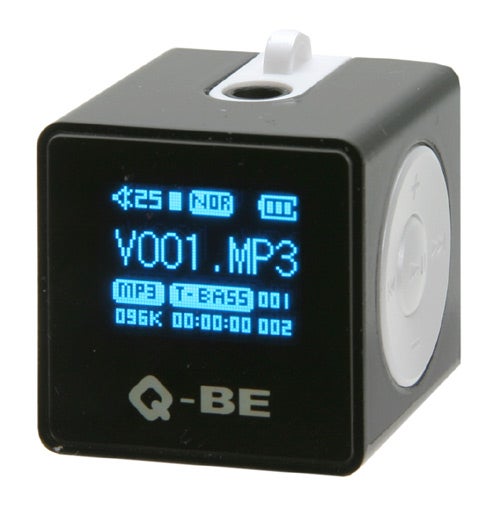 The Q-BE will play MP3 and WMA as well as DRM WMA content. It’s a shame that it doesn’t support more formats, but it is always possible that this will be added in a future firmware release. Files are transferred via drag and drop in Windows and you can create your own folders – which is also the only way to make play lists.


But size isn’t really the most important factor of an MP3 player, sound quality it far more important. The supplied headphones don’t impress in terms of sound quality, nor build quality. If you want to use the Q-BE as intended – that is having it hanging around your neck – you don’t have a lot of choice but to use the included headphones. The reason for this is that they’ve been designed as a neck strap, something that has become popular with many recent MP3 players. 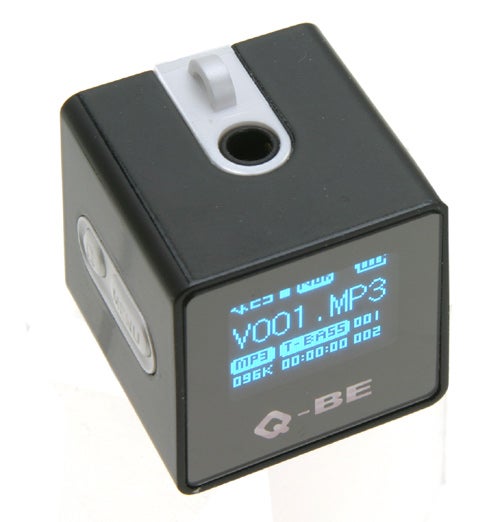 I plugged some better quality headphones into the Q-BE and the sound quality was vastly improved – although it might not be the best player around, the sound quality is definitely on a par with most decent players. There is a wide range of equalizer settings, including SRS, Trubass and WOW. If you’re not happy with the default settings there is a user selectable equalizer on top of the preset modes.

Using the Q-BE isn’t as easy as it should be – something of a downfall due to it’s tiny size – and by having buttons on two sides you end up pressing the wrong buttons at times. This happens if you’re holding it with one hand and not paying attention on were you rest your fingers, as you end up pressing the menu key when you manipulate the control buttons on the opposite side. 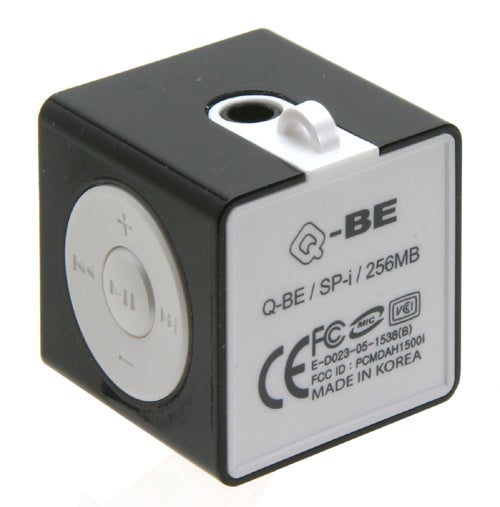 It is also quite difficult to navigate the Q-BE, again this has a lot to do with size. I’m all for small devices, as long as you can use them, but in this case it all seems to have gone a bit too far. The menu button is used for both accessing the menus and for accessing the file browser. This is done by pressing it for different lengths of time, but more often than not you end up in the menu rather than the file browser.


The menu system is navigated by using the four-way rocker on the right hand side – which is also the track forward/backward, fast forward/backward and volume up/down button – which has a quite stiff action. The menu options are Music, FM, Settings, Recording and Listen. The first four are fairly straight forward, but you might wonder what the last one is for. Well, it’s for playing back voice recordings, as these can’t be played back by browsing to them in the file browser under music mode. 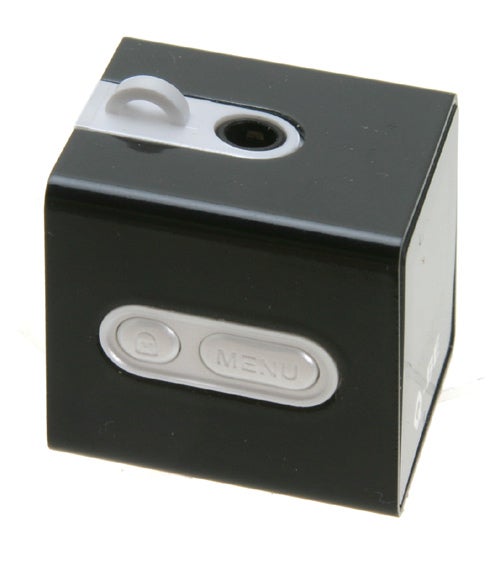 The settings menu allows you to change the equalizer, the screen, the time – including automatic power downs – play mode, recording modes and bit rates. Finally there is an option to reset the player to the default settings.


The built in radio has auto tuning and you can save channels to a preset. You can also record radio programs to the Q-BE as long as you have enough space free.

The display is tiny, but as the Q-BE is using an O-LED display it is bright and easy to read. The main problem is that the tiny dimensions make reading track names and even artists quite laborious at times. 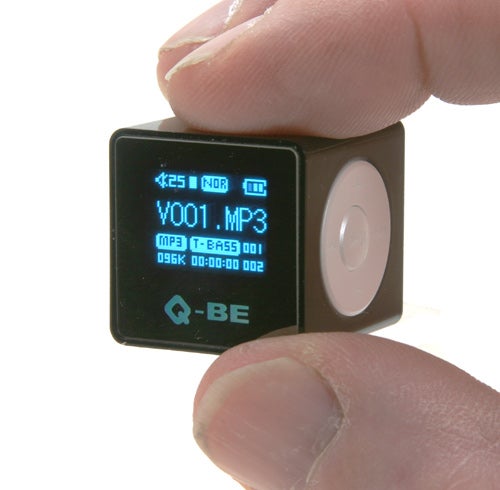 Apart from the headphones you only get a special USB cable – that connects to the headphone jack of the Q-BE – and a protective rubber skin case – although this will only protect the sides of the player – in the box alongside a CD with some audio ripping software and a manual.


Oddly enough I couldn’t get the Q-BE to be recognised by my office machine, although it installed flawlessly on my PC at home. Transferring files to it isn’t lightning fast either as it has a limited USB connection speed due to the special connector. Still at 25Mbit/sec it’s not slow, but it is a lot slower than the USB 2.0 standard. The player is also charged via the same USB cable, so unless you have regular access to a computer, you won’t be able to charge it. 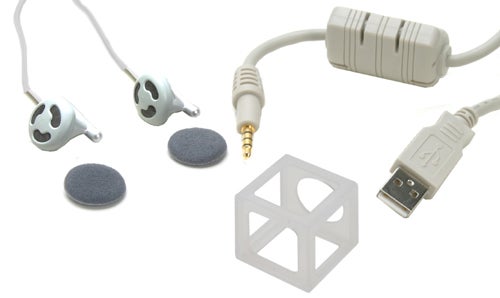 The Q-Be might be the world’s smallest MP3 player, but there are many small players on the market that offers the same features with vastly improved navigation. It has all the features and more than I expected from such a tiny player, but if it’s a nightmare to access those features, they don’t count for much.


It is not the most affordable MP3 player around either as the 512MB model would set you back £74.99 – available in black, pink and blue – and the 1GB model is £99.99 – which comes in silver or red. The 256MB version that we were supplied won’t be sold. Considering that you can get a 2GB iPod nano for £139 and be treated to superb navigation control and iTunes integration, the Q-BE doesn’t look like a compelling option.


The Q-BE shows how small something can be, but its square shape makes it awkward to use and uncomfortable to carry around in your pocket. It’s not a bad MP3 player by any means, and although size definitely does matter, it shouldn’t be at the expense of usability.