Like them or not, speakers in mobile phones and MP3 players are all the rage these days, with countless unruly youths on just about every form of public transport going bopping away to the latest slammin’ tunes using their preferred portable media playing device. Okay, maybe I’m exaggerating, but the fundamental point remains, far too many of these devices now sport built-in speakers and they all share one universal constant: the quality is awful. 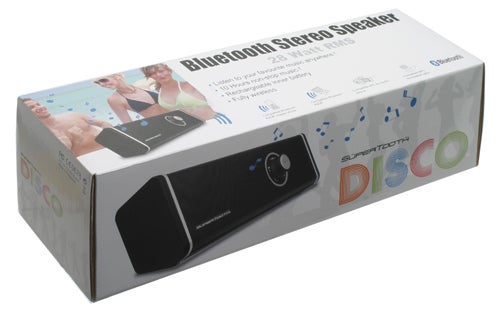 It is for that reason, then, that devices such as the Supertooth Disco exist. With the Bluetooth 2.0 protocol finally providing enough bandwidth to make streaming music possible without causing physical discomfort to listeners, numerous A2DP speaker sets have begun to proliferate the market, offering to make listening to music on-the-go using a mobile phone a more pleasant experience.


Obviously a portable Bluetooth speaker set is never going to offer the same quality as something like the Creative Gigaworks HD50s we looked at recently, but a trade-off in quality to add portability is likely to be perfectly acceptable for many. Is, then, the Supertoth Disco one such device? Does it keep the right balance between battery life, weight, size and sound quality?

First things first, regardless how it performs, the Supertooth Disco makes the right impression out of the box. When first removed from its packaging the speaker set is wrapped in a neoprene carry case which has a decent amount of padding at the front, save for a recess accommodating the volume knob. There is also a flap at the rear, secured with Velcro, which enables quick and easy access to the 3.5mm jack, for connecting a non-Bluetooth fitted MP3 player or similar, and the power input for charging the internal battery.


On the subject of batteries, the paperwork with the Supertooth Disco claims that it should pull around three to four hours of play time at full volume and around 10 hours at medium volumes. Taking the battery from drained to fully charged takes three hours. It’s worth noting that the power adaptor supplied was a two-pin job, intended for European sockets, and didn’t play ball with some of the UK plugs in the office; specifically those which require the third, earth, pin to push in and uncover the remaining holes. Yes, it’s a small gripe, but is it really so hard to supply a UK adaptor?

So design wise the Supertooth Disco is solid but unspectacular, but how about its performance? Well, on the volume front, things start well. In the TrustedReviews office it was only necessary to turn the speaker up to a third of its maximum to allow the entire office to enjoy ‘Just a Minute’ played back using the BBC’s iPlayer during a lunch break. In an environment which has a high level of ambient noise, what with the countless work and testing systems constantly running, that’s not all that unimpressive a feat.

Of course there is a flip side to that, even if the volume of the speakers needed to be increased, going much higher causes a noticeable degradation in audio quality – the 12W sub and 8W left and right channel drivers simply aren’t good enough to cope with high volume levels. That said it is highly unlikely the Supertooth Disco would be used as a primary audio system and for background listening, at high enough volumes to use, the speakers’ clarity should be sufficient. The Bass Boost function of the speakers is also pretty good, adding a decent resounding low-end to any music that needs it, although again moving to high volumes you’ll end up simply amplifying the distortion.


In terms of Bluetooth audio streaming, specifically using A2DP, things are as one would expect, with no compression or distortion of the audio as compared to the same track played over a 3.5mm lead. Muse’s Supermassive Black Hole, for example, demonstrated that, as previously suggested, the limitation of the speaker set is definitely the volume level to which it can be pushed rather than the Bluetooth streaming. 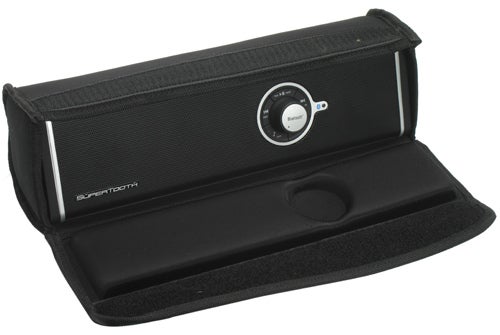 Pairing is a blessedly simple process. Simply holding down the power button for a few seconds will have the LED flash red and blue alternately to let you know the device is ready to be found, whereupon you simply search for the ST Disco on your Blurtooth enabled device, connect it and go. Range wise we managed to take a phone about six meters or so from the speakers before losing the signal, which is within reasonable expectations. Realistically no user is likely to want any better separation than that, and it certainly beats any cable of a usable length.


Depending on what phone you use you’ll also be able to pause and skip tracks using the Supertooth Disco itself. iTunes and Windows Media Player responded just fine to the controls, as did an LG Viewty. While, for the most part, it’s probably just easier to whip out whatever you’re using to stream the music in the first place and manage music directly, having the option on the speaker itself is always better than not.


So far everything sounds so good (no pun intended) and in most respect it is. Unfortunately, where the Supertooth Disco falls down is on price. The suggested retail price is £99, which is a significant amount more than rival system, the Gear4 BlackBox. While the Supertooth Disco probably has the edge on audio quality, it loses out in terms of features and design. On balance, then, the same downfalls suffered by Gear4 are present here as well – for the asking price you’re just not getting enough.


There’s a lot to like about the Supertooth Disco Bluetooth speaker. It doesn’t look half bad, it sounds OK and unlike many rivals, it doesn’t sacrifice sound quality when using Bluetooth as the audio source. Sadly the asking price is a little on the high side, though if the rechargeable battery appeals then it’s one reason to give it some further thought.