Available on PC, coming March on Xbox One

Superhot may or may not be the best shooter of 2016, but I suspect it’ll be the most powerful and influential. It would have been enough had Superhot Team crafted a game this tight around a brilliant core mechanic, but to make it so thought-provoking and disturbing is a sign not just of craft but of art.

Of course, it looks like an art house shooter, with its stark, beautifully lit white spaces and its crystalline foes: the red dudes. It’s your job to wipe them out from each level using whatever weapons come to hand, which could be a tall order given that you’re always outnumbered and often out-gunned. This is where Superhot’s twist comes in. In this shooter, time only moves when you do. 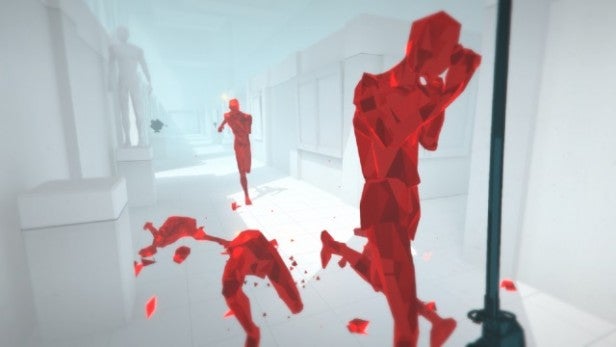 Move forwards, fire a gun, even turn and time crawls forward at the same speed. You have time to trace and predict the trajectory of bullets, twist and shoot. You can punch a red dude, grab his gun and blast the guy behind him. Take and hurl a vase at an armed opponent, and you can watch him fall backwards in delirious slow motion, his baseball bat or shotgun careering towards you for an easy catch.

And so each level goes, you picking your way through a string of collisions and a hail of bullets, working out the best way to take each red dude out in turn. You’ll die, dust yourself off, take the instant restart and have another crack. It seems like every great scene from every great action move is in here, from a gunfight in an elevator to a stand-off at a station to a massacre in a bar. And with your superhuman perception and combat abilities, you’re a John Wick, a Christian Bale in Equilibrium, a Bruce Willis in Last Man Standing or a Chow Yun-Fat in The Killer or Hard Boiled.

Superhot makes you feel like the ultimate badass, then treats you to a replay when you get the killing done. 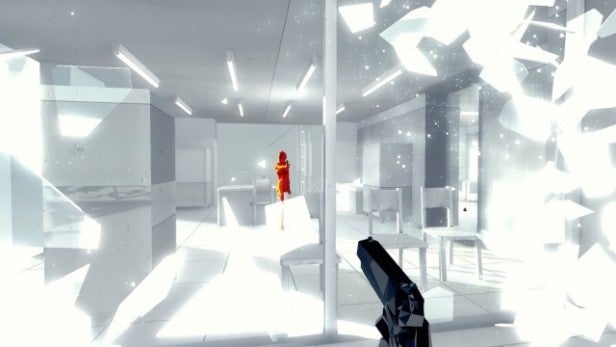 Words like addictive or compulsive don’t come close. This is the kind of game where hours of sleep go unslept, coffee goes undrunk and every failure leaves you twitching for just one go. The levels are deliberately short and sweet. One hit is fatal to you, but you rarely have to repeat more than a minute or two’s play. You can crack Superhot’s campaign in just one sitting, but the key thing is that you’ll want to: it doesn’t feel like you have any other choice.

Perhaps that’s deliberate. Superhot wants to be more than just an innovative, violent game; it’s also an innovative game about violence. The story – ingeniously told and brutally effective in its sheer paranoia – wants you to think about why you like doing this.

What’s the pleasure in gunning down goon after goon after goon, especially in a game with virtually no explicit plot or rationale? It’s also a game about complicity and control. Why do you do the things you do just because you’re told to? Why can’t you stop even when you’re doing something that you think could be wrong? 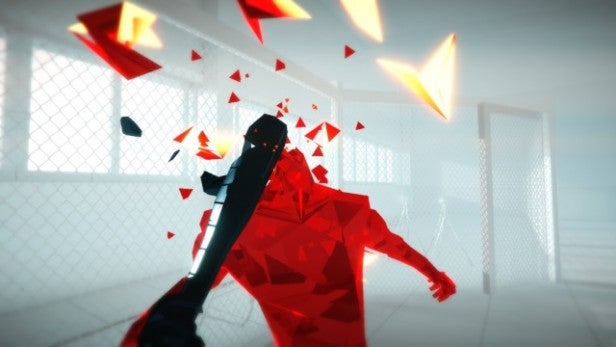 The way this plays out is fantastic, and I wouldn’t want to spoil a second of it for you. In every aspect – visual design, sound design, language, the way the phrase ‘super hot’ is endlessly repeated – it already feels like an iconic game. And when it’s over in just two to three hours, Superhot still has more. There’s an Endless mode, where you tackle a series of score attack levels, pushing to get more kills in before a bullet or a blow finds you.

There’s a superb Challenge mode, where you’re asked to speedrun levels, speedrun them with the clock still ticking when you’re not moving, or even use only one weapon: the katana. You’ll think about what Superhot is trying to tell you, but you’ll want to keep playing more. You’ll battle on, you’ll watch your replays, you might even upload them to the game’s built-in sharing service. Should you be so proud? 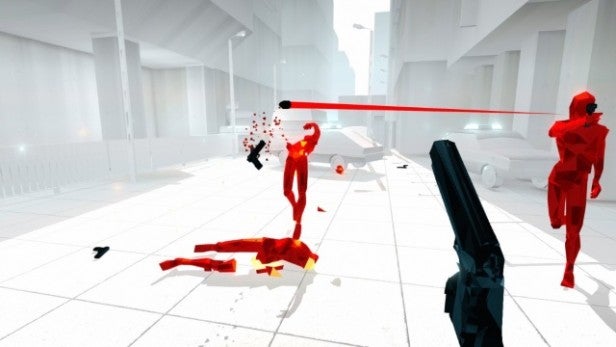 In the end, I’m not sure whether Superhot really has a conscience, or whether its narrative tricks are all just part of its overwhelming cool. A handful of levels also leave me doubtful as to how far the game allows you to improvise or whether you’re – effectively – trying to work out and follow someone else’s fight choreography.

In most levels this doesn’t seem to be the case, but some later efforts barely give you room to breathe, let alone think outside the box. In the final analysis, it doesn’t matter. Superhot might be short-lived, but it’s a tightly wound thriller that burns fast but incredibly brightly. Expect other shooters to copy it – perhaps the very shooters we should be thinking a little more carefully about.

Superhot could well turn out to be the year’s most ingenious and influential shooter, transforming each taut action scene into both puzzle and wish-fulfilment spectacle. It’s short and can feel proscriptive, with trial and error woven into its DNA, but it’ll make your heart race, your adrenaline surge and your mind work a little harder. It’s a bold, brief and brilliant blaster.