There are times when I’m reviewing some Nintendo games that I have to ask myself the question: is this game really as great as I think it is, or is it just that it hits so many of the right nostalgia buttons that I can’t really tell the difference anymore? This came up a lot when I was looking at Legend of Zelda: The Twilight Princess, and again when I’ve looked at the likes of Super Mario Galaxy, Mario Kart Wii and Super Paper Mario. In most of the above cases I’ve been able to answer myself “Don’t worry! It really is that good.” With Super Smash Bros. Brawl it’s not that simple. It is, without doubt, an extremely good game, but is it the 10/10 masterpiece you might think it was from the scores on Metacritic? Of that I’m not so sure. 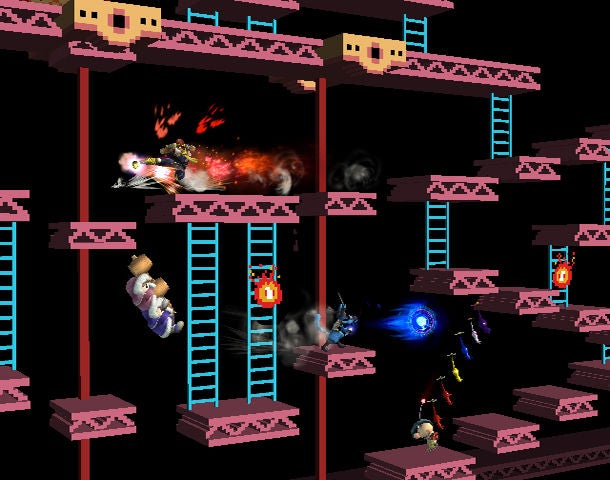 Of course, if like me you’re a long-term Nintendo fan, then Brawl is going to rekindle a lot of warm memories. The Smash Bros. series has always sold itself as the fighting game in which Nintendo stalwarts scrap it out, with up to four players hitting the screen at once in the guise of Nintendo heroes, jumping around the 2D level, battering each other off platforms and using a variety of bonus special items to administer vast quantities of vicious looking yet ultimately harmless damage. Brawl ups the ante even more than previous installments. Now 39 playable characters can be found loitering inside, covering everyone from the usual Smash Bros. suspects – Mario, Link, Yoshi, Bowser, Samus from the Metroid games, et al – to less well-known heroes like Ness from Earthbound and Marth from Fire Emblem as well as forgotten vintage Nintendo stars such as Pit of Kid Icarus fame. The game even manages to bundle in Mario’s longtime Sega rival, Sonic, and Metal Gear Solid’s Solid Snake. Play for a while and you’ll also come across a huge range of classic Nintendo scenery, enemy characters and even peripherals, with R.O.B. the NES robot putting in a cameo appearance, and the old SNES SuperScope turning up in the guise of a pick-up weapon. 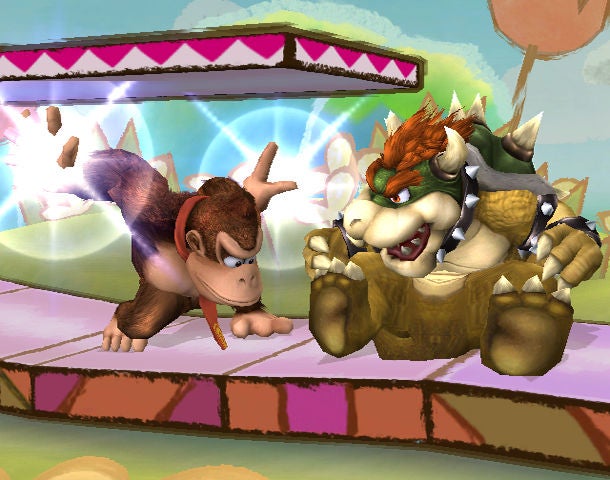 The key to finding all this good stuff is exploring Brawl’s substantial single-player mode. In most fighting games this acts at most like a trainer for the multiplayer option, where the meat of the action really lies. Those games like Tekken or Soul Calibur that have tried to expand it have usually failed. However, Super Smash Bros. Melee on the GameCube delivered a vaguely satisfactory adventure mode, and Brawl takes that to its logical conclusion with a huge single-player adventure called Subspace Emissary. Told over innumerable chapters, complete with snappy cut-scenes and minimal exposition, it expands Brawl from being a beat-em-up with platform elements to the point that it mutates into some weird hybrid, shifting massive-scale scraps to old-fashioned 2D platforming to classic arcade adventure to boss battle, occasionally within the space of a single level. 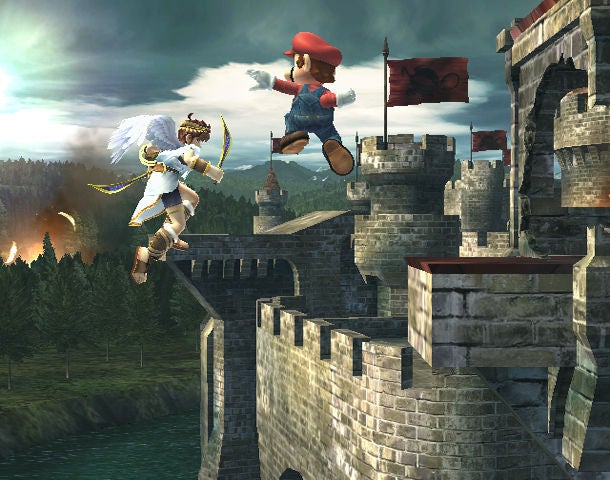 It would be worth playing through Subspace Emissary just to see how HAL Laborotories can manage to tie characters as disparate as Samus, Link, Yoshi, Sonic and Pikachu into a single storyline – it’s all very spurious, yet all oddly wonderful. However, there are actually some beautifully designed levels to be played through, full of the sort of imaginative touches we used to look for in Nintendo’s classic 2D games. What’s more, it’s only by ploughing through Subspace Emissary that you’ll unlock all the playable characters. It’s a shame that the mode outstays its welcome with some dull chunks as time goes on, but the fact that you can play through the whole thing with two players, the second dropping in and dropping out, helps keep the action flowing. Bundle in a more traditional stage-by-stage battle mode and a set of challenge scenarios, and Brawl is an engaging way to waste your time away, even if you’re on your tod. 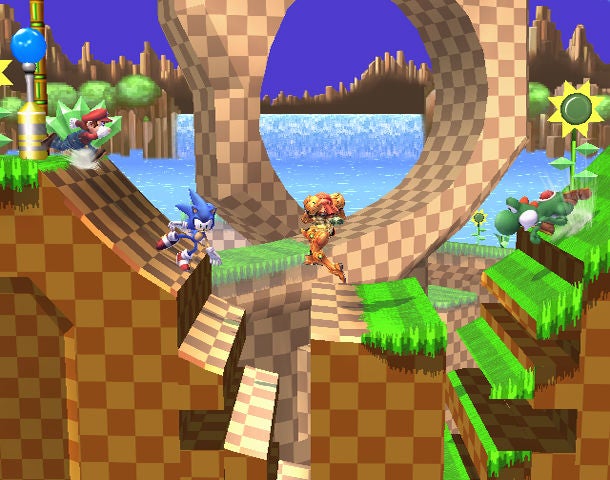 To shine, however, Brawl needs additional players. The good news is that, unlike most fighting games we can mention, it’s perfect for playing with family or less game-obsessed friends. The reason is simple. At first, Brawl is a bewildering experience. With four characters fighting simultaneously, interactive events happening in the backgrounds, weapons and power-ups dropping all over the place and platforms shifting position while the camera pans and zooms, there’s an awful lot to take in. However, get stuck in and the combination of simple controls and very straightforward game mechanics makes it all come together very quickly. And while there’s plenty of depth to be found if you study the characters and work out their special moves, it’s still possible for a novice to win just by mashing buttons like their life depends upon it. In other words, Brawl rewards you for just taking part, and it’s not a game that can easily be dominated by smart-ass players who like to rub their experience in the faces of others. What’s more, the sheer number of characters helps to balance things out. All have their obvious types (heavy, speedy, good at range attacks) and clear strengths and weaknesses, but with so many to choose from, no one hero or villain can dominate for long. 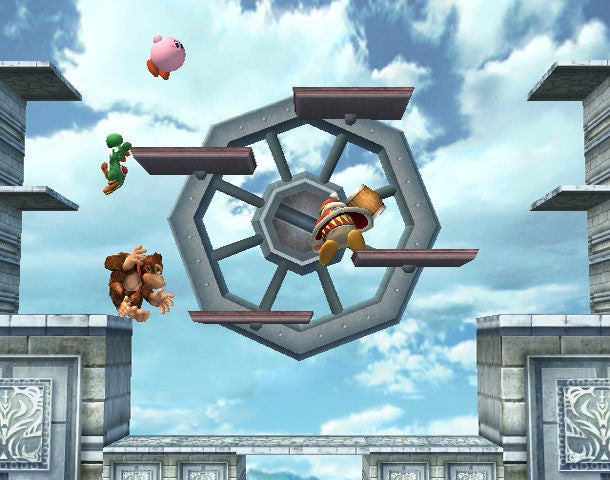 As a result, Brawl is a loud, brash, blast of a game when played in company – though it helps if your fellow players are inclined towards mindless violence, slapstick humour and silliness. I’m afraid that some people just won’t get the point. Luckily, even if that’s the case in your household, Brawl has something new to bring to the table. Hook up your Wii to the Nintendo WiFi Connection and you need never be without a decent scrap. It’s easy to find 1-to-3 players to battle it out with, and while I have experienced some painfully laggy matches, I’ve also had some very slick little melees. You can practice with virtual punchbags in the lobby while you wait, and it’s possible to hook up with friends or strangers via invite and match-making facilities. The online play isn’t quite as well integrated as it is in Mario Kart Wii, but it’s still relatively painless and transparent. 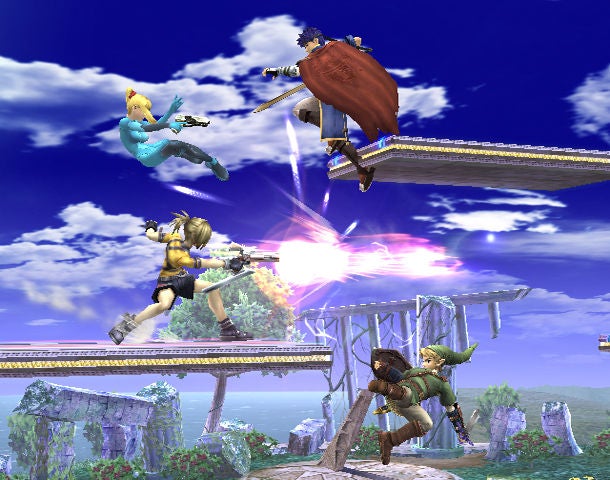 Visually, Brawl is one of the slicker productions on the Wii. Its pseudo 3D stages have a lovable old-school Nintendo style, but the game can throw in lashings of background detail when it wants to, and the characters are brilliantly rendered, lit and animated, with plenty of awesome flash and particle effects. The only minor criticism is that there are times when the view zooms out so far that only those with a large HD screen will be able to see what’s going on. 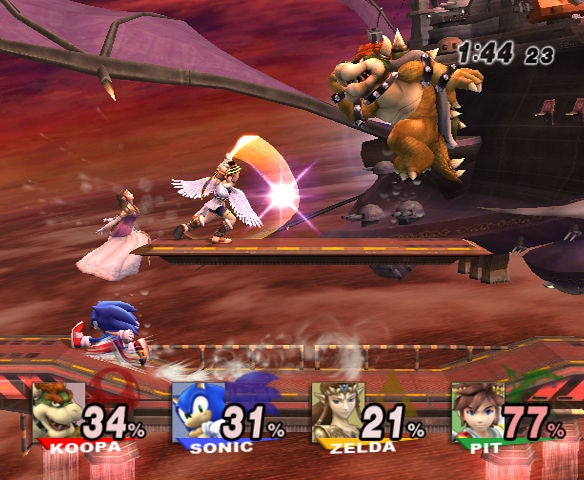 Level design, meanwhile, is the strongest of the series to date. Levels based on familiar Mario, Donkey Kong or Zelda environments are a no-brainer, but it takes a weird sort of genius to put together something like the Pictochat stage, where platforms and hazards are literally sketched onto the screen before your eyes. It’s also great to see stages based on Sonic’s Green Hill Zone and Metal Gear Solid’s Shadow Moses in a Super Smash Bros. game. It’s clear that Brawl was built with a real love for video gaming as a whole.


So why am I not slapping a 9 on it and telling anyone and everyone with a Wii to buy it? Well, it’s partly because I think only real Nintendo fans will get the most from it. Brawl isn’t a superficial game by any means, and the action has the potential to keep you hooked for long periods of time, but unless you know who Olimar or Gandondorf are or have some emotional connection to the Metroid, Mario and Zelda sagas, then you may be left wondering why everyone thinks this experience is so special. It’s also because, while Brawl is an awful lot of fun, it’s not as rich or magical an experience as, say, Super Mario Galaxy, GTAIV or Bioshock, and nowhere near as big a step forward for gaming or a genre. 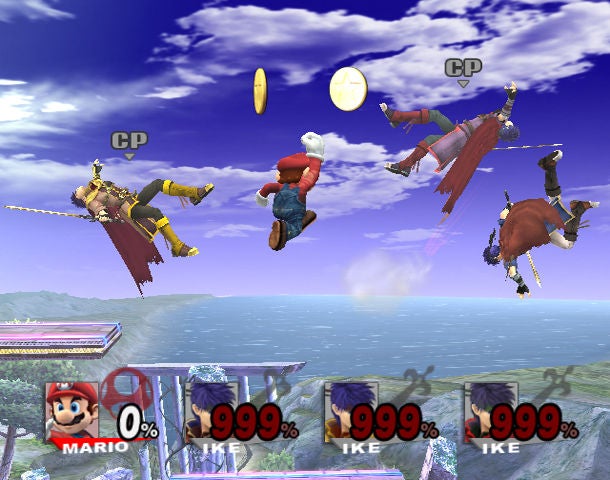 Don’t be too put off. If you bought your Wii because you HAD to play the next Mario or Zelda, then you should have bought Super Smash Bros. Brawl already. Get it now; you won’t be disappointed. And if you just bought a Wii because of the hype or because it seemed fun, then you can still buy Super Smash Bros. Brawl in the knowledge that you’ll enjoy thrashing seven bells out of mates or close relatives, and they’ll enjoy doing much the same to you. If, however, the whole thing sounds rather pointless and silly, then Brawl probably won’t change your mind. It’s another strong, core Nintendo title, but would I love it quite so much if I didn’t have those nostalgia buttons to push? I think so, but I’m not 110 per cent sure.


A must for Nintendo fans, and strongly recommended to anyone with a Wii, Smash Bros. Brawl is the ultimate Nintendo universe fighting game.