Like so many great ideas, Super Monkey Ball Deluxe is ludicrously simple. Take a hairy ape, stick him in an oversized hamster-ball and stick that hamster ball at one end of a floating, essentially 2D surface, with a goal at the other end. Ensure the terrain in between is full of gaping chasms, tiny catwalks, moving platforms and assorted paraphernalia, then ask the player to get the ball from one end to the other. While they’re at it, they may wish to collect some bananas. Oh, and remember the twist: the player can’t actually move the ball; only tilt the landscape to influence the ball’s movement. Scratch what I said first – this idea is simply ludicrous. 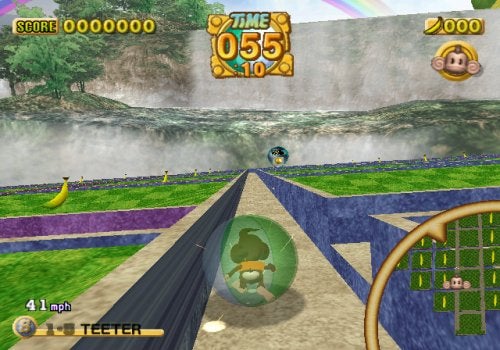 But then it works. Super Monkey Ball was arguably the star game of the Gamecube launch, and SMB2 made it work even better. The only bad news was that you needed a Gamecube to play it, leaving our beloved apes to languish in undeserved obscurity while the casual-gaming masses bought Sonic Heroes instead. Hopefully, the arrival of SMB Deluxe on PS2 and Xbox could change that.


Essentially, this is a SMB compendium, with the single player story mode added to SMB2, plus SMB’s levels, some of SMB2’s levels and 49 brand spanking new ones as well packaged into the challenge mode. And don’t worry – those legendary party games are here in full attendance. 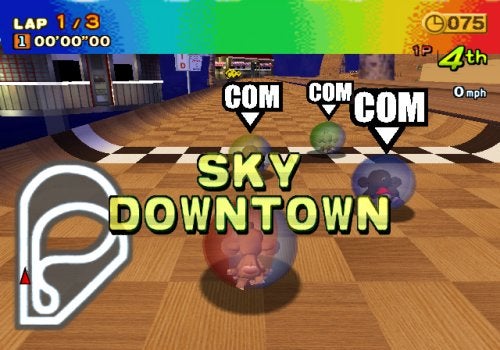 It’s probably Story Mode that gets your attention first, and it’s here that anyone over the age of five might have that make or break Monkey Ball moment. The graphics are lovely, but in a relentlessly cute way, and the plotline is amongst the most bizarre ever committed to a video game. Apparently, the shunned Dr BadBoon takes revenge on the monkeys of Jungle Island by stealing all their bananas, then, rejected by SMB heroine MeeMee, he decides to sink the whole shebang by placing a bomb in the volcano. Later, BadBoon and the four SMB heroes, AiAi, MeeMee, Gongon and Baby are swallowed by a giant whale, for no apparent reason. You’ll either like – or at least tolerate – this quirkiness, or you won’t. But if you don’t, then you’ll end up being the loser.


Here’s what you really need to know about Story Mode. It starts out fairly challenging, and soon gets fairly tough. Just when you’re getting used to the slim, undulating paths and nasty bevelled surfaces, in comes jumps, tight curved runways, shifting or twisting platforms, rapidly moving goals, conveyers and a range of other horrors. A few worlds in, it starts to combine them. As a single fall off the edge means repeating the level, it’s no surprise that playing SMB is an experience right on the edge of frustration – Super Monkey Ball now, Ultra Stomach Ulcer later.

The fact that it rarely steps over that edge is down to two things. Firstly, all the levels, no matter how difficult they look, can be completed. Sometimes it just takes the courage to go belting through the whole thing at speed, at other times a steady, painstaking approach is needed. Sometimes it takes a brilliant strategy, or just a clear head and some simple, dogged persistence. Admittedly, there’s always the dilemma of whether to head straight for the goal or pick up that juicy bunch of bananas near the edge, but you can make up your own mind on that one.


Secondly, SMB2’s story mode did a solid job of removing two of SMB’s biggest frustrations. There are no more lives or continues to cope with, so none of the weeping and gnashing of teeth involved when you lose everything on one bloody level after sliding through the rest first time. The action is broken into approachable stages, and these worlds give you a choice of what levels you tackle and in which order. If a level really gets you down, just avoid it – you lily-livered wuss. 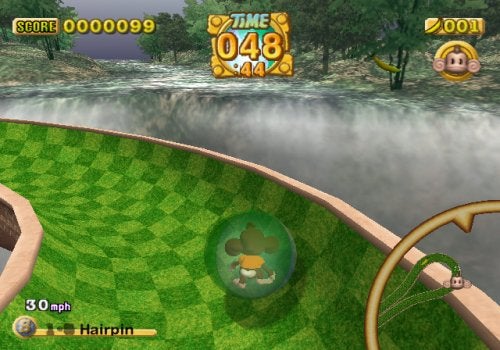 If you prefer things hard and old-school, you can always settle in for the appropriately named challenge mode. The easy levels are actually the simplest introduction to the game (and good practice for story mode), but after that things get difficult, then very, very, very hard. Even Monkey Ball masters will struggle with some of the trickier efforts, but look on the bright side – don’t you hate a game you can just breeze through?


One of the reasons to persist used to be that you needed single-player success to unlock the various eccentric and brilliant party mini-games. In SMB Deluxe, however, they’re all open from the off. While this loses a little of the sense of reward, you can’t complain too much. SMB’s mini-games are the best in the business, as perfect for post-pub play as for those Sundays when your sister and the kids turn up unexpected. Again, simplicity is the key. Most (with a few exceptions) utilise just the main analogue pad and one button, and all have very basic mechanics and objectives. 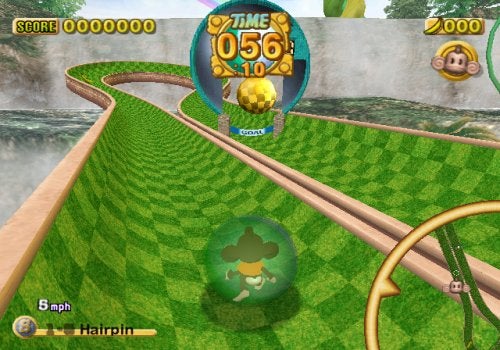 We can divide these up into three basic groups. The Good include Monkey Race (think Kart racing with monkey balls), Monkey Fight (the ball is fitted with giant boxing gloves and you knock each other off the edge of the map), Monkey Target (glide your monkey down onto a target, grabbing bananas along the way), plus Monkey Billiards, Monkey Bowling, Monkey Golf, Monkey Tennis and Monkey Dogfight (I’ll assume these are obvious). The bad is limited to just one game, Monkey Shot (a simple on-rails shooter with zero entertainment value).

In the Ugly category we have Monkey Soccer (just too frantic for any real control), Monkey Boat (a river racing game that looks fantastic, but suffers from a ghastly rowing system) and Monkey Baseball (unless, for some reason, you actually like Baseball). All take practice to get the most of – making it best to start off with a group of similarly inept friends – but once you get the hang of them you’re guaranteed to have a good time. Monkey Target is a particular favourite. Like Burnout’s Crash Junction mode, it’s best enjoyed with a group of mates so you can decry each others aim, route, landing technique and – quite possibly – parentage, in the fierce battle for the highest score. 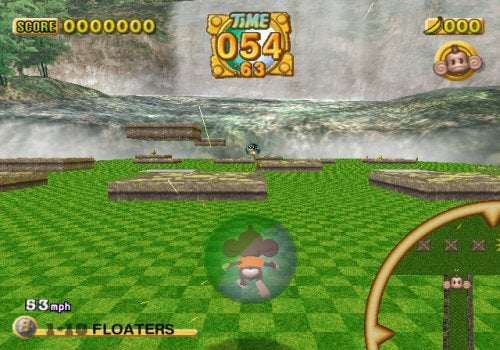 This is a brilliant game, but I’m still not sure about the “Deluxe” tag. I’ll reserve opinion on the Xbox version, not having seen it, but the PS2 version suffers in comparison to the Gamecube’s SMB2. The graphics are still gorgeous, with a great combination of simple, brightly-coloured cuteness in the playing area and outstanding detail in the backgrounds, but they seem to have lost clarity and detail in the conversion. And while the control is surprisingly good when you consider how clumsy the Dual Shock analogue stick can be, the Gamecube controller still has more finesse. The biggest problem, however, is loading times. When the levels are so short the excessive waits in the PS2 version break the rhythm of the game – not a disaster, but certainly an annoyance. 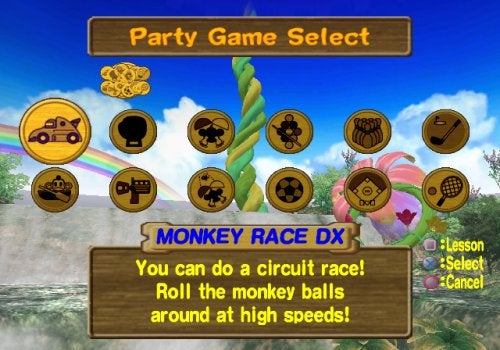 In other words, given the choice I’d rather play SMB2 on Gamecube. If you don’t have that choice, however, then you really should think about buying SMB Deluxe. Go on, you know it’ll make you smile.


A great version of a left-field classic, with the mini-games as enjoyable as ever. However, as it’s arguably inferior to the Gamecube’s SMB2, SMB Deluxe might not be as deluxe as Sega thinks.