Nearly five years ago, Super Monkey Ball was arguably the defining third-party title for the launch of Nintendo’s GameCube. At a time when Sony and Microsoft were waffling on about emotion engines, poly-counts and cinematic gameplay, it was a sign that Sega, like Nintendo, understood that there was still room for games that were simple, addictive and – most of all – fun. Now, with the Wii, Super Monkey Ball: Banana Blitz sits in a similar position. If you wanted a game emblematic of both the promise of Wii and of the challenges it offers developers, you’d be hard-pushed to find anything more representative. Cut from the same cloth as its GameCube predecessors, and unable to count on vastly upgraded visuals for effect, it’s a game whose whole worth rests on the way it can utilise an oblong chunk of plastic containing a selection of motion-sensitive controls: the Wii remote. 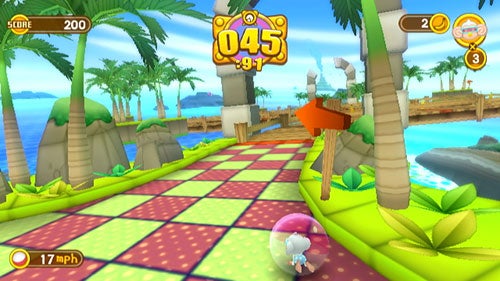 It’s not that the graphics are unchanged. Like the otherwise lamentable Super Monkey Ball Adventure, Banana Blitz has dropped some of the shine and colour of the first two SMB games for a cleaner, cel-shaded look. But while the cartoon imagery looks lovely and some of the backgrounds look more impressive than they used to, nobody ever bought SMB for eye-candy. No, they buy it for the way it plays.


Now, the original SMB was a model of stripped-back elegance: one analogue stick, one ball, one twisting, undulating level, one goal. Few games have worked so well using one control, and fewer still have demanded such finesse with it. As a result, the biggest risk Banana Blitz takes is in replacing the analogue stick with the Wii remote itself, asking you to tilt it left and right to tilt the world and turn the ball, then up and down to move back and forth. The result is more intuitive than you might think, though the shift has had some noticeable consequences. While there’s now arguably more sensitivity in the vertical movements, it seems harder to make swift or subtle movements on the lateral axis – at least at first. 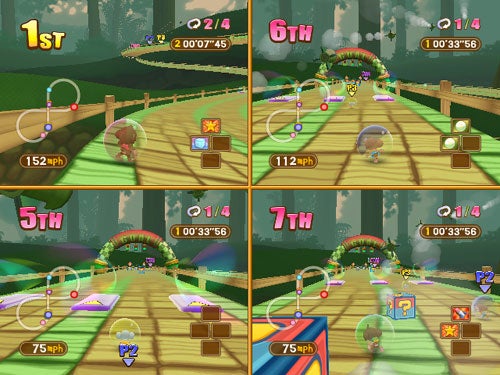 Luckily, the levels have adapted to match: in the early worlds, there are fewer thin winding stretches and more edge-of-level barriers than you’d have found in the first two games, and it takes a while before the ramps and trails hit the truly fiendish heights of difficulty they hit relatively soon in earlier titles. However, that doesn’t necessarily mean Banana Blitz is the easier game. In SMB2’s story mode there was already a noticeable drift from the arcade simplicity of the original towards more conventional platform game dynamics, and while Banana Blitz doesn’t take this to the extremes that SMB Adventure did, it does take further steps in that direction. The most obvious is the addition of a jump button, enabling the sphere-bound simians to leap obstacles and cross yawning chasms. This in turn has encouraged the level designers to use more platform game-style obstacles than ever before, with a panoply of revolving and moving barriers and tilting or floating barriers popping up to separate you from the goal. 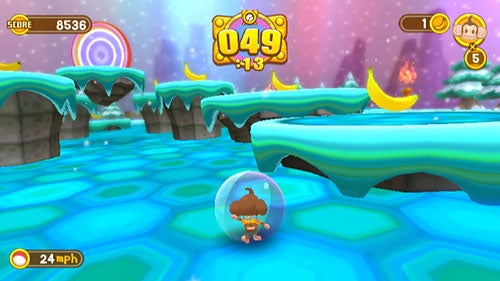 What’s more, the game even throws in boss battles. These generally hold true to the tried and trusted dodge-the-attacks, whack-the-weak spot formula we’ve seen since the days when Sonic and Mario were young, and while they’re not particularly exciting or inventive, they do give the game a sense of structure. Let’s not get carried away: even by the appalling standards of previous SMB games the storyline is ridiculous, and there’s little sense of any progression from world to world bar one of difficulty. However, it does help make this feel like the most coherent single-player Monkey Ball yet. 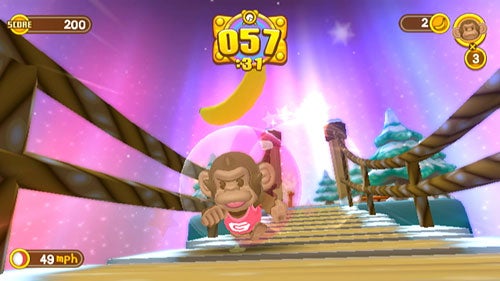 It’s also the most compelling. SMB has always walked a tight line between difficulty and frustration, but with its longer levels and appalling tendency to put a tough bit right at the end Banana Blitz is possibly the most swearword-inducing effort yet – particularly beyond the first three worlds. Yep, the game I like to call Super Stomach Ulcer can still be a tough task-master. Yet, as always, you never feel that the game is at fault; merely that your skills aren’t quite up to the task. There are horrible levels that you think you’ll never complete, but then something clicks, the stars align or maybe you just catch a lucky break and – suddenly – you’ve cracked it. I guess the feeling of triumph is commensurate to the trials and tribulations that came before, but it’s one of the finest gaming offers.


However, the million dollar question is whether Banana Blitz is new or different enough to grab the attention of those who have just invested £179 in Nintendo’s new console, and the answer is probably not. This makes the multiplayer mini-games a more crucial aspect of the game than ever before. 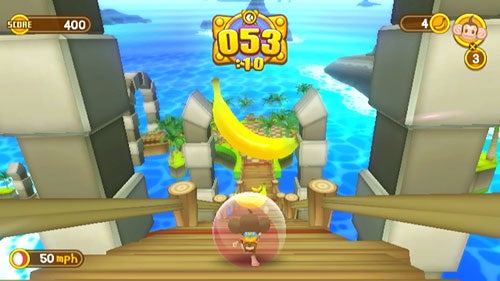 Well, you can’t fault Sega for effort. There are over 50 mini-games on offer here, all of them using the Wii remote and plug-in nunchucks in a variety of interesting and innovative ways. While that sounds like great value, it should also sound a note of caution for the long-time SMB fan. As the series has progressed and new mini-games have been added to the classic Race, Fight, Billiards, Target, Golf, Bowling line-up, so the quality of the additions has seemed to decrease. With so many to choose from, Banana Blitz has you simultaneously hoping for the best and fearing the worst.


In actual fact, neither is true. Inevitably the mini-games are a very mixed bag indeed. When news of the Wii first emerged, there was a weird, utopian belief that it would be the console anyone could play. Banana Blitz proves that it ain’t necessarily so. With the wrong implementation and poor instructions, even the simplest game can be ruined, and while Banana Blitz tries hard to make your task clear with illustrated (and animated) instructions before each game commences, some are a lot easier to grasp than others. 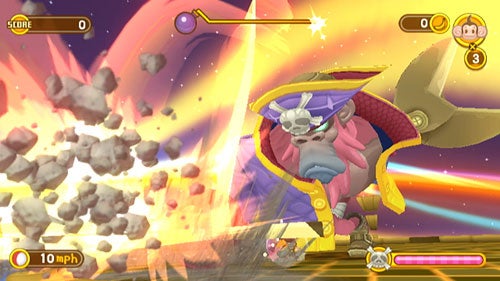 The spear-fishing game, for example, is a cinch: point remote at screen, jab at fish as instructed, job done. Snowboarding and Monkey Racing can be picked up in a minute: you just tilt the controller or use it in steering wheel fashion, respectively. However, other games are utterly bewildering. In Alien Attack – a basic 3D shoot-em-up – the controls are spectacularly unwieldy. In Frog-Ball they’re so bad that our test group gave up and let the time-counter run down rather than persevere any more. When Banana Blitz is bad, it’s very, very bad. 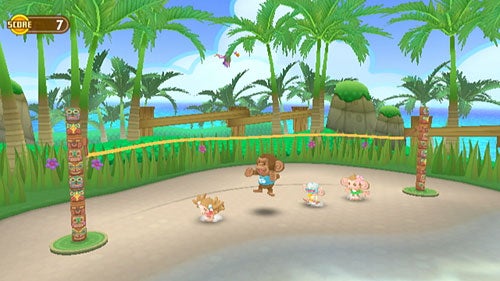 The games that most closely match real-world activities fare better, but even these have their ups and downs. Hammer Throwing is entertaining, and though it might have been even more so if you had had to physically spin with the Wii remote, it would probably have also been a lot more dangerous. Ring-tossing is fairly ingenious, and while Monkey Darts is low on accuracy, it is fun when you get the hang of it. However, bowling, golf and boxing have all been better handled in Wii Sports, while the likes of Whack-a-Mole are simply horrific, with the remote unable to deliver the accuracy and responsiveness the game demands. Perhaps even more depressing are the missed opportunities. Fencing is a frantic mess of two monkeys armed with just one thrust move and one parry, while Hang Gliding falls flat because the movement simply doesn’t seem to match your actions. Very disappointing. 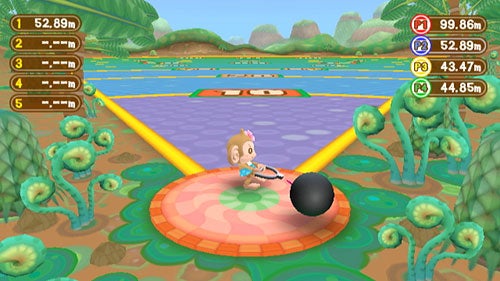 Let’s not go over-gloomy. There are some gems here – Monkey Racing and Monkey Target as always (though the latter takes getting used to), plus Monkey War (a rudimentary FPS, no less). However, there are also a lot of games here that are short on real content. I can’t imagine anyone coming back to the tightrope-walking, trombone-playing or blacksmithing games again and again. Overall you have to question the whole approach, partly because the best mini-games here aren’t explored to their full potential. Wouldn’t it have been better to prototype fifty ideas, discard thirty and work on the twenty good ones ‘til they shine? I’d rather have more courses for Monkey Racing or just more interesting courses for Monkey Snowboard than have seen Bug Balancing, Fruit Catching or Jigsaw. The result of all this is that multi-player Banana Blitz is best played in quickfire fashion, zipping through the games, laughing with the best and moving on quickly from the worst. It’s the gaming equivalent of a £5.99 Chinese buffet; don’t expect too much and a few of the dishes will pleasantly surprise you, but if you want real flavour, look elsewhere. 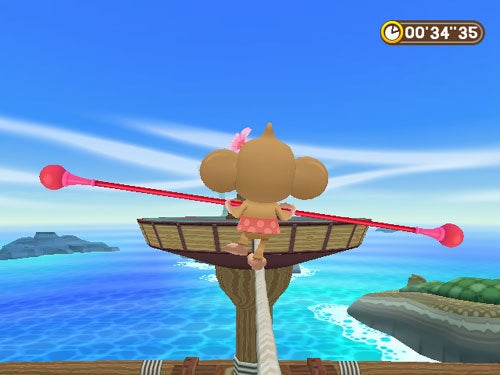 In short, this is the first Super Monkey Ball that hasn’t been elevated from good to must-have status by its mini-games (well, awful to just about sufferable status in the case of SMB Adventure). Fans of the series can buy safe in the knowledge that the single-player action is as compulsive as it ever was, but Banana Blitz leaves you feeling that the team spread itself too thin, and that overall quality has suffered as a result.


The most well-rounded and entertaining single-player Monkey Ball yet. If only the multi-player action was such consistently good fun.