One thing I always liked about the Super Monkey Ball series was that the titles pretty much summed up everything you needed to know about the game. You had a monkey, in a ball. He or she rolled from the start of the level to the end of the level, collecting bananas, and the results were, generally speaking, super. On the DS, Super Monkey Ball: Touch and Roll told you that it was basically the same thing, but you touched the screen to roll. Easy. 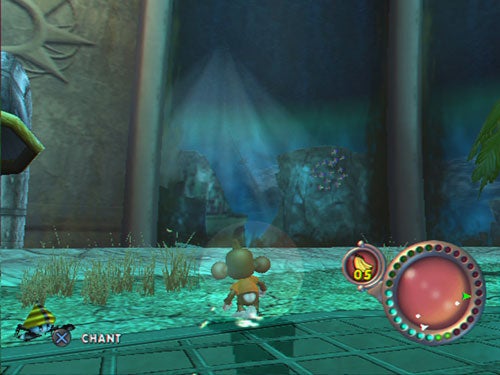 Following this logic, it’s not hard to see where Super Monkey Ball adventure is headed. This is essentially the core Super Monkey Ball mechanics broadened out for an ape-related adventure. In other words, it’s a 3D platform game with rolling, or – to hit the nail right on the head – a simian spin on Super Mario Sunshine. Those old simple stages have been thrown out in favour of a series of larger, more coherent monkey worlds, and the structure is broadly identical, with various areas to be explored, characters who offer you tasks to be performed, bananas to be collected and sections to be unlocked. For some people, this will be reason enough to despise the game – the last thing the world needs is another 3D platform game – but I disagree: good 3D platformers are now so few and far between that we could do with a decent example.


And at least Super Monkey Ball has always had one thing in its favour: simple, loopy charm. In this respect, Super Monkey Ball Adventure doesn’t disappoint. The graphics are as bright and beautiful as ever, full of the classic ‘blue sky’ Sega magic and boasting the sort of glossy sheen you would hope for. From the moment you set eyes on the lush greenery and blue waters of the opening Jungle Island, it’s clear that this should be a cut above the usual nonsense that appears every time a new CGI family film hits the streets, and that impression is only confirmed when you notice the surprising amount of detail in the architecture and background textures. 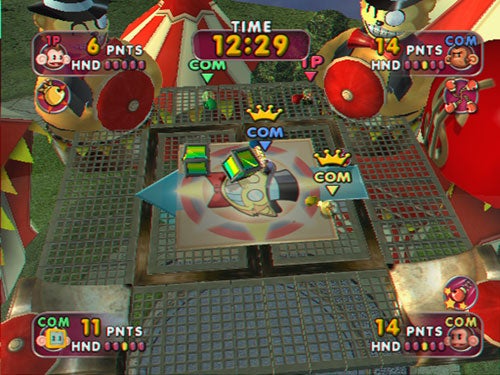 Admittedly, the storyline – think a hairy variation on Romeo and Juliet – feels prosaic after the bewildering nonsense of Super Monkey Ball 2, but at least Super Monkey Ball Adventures manages to find some weirdness in characters. Take the pretentious photographer, who keeps asking you to pose in his landscape shots, or the incompetent magician who needs your help to perform a monkey magic show.

What’s more, the worlds are mostly well staged and – if slightly generic – still more interesting and imaginative than the examples found in many kiddie-focused platformers. We’re not talking Mario/Sly Racoon/Ratchet and Clank good, but Zootopia, an out of control theme park, and Moonhaven, an industrial city, floating in the clouds, would not have shamed a latter-day Sonic game. Up to a point, the same even holds true of the tasks. Forget the usual ‘collect six of this then come back to me’ rubbish – on Jungle Island alone you’ll find yourself knocking down top-hatted monkey gents to find a lost toddler, flying out of a cannon to crack open incubating bird eggs, herding swarms of bees back to waiting hives, removing troublesome weeds from wells and waking snoozing soldiers with the aid of handily situated gongs. All, theoretically, fun stuff. 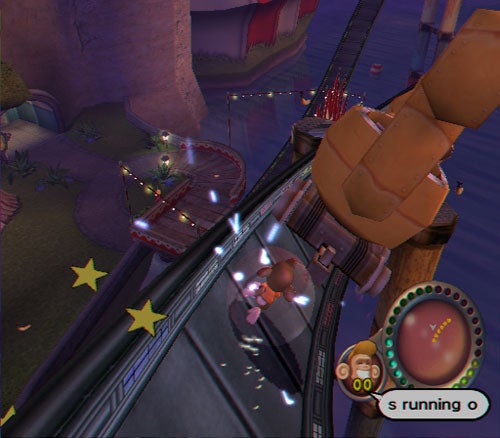 Of course, it takes more than rolling to make a great adventure, so Super Monkey Ball has ‘borrowed’ another great Nintendo idea with its chants: power-ups summoned Zelda-style by a sequence of presses on the D-Pad, and taught to you progressively throughout the game. The first adds a boxing glove to the ball, but before long you’ve mastered invisibility and a ‘sticky ball’ that enables you to scale certain surfaces, not to mention chants that instantly teleport between worlds.


The game even throws in some classic Monkey Ball action, with certain gates that have to be unlocked through the completion of puzzles – basically old-fashioned Monkey Ball stages with a start point at one end, a finish gate at the other, and a whole mess of ramps, curves, traps and miniscule walkways in-between. Although developed by Traveller’s Tales in the UK rather than Amusement Vision in Japan, these stages show a solid grasp of what made Monkey Ball tick: fast, demanding stages that put the emphasis on a cool head, fast thinking and precision control.

So why doesn’t Super Monkey Ball Adventure work? Well, it partly comes down to some utterly bewildering decisions. Firstly, Traveller’s Tales saw fit to include the ‘fallout’ mechanic that – in the original Super Monkey Ball – meant failing the stage if you fell off the world. In Super Monkey Ball Adventure, dropping into the sea or the empty sky means not only that you’re shifted back rapidly to the nearest restart point, which would be bad enough. It also means – more seriously – that you have to start your current task again from scratch. Factor in the fact that task objectives are frequently placed over water, or that a task might involve rolling around a roller-coaster which is built over the water, or that tasks involving cannons may well involve constant danger of losing speed and falling into the water, or that 90 per cent of the tasks in Moonhaven seem to involve rolling on wafer-thin platforms suspended above mid-air, and the results can be inordinately frustrating. 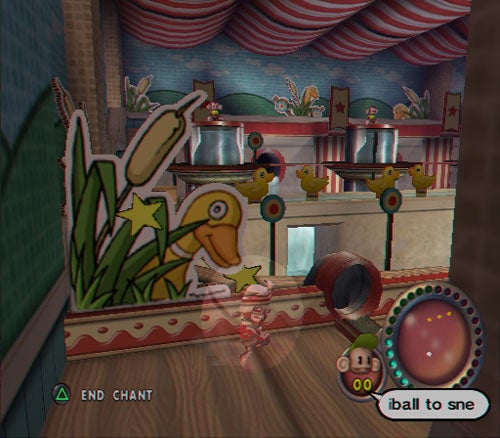 Early on, the aforementioned bee-herding mission requires collecting several swarms in a series of precision jumps, several of which put you at prime risk of a splashdown. Did nobody at Traveller’s Tales stop and think that, having collected four swarms, players might feel slightly miffed when a single mistake made while collecting the fifth meant you had to do the whole shebang again? It’s the sort of thing that puts you off a game when you’re less than an hour in.


Nor is it the only thing. For some bizarre reason, Traveller’s Tales decided to separate sections of each world with gates, which can only be opened by pushing a key lever ten – yes ten! – times around the clock in rotation. I suspect it might be some handy background data loading device, but the effect is to make you dread any such transition. You openly avoid moving between sections because you don’t want to waste a miserable two minutes of your life doing something so thoroughly unentertaining. 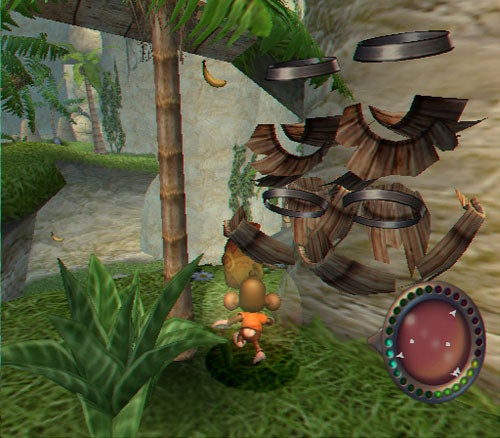 But above all else, Super Monkey Ball Adventure fails because the central game mechanic – a monkey, rolling in a ball – simply doesn’t work with the worlds and tasks involved. While there seems to be a little added friction between ball and surface, it’s still a frustratingly difficult business keeping the ball on track and moving in the right direction. You learn to fear any task that involves traversing difficult terrain in a set time limit, for the simple reason that you know that, under pressure, you’re almost certain to crumble and fallout, and so have to do the whole thing again.

If either the ball control had been better or the ramps and paths had been more forgiving – and the stupid fallout equals instant failure mechanic had been removed – then Super Monkey Ball Adventure could have been as genuinely lovable as a baby gorilla. As it is, it merely makes you angry, like a hungry chimp being taunted by a fat kid with a banana. 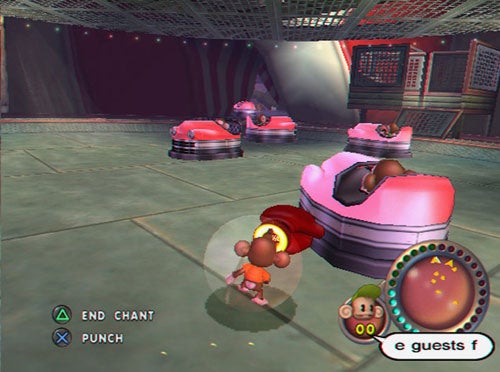 And while Travellers Tales deserves some kudos for producing a PSP version that so closely – if you’ll excuse the pun – apes its bigger console brother in the looks department, the shift from dual shock to analogue nub only makes matters worse – as do longer loading times and a slightly slower frame rate. If you want mobile Monkey Ball action, Touch and Roll is still by far the better bet.


I’d like to say that the party games make everything alright, but they don’t. Three of them, Monkey Race, Monkey Fight and Monkey Target, have already been done better in Super Monkey Ball 2 (and Super Monkey Ball Deluxe). Of the three new ones, Monkey Cannon is the best, with you frantically firing your chosen ape at enemy towers until yours is the only fortification standing. The others – Monkey Bounce and Monkey Tag – just aren’t all that exciting. 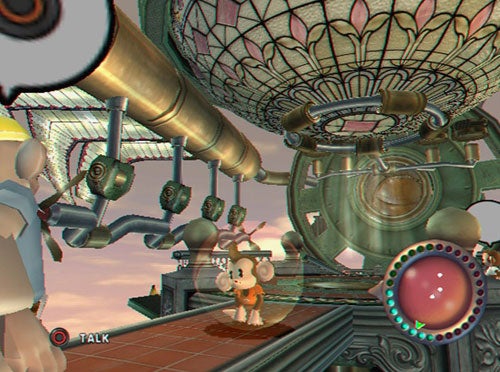 Overall, this is a major disappointment for the erstwhile Monkey Ball aficionado, and a game that’s hard to recommend to even the most desperate fan of platform games. It looks cute, but underneath the cuddly veneer it’s the cutesy platform Ninja Gaiden: a game so hardcore that it spits in the face of those without the utmost skill and dedication. In short, this time the title doesn’t really tell the story. It’s not much of an adventure, and it’s certainly not super. Which means that all that you’ve got left is a load of monkey balls.


What could have been the 3D platformer of the summer is destroyed by poor control mechanics and bizarre design decisions. Ultimately, high-rolling antics and precision platforming simply don’t make the best bedfellows.