For many gamers in the early 1990s, Super Bomberman was their first taste of multiplayer deathmatch. The frantic four-player Battle mode proved that if blasting one of your mates to smithereens was fun, then blowing up three of them was even more so.

The title became a staple of TV shows such as Gamesmaster, alongside other battle modes in the likes of Mario Kart. That period was easily peak-Bomberman, and the series has been dormant for the past few years since popping up as Bomberman Live and Bomberman Ultra on Xbox Live Arcade and PSN. So is it high time we had a revival?

Well, there couldn’t be a better platform for it. On the one hand, there’s some nostalgia for the cute little bomber among Nintendo fans of a certain age. On the other, Bomberman seems perfect for the kind of take anywhere, play anywhere, social gaming angle Nintendo appears to be pushing with Switch. Super Bomberman R even plays up to this, allowing four players on a single console, eight if you’re playing on the TV, eight using four Switch consoles on a local network, or up to eight players online.

The gameplay, meanwhile, is as simple and addictive as ever. Your little bomber guy or girl runs around a maze crammed with destructible blocks, dropping bombs that explode after a short delay. The bombs blow up the blocks or any other bombers within range – although only horizontally and vertically, and when the blast is unimpeded by an obstacle.

Your job is to become the last bomber standing, and to help you can grab a range of pick-ups that extend your bomb’s range, let you drop more bombs, improve your running speed, or enable you to pick up and throw your bombs around. With just one analogue stick and a single-action button to master, it’s effortless pick up and play. 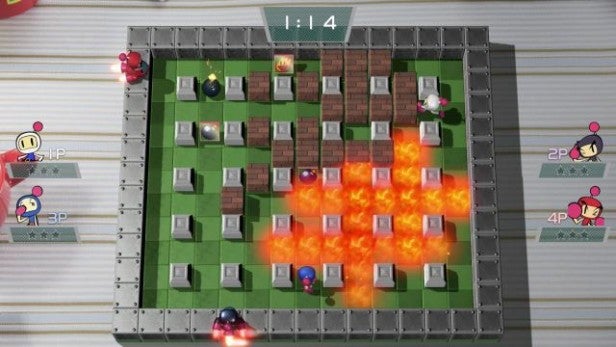 That doesn’t make it easy, however. Playing Bomberman successfully is all about speed, strategy and keeping a cool head, so you don’t get caught by the traps laid by other players – or, indeed, blunder into your own bombs. If you’ve never played before, or are out of practice, prepare to be pwned.

This is the first mainstream Bomberman not to be developed by the now defunct Hudson Soft, but the team at Konami and HexaDrive hasn’t really put a foot wrong.

The visuals have been updated to bring them into the modern era, but without losing their clarity or charm – although bigger explosions and a little more spectacle wouldn’t have gone amiss. The analogue stick isn’t as responsive as the old D-pad controls, but it’s something you get used to.

The action is fast, too. The only thing to gripe about is that if you use a CPU player to make up numbers, you’ll find them supernaturally gifted at avoiding traps and working out the exact range of every other player’s bombs. It’s all too clear that they have the exact data to work with in a way human players don’t.

And while I haven’t been able to play Switch vs Switch locally, I can confirm that Super Bomberman works well with two to four players on a single Switch or TV, and that the online multiplayer is easy to get into and seemingly lag-free.

There are leagues to work your way through, or you can stick to free battles. Only the small player base seems to hold it back, with the same names coming up time and time again as you battle. Playing Bomberman was fun in the 1990s and it remains so now, especially if you can round up some mates and chortle as they blunder into your waiting, soon-to-be detonating bombs.

Related: Common Nintendo Switch problems and how to fix them 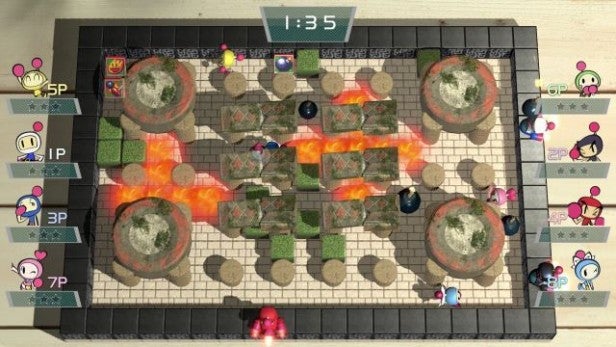 But Super Bomberman R has a problem. It’s still a pretty basic version of an old console classic that lacks extra modes or maps, yet Konami is charging a staggering £50 for it. At £10, I might say buy it. At £20, I’d still consider it. Anywhere north of that? Not on your Nelly. Super Bomberman R is overpriced, and that pricing is going to stop it from building an audience.

Konami’s justification is likely to be the inclusion of a single-player campaign. This isn’t bad, giving you a series of planets, each with eight stages culminating in a frankly tiresome two-stage boss battle – but it isn’t great, either.

The camera zooms in and out, occasionally excluding nearby threats from your view. Despite new ingredients added with each world – ice blocks, rescue stages, new contraptions to help or hinder you – the action grows repetitive. The cartoon cut-scenes are well-done but feature voices so infuriating that you’ll find the Skip option a blessed relief.

In short, it isn’t £30-£40 worth of bonus content. The fact that you have to earn coins to buy continues makes it actively annoying, especially when you could use those same coins to buy a limited selection of hats for your multiplayer bombers.

At £10-£20, Super Bomberman R would be the kind of fun, flexible party game that the Switch could do with so close to launch, but at the current price, it simply doesn’t offer enough to justify the outlay.