“So I ask you, my friend: if your life was the prize, would you kill the innocent? Would you sacrifice your humanity? We all make choices, but in the end, our choices make us.”

The above quote is taken from BioShock, but it could be used to describe the philosophy that sits at the heart of Sunless Sea. Like Irrational Games’s 2008 Steampunk shooter, Sunless Sea surround players with a dark, forbidding world filled with hostile terrors and then proceeds to fling a steady stream of moral conundrums at them. The player’s key motivation in Sunless Sea is, a lot of the time, basic survival and as they progress through the game’s dark and murky depths they’ll be continually faced with hard choices. Life or death choices, to be specific.

Sunless Sea is set in a world where the Steampunk sci-fi of BioShock collides with the horrors of the Cthulu Mythos. In its alternate historical timeline, Victorian London sank beneath the surface of England, obliterating the entire city, its Burroughs and its byways. The Big Smoke is gone, its remnants now surrounded by something its inhabitants call The Unterzee and the authorities of London are offering good coin to any seafaring folk willing to sail out into its unknowable expanse and report back on their findings. 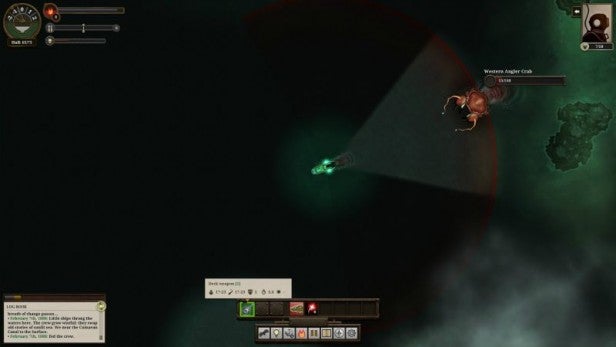 Along with this incentive, the player can select a personal quest to provide a backbone to the narrative, such as questing for the bones of their long last father. But really, the whys and wherefores that prompt the player to set sail in Sunless Sea are window dressing. What really draws them in, is what happens after they take to the water.

Players start out into the dark. No matter what coastlines they’ve discovered, what monsters you’ve encountered or what storylines have threaded their way through your existence, you always break new ground by starting out into the dark. It’s the only way forward.

The darkness in Sunless Sea is an all-encompassing, all-enveloping abyss. It’s both the most threatening prospect the player has to face and also their most necessary conquest. Stay at port and you may as well not bother playing Failbetter Games’s eerie top-down, as progression is entirely based on exploration. Venture forth into the Sunless Sea’s inky depths and your taking your life – and that of your crew, if you care about such things – into your own hands. Anything can happen out there in the dark and it usually does. 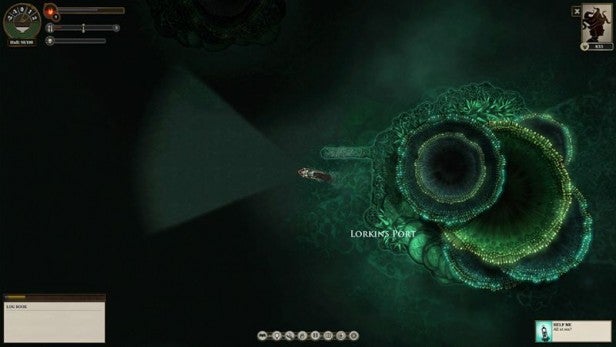 While at sea, players need to keep an eye on the resources they’re using to stay afloat – fuel for their boat, food for their crew – the general mood of their crew and the damage sustained by their boat’s hull. It’s worth taking a tentative pace in their initial explorations, because if they find themselves with no fuel and no food while adrift on the waters, they may find their only option for survival becomes cannibalism – which does absolutely nothing for ship morale.

On top of that, the Sunless Sea is exactly the most inviting or friendly place at the best of times; players will inevitably run into danger on their travels – be they in the form of pirate vessels, giant crabs, sharks or tentacle horrors that defy description. In these instances, they can use their vessel’s gun to kill any attackers, looting the debris for booty and food once they’ve done. However, if the creature or boat attacking them seems to be getting the better of them, the player can speed up and try to get away – at the cost of using more fuel. If they die, that’s it, there’s no respawning here – but they can choose to leave items, equipment and help to any characters the player chooses to start the game again with. Be warned, however, the Unterzee has the unnerving quality to change its layout on each play-through – no ports or islands remain in a fixed position once a game is over. 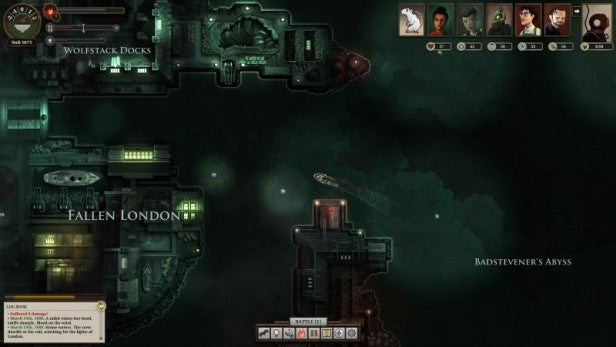 The ports dotted around the different islands in the Sunless Sea don’t guarantee respite. While some island inhabitants are friendly, there’s every chance the player may find their ship docking at an island filled with giant spiders. The only real safe haven is Fallen London, where they can lower their ‘Terror’ levels and re-stock their supplies and fix their ship, provided they have the necessary funds. Inevitably they’ll hear the call of the ocean once and, once more, head out into the dark.

So between their travails on the Sunless Sea, which are always packed fat with tension, and the brief release they feel returning to port, what could possibly entice players to fall for this game. Perhaps its biggest draw card is the sense that the player isn’t just a hapless victim of the game’s narrative, but the driving force behind it. Since choice and circumstance play huge roles in how each player’s adventure unfurls, no two players will experience the exact same story in Sunless Sea. While the narrative is revealed to the player in thousands of fragments of writing, as they progress through it, they can’t shake the feeling that every choice they make will have an effect on its overall outcome.

Verdict
Sunless Sea may take the form of a top-down nautical sim – albeit one that is gorgeously presented in atmospheric visuals and wrapped in an ominous soundtrack – but at its pitch black heart it’s a very personal horror story, unique to anyone brave enough to take to its waters.