Streets of Rage 4 is an enchanting retro surprise, bursting onto the scene and overcoming many of the justified grievances fans might have with reviving such an esteemed property. The combat is fierce, the music is banging and its sense of style is simply marvellous.

Reviving a classic is never easy. Franchises like Streets of Rage descend from a different era, a time where game mechanics and storytelling principles were far more straightforward and lacking in nuance. You walked forward, obliterating everyone in your path, occasionally stopping to eat a roast chicken off the ground before marching onward. PSA: Don’t eat chicken you find on the floor.

Simplicity aside, the core ideas of Streets of Rage have aged beautifully. After all, beating down thugs and saving an incredibly stylish city with a friend by your side is a task anyone can revel in, and the fourth instalment delivers such an experience with wondrous aplomb.

Dotemu has crafted a loud, neon-drenched love letter to the franchise that’s both proudly different and achingly faithful to its progenitors. It stumbles at times due to the sheer brevity of its campaign, but all the ingredients add up to make a beat-em-up dish well worth savouring. 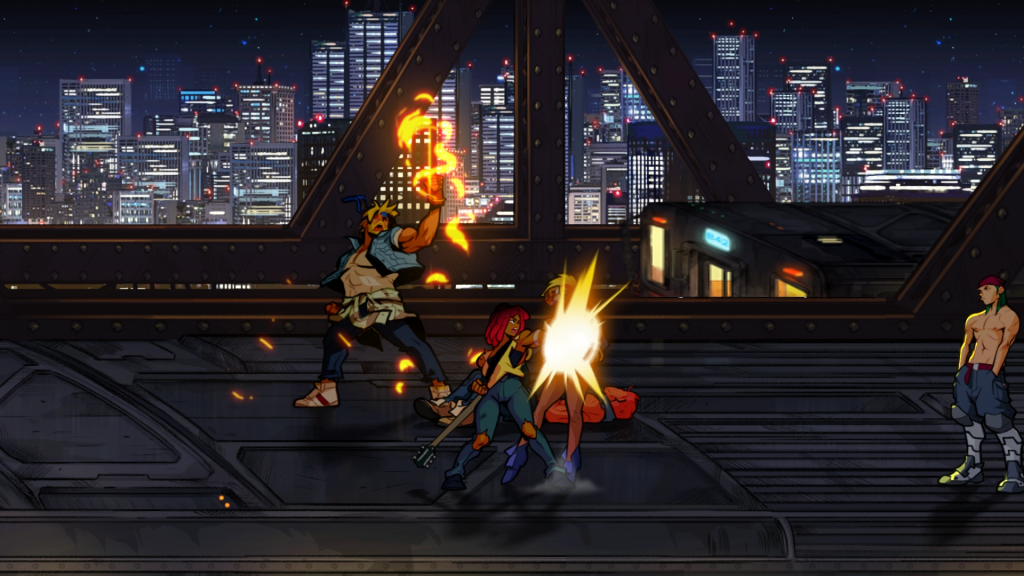 Streets of Rage 4 is a direct sequel to its predecessor, whisking the narrative forward ten years as the original heroes and a few newcomers work together in an effort to bring down a sinister dystopian organisation. Such a mission is achieved by beating the crap out of everyone, whether it be petty thugs, corrupt police officers or disco dancers hoping to strut their stuff on the city streets.

The premise is simple and executed with a phenomenal sense of style, maintaining the original trilogy’s stunning sense of style while arguably enhancing it with an aesthetic reminiscent of classic anime and Saturday morning cartoons. All characters move with a beautiful degree of grace, flying towards enemies in luscious bursts of light as they’re slamming into the ground.

Each playable fighter moves with varying levels of weight and speed, changing how you need to approach movesets to move through stages without taking massive amounts of damage. Veterans such as Axel Stone and Blaze Fielding return alongside the likes of Cherry; a young, confident musician who can freeze enemies where they stand by shredding her guitar.

They’re all enjoyable to control and offer enough difference in terms of combo variety that I felt justified in my multiple playthroughs. Axel is capable of juggling thugs with ease, while Blaze is in possession of an ultimate ability that can clear the field of enemies when trouble comes brewing. You’ll encounter plenty of unlockable characters too, including retro sprites from the original trilogy that somehow fit in perfectly against the modernised visuals. 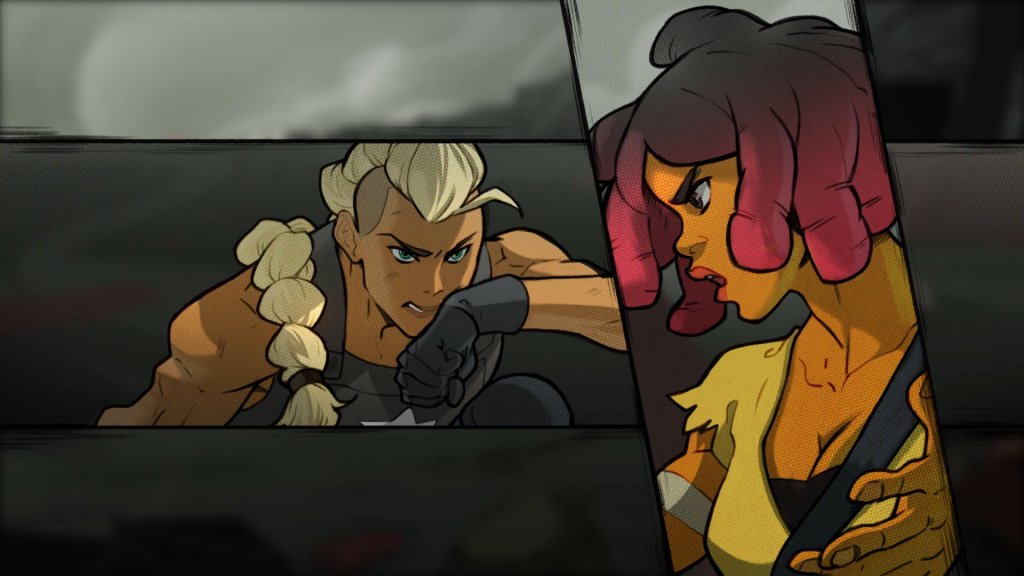 Streets of Rage 4 is very short, with the campaign’s dozen or so stages lasting only a couple of hours.  It maintains the arcade structure of its classic predecessors but is complemented by an ample amount of replay value. You’re encouraged to accumulate a constantly growing score in search of new playable characters and other secrets, all of which require multiple playthroughs to unlock.

Classic sprites harbour simpler controls and a modified soundtrack, adding an extra helping of challenging flair to proceedings. It’s a finely crafted love-letter to the franchise but isn’t afraid to flaunt its striking new vision while honouring the past. Stages range from corrupt city streets to underground sewers awash with Teenage Mutant Ninja Turtle references.

You’ll even do battle atop a moving train, jumping in a rhythmic fashion to dodge incoming obstacles. It’s unfortunate that the full range of stage designs don’t lend themselves to more varied gameplay mechanics. The majority of encounters are rather basic, with boss battles occasionally forcing you to learn move patterns and avoid highly telegraphed attacks. It’s retro to a fault but is thankfully saved by how much fun it is to play. 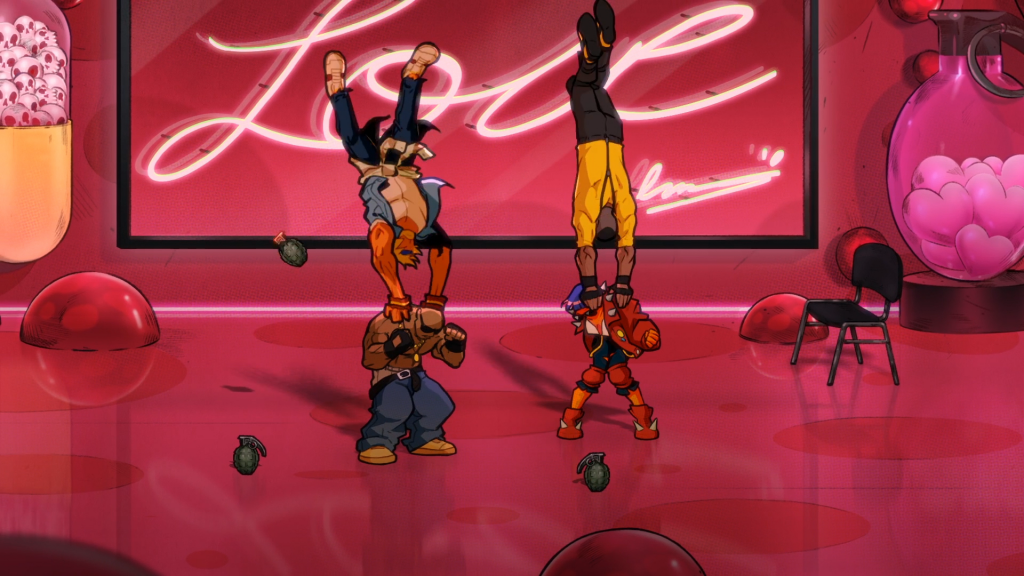 Combat is enhanced by special abilities possessed by each character. Using them drains a small amount of your health, but if you manage to execute a combo immediately after activation, you stand a chance to gain that lost life back. It’s an idea that incentivises aggression and building upon combos, encouraging you to learn the act of juggling and dodging in a way that few beat-em-ups can muster.

Be careful you aren’t overly generous, though, as death comes swiftly to those who don’t ration out their unique skills. These abilities are often used to force foes into the air or clear them towards the edges of the screen, providing our heroes room to breathe when things get messy. Combine this with the basic foundations of combat, and you’ve got a fascinating dynamic that maintains the desired simplicity while working in just enough depth to keep you engaged for extended play sessions.

It’s an added bonus that Streets of Rage 4 is positively gorgeous, boasting a luscious hand-drawn art style that echoes the arcade classics perfectly. Many of the designs are the same but have been reimagined in a way that looks truly fantastic. I haven’t played them in years, but iconic costumes and levels immediately jumped out, transporting me back to arcade cabinets long left behind.

Returning to a franchise like this always warrants trepidation, but Dotemu has passed the test with flying colours. I’d love to see Dotemu introduce some downloadable content in the form of new stages and side stories, since some of the new characters deserve a bigger spotlight, with larger than life scenarios teased but never touched upon in Streets of Rage 4. A lack of voice acting in cutscenes also feels like a strange absence, especially given how much personality everything else has. 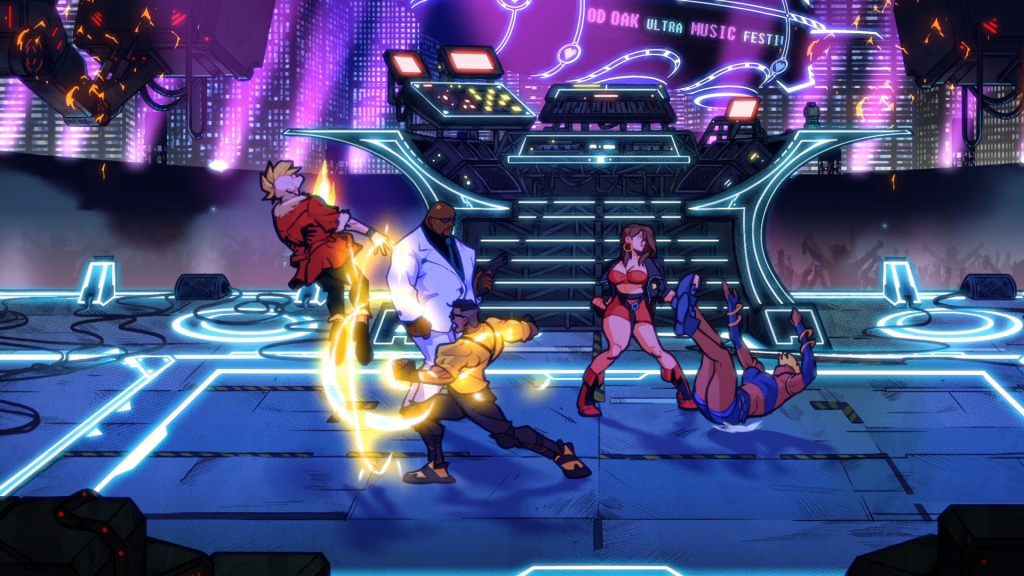 Hardcore completionists will be pleased to see Arcade and Boss Rush modes included, the former tasking you with completing the entire campaign with a single credit. If you’re downed, it’s straight back to the beginning. I imagine this is a gauntlet best tackled with a friend of equal skill since you’ll need to effortlessly support one another to emerge unscathed. If I’m brutally honest, it’s way above my personal capabilities. I’d rather look at the lovely visuals and beat folks to a pulp on normal.

Streets of Rage 4 is an enchanting retro surprise, bursting onto the scene and overcoming many of the justified grievances fans might have with reviving such an esteemed property. The combat is fierce, the music is banging, and its sense of style is simply marvellous.

While I have my criticisms with the brief campaign and simple mechanics, they’re easy flaws to forgive in the grand scheme of things. In the world of modern brawlers, this stands alongside River City Girls as yet another essential outing.