There’s been a rash of four-player cooperative shooters recently, as a generation of designers and gamers that grew up playing Valve’s seminal shooter Left 4 Dead are looking for ways that formula can be remixed.

In the case of Strange Brigade, the formula has been tweaked to play to developer Rebellion’s strengths. It’s a third-person shooter that sees four players team up for a pulp adventure replete with somewhat mindless blasting, derring-do and a big dollop of style.

At first, Strange Brigade grates with its clunkiness. On occasion characters won’t catch the ledge right for a vault, or the camera could pitch and turn wildly at the slightest twitch – at least when playing with a mouse and keyboard. When you start the game, the selection of weaponry is uninspiring, and a couple of levels play out without too much of interest or challenge taking place. 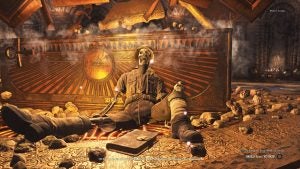 It’s crucial to mention this up-front. When you initially play Strange Brigade, it’s easy to be underwhelmed. Stick with it for an hour or two, however, and the game begins to unfold beneath you. It allows you to get your teeth into the game’s progression system, ramping up the challenge and letting you take a look at some more interesting settings.

The game’s progression system allows players to bank any gold they don’t spend in a mission to buy new weapons. You get gold from chests in the game and kills, and there are few things to purchase in-mission, so you’ll finish each with a decent wodge of cash to spend on things that go bang.

Of the four characters you can play as – with a fifth coming free for all early adopters, but not present in our review build – each has their own strengths.

Frank Fairburne, an ancestor of Sniper Elite’s protagonist Karl Fairburne, was an immediate favourite as Frank does additional damage on headshots. This meant I was largely buying single-shot rifles that would hit enemies like a medium-sized truck.

Each character also has unique abilities, and finding a set of the hidden collectibles known as relics allows characters to buy new special abilities. Another character can unlock the ability to turn enemies into chickens, while dear old Frank merely gained the ability to automatically hit every enemy in sight with a damaging pistol headshot.

These relics are one of several collectibles and hidden objects tucked away in each level. Puzzles litter the levels, and they’re unforgiving, offering little to no information about how to solve them. Often you’re given only a couple of attempts at solving these puzzles before they lock you out.

Sussing them out usually involves looking around at the surrounding environment for clues and experimenting – but if you mess it up then there’s always the next playthrough to have another go.

Solve one of these puzzles and you’ll get a reward. This will often be in the form of gold or a collectible. The latter could be a relic, comic book or one of the many other items littered throughout the place.

Sometimes, however, you could get lucky and pick up one of several gems to upgrade your weapon. You often have one or two slots for a weapon at maximum, so choosing whether it’s more important to have rounds that pierce armour or rounds that heal you ever so slightly is an important choice. 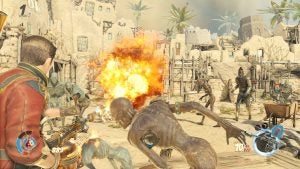 All these systems help to add to the long-term appeal of Strange Brigade; it’s only a shame they kick in after a few hours of play.

Combat is relatively simple at first, with uninspiring weapons and a lack of challenging enemies. Players are introduced to the weird and wonderful cast of beasties in a series of cut-scenes, but it will be a couple of levels in that you’ll encounter a monster that brings challenge instead of sheer numbers. When you’re twiddling your thumbs plinking at a crowd of zombies, the flaws in the game become more apparent.

Further upsets come from the game’s characterisation. There are four characters, and while three of them are largely inoffensive, the fourth, a Maasai warrior named Nalangu Rushida, is cringy. She’s barely dressed, instead being covered in bodypaint. While it fits the pulp styling of the game, the stereotypical implementation here feels a little clunky, perhaps.

To test out the multiplayer, several Trusted Reviews staffers hopped in to play with me for an extended session. Strange Brigade is absolutely a game that shines in multiplayer, where the characters’ different abilities and play styles can be combined in interesting ways to turn the tide of battles. The hairier things become, the more interesting it is to dig in and survive.

The maps are littered with traps, triggered by shooting large glowing areas, which can collapse cliffs, unleash large swinging axes, or even just start a whirling blade that can chop up enemies in an instant. While these work in single player, with a group of players you can collaborate to bait enemies into position to be dispatched by these traps. 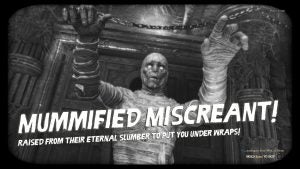 All of the game’s content, whether it’s the narrative campaign, Horde mode or even the Score Attack mode, lacks some bite in single player. It’s firmly my opinion that if you want to play this game then you should look to rope in some friends for the ride. It’s hands-down a better game with company.

One niggle with multiplayer is that loot isn’t shared. Gems, gold and anything else is collected only by the person that grabs it first. A fairer system would be to award loot to everyone, or to dish it out in a round-robin system at the end of the mission, to ensure everyone has a fair share of the goodies.

Scoring Strange Brigade was a tough proposition. When the game works and you’re in the thick of combat with friends fighting alongside you, it sings. However, there are moments when it doesn’t quite come together, and the adventuring feels like an asinine dawdle through a variety of pretty locations. However, it’s key to state that these are incredibly pretty locations.

Nevertheless, Strange Brigade represents a bold new opportunity for Rebellion. There’s enough charm here to paper over some of the game’s fairly substantial cracks, and it’s easily one of the more unique and better cooperative shooters that owe Valve a fruit basket for Left 4 Dead.

To rip off the overly excited announcer that spends the game bellowing exposition in his best radio voice: “let’s hope we haven’t seen the last of the Strange Brigade!”