Proof that battery power is really coming of age: the Stihl MSA 120C is a 36v battery-powered chainsaw designed for domestic use. From managing trees in a large garden to cutting up timber for firewood, the Stihl MSA 120C is the perfect garden accessory and its low operating noise means it won't annoy your neighbours either.

Thanks to the improvement in battery-powered tools, we’re now at the point where a chainsaw is a real option for home users. Thanks to its quieter running and easier operation, the Stihl MSA 120C makes light work for those with big gardens, or for those wanting to cut up logs to use as fuel in a wood fire.

Excellent performance, plenty of safety features, and the same build quality that you’d expect on Stihl’s professional equipment makes the MSA 120C a serious tool for those who need it.

Battery-powered it may be, but the Stihl MSA 120C is a full-on chainsaw, looking and acting the part. Decked out in Stihl’s familiar white and orange colour combo, this chainsaw sports a similar look to the company’s professional range.

This model is designed for home use, so has a 30cm (12-inch) guide bar and ¼-inch chain gauge, designed for medium-sized timber. As with professional models, the chain is exposed on the Stihl MSA 120C, which means that you’ll need full-on protective equipment to use it: chainsaw trousers, protective footwear, gloves, and eye protection. Ear protection isn’t strictly needed for this model, since the electric motor is comparatively quiet. 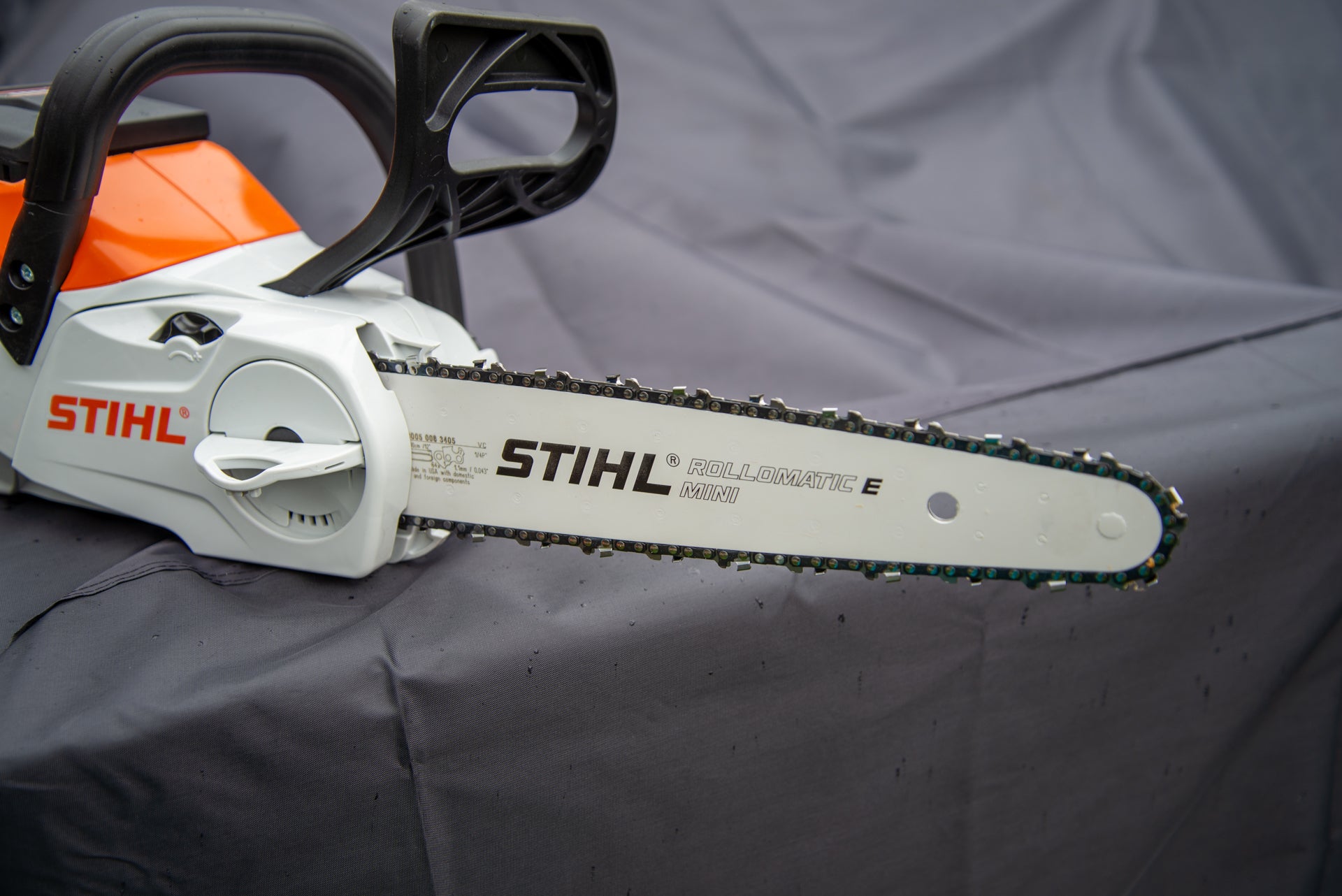 This is a full-on chainsaw, only it’s battery powered

Safety is a big issue with chainsaws, so it’s reassuring to see that Stihl has provided several features to prevent the saw from being started before you’re ready. First, the battery slot at the rear has two positions. When you first slide in a battery, it clips into place but doesn’t make contact. As such, the chainsaw is effectively dead; a second push gets the electrical system up and running.

At the front of the saw is a large plastic handle that has to be pulled up to get the Stihl MSA 120C ready for action. Thereafter, you have to press the thumb button and trigger to start the saw. It should mean no accidents, but there’s also a plastic sheath for that extra layer of security. 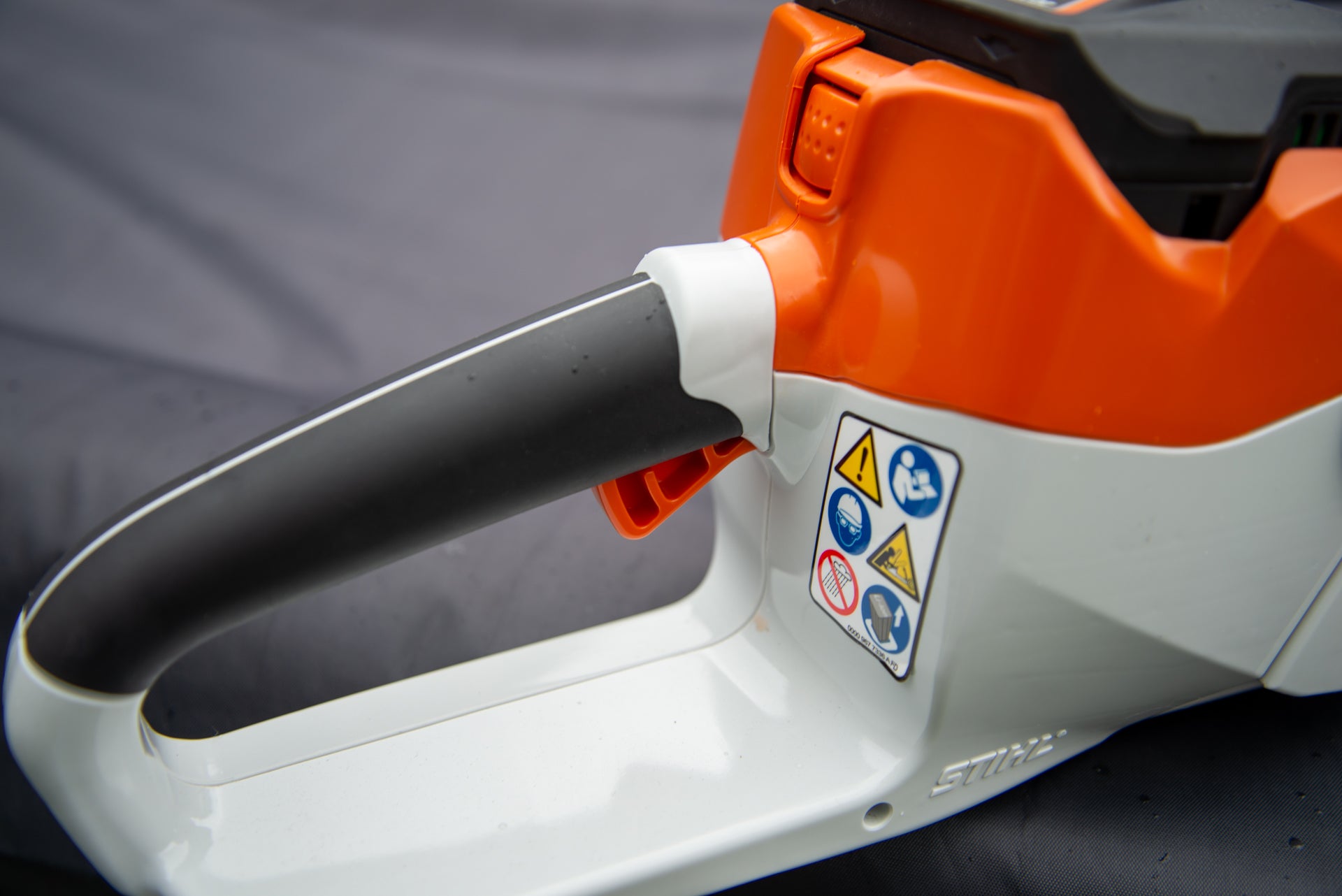 As with other chainsaws, some maintenance tasks will need to be performed. First, you need the chain to have enough tension; it’s a tool-less job. Once the sprocket cover has been loosened using the screw on the side, you can tighten or loosen the chain using the dial. It’s a touch fiddly to get right, so maybe have a dealer talk you through the process. 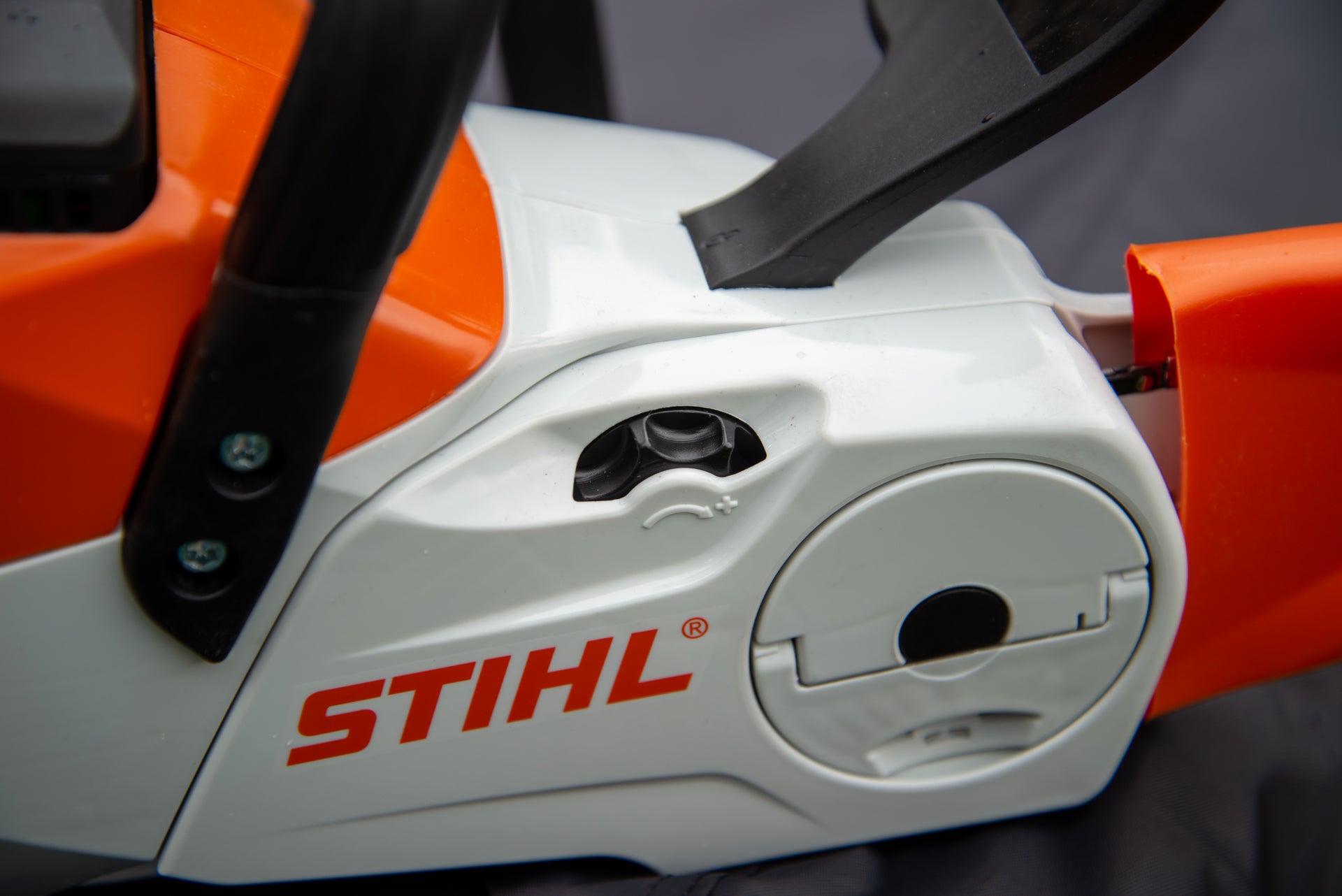 Chain tensioning is achieved via a tool-less system

You’ll also need to top up the oil reservoir. I found the best time to do this was on depletion of a battery, to avoid forgetting. For cleaning, you can take the sprocket cover off, to give the chainsaw a thorough clean after use. 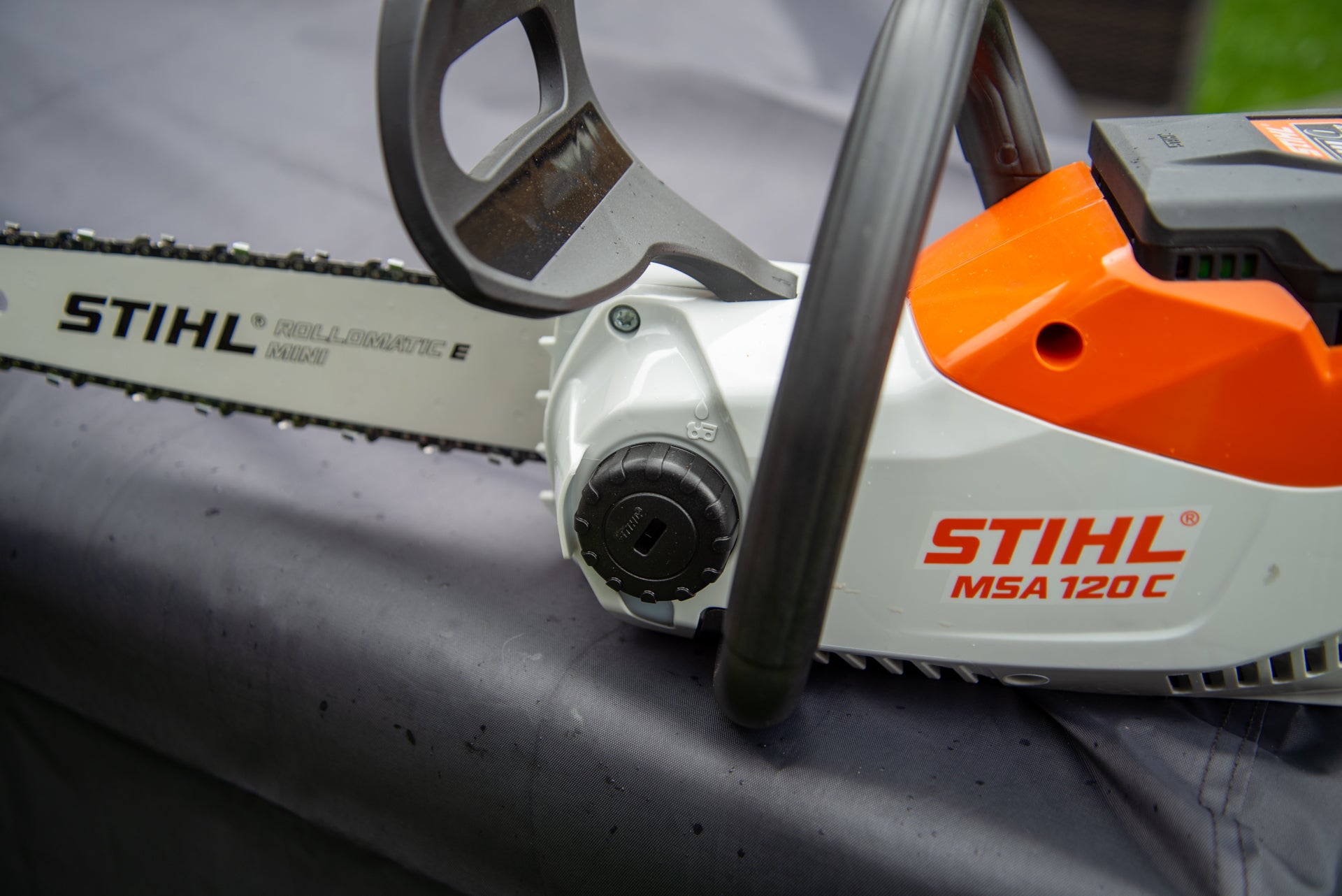 You need to keep the saw topped up with oil

You’ll need to have the chain sharpened from time-to-time; this is a job that’s better suited to a dealer, as it can be fiddly and difficult to get right.

The main difference between this model and the petrol model is that you have to use batteries for power. You get an AK 20 model in the box, but larger capacity batteries are available for a longer run-time; you can get faster chargers, too, if you want a quicker turnaround time between outings.

Performance – Easy to handle and perfect for most domestic tasks

With its 3.7kg weight (including battery), the Stihl MSA 120C is surprisingly easy to wield – which makes it all the more important to ensure you wear the right safety gear to prevent any accidents. With the bundled AK 20 battery, you should get up to 35 minutes of run-time, although the type of wood that you’re cutting can make a difference. Upgrade to the AK30 battery and you’ll get closer to 55 minutes.

If you’re a regular user, then upgrading the charger might make sense, too. Using the bundled AL101 charger, 100% charge of the AK 20 battery takes 180 minutes; with an AL 300 charger, full charge is 55 minutes away, and 80% charge is achieved in 35 minutes. There’s a handy battery gauge on the rear of each battery: press the button to light up the four LEDs (each one represents 25% charge). 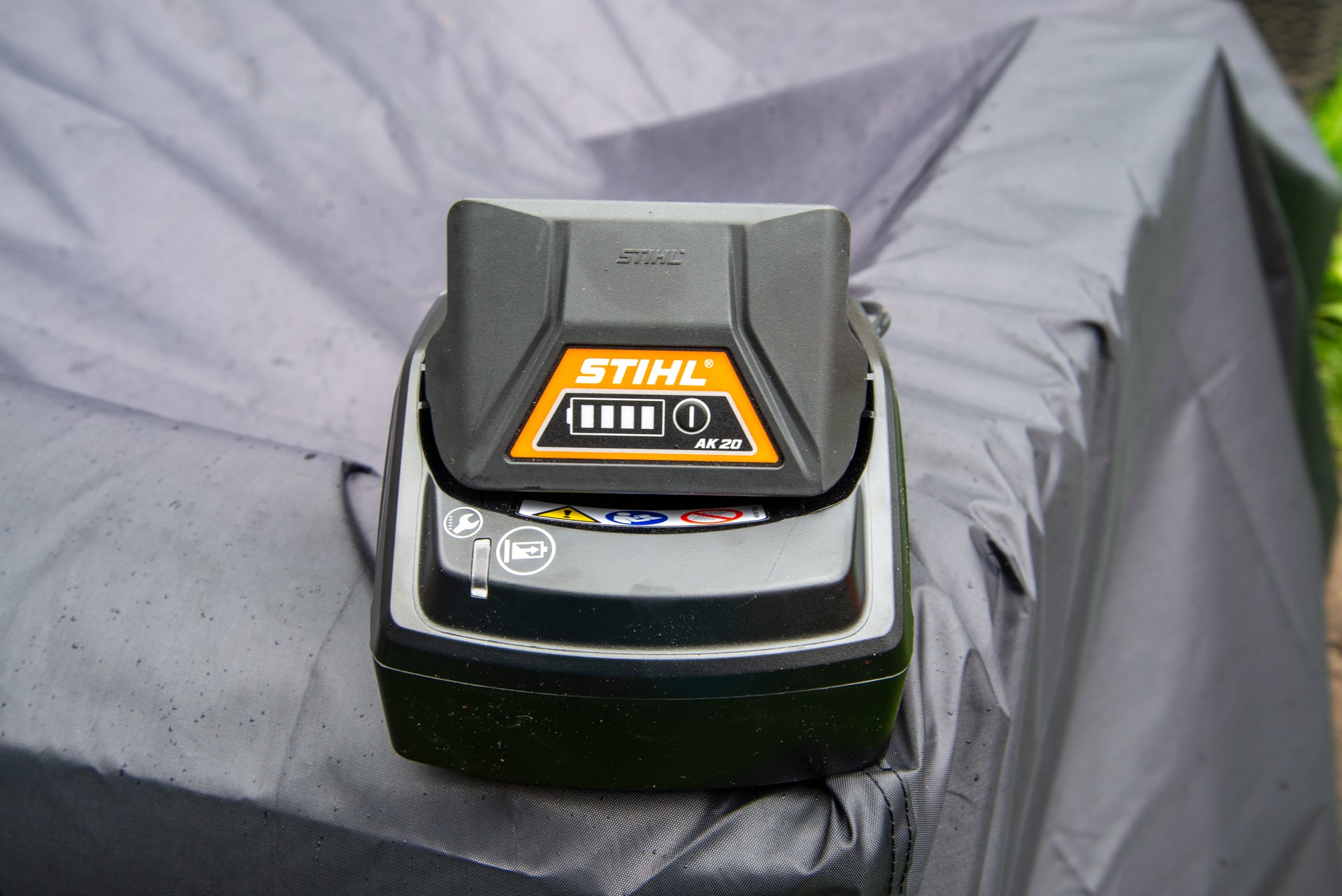 The bundled charger is quite slow, but you can buy faster models

Putting the Stihl MSA 120C into action, I was impressed with its cutting power. Although this chainsaw is really for pruning back branches and cutting up smaller logs for a fire, I decided to push it to its limit and started with a large log of 25cm in diameter, which required a bit of patience to cut through. Using too much pressure or trying to go too fast will jam the saw; go slow and methodically and the Stihl MSA 120C can manage it. However, this size of log did feel as though it was at the limit of what the MSA 120C can handle, which is impressive given the price and size of this saw. 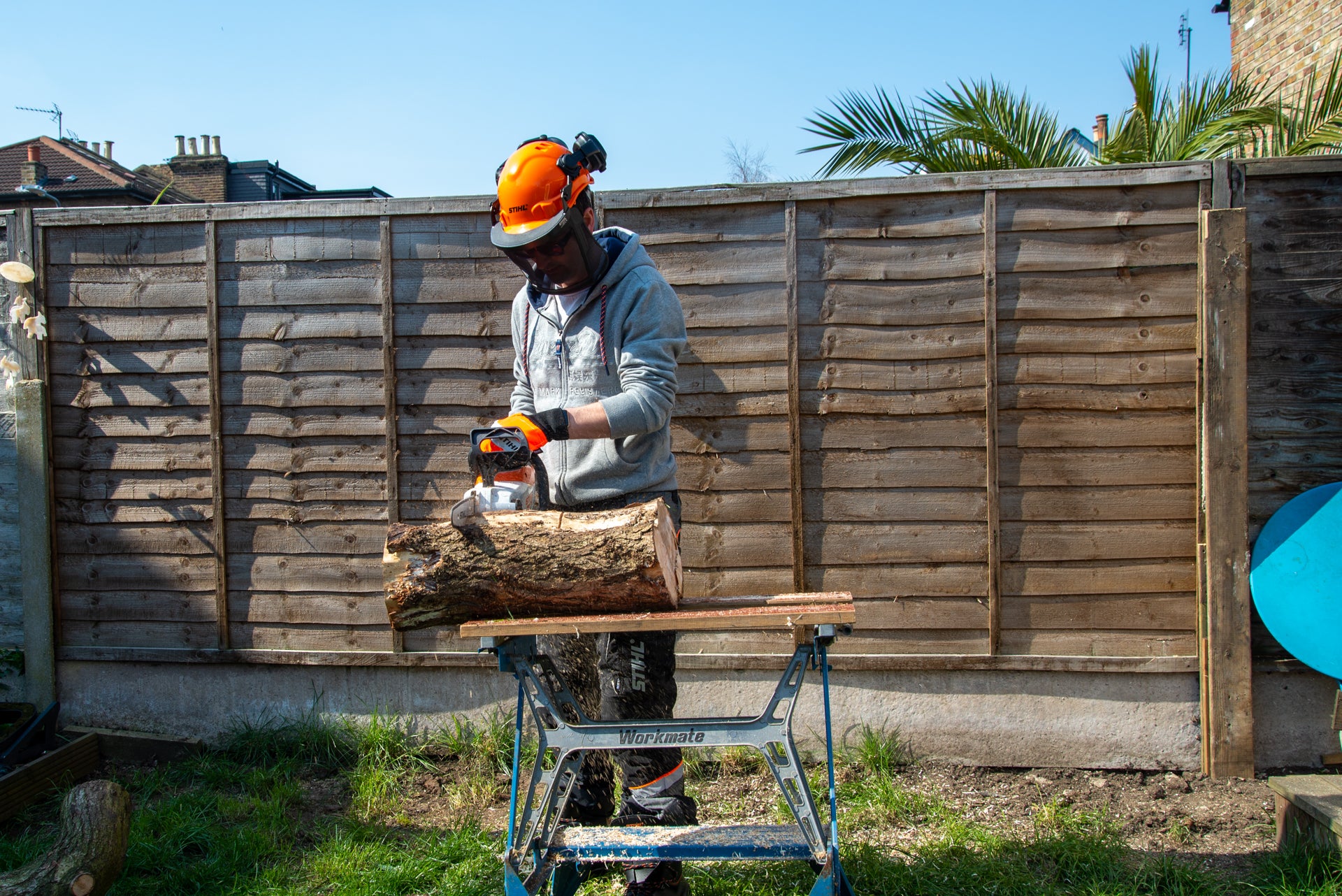 You can cut larger logs, but this is about as big as you can go

Switching down to something smaller that you’d more reasonably have to deal with in your garden or for cutting up fro the fire, I used logs with a 15cm diameter. Here, the Stihl MSA 120C cut through straight away, giving me some a nice bundle of logs to season for firewood. Impressively, the Stihl MSA 120C doesn’t pull too much, even though it has a decent amount of power to it. That makes it less overwhelming to use, particularly for chainsaw newbies.

Realistically, given the two sizes of log that I cut, the chainsaw can cope with the vast majority of domestic needs easily enough, and you’d only need something more powerful (or a professional) for dealing with lots of harder wood or very big trees. Slightly smaller logs are easy for the chainsaw to tackle

Thanks to the electric motor, the chainsaw is rated at just 83dB(A), which is somewhere just under city traffic and a lot quieter than a petrol chainsaw. Again, for domestic use, the comparatively low noise levels are great, as you can use the chainsaw in the garden without upsetting the neighbours.

To see what a professional thought of it, I handed it over to Joe Lovell of Gardencare Tree Services. He found that cutting softer woods was problem-free, but Joe felt that the chainsaw could struggle a little on tougher woods, such as apple. However, he said that for domestic use and for cutting up smaller logs for firewood that this is the perfect tool. Joe’s only minor complaint was that he felt that it was a bit fiddly to adjust the chain and recommended that buyers get a dealer to take them through the process.

Should you buy the Stihl MSA 120C?

For bigger jobs around the garden that need a chainsaw or for cutting up smaller logs for firewood, the Stihl MSA 120C is an excellent choice. It’s lightweight, powerful and comparatively quiet thanks to its battery operation. With plenty of safety features and a more gentle operation than its bigger brothers, it’s a useful tool that’s easy to use on thick and thin logs alike.