Although comparatively small, the Stihl iMow RMI 422 PC is capable of managing lawns up to 1700m2. It's a powerful performer, coping with some difficult terrain and steep slopes, cutting the grass finely. Only winter months and lots of rain caused the wheels to clog – but even then, there was only slight impact on its climbing ability. This really is the best robot lawn mower for mid-sized lawns.

Compact, nippy and quiet, the Stihl iMow RMI 422 PC robot mower handles deceptively large lawns (over a third of an acre) for its size, and its algorithm-based dynamic mowing pattern promises an even, all-over cut.

On-board controls are easy to use and the accompanying app more accessible still; it will even send alerts to your mobile device should it run into a problem.

A star performer despite giving it the toughest lawn challenges, the iMow is thoroughly impressive; it stumbled as a result of mud-clogged wheels only on super-steep slopes late in the season. Throughout the summer months, it won’t fail to impress with its low-maintenance, quiet running and very effective cut.

The Stihl iMow RMI 422 PC is about as compact as you’re going to get from a robot lawn mower that claims to handle over a third of an acre. The docking station is neat and tidy, even if the bright orange and grey livery isn’t exactly “camo” in the garden. Despite its small size, this is a fully featured mower with an adapting algorithm-based mowing pattern, intelligent navigation and fully connected smarts. It can be set up and controlled via the crisp LCD control panel under its cover flap, or via the very easy and fun to use iMow app. Using GPS location, it feeds back lawn size information that underpins Stihl’s clever dynamic mowing system. In combination with a traditional perimeter wire boundary, this works out where the lawn needs mowing and when, within the mowing time set as its working hours.

Those hours are more flexible than most gardeners, too, with night mowing no less effective than daylight operation. The app offers heaps of performance data and keeps you updated on parameters such as battery usage, mowing status and schedules. Using 2G GSM connection (to either Vodafone or EE networks with subscription included in the price) the mower will feedback data, alerts and warnings to the app, which can in turn ping alerts to other smart devices. Having the iMow ping my Garmin watch to tell me it was giving up due to rain – while I was in the pub – was a tech highlight of the summer.

If you prefer to use the control panel on the machine, then you’ll be pleased to learn that it is well laid out, logical and protected from the elements by a plastic cover. The six-button complement works with the display and menus well, and we didn’t experience any issues seeing the screen in bright sunlight. This control panel can be removed for security, although that would disable the machine’s theft alarm should it be moved outside the perimeter wire. 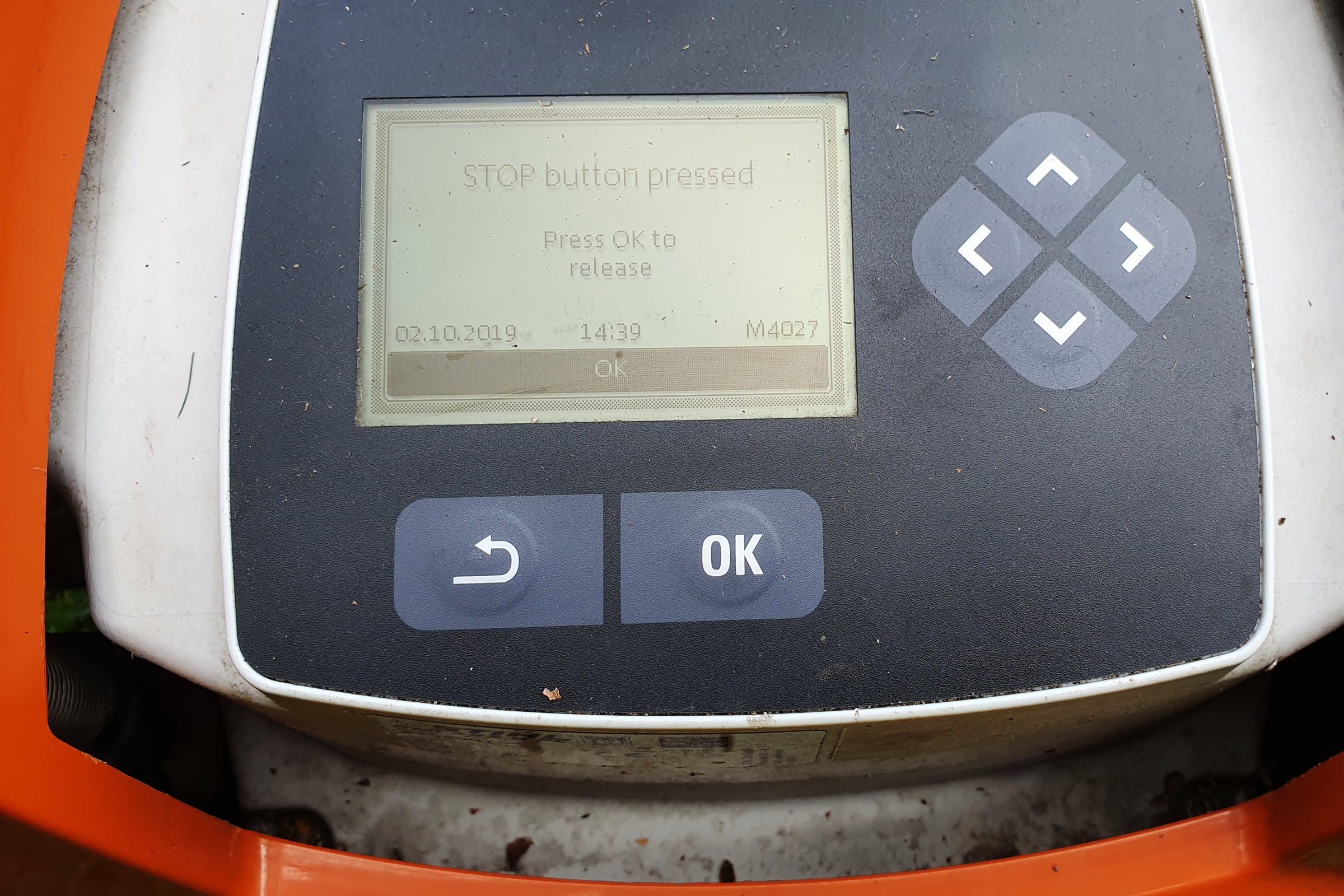 The control panel can be removed for safety

The iMow operates using a single mulching bar blade that can be removed without tools for replacement or sharpening. The machine has manual cutting-height adjustment via a large knob on its top, which feels slightly incongruous when the iMow has smart and automated controls for everything else. The height range is relatively narrow, too, from 20mm bowling green to a 60mm mid-cut. 50-60mm is about as low as we go on the main field to slow the grass from browning in the summer, but that should be fine on more normal lawns and flatter ground than our field. 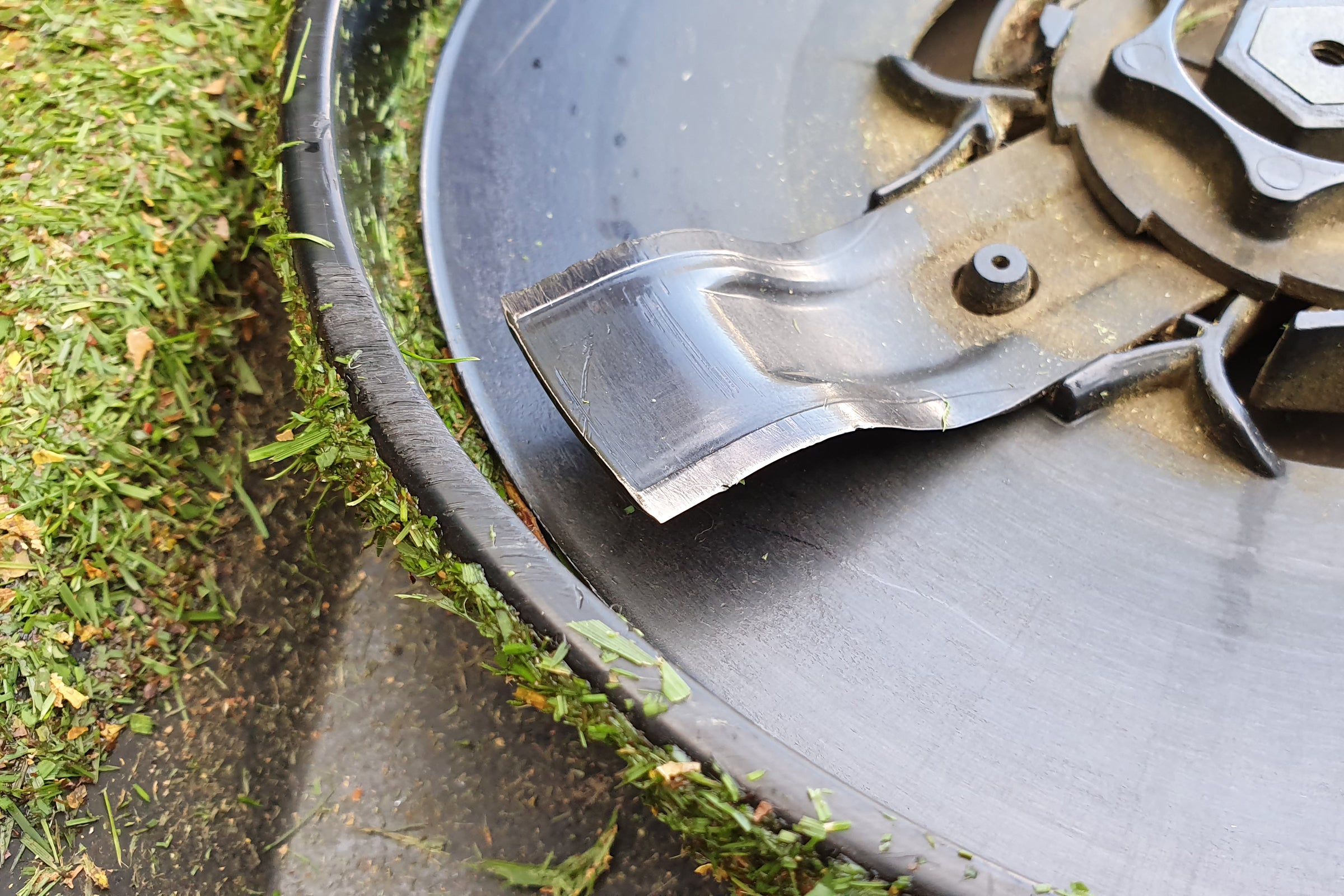 Our professional install by a Stihl representative was almost essential given the complex 800sqm of lawn we’d planned for the iMow to work on. The area encompassed flower beds, steep slopes, trees and bushes, rabbit holes, and a boggy area under trees.

The app is exceptionally good, offering a great raft of data on tap as well as all of its programming functionality. It’s PIN code protected from interference, and you can set boundary alerts to ping your smart device should it be removed from the area. The iMow’s on-board GPS produces accurate path-mapping data with satellite or terrain overlay, which allow it to be located should it become stuck, get removed from the mowing area, or simply go feral. (That didn’t happen on the test, just to be clear). 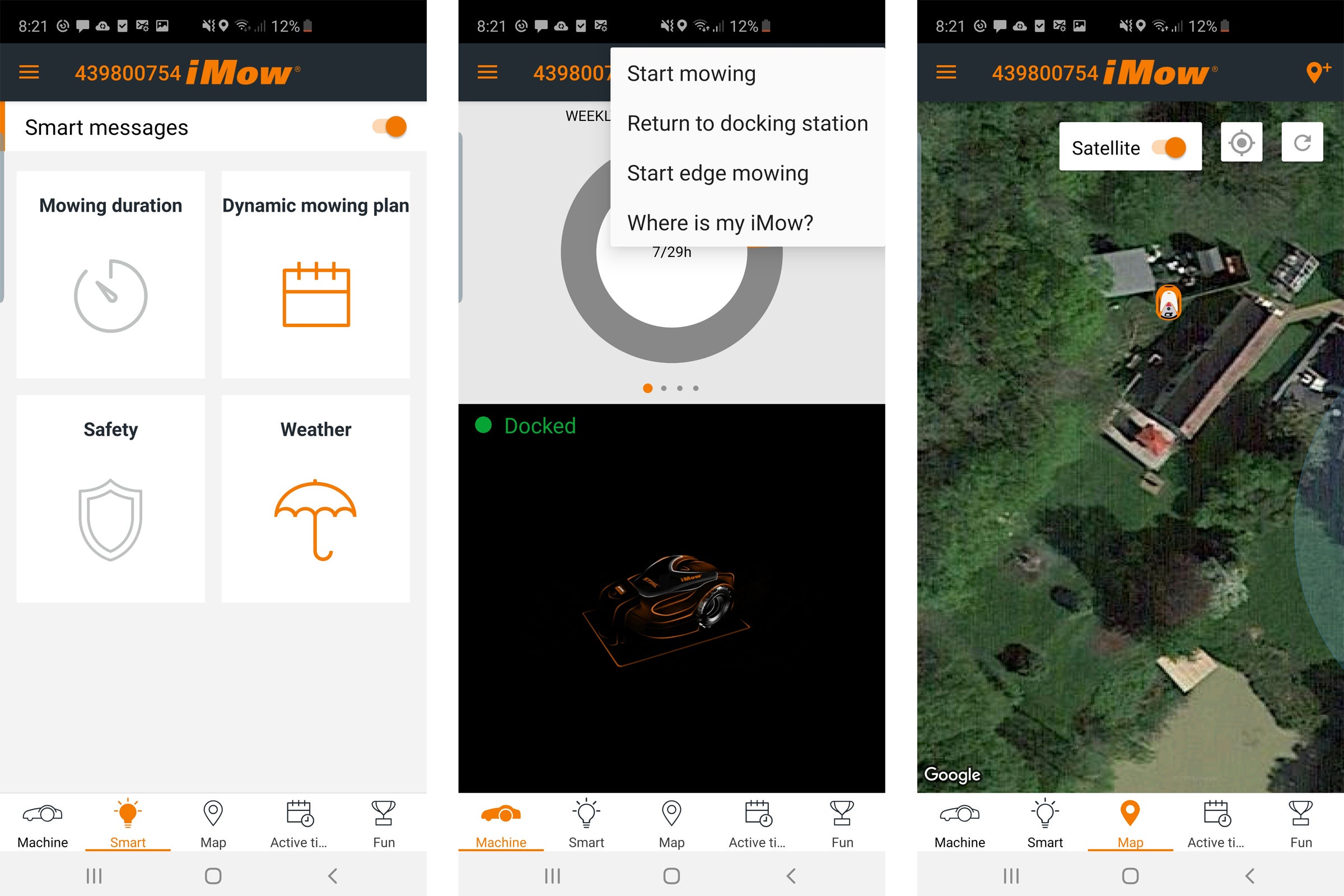 The app is fantastically easy to use, letting you tweak the lawn mower’s settings to get the best results

One neat touch is the iMOW’s offset drive home. While most robot mowers will find the docking station by tracking the perimeter wire or guide wires straight back to the down. Over time, the constant path of the mower returning to home via the same path can cause trails in the grass, and we have seen this effect with some mowers within a month. The iMow avoids this by alternating its offset from the guidewire each time it returns home, ensuring it doesn’t keep following exactly the same path.

Performance – Handles the most difficult of terrain with ease

The initial setup of just 25 hours per week working time proved too little for the compact orange mower on our fast-growing lawn; there were some missed areas after the first week. We upped the hours per week to 35. This had an immediately positive effect, albeit with a couple of minor exceptions on the corner of one wooden flower bed. Settling on a 40-hour week kept the grass looking super-trim all-over and resulted in fine mulch too. 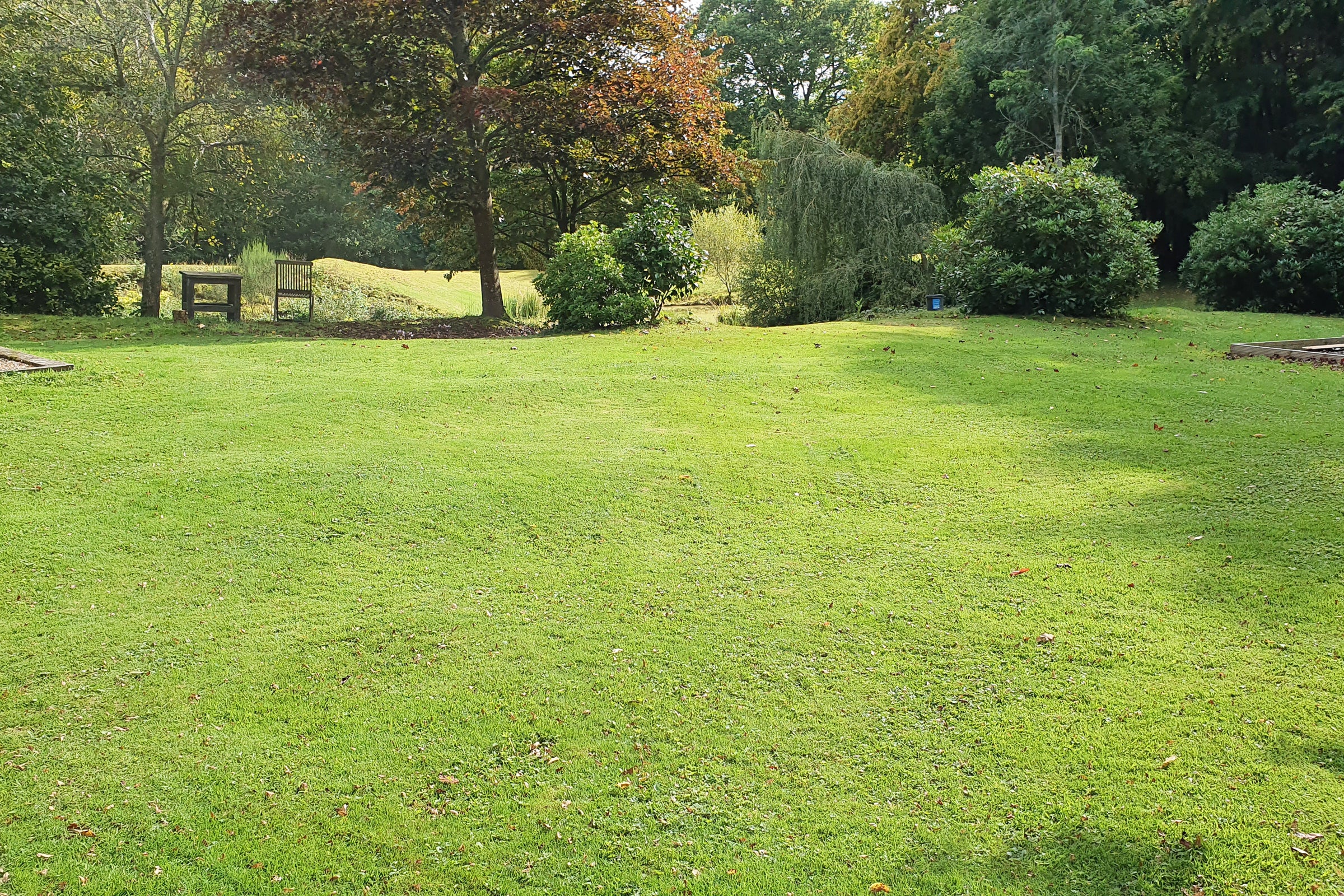 Tufty areas caused by the initial 25-hour run-time disappeared in a few days, save for a small area around one corner of a square bed edged with decking boards. The iMow took a real dislike to address this area and, over the first few weeks, it had passed over it only once. That ratio continued for just this small area, which ended up being slightly more tufty than the main lawn. This was down to the odd combination of the obstacle being near a steep slope and a nearby bush, so it’s unlikely to be an issue for many. 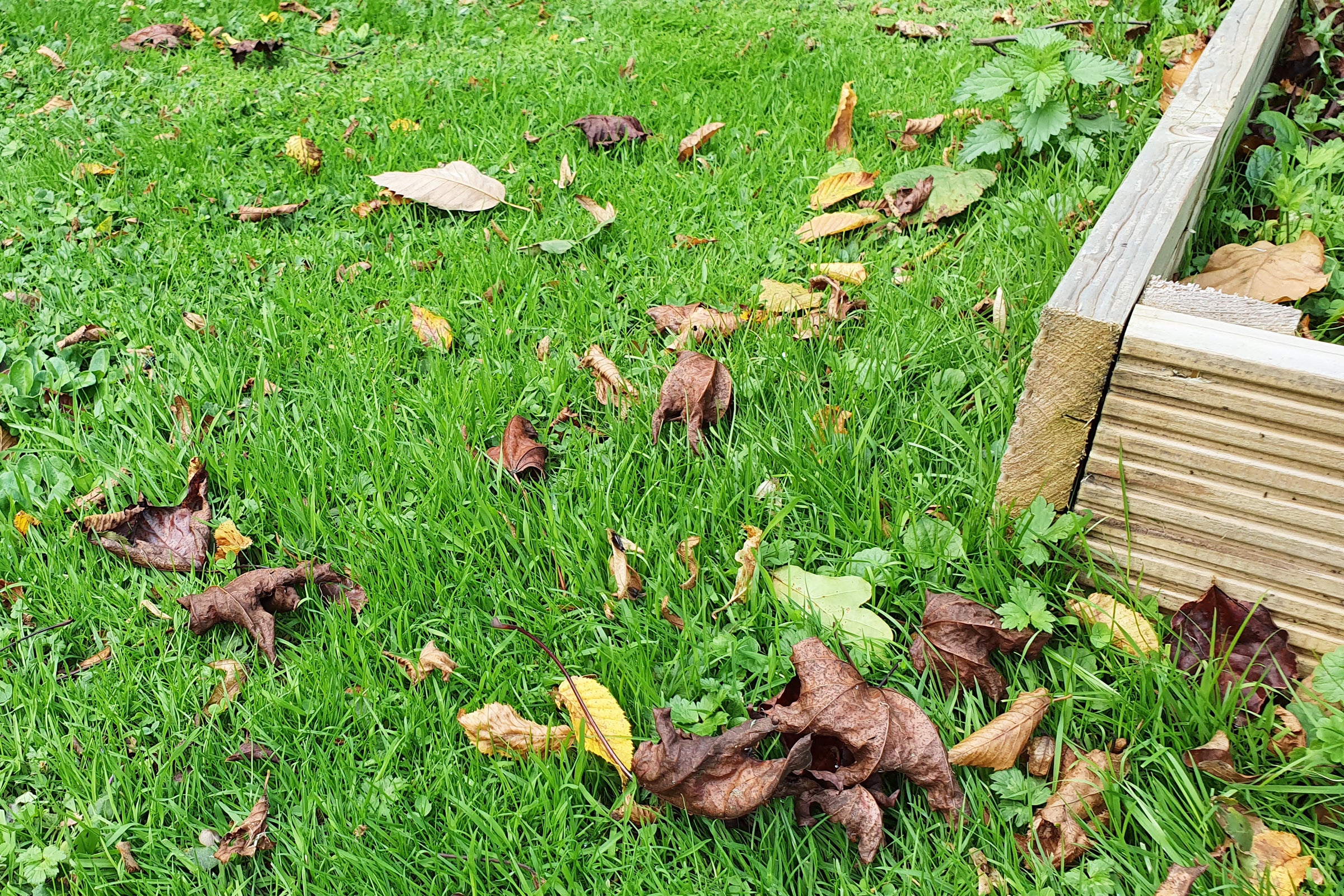 Overall, Stihl’s iMow RMI 422 PC performed exceptionally well over a couple of months’ testing towards the tail end of the summer. It really got the most challenging area here to deal with and, despite requiring some setup fine-tuning over the first few weeks, it performed faultlessly. It delivered beautifully trimmed grass all the time, and a fabulously flexible and fun app if wanted to get involved.

Yet its key strength is you not having to get involved at all. Simply set up the iMow, fine-tune it a little over the first few weeks and it will reward you all summer long with lush, well-mowed grass for near-zero user input and spectacularly low running costs. Add to this its compact size, relatively affordable asking price and five-year guarantee as standard, and we think the iMow RMI 422 PC is the best mid-sized robot mower available.

The Stihl drew something of a short-straw when it came to testing areas, put in charge of a very complex 800sqm of the lawn as other ‘bots were on test in the flatter areas. The perimeter shape of the area was complex, and it incorporated an entire gamut of obstacles from trees, flowerbeds, a boggy area and short, sharp slopes that peak at well over the RMI 422 PC’s 40% climbing claim.

While most mid-sized mowers tend to simply charge on through when it rains, the Stihl uses a combination of sensors and weather data through the app to time its grassy assaults in the ideal driest conditions. We couldn’t easily observe how well this worked regarding the weather data from the app, but it certainly had no truck with going out in the pouring rain, alerting you of such if rain stops play.

Throughout the summer months, it was impossible to fault the RMI 422 PC’s performance across navigation, cut finish and efficiency of coverage. Despite the challenging terrain, it was only over-night rabbit holes that stopped it in its tracks – and only then if they were big enough to swallow a front wheel. If it did become stuck, it simply stopped and called for help via the app – as opposed to simply trying to drive out and chewing up the turf in the process.

Noise was very low for a bar-bladed robot, measuring a peaceful 49dB from our sun-lounger at 10m away. Stihl suggests the sound is nearer 60dB, measured at 1m distance, but we like to test more real-world scenarios. Similarly, being pounced on by the dog and turned over by an inquisitive visitor didn’t phase the Stihl. It simply stopped immediately and sent out an SOS via the app.

After a month of hard-core, high energy testing, we had all but forgotten the Stihl was in action. The challenging lawn looked great and, aside from moaning about the weather, we barely heard from it. It just got on with its job silently and seamlessly. The increased working hours also resulted in much smaller mulch clippings, which disappeared into the thatch immediately.

It wasn’t until the rains came in hard in October did the RMI 422 PC start to struggle with the terrain. The muddy area beneath trees caused the tread pattern of the hard-plastic tyres to fill, turning them into slicks. We cleaned them out a few times and moved the perimeter wire away from the worst mud, but the sticky clay soil here soon returned to fill the treads. Ironically, that didn’t faze the Stihl over the flatter areas, but it did start slipping on the steeper slope. 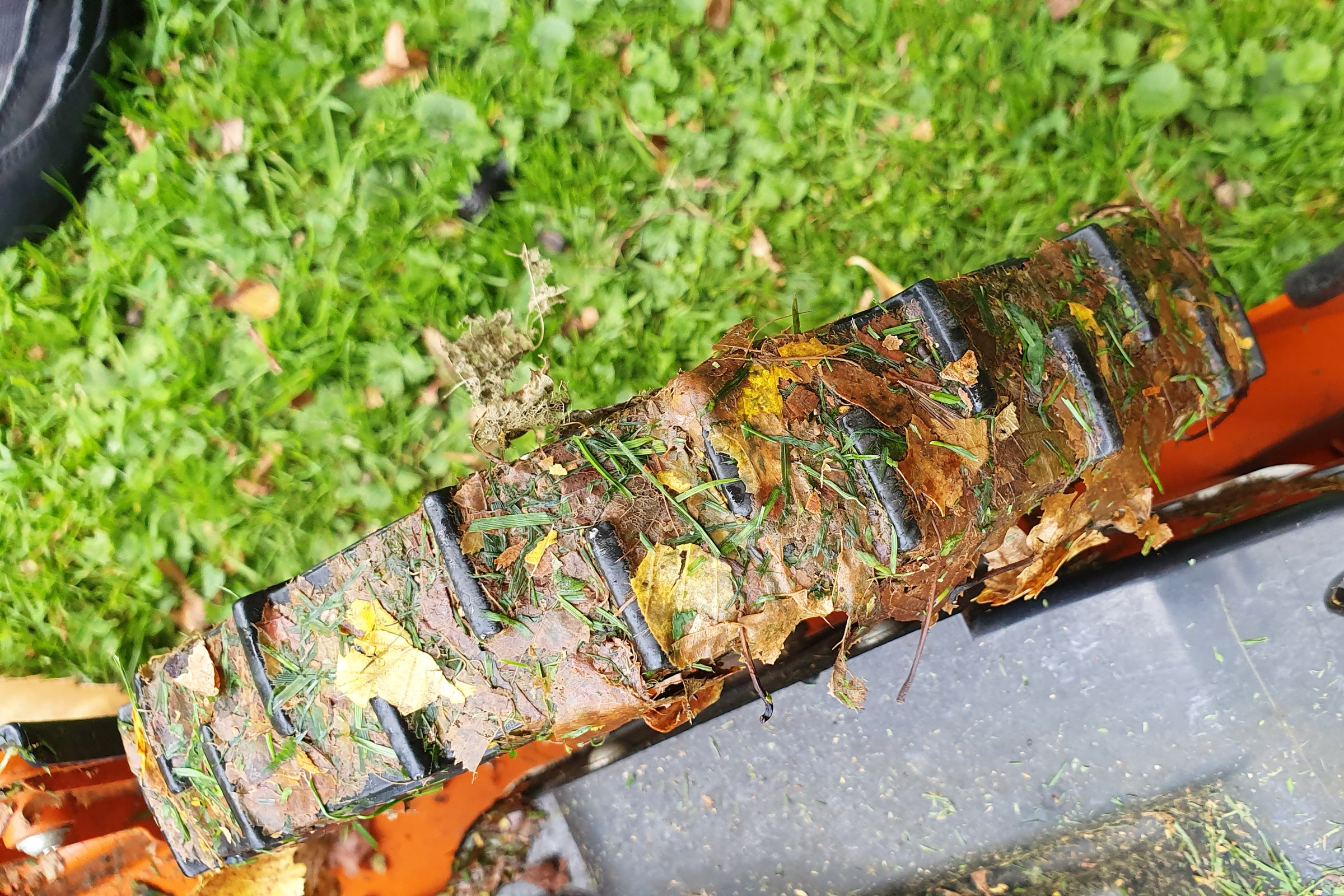 Even budgeting for professional installation (often included in the full price), the Stihl looks pretty good value for a mid-sized premium brand of mower loaded with tech features and goodies that really work. The running costs are a fraction of petrol or even an electric push mower. Factor in the superb all-round performance and the peace of mind of a five-year guarantee and we struggle to think how Stihl could tick any more boxes.

Should you buy the Stihl iMow RMI 422 PC Robot Mower?

If you’re looking for a compact, quiet and well-specified mower for mid-sized lawns, the iMow 422 PC is a cut above the rest. We’d have liked electronic height adjustment, and it doesn’t like thick mud in winter, but that’s the entire extent of our criticisms. The dynamic random-pattern mowing works brilliantly to ensure all-over coverage, the app is fully featured and easy to use, and the blade can be sharpened to further reduce the already near negligible running costs.

Comfortably handling lawn up to 1700sqm with fairly steep slopes and a plethora of challenges and obstacles, the iMow delivered a clean and crisp cut with near-zero user input all through the summer.