What is the Stihl BGA85?

With a very powerful output, cordless battery operation and variable speed, the Stihl BGA85 is among the most high-spec leaf blowers you can currently buy. This does inevitably come at a premium, but if you simply want the best then this is the blower for you. Read on to find out why. 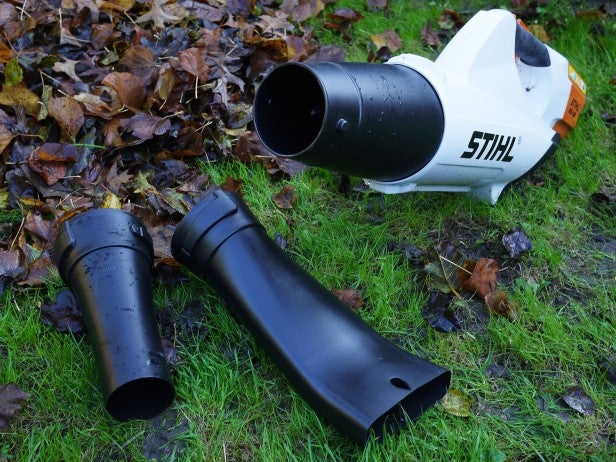 The first notable thing about the Stihl BGA85 is that it’s battery powered. Stihl only claims a battery life of 23 minutes so professionals and those with particularly large gardens/orchards will still be better off with a mains or petrol powered unit, but with the power this thing possesses 23 minutes is still a lot of leaf clearing potential. Plus, by charging a spare battery while you use the first you can at least double the practical usage time.

What really marks this leaf blower out, though, is that its battery powered portability doesn’t come at the expensive of power. This thing still has a whopping 650 m3/h sustained air throughput (845 m3/h max) with an air speed of 46m/s, which is on par with mains and even petrol powered models. 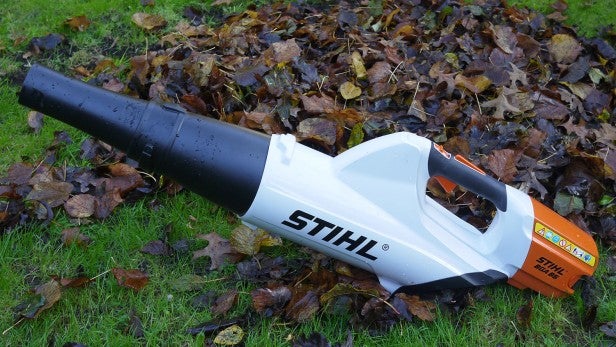 Making this model even more versatile is that the massive power output is variable, with an analogue trigger used to vary the speed. It’s not a token level of variance either, rising right the way from nothing through to full blast – some models offer variable speeds but don’t drop all the way down or offer full linear control.

The controls are also expertly designed, making this one-handed device effortless to operate. The trigger sits on the underside of the handle where it’s easy to reach with your first couple of fingers and its action is gentle enough to not make it tiring to keep held down.

Meanwhile on the top edge is a stiff sliding lock switch to keep kids from easily operating the device and a safety button that needs to be pressed down to activate the trigger. The latter is again effortless to use as it simply gets pressed in naturally as you grip the handle.

You get two types of nozzle included with the Stihl BGA85, with one having a straight-cut circular end and the other having a flattened and upward curving design. The latter is the default one for leaf blowing, where you want a wide and as horizontal a jet as possible, while the former gives a more direct powerful blast. Switching between nozzles is a bit awkward as you have to twist them to unlock them and they are a bit stiff. 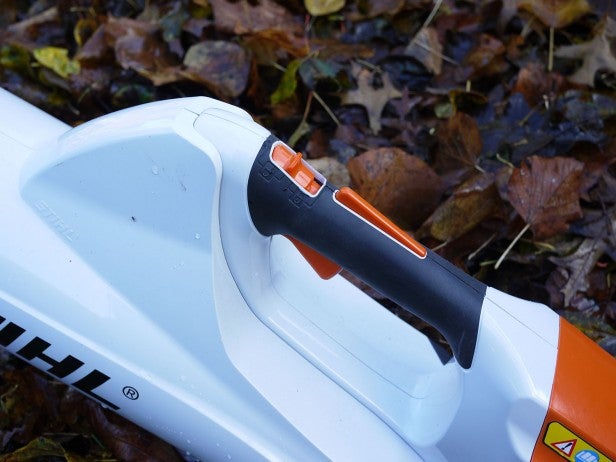 The unit itself may be portable but it is large, weighing in at 3.2kg and measuring 100 x 30 x 15cm with the nozzle attached, and its length only drops to 80cm with no nozzle attached. For a single purpose device – i.e. one that isn’t also a garden vacuum – this is quite a lot of bulk. However, it largely carries itself well. A notch on the bottom edge allows for easy hanging up, the lack of a cord makes it easy to put away and the positioning of the handle and controls makes it very easy to handle.

The battery pack is a massive 36V, 178Wh unit that weighs 1.7kg! It slides into a recess at the back where it acts as the counterbalance for the rest of the blower, all of which sits in front of the handle. Sadly, no battery is included with the BGA85 and nor is a charger, making the total cost of getting a basic blower/battery/charger setup a whopping £475, going by Stihl’s MSRP. At least the battery and charger are compatible with other Stihl products. 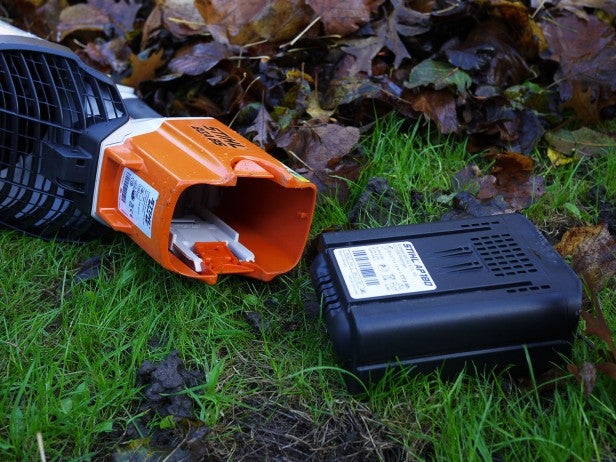 The BGA85 is quite simply a joy to use. The convenience of its battery power means that, assuming it has some charge left, you can simply pick up the device and go. There are no cables to plug in, petrol tanks to fill, collection bags to attach or hoses to rearrange (unlike with multi-purpose devices). You just press the trigger and go.

The balance and poise of the unit is also quite superb. It could perhaps do with a second handle to take the strain when at full power but for the sort of sub-half hour jobs it’s designed for it’s superb.

The sheer power on offer is also impressive. Clearing our 40m2 test lawn of its 3kg of damp leaves took just a handful of minutes and it had no problems digging out stubborn leaves stuck in the grass. We measured its effective clearing range as up to 6.5ft, which may not sound much but when you’re dealing with a volume of heavy, wet leaves it is a very good mark that again puts it on par with mains powered machines. 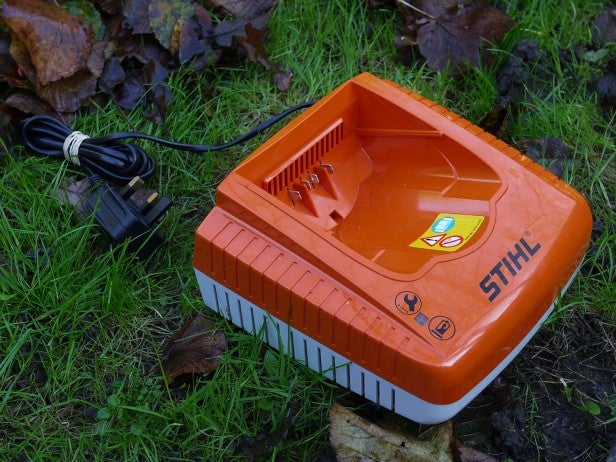 This brute force can also be controlled very easily with that trigger, making it really easy to not only stop and start as you manoeuvre around your garden but also makes this suitable for use round more delicate vegetation and potentially even for indoor dusting – there are few easier ways to dust a book shelf or clear your garage of saw dust and cobwebs.

Inevitably this is a noisy machine but with a peak noise level measured at 82dB (measured at head height, holding the tool in normal position to the side) it’s among the quieter models of its level of power, with some other models reaching 85dB. Being electric it is of course quieter than petrol models too. At an approximate minimum speed (it’s difficult to hold the trigger at exactly its minimum point consistently) we measured the sound level had dropped to just 60dB, so you can easily do lighter tasks without disturbing the neighbours too much. 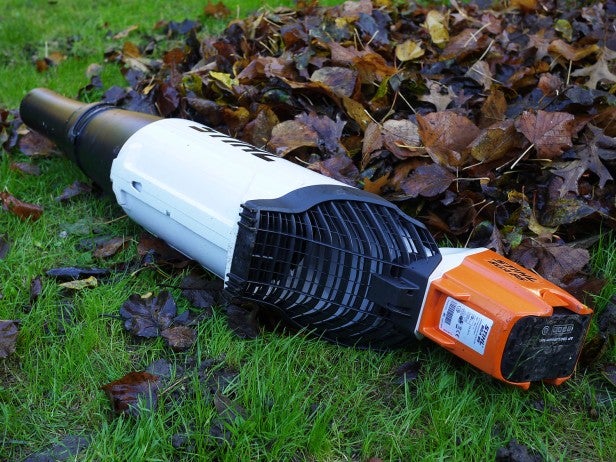 Should I buy the Stihl BGA85?

The Stihl BGA85 is quite simply the finest handheld leaf blower we’ve ever used. Its combination of sheer power, with accurate controls and battery power portability makes it utterly effortless to use. Its battery life doesn’t quite make it suitable for really big gardens without either investing in multiple batteries or being willing to wait half an hour between sessions. But the power it offers means you can get a hell of a lot done in those 23 minutes.

The only downsides are that it is quite bulky and very expensive for a single use tool. Weaker battery powered units are much more compact and lightweight while Stihl’s own mains powered combined leaf blower/garden vacuum is nearly half the price of the BGA85. Other battery powered models do also come at a premium but the BGA 85 is still around twice the price of most competitors. This is a premium product and you really do pay for it.

If you’re simply after the ultimate handheld leaf blower then this is the one to get. It’s powerful, versatile and effortless to use. However, it is quite large and very expensive for a device that’ll still require you to bag the leaves up manually.

Stihl doesn’t stock its products in the big-name DIY/garden centres
but rather works with specialist retailers. For a full list of UK
dealers head to the Stihl website.