SteelSeries’ (SS) design philosophy has always been to create true gaming tools for professional and enthusiast level gamers. Eschewing the gimmickry and pointless flashing parts of many of its competitors, SS instead talks to the people that play games and asks them what they need from there peripherals and goes ahead and creates something to fit those requirements without adding anything superfluous. Such was the methodology used to create the mouse that we’re looking at today, the Xai. 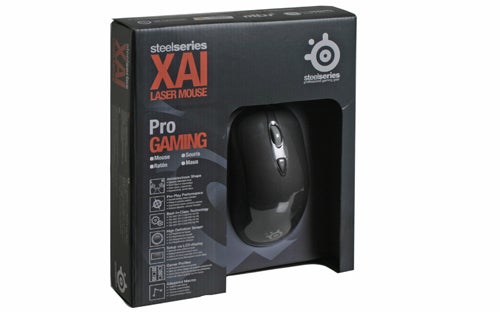 Carrying on from where the highly successful – and rightfully so – Ikari gaming mouse left off, this new model takes the hyper-sensitivity and customisation of its forbear and runs away with it, offering a sensing mechanism that can make 5,001 Counts Per Inch (CPI), take 12,000 Frames Per Second, and cope with 30G of acceleration, and movements of 150+ inches per second. You can also adjust the CPI all the way from 1 to 5,001 in increments of 1, select your polling rate, set your lift distance, and adjust all manner of other software-based mouse trickery.


It has a ambidextrous design that is very reminiscent of the classic Microsoft Intellimouse 1.1. In the hand it feels very comfortable and lends itself well to both fingers-on and palm-on grips (although if you don’t know what these mean, that won’t matter). In particular the slightly inward sloping sides and rubberised surface make the mouse easy to grip with just your thumb and little finger and it’s perfectly balanced so as not to tip forward or back when lifting and moving it. Mouse comfort is a highly subjective thing but overall we feel the Xai is about as good as it gets.

Build quality seems very impressive with pokes and prods being met with nothing less than absolute solidity. As is the trend, the cable is braided but we must say we’ve never found this to be any better than plain rubber cables. It is at least very long at two metres. SS also makes a point of it having gold plated connectors. We’re again not so sure that makes much difference though.


The only cause for concern, with regards build, then, is the rubberised coating. While it feels lovely, these coatings do tend to rub off over time leaving little bald patches where your fingers sit. In particular this can affect where you grip the mouse on the sides. It could take some time, but I’ve had mice that have started to deteriorate in these sections within months. This isn’t a complaint exclusive to SS but the Razer Mamba is one mouse that dealt very well with this problem by having thick rubber sections on the sides. 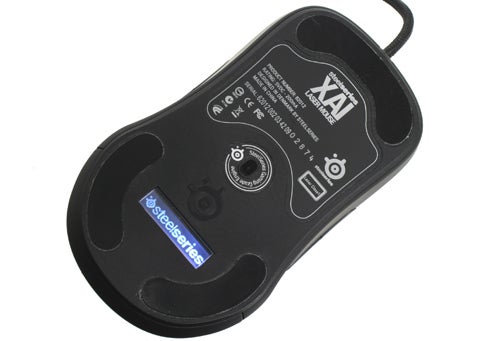 Three large Teflon glide pads are used and, combined with the mouse’s low weight, they provide exceptionally smooth and quiet movement. Incidentally, there’s no weights system in this mouse as it’s something that none of the gamers SS has talked to use. We couldn’t agree more that weights systems are next to pointless so kudos there for not adding cost with unneeded features.

As well as your standard left and right buttons flanking a central button and scroll wheel, two buttons also sit either side for your thumb or little finger to operate. For me at least (and presumably for the majority of people, considering the amount of research SS put into this mouse) these side buttons fall perfectly into a position just above where you grip the sides of the mouse thus making them easy to find when needed yet not easy to accidently press. Likewise the scroll wheel and the middle button are easy to reach yet don’t get in the way in the heat of battle. All the buttons have a lovely light but positive action and respond instantly with no delay between pressing the outer surface and the micro switch being activated. 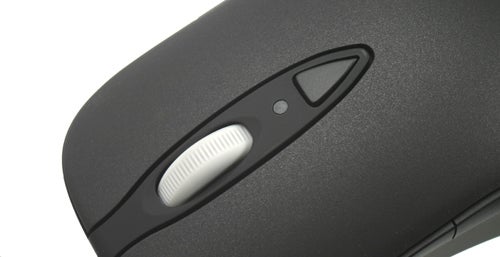 The scroll wheel has a fairly deep rubber finish with a fine set of lines cut into it for easy grip. It has a notched movement and is very lightweight, making for very accurate scrolling – particularly useful when selecting weapons in Counter-Strike, say. This does, however, mean that you can’t flick the wheel to scroll rapidly through long documents like you can with weighted wheels as on the Microsoft SideWinder X8. This is largely made up for by how easy it is to press the scroll wheel button without jogging the wheel, though.


Below the scroll wheel sits the CPI switch which lets you change between two pre-set CPI levels – the LED above the button indicates which setting you’re currently running. This may sound like a fairly limited system compared to some gaming mice but, after talking to many gamers, SS realised most people seldom use more than two CPI settings per game and more often, in fact, use just one. As such SS lets you choose exactly the setting you require for each of the two levels and you can just switch between them. Incidentally CPI is what SS uses to refer to the more common DPI (Dots Per Inch), as SS feels DPI is misleading nomenclature. 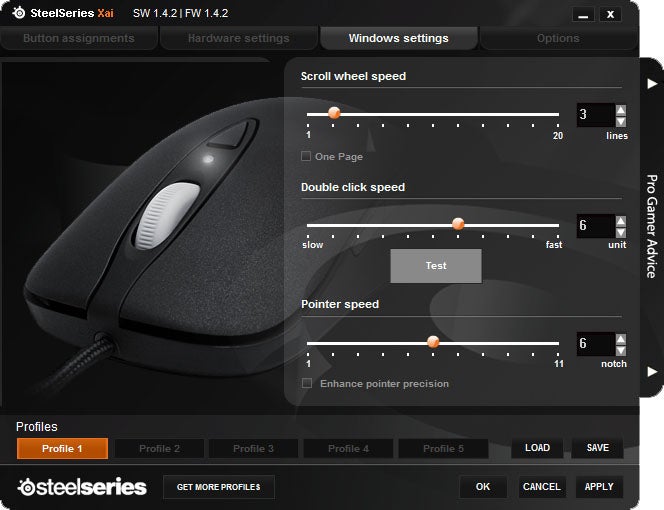 Part of the SS CPI philosophy is that you should set your Windows mouse speed setting to half way along the scale (position 6), which corresponds to a nominal level of one. Likewise you should set the mouse speed of whatever game you’re playing to one. By doing both these things you avoid any software interpolation meaning that whatever CPI you set on the mouse is exactly what you get on the screen. This is why you can control the CPI level so exactly; as it’s the only adjustment you should make.

To change CPI levels you must use the new and improved version of the LCD that debuted on the Ikari and is situated on the under side of the mouse. While on the Ikari this simply displayed the CPI setting you were currently on and let you adjust it by holding down the middle button and rolling the scroll wheel. This new version enables you to control almost every aspect of the mouse. 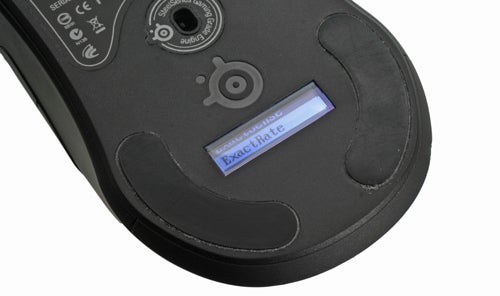 To activate the LCD, you hold down the middle button until the menu appears. From here you can select (by rolling the scroll wheel) from 5 different profiles, save your changes, load the default settings, or exit the menu. Go into a profile (by pressing the scroll wheel button) and you can select whether to use that profile or change one of the ExactSense, ExactRate, FreeMove, ExactAim, and ExactAccel settings for that profile. 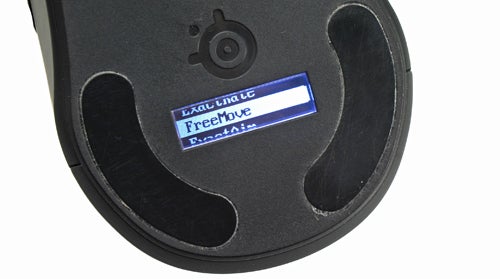 ExactSense refers to the CPI settings while ExactRate lets you choose the polling rate of the mouse, which is adjustable from 125Hz to 1,000Hz. Polling rate is the frequency with which the mouse reports movements to the computer and, according to SS, synchronising it with a multiple of the lower of either your game or monitor refresh rate gives a smoother response. So, for instance, if your monitor refresh rate is 60Hz, you set the rate to 600Hz, or 960Hz, or some other multiple of 60. We must admit to being unable to detect the difference this made to our gaming but the options there for you to play with should you need it. 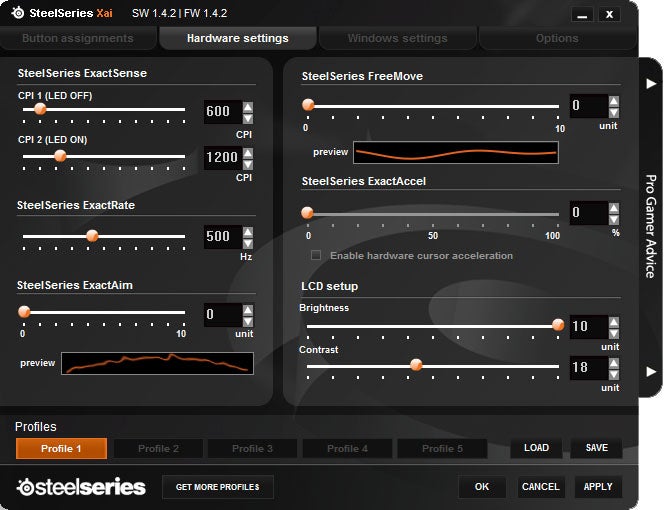 FreeMove let’s you adjust the path correction applied by mice. This is a technique used to help keep the pointer moving in a straight line when the computer predicts that’s what you’re trying to do. This is useful in everyday computing where you may want to draw perfectly horizontal or vertical lines but while gaming it can seriously affect your accuracy. The Xai lets you adjust the level to which path correction is applied with an arbitrary scale of 0 to 10.

Next up is ExactAim. This refers to the level of jitter correction and movement prediction being applied by the mouse. These things are applied if you’re using a poor mousing surface that the mouse has difficulty reading, causing the cursor to skip about and give spurious results. By turning them up you can calm the mouse down, so to speak. Keeping it set to nought just uses raw sensor data giving you the most accurate response from you mouse. If you’ve invested in a decent gaming surface then you shouldn’t need to adjust these settings from the default level of 0.


Finally we have ExactAccel, which as you can imagine lets you apply acceleration to your mouse movements. It’s thankfully turned off by default. 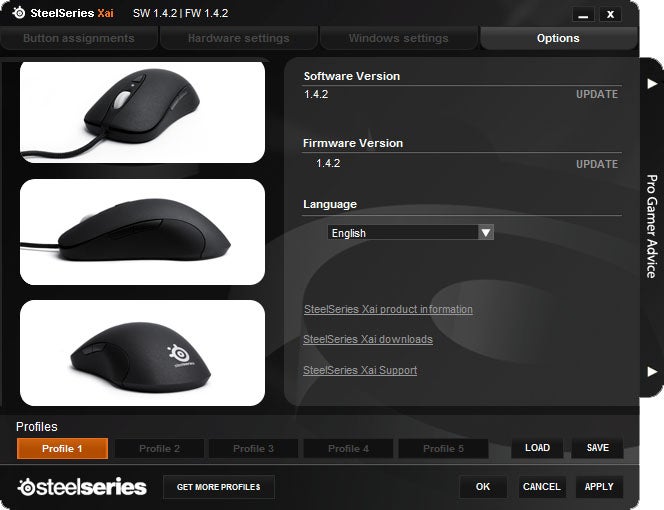 The advantage of this on-mouse setting system is that you don’t need any drivers on your PC to have all this exacting control and you can take your mouse and its settings with you wherever you go. It is a little tedious to setup on the device but once you’ve adjusted each profile for each game it’s quick and easy to switch profiles and even the CPI switching is the quickest and easiest we’ve ever encountered. If you really don’t fancy doing all that scrolling though, you can install the drivers and adjust all these settings through that interface instead.


Also through the software, Windows mouse settings like scroll wheel speed, and double click speed can be adjusted. In addition you can change button assignments and record macros for all buttons except left-click. The software is nice and lightweight and very clearly laid out so, even though you don’t need it and you may like to keep your PC clutter free, it’s very much worth installing.

Overall performance of the mouse is utterly class leading with it tracking incredibly well on a variety of surfaces including hard and soft mouse pads, plastic laminate worktops, shiny plastic coated cardboard, and paper, though clear plastics and glass do defeat it. Being an old-school Counter-Strike player, this was my test game of choice and, though it didn’t make a marked improvement to my scores (such differences would require 10s of hours of gaming to come to light), it did perform flawlessly. No matter hard and fast I flung about my in-game character, the Xai kept up accurately and instantly.


While other mice have features that we like, such as free wheeling scrolls wheels and hybrid wireless and wired designs, the Steel Series Xai is quite simply the best pure gaming mouse we’ve ever tested. Rather than tack on gimmicks like flashing lights and weight systems, Steel Series has simply taken the basics of a performance mouse and honed them to perfection. Despite being ambidextrous it’s incredibly comfortable, tracking is exceptional, and the level of customisation on offer puts other mice to shame. Considering you can buy one for just £50 we cannot recommend it highly enough.