A few weeks ago we had the pleasure of a visit from some of the folks behind Steel Series, the defacto standard ‘pro’ gamers’ choice for keyboards, mice, and gaming surfaces, who were here to demonstrate some of their latest products. As well as new keyboards and mice, which we hope to be taking a look at very soon, the company also had a new headset it was keen to show us, the Siberia Neckband. 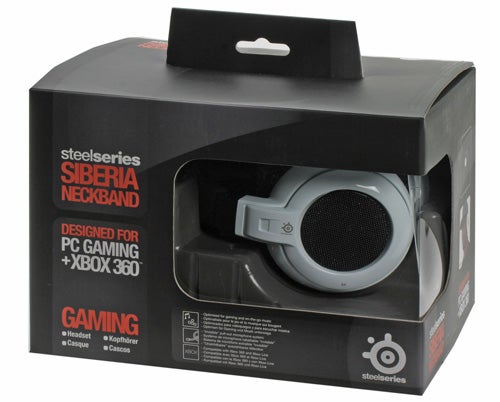 As the name suggests, the key selling feature of the set is the headband that, rather than resting on top of the head like a conventional headset, wraps round the back of the neck, in what’s apparently called a circumaural manner. The reason for this method of retention is not some profound discovery that it makes you a superior gamer or that the reduction in scalp pressure prevents premature hair loss, but simply that they seem to be the fashion. Indeed, a third of gaming headets sold in the US are apparently of the neckband variety. Maybe it’s because they’re more compatible with hats? 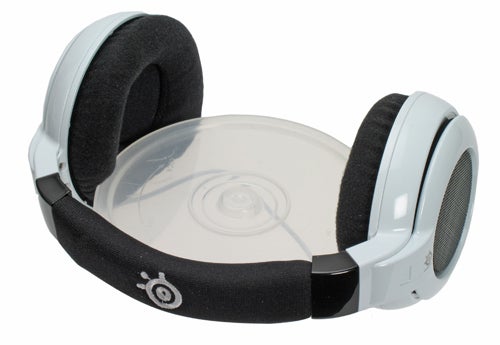 Either way, if you prefer the idea of a conventional headband, Steel Series also offers a number of other alternatives from the same range like the Siberia Full-Size Headset and Siberia SK USB Headset. These both use identical speakers to the neckband set so sound quality should be identical and the choice is merely a matter of preference.


Considering their fairly high price tag, it comes as no surprise that the Siberia headset came well boxed with a full set of high quality accessories. For a start there’s a compact inline passive volume control, which also acts as an extension cable. The cable on the headset itself is only 125cm long, which is fine for use with an mp3 player but would struggle to reach round the back of your computer. The extension enables you to add another 165cm to this, giving you plenty of slack to play with. 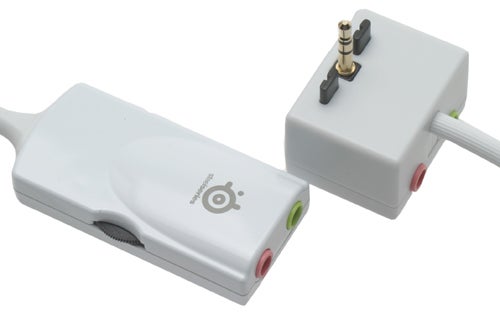 One of the things that particularly excited me about the Siberia headset is its inclusion of an Xbox 360 headset adapter. What’s great is the headset provides a long cord for taking the audio signal from your TV and piping it to your headset so you can enjoy great quality audio without disturbing your neighbours. The microphone and headphones can then be used to replace the usual in-game chat functions of the standard 360 headset.

Unfortunately the size of the adapter plug prevents it from connecting to our Guitar Hero III guitar so we weren’t able to use it in conjunction with this game. Of course, you could argue that it’s near sacrilegious to play Guitar Hero without disturbing the neighbours so there’s no need for a headset when playing it and there’s also little cause for chatting over Xbox Live while playing the game. However, if either of those activities did appeal, let it be known you won’t be doing them with this headset.

To don the headset, it’s a simple case of pulling the earphones apart and letting the sprung band pull the phones over your ears. The phones themselves envelope the whole ear with large rings of soft padded foam doubling up as cushioning and providing the gripping point that hold the set on your head. At first the fit is very comfortable and a couple of hours of gaming could pass without them troubling you. After longer periods, though, the weight of the set does begin to put pressure on the tops of your ears making them uncomfortable. Passing the set round the office, this was a problem we all experienced so it’s not just my strange shaped head or slippery long hair causing the problem.


Unfortunately there isn’t really a solution to this and it’s really a case of whether you plan to use this headset just for occasional gaming or if you fancy using them as more of an everyday headphone. For the former you shouldn’t be put off by the comfort issue but for the latter you may want to stick with a traditional headset. At the very least, trying before you buy would be highly advisable.

The microphone is attached to a flexible stem that stows away completely into the left cup, where it’s discrete enough to go unnoticed, making these a truly practical everyday headphone as well as gaming headset. When extended it can be bent and twisted any way you choose and there’s sufficient length to accommodate even the most idiosyncratic of microphone positions. Sound quality was also decent with my fellow frag buddies reporting a clear signal of sufficient volume to be heard over the din of roaring flamethrowers, exploding rockets and the rat-tat-a-tat of machine gun fire in Team Fortress 2. Obviously you shouldn’t hope to be recording your next masterpiece using this microphone but for general chat purposes it is more than sufficient.


Finally, we come to arguably the most important aspect of any headset and that’s the sound quality. Now I’ve had this headset in the office for sometime now and I’ve been listening to it on and off with a broad variety of music. Unfortunately due to the aforementioned comfort problems they haven’t remained my permanent office headphones but in terms of sound quality I would be more than happy to use them everyday. 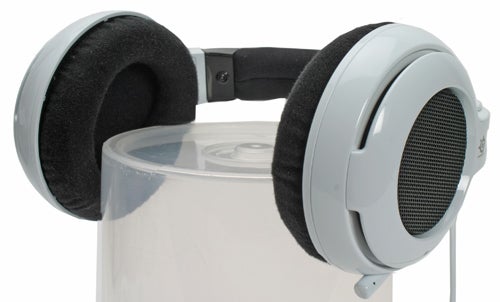 It goes without saying that they aren’t going to compete with true audiophile headphones, like the Grado LabsSR325i, and indeed I’d put them on a par with any other half decent set that you could get for around £50. However, what you do get is a set that can cope well with the full spectrum of sound and will do considerable justice to the poppier side of your listening tastes. Classical, acoustic, or just generally more subtle genres do suffer from a slight lack of clarity, which isn’t helped by the bassier leanings of the overall sound. Also, the open back design does little to block ambient noise so quieter passages can easily be swamped by street/office/train noise.


For gaming, and in particular LAN gaming, the design works perfectly, though. The strong bass adds real depth to explosions and other atmosphere building ambient noises, while the open back design allows you to chat to your friends without missing a beat while playing. Also, the neckband design has the added side effect of creating a very compact set of headphones making them all the easier to carry around with you. As a gaming headset, they really can’t be faulted.


Although I found the neckband design lead to slight discomfort after extended periods of listening, ultimately whether you choose a neckband or headband retention mechanism is a personal preference and you should really try before you buy. What isn’t without doubt, though, is the Steel Series Siberia range of headsets are the perfect accompaniment to any budding gamer. The sound quality is as good as you would expect for the price, the microphone is clear and easy to use and the added extras make for a set that does everything you could possibly want of it.